Tourism operators and residents in five southern tourist destinations which may open up to foreign travellers next month are optimistic about the government's travel bubble scheme.

They are ready to open their doors again but on the condition the government implements disease control measures to guard against the re-emergence of Covid-19 in the kingdom.

The Bangkok Post talked to both groups after the Tourism and Sports Ministry recently proposed five islands -- Koh Samui, Koh Pha Ngan and Koh Tao in Surat Thani province, Phi Phi in Krabi and Phuket -- return to hosting foreign tourists as early as next month.

Currently, only a select group of pre-approved foreigners may enter the country.

The first countries allowed to send foreign tourists under the proposal would be those who have controlled the virus successfully in the eyes of the government.

Tourism is one of the sectors most seriously affected by the pandemic. As one of Thailand's main sources of revenue, the industry has been slated for hefty aid from the state.

As the government gradually relaxes travel restrictions, all five destinations famous for their beaches have expressed a readiness to welcome back tourists, despite many countries still fighting high infection rates.

WORSE THAN THE 2004 TSUNAMI

In Phuket alone, tourism generated over 420 billion baht from 10.6 million foreign tourists in 2019. However, from February to July 2020, a study by the Prince of Songkla University, Phuket campus, found Phuket will likely lose as much as 127 billion baht in tourism revenue.

President of the Phuket Tourist Association Sarayuth Mallam said the province is ready to welcome tourists as long as disease control measures are imposed.

"Sooner or later we have to reopen," he said. "If we wait until early next year, it may be too late ... what is important is that we continue to keep our guards up with clear measures and stringent disease screening."

Should the government allow foreign tourists to enter Thailand in August, they must come from travel bubble markets in Asia, Chalermlak Kepsap, Patong municipality mayor says, adding the pandemic situation in Europe must improve before its people are allowed in.

"We should not allow all nationals in yet. It is too scary … we can accept specific groups first such as business travellers, medical tourists and those with families in the area. Upon arriving, they must be screened for symptoms and quarantined," said the mayor.

Without foreign tourists, Phuket has diverted its attention to the domestic market.

Ms Chalermlak pointed out most Thai tourists still think Patong beach is too expensive and said she had urged local businesses to lower their prices and run promotions. Locals should also turn to agriculture more instead of relying only on tourism, she added.

Narong Phonladet, 50, a Patong local, said that without tourists the local economy was suffering more now than during the 2004 tsunami.

"We want the government to allow foreign tourists in but they must be screened for the virus at the departure country and quarantined in Phuket after arrival … but Phuket must have tourists. Without them, it dies," said Mr Narong. 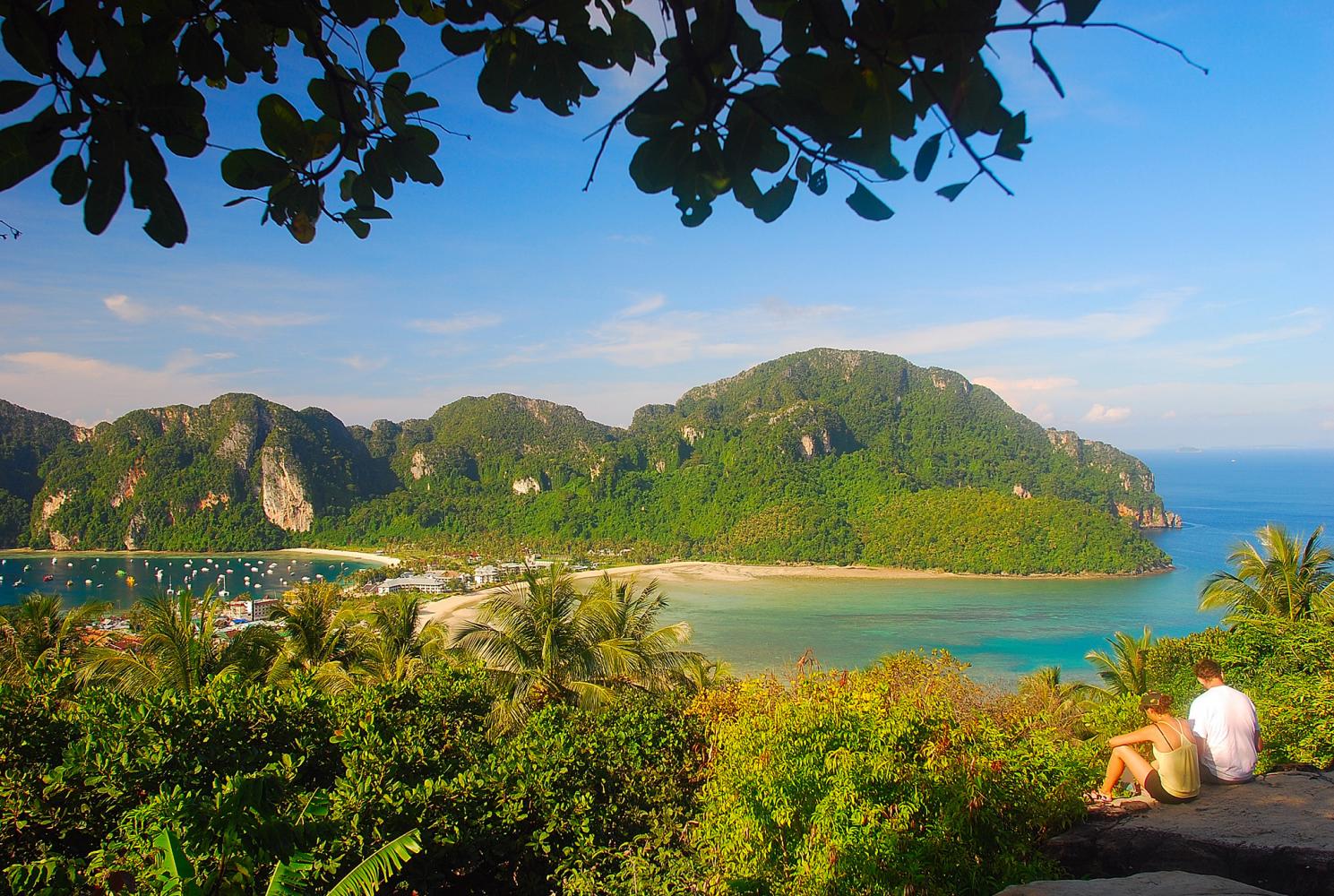 PARADISE FOUND: A couple sits on a hill admiring the beauty of Koh Phi Phi in Krabi which is expected to be one of the five southern islands to welcome foreign tourists again next month. The Ministry of Tourism and Sports last week asked the Centre for Covid-19 Situation Administration to consider its plans.

The resort island of Samui in Surat Thani province is a paradise for tourists all over the world and operators can "hardly wait for the reopening", albeit with some concern.

Worasit Phongkhamphan, president of the Samui Tourism Promotion Association, said the island will welcome back foreign tourists as long as there are strict regulations in place.

"Two charter flights -- one from Chengdu [in China] and another from Singapore will land on the island per day … Samui is already ready. Tourism authorities have sent questionnaires to people on the island for them to vote for or against tourism reopening," he said.

Mr Worasit stressed that as long as government policy is clear, local people will feel relieved to host foreigners once more.

This month, around 100 out of 600 hotels on the island are gradually resuming operations with many more expected to reopen next month if the government signs travel bubble agreements with other countries under acceptable conditions.

However, the president said many hotels were still unable to reopen since they had not yet received soft loans.

"It depends on all factors involved, such as how many tourists and which countries will be allowed in each day. As for Samui, we must consider a daily number of tourists that we can accept. I think a suitable number of air passengers flying to the island should not exceed 200 people per day."

Tour guide and tourism operator on Koh Pha Ngan, Manop Sae-tiew said the natural environment had been revived during the five-month shutdown. While Koh Pha Ngan, most famous for its full moon parties, is ready to welcome tourists back, many people remain wary, he said.

"We do not know who is coming. If they are infected and spread the virus to the others, how can we track the spreaders? We hope that government units will implement measures efficiently. We can't solely rely on village health volunteers."

Mr Manop suggested that frequent travellers should have a personal QR code so their whereabouts could be tracked. This might affect their rights but they would cooperate if they understand the situation, he said.

On the nearby Koh Tao island, hotel and resort operators are also preparing for guests, said Kosol Phongphadungkiat, the owner of Ko Tao Resort.

"Many resorts have gradually reopened. The rest on the island are expected to reopen in the high season, or from October to November. During this period, Thai travellers are returning at the rate of 20-30% and a lot of them are booking rooms for this coming holiday weekend."

Surat Thani province has instructed Koh Samui, Koh Pha Ngan and Koh Tao to maintain screening points in preparation for new groups of foreign tourists who will visit the islands from August. 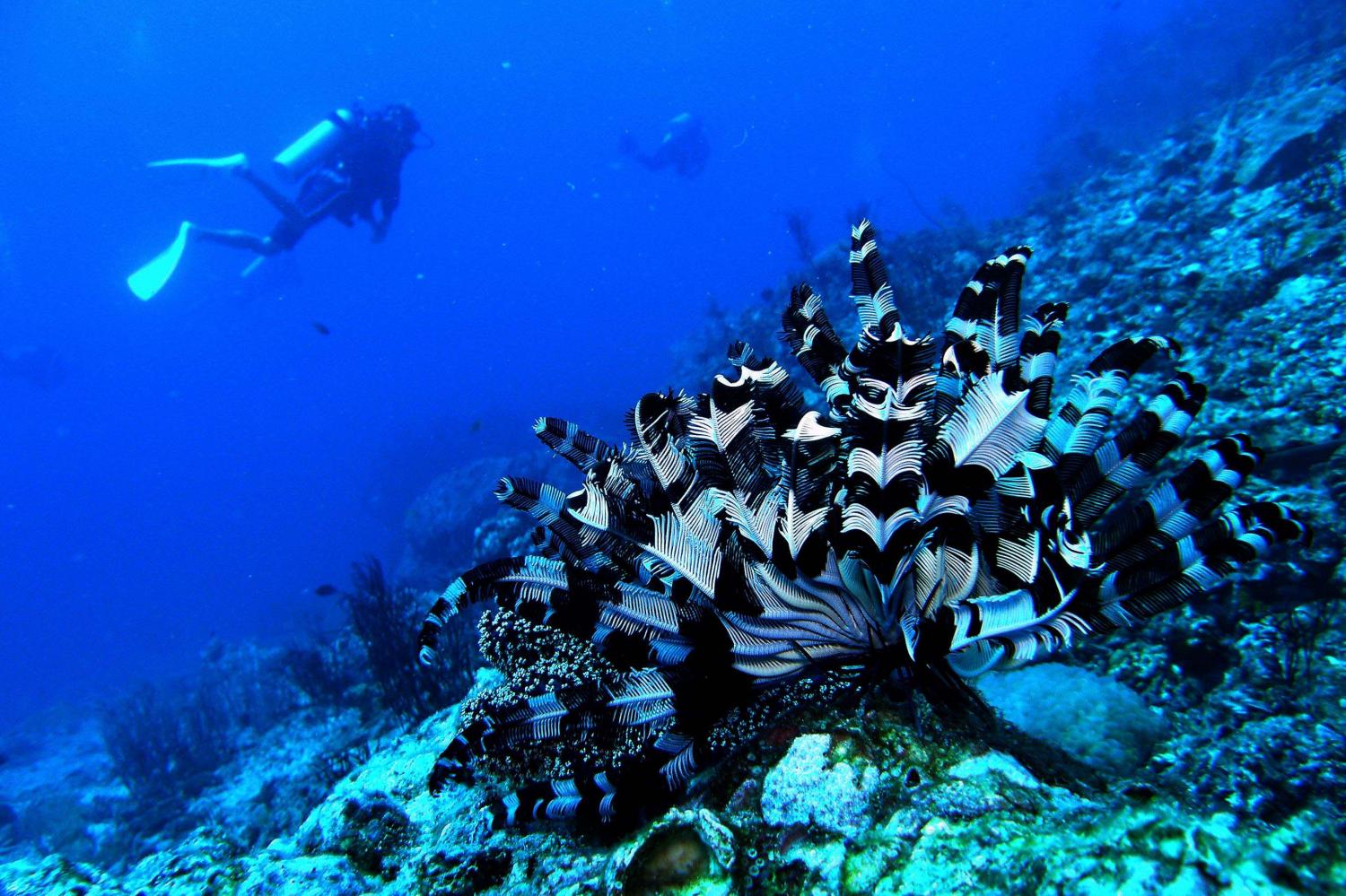 Seeing is believing: Divers explore the Gulf of Thailand near Koh Tao in Surat Thani province.

President of the Phi Phi Island tourism operators' club, Prasert Wongna, said the Covid-19 pandemic must be turned into an opportunity to tackle environmental problems on the island such as those caused by tour boats.

"Phi Phi people want the situation to return to normal as quickly as possible since businesses here have been closed for three months, which felt like three years," he said.

He suggested that "we must focus on quality tourists".

"We no longer want a lot of tourists like before as it harms the natural environment."

Meanwhile, president of the Krabi Tourism Business Association Wichuphan Srisanya admitted that allowing foreign tourists back in is risky but not beyond reason.

"Krabi Hospital has rapid diagnostic test kits that can produce results within three hours and the 'Mor Chana' application for tourists to register so that they can be tracked with Bluetooth.

"We are ready to welcome tourists but stringent conditions and measures must be in place," said Ms Wichuphan.

The tourism chief also relayed the local sentiment, saying that while everyone is afraid of a return of the virus, July will be the last month that the social security fund compensates people unemployed due to Covid-19.

"Some businesses can reopen and some remain closed to reduce costs," she said. "There are still no tourists. We must not forget that 70% of Krabi's revenue comes from tourism."

Suwannachai Wattanayingcharoenchai, chief of the Department of Disease Control, said his department is drafting guidelines for recreation and tourism so operators will know how best to prevent Covid-19 infections spreading among their customers.

Dr Suwannachai said tourists will receive a Covid-19 RT-PCR test at airports to make sure they are free from the disease, with results coming back within an hour or two while they wait.

He said the first tourists allowed to enter Thailand must be in tour groups so that authorities can easily monitor their movements while staying in the country.

As an additional precaution, initially, tourists will only be allowed to stay in one destination in Thailand with travel to any other provinces strictly prohibited, he warned.