The statue of Ai Khai wearing black glasses and military camouflage uniform — which are among popular offerings presented by the faithful.

The popularity of the legend of Ai Khai (egg boy) -- believed to be the spirit of a boy with the power to grant people wishes -- has increased dramatically in recent months.

While other parts of the country are still in the economic doldrums as a result of the Covid-19 pandemic, Ai Khai has worked miracles for the economy of Nakhon Si Thammarat as tourists continue streaming into the southern province to seek blessings from the famous statue of the boy at a local temple.

On Aug 15, tens of thousands of visitors from across the country flocked to Wat Chedi in Sichon district of the southern province where they scrambled for specially made Ai Khai amulets.

This plunged the temple into chaos, prompting its management to suspend trading of the amulets.

Interest in the story of Ai Khai had been growing after word spread that visitors to the temple had been granted their wishes -- such as lottery wins, business success, and the recovery of lost or stolen items.

Inside a pavilion in the temple's premises stands a wooden statue of a boy aged between nine and 10, which is believed to be where the spirit of Ai Khai resides.

Ai Khai's popularity has recently increased so much so that temples in other provinces are also seeking to cash in.

The main entrance of Wat Chedi, where the original statue stands, is adorned by plaster rooster statues of all sizes. An area is also set aside for visitors to light up firecrackers.

People who had their wishes granted follow the customary practice of setting off firecrackers and donating rooster statues to the spirit of Ai Khai.

Military camouflage uniforms, black glasses and slingshots are also among the most popular offerings presented by the faithful in return for the favours received.

The frequent deafening noise of firecrackers speaks volumes of the faith people have in the statue's spirit and its power to make wishes come true.

During the past few months, the temple has been packed with worshippers every day, particularly during long holiday periods.

It is estimated to bring in more than 300,000 visit each month, delivering a boost to the local economy and tourism.

As a result, Nakhon Si Thammarat has gained the highest amount of tourism revenue so far this year among 55 targeted emerging tourism provinces.

However, questions have been raised over whether this is just another passing fad similar to the look thep (child god) dolls back in 2016 or the Jatukham Ramathep amulets more than a decade ago. 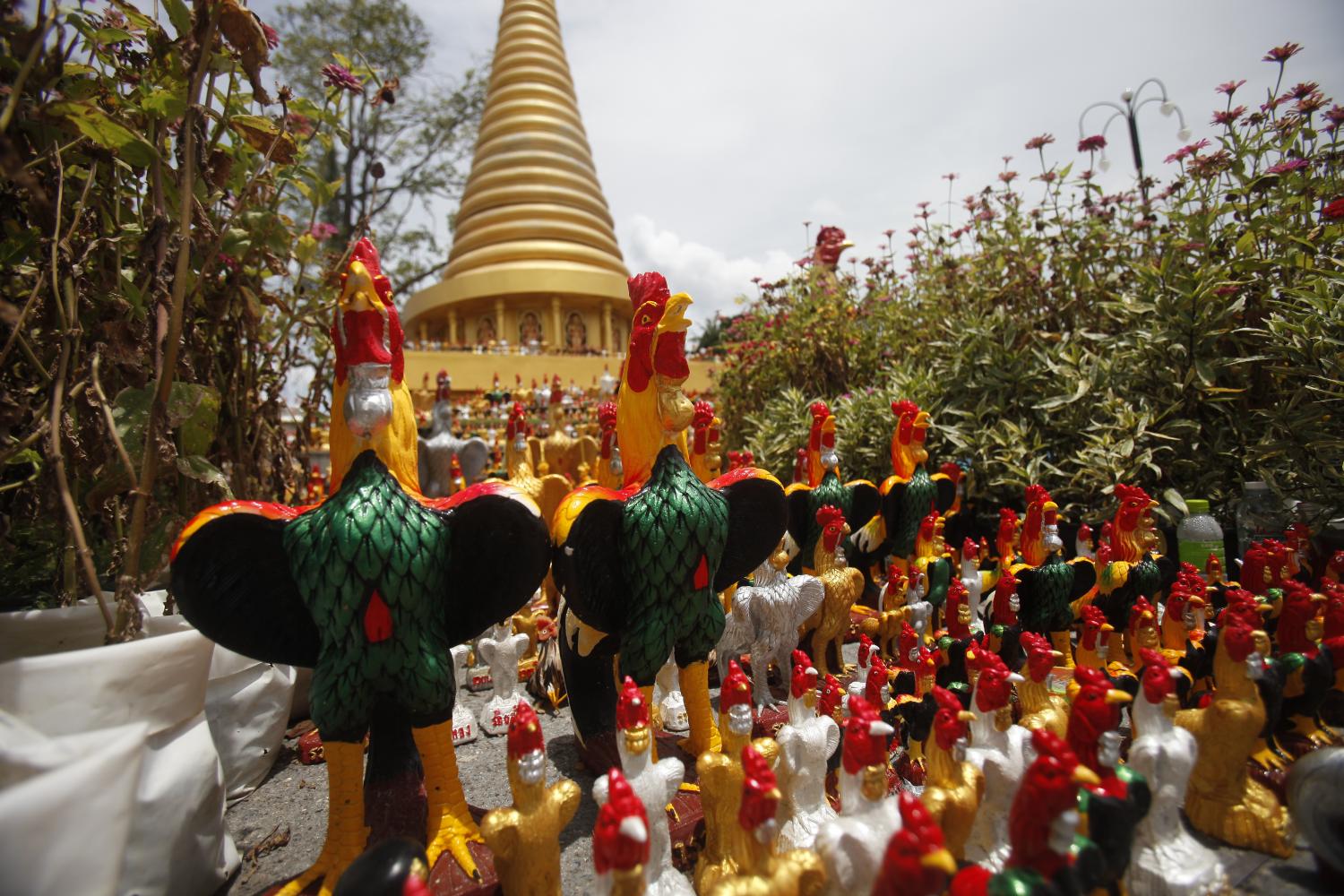 left  wish me well: Rooster statues of various sizes offered by the faithful for their wishes to be granted.

WHO IS AI KHAI?

Legend has it that Ai Khai was a young disciple of a revered monk from the South in the Ayutthaya period. The monk told the boy to guard a treasure trove at the place where the temple currently is located.

Unfortunately, the boy drowned in a nearby river, yet worshippers believe his spectral presence still lingers on in the temple's premises. Ai Khai is a common nickname used by people in the South for small boys.

Korakot Tetiranon, chairman of the Nakhon Si Thammarat chamber of commerce, said Ai Khai had put the province on the tourism map and breathed new life into the local economy.

However, he said the economic boom has been confined to certain districts rather being distributed evenly throughout the province.

Of a total of 23 districts, only five stand to gain from the economic windfall -- Muang, Sichon, Khanom, Tha Sala, and Lan Saka, he said.

Also, only the tourism, hospitality, transport and food and services sectors have benefited from the boom, whereas the agricultural industry in the province gains little from it, Mr Korakot said.

"As crowds have been drawn to the province over the past three months, local authorities have taken the opportunity to promote other kinds of activities, such as environmental and cultural tourism,'' he said.

Apart from paying homage to the Ai Khai statue at Wat Chedi, visitors can also visit other beautiful tourist spots in this southern province, he said. 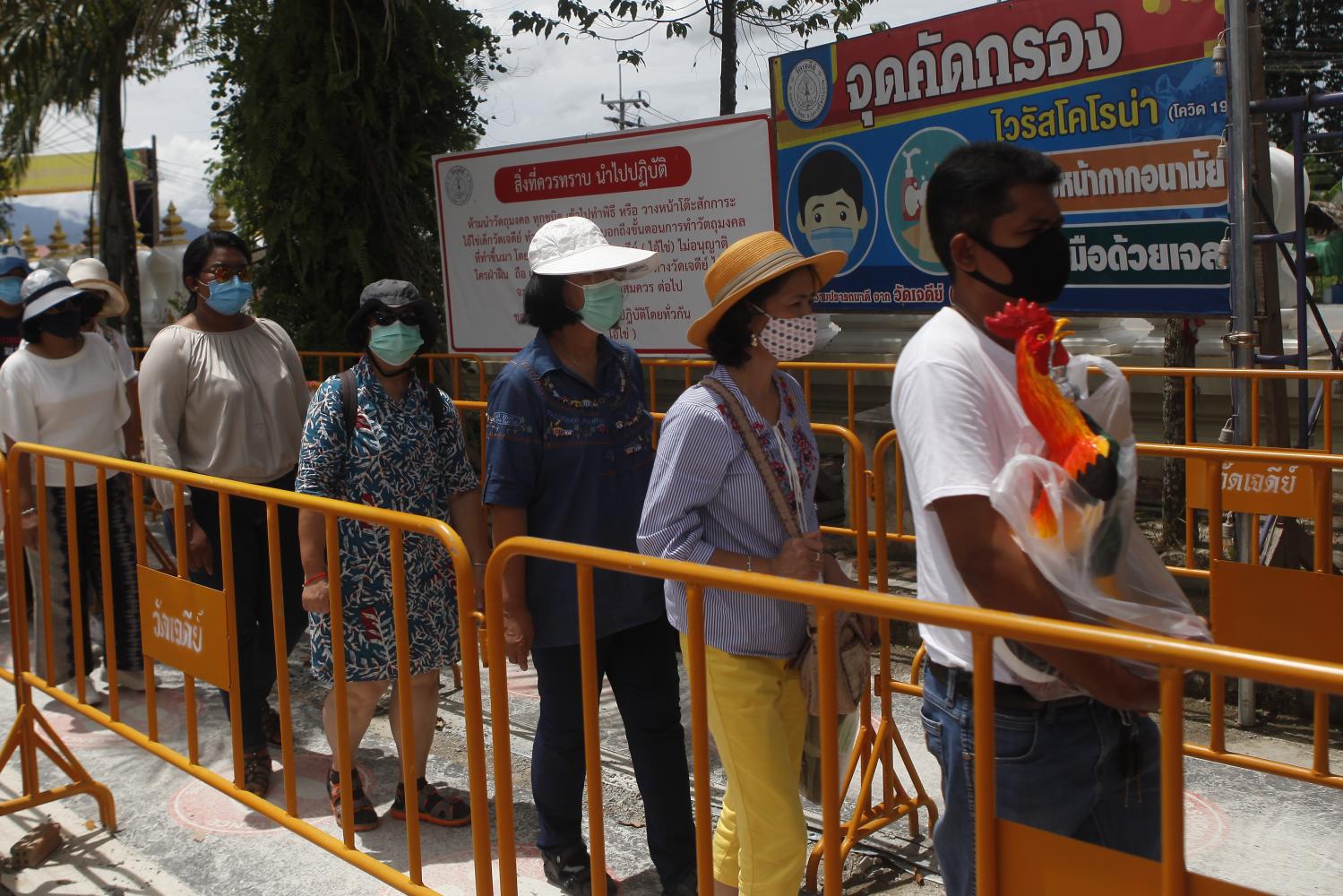 left  Good health, clear mind: Devotees queue to be screened for Covid-19. Their temperature is checked before they are allowed to enter a pavilion where the statue of Ai Khai is enshrined.

Responding to criticism that the Ai Khai's meteoric rise to fame will be short-lived and fade away as quickly like the Jatukham Ramathep amulet craze which also originated in the same province more than a decade ago, Mr Korakot said that circumstances are different.

In the case of Ai Khai, the temple has been able to manage incomes and their assets systematically and it has also worked together well with nearby communities.

"This is not an act of commercialising Buddhism. The temple has also pursued other good causes, too. This is different from the Jatukham fever which saw no control over the large-scale production of the amulets.

"At Wat Chedi, the temple management has a well-defined plan to handle the temple's assets. The original Ai Khai amulets can be obtained only at the temple and those seeking them must register and are only entitled to one amulet each,'' he said. 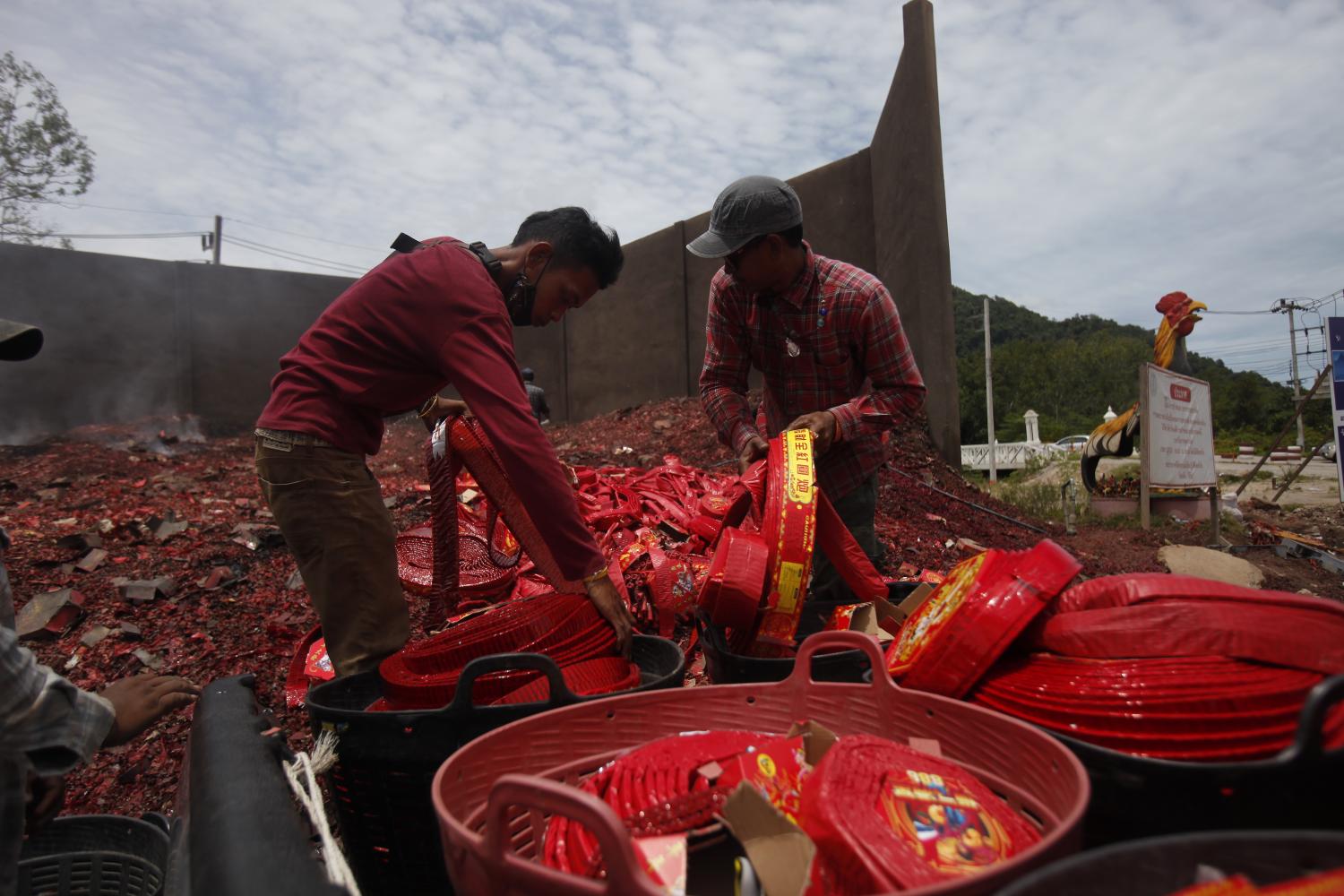 above  Thank the spirits: Wat Chedi staff members prepare to set off millions of firecrackers near the statue of Ai Khai inside the temple in a show of gratitude.

Pitsinee Thasniyom, director of the Tourism Authority of Thailand's Nakhon Si Thammarat branch, said that the Ai Khai fever has boosted the monthly number of visitors from 300,000 to the current 400,000 to 500,000.

During the long weekend from Sept 4-7, tourist spending was estimated at more than 800 million baht, with hotels, restaurants, and local businesses reaping the windfall, Ms Pitsinee said.

In the third-quarter from July-September, the number of tourists in the province rose by 9% compared to the previous year, she said.

Phra Khru Samutwatchara Phatthathammork, deputy abbot of Wat Rakhang Khositaram in Bangkok, sounded a note of caution, saying while it is not a crime to believe in something, people should still strive to be guided by knowledge and wisdom.

The monk added that relying on superstition for success is no substitute for hard work and a proper career.

At times like this, superstition takes centre stage while the teachings of Lord Buddha fade into the background, the monk noted. 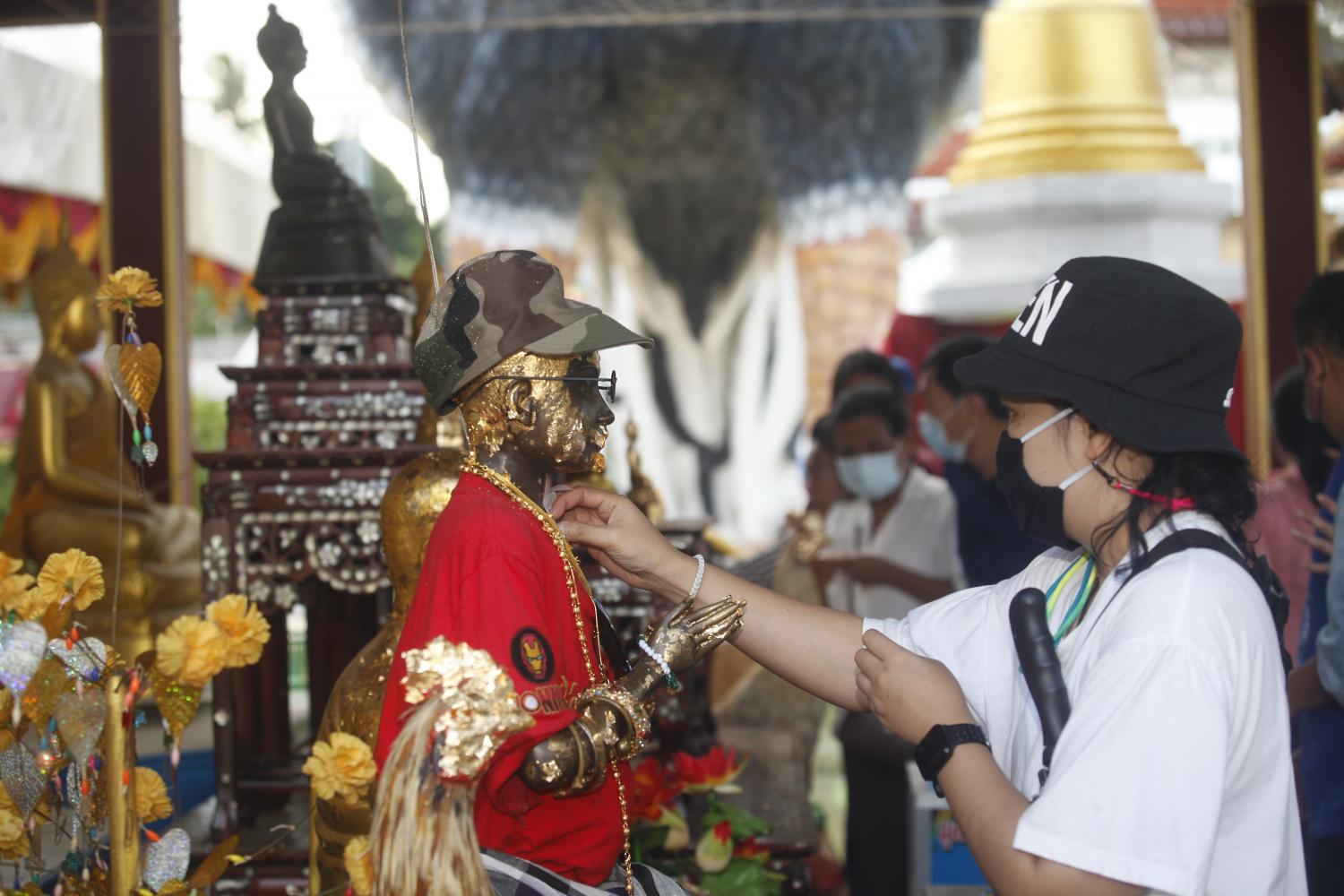 gold for good luck: A devotee puts a gold leaf on the statue of Ai Khai, enshrined at Wat Chedi in tambon Chalong of Sichon district, Nakhon Si Thammarat. The statue of Ai Khai is a magnet to visitors who hope it will bless them with wealth and good luck.

Amazed by the statue's ability to stimulate the local economy, former finance minister Korn Chatikavanij, who is now the leader of the Kla Party, hailed it as ''constructive power'' or ''soft power''.

With an economic slump besetting the country, other provinces should make the most of their local strengths and resources and market their best local content to pull in visitors from elsewhere, he said.

In addition, the government can also step in and help by developing infrastructure and transport systems to make travel easier, according to Mr Korn.

''Passing interest in such [superstitious] beliefs cannot deliver sustainable results ... therefore, it is necessary to develop and promote other tourist attractions which will encourage return visits as well as long-term prosperity,'' Mr Korn said.