Sex workers surviving on handouts as Coronavirus drives away trade

Pawan Leewajanakun, 33, a male prostitute and sex-worker rights activist, boosted his income by taking in private customers via an online platform, rather than relying solely on the bar in Patpong.

The vivid lights of Patpong Road are slowly ebbing away as many bars and clubs cannot keep their heads above water. Many bars are taking their last gasps of air amid an economic slump caused by the onset of the Covid-19 pandemic last year.

On Feb 22, the Centre for Covid-19 Situation Administration (CCSA) allowed the reopening of entertainment venues as well as pubs and bars in almost all provinces except Samut Sakhon, where alcohol drinks can be sold until 11pm.

Entertainment venues on Silom Soi 2 and Silom Soi 4 have gained some customers, but Patpong Road, once a centre of Bangkok's night life, is still quiet.

"We have to be frugal on everything, and have had to lay off some staff and our girls," a 64-year-old manager of a female host bar (for male customers) on Patpong Road said, adding there are only 9-10 bars in total left.

"The first wave was much better as people [still] had their own savings, but when the second wave arrived, not many were able to survive. The place next door has just closed because of the second wave," he said.

Having worked here for 36 years, he said Patpong actually has been quiet for almost 10 years due to the bar control policy imposed 20 years ago that limited opening times to no later than 1am. It also made many foreigners unhappy.

"We need to understand that they came here on travel tours, in which they stayed no longer than a month and they were willing to spend a lot. I think we should let them enjoy themselves as much as possible. Some, especially the Japanese, spend at least 10,000 [baht] a night," he said.

During the pandemic, his bar lost 80% of its regular income and the money which was left went on fixed costs and salaries for permanent staff. The owner held off cutting staff pay for three months during the first wave, but as the bar closure went on, he shifted to topping up shrunken wages with food support.

"I think it would take around 2-3 years for Patpong to resurrect again," he added.

The manager of a male host bar, 49, revealed his bar had made a seven million baht loss since last year, even though the landlord gave him a 50% discount on the rent.

To survive, his bar had to cut drinks prices to attract local customers, as the border closed and foreigners, the main source of customers, could not come.

"I can remember the day after controls on nightspots were relaxed, I had only two customers in this bar and I had to pay my boys 4,000 baht for working that day," he said.

His bar is the only operator in the area whose the owner did not lay off staff. Their salaries have been cut by half, though.

Many changed their jobs to do something else, but life was not that easy. "Last year, three of our boys committed suicide because they cannot figure out how to support their family, as the bar was closed for a long time," he revealed.

"I am still asking myself why I come into bar as I am paid so little," she said, adding she pays rent of 4,500 baht.

She was the only breadwinner in her family, which consists of her 80-year-old parents who are ill, one younger brother and one grandchild. She said she was sending them support of 12,000 baht monthly but had to stop.

"Working in this job costs a lot. Not only in rent but I also have to pay 500-600 baht for my makeup, cosmetics and 100 baht a day for transport," she added.

The bar used to have four hostesses who would compete to attract customers. Nowadays, she is the only hostess left. Still, she rarely has customers, she said.

Last year, she entered self-quarantine after coming back from Singapore in January and Dubai in March. She said she earned around 140,000 baht from those trips, but spent the money supporting herself in Bangkok during the bar closure period and sent the rest to her family.

Without higher school leaving qualifications, her job options are limited. She turned to sex services to help make the ends meet.

"I have done everything I can, even manual work. Do not say I am not trying or that we choose to be prostitutes. It is the choice that our lives force on us," she said.

She said she received 15,000 baht in state financial support, not enough to feed her family. Even with food support from NGOs, it was enough for just a few days.

"This place [Patpong] is taking its last breaths. It is now just a parking lot," she said, adding it has been quiet since 2014 coup and it was worsened by the pandemic.

Pawan Leewajanakun, 33, a male prostitute and sex-worker rights activist, said he has boosted his income by taking in private customers via an online platform, rather than relying solely on the bar in Patpong where he worked as a go-go boy and masseur. 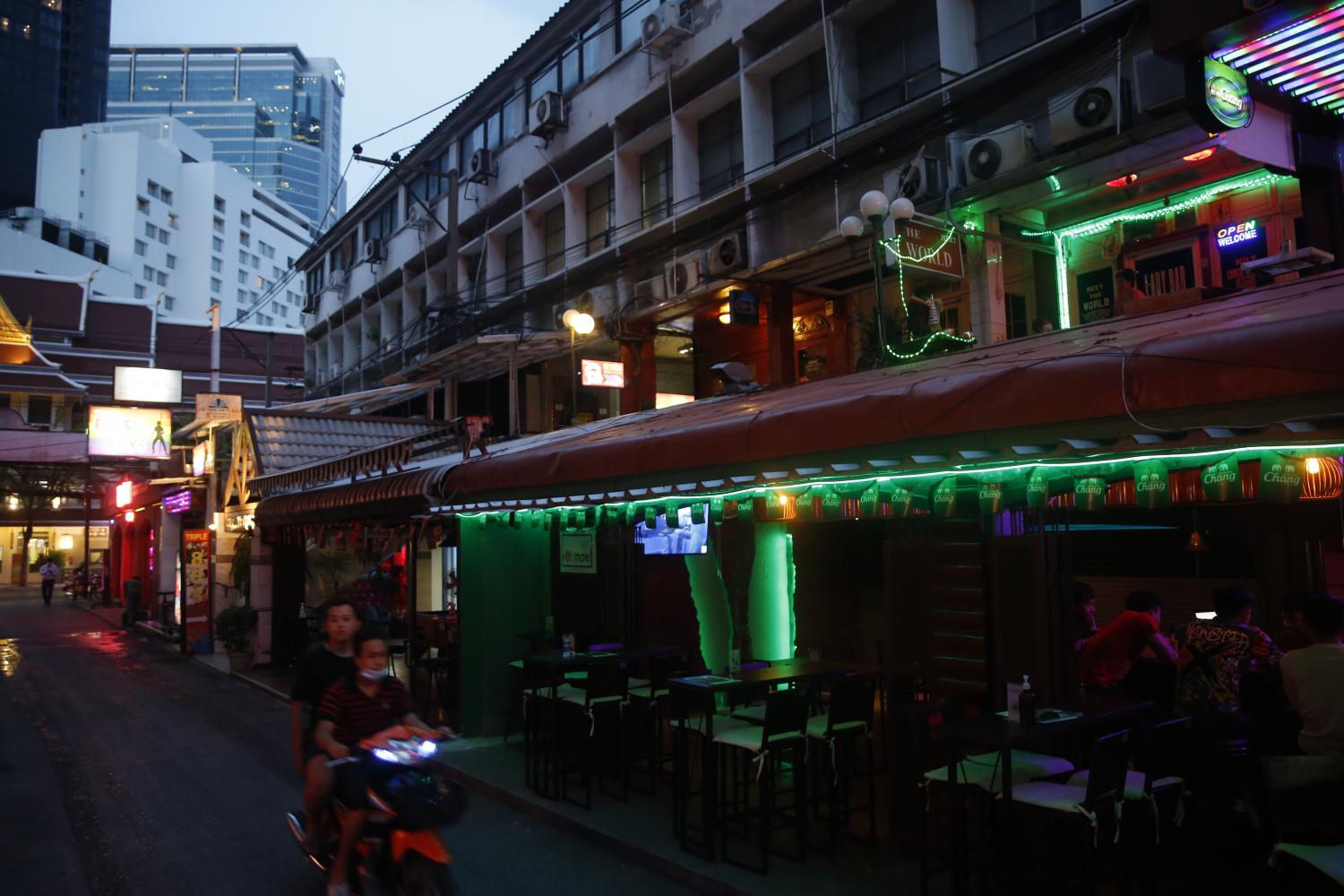 needs shot in arm: Unlike entertainment venues on Silom Road, those on Patpong Road, once a centre of Bangkok's night life, is still quiet as they have lost their main customers who are foreign tourists.

During the 2020 Chinese New Year festival, business was still good as many Chinese tourists came to the bar and massage parlours where he worked.

He made about 34,300 baht in a week, not including the prostitute's job in which he took customers from outside which brought in another 2,000-4,000 baht a night.

"When the first wave came, I had to reduce my fee to 2,500-3,000 baht a night, as many were local customers and I had to stay overnight with them as I could not go back home before curfew," he added.

Nittaya Phanuphak, executive director of the Institute of HIV Research and Innovation (IHRI), who collaborates with Service Workers in Group Foundation (Swing), said she had learned that sex services were still active during the period when venues were closed. Some of the service providers remained in the Patpong area and Pattaya as they could not move elsewhere.

The doctor said she and colleagues had realised for some time that sex services are changing from venue-based to non-venue-based. As she works to ensure sex workers' access to health services, her team has also used online channels over the past five years.

"Some people said Covid-19 has made people better make use of technology and people have more channels to access health services. But on the other hand, we can see the inequity especially in the groups that are vulnerable and have less opportunity to use technology.

"They are more likely to be left out of the system, just as they are the education system," she said.

The assistance provided includes various supplies and platforms as well as information on how to get health services, plus new skill training or non-formal education.

"The goal of the foundations working with sex workers is to help them access public health services as they are doing this job. But the ultimate goal is to help them move on from being service workers as soon as possible. Covid-19 can be part of that drive to push them out," she said.

Mai Janta, of Empower Foundation, who represents sex workers mainly in Chiang Mai, said that after Covid-19 struck, about half of the sex workers returned home. Others stayed and found odd jobs or extra training.

As far as she knows, the income of the remaining workers is about 30% of what they used to earn as foreigners, their main customers, are not here.

While only some have turned to online channels, most stay with their employers as they have regular customers.

"Nowadays a lot of people are unemployed. When [entertainment venues] can open we are happy to return to work. But it's not the same as before," she said.

Her foundation acts as adviser to sex workers and shares information of what they need with the government.

It also helps with capacity building so that sex workers can do other jobs for a living.