Holding those behind the haze to account
Thailand
Special Report

Increased data on the sources of PM2.5 pollution point to possible solutions

Chiang Mai spent several days this month as the most polluted city on the planet, with PM2.5 levels reaching 226 microgrammes per cubic meter (μg/m³) there. The predictability of the annual surge in pollution and the lack of effective preventative action have angered city residents and concerned civil society groups. 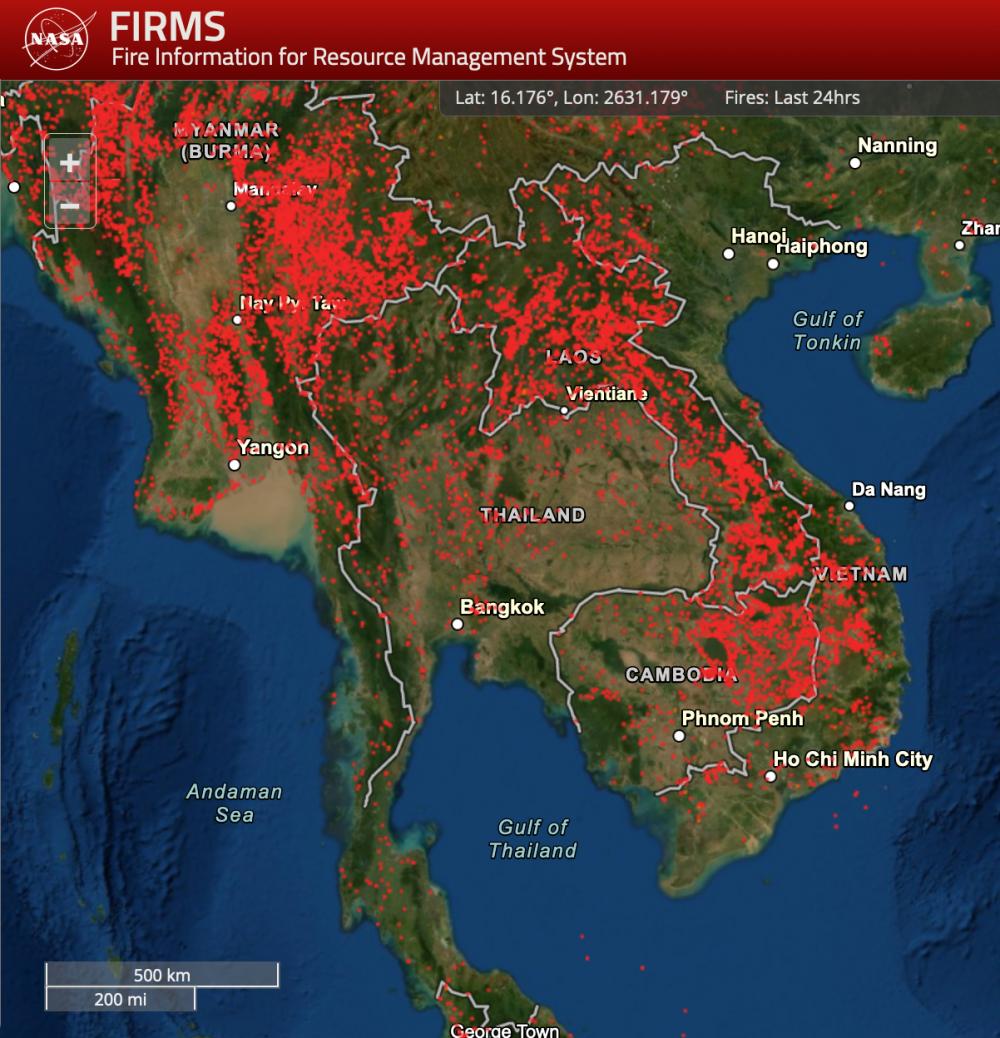 heating up: A satellite imagery shows hotspots in and around northern Thailand on March 19.

Pollution levels peak in northern Thailand during the burning season -- normally in March and April -- when crop waste burning and forest fires fill the air with particles, creating a haze so dense that Doi Suthep mountain, on the western edge of the city, is obscured.

The issue is complex, involving large-scale contract farming, deforestation and encroachment, and a multitude of socioeconomic factors. But as the severity and awareness of the problem have increased, there is now more data available to pinpoint the causes and sources of the smoke, which could provide a means to finding a solution.

A report released in February by Greenpeace attributed 14,000 deaths in Thailand in 2020 to air pollution, a statistic that did not surprise Dr Rungsrit Kanjanavanit. As a cardiologist at Chiang Mai University, he has been raising awareness about the severity of the pollution issue for a decade.

"PM2.5 is more related to adverse health effects because it's so small that it can enter the bloodstream, similar to smoking," Dr Rungsrit said, adding that every 22μg/m³ of PM2.5 is equivalent to everyone -- including newborns, the elderly -- smoking one cigarette.

He quoted a 2013 study that found for every 10μg/m³ (annual average) increase in PM2.5, there was a 6% increase in total mortality in overall population and 1.03 years of shortened life-span.

The Pollution Control Department, under the Environment Ministry, says the main cause of the northern haze is the large amount of burning on farmland and pointed out that the contract farming of maize is a huge concern in the north, with the United States Food and Drug Administration anticipating more than 5 million tonnes of Thai corn being produced in 2020/21.

The harvesting of Hed Thob mushrooms is also another factor, as hunters torch the forest floor to make picking easier. While there is a local market for the mushrooms, the export market is large -- an estimated 2,120 tonnes in 2019 -- especially to China.

"Thailand produces 5.5 million tonnes of corn kernel annually, between 40% and 50% of it in the North, or 2.2 to 2.75 million tonnes per year," said Dr Michael Shafer of local organisation Warm Heart Foundation.

Explaining how much biomass is burned, Dr Shafer said, "a study published by Mahidol University in 2018 found that 41% of stalk had been burned. The remaining stalk just rots in the field, and an increasing portion of the husk is sold for animal feed or bedding."

The Charoen Pokphand Group (CP) is Thailand's largest agri-business corporation and it has invested in maize for its animal feed-stock industry.

In response to questions from the Bangkok Post on the company's corn farming and how the company controls pollution and improves the environment, CP's Communication and Public Trust department provided a document titled "Maize Factsheet 2021". The document said CP "since the severe haze crisis in 2015, joins society in all sectors to solve the problems that arise, and also realises the importance of social and environmental responsibility."

The documents set out CP's aim for traceability in the sourcing of materials throughout the supply chain.

It also highlighted their policy of "not to encourage planting in mountainous areas or conserved forest areas".

Since Jan 1, 2016 CP has stopped purchasing maize products from farmers who plant crops in the area without land ownership documents or without being certified by state agencies and in areas under environment rehabilitation.

The document lists more than 20 CP initiatives since 2015. However, no information was provided on the duration or results of any of the projects.

Due to the predictability of the annual northern haze, many assume that local governments are doing too little about the issue. Chiang Mai's Vice-Governor Rattapol Naradisorn disputes this.

"Short-term, we're working on putting out the fires. Long-term, we're looking at changing the biomass waste into something that has economic value, for example briquets to use as fuel."

The authorities' annual burning ban -- two months when open burning is prohibited -- has been criticised as this year, the March 1 start of the Chiang Mai ban coincided with a significant increase in PM2.5 levels.

According to research by Dr Somporn Chantara, head of the Environmental Science Research Centre (ESRC) at Chiang Mai University (CMU), the annual PM2.5 surge is lower, but is now spread over three months rather than two.

"Last year the government banned all burning," Mr Rattapol said. "But when you ban everyone from burning, it becomes unmanageable. So now the burning areas are limited and the goal for this year is to reduce at least 25% of the burning." 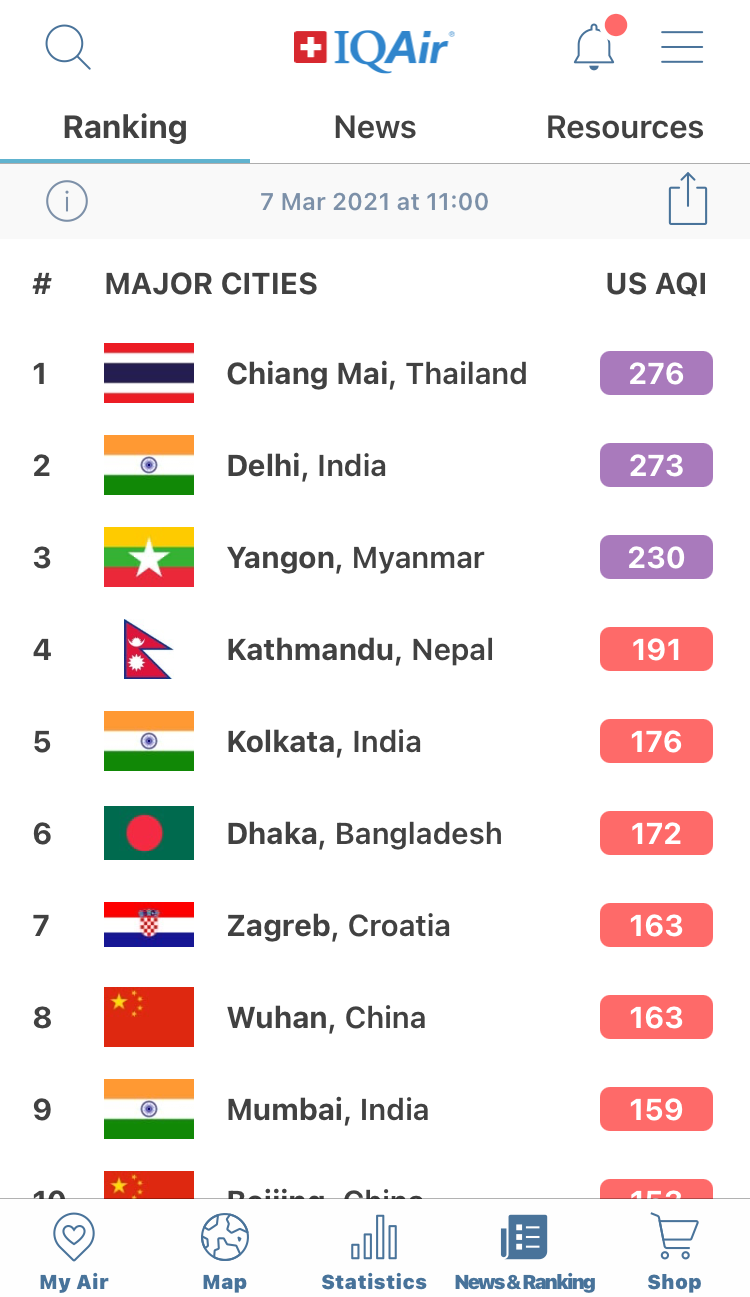 A screenshot from IQAir on March 7, 2021 showing Chiang Mai as the post polluted city on Earth

Dr Somporn and her CMU team analyse both the cause and source of the smoke. Data can vary daily due to meteorological factors, and yearly due to varying crop yields and market demand, but a paper produced by the ESRC found that transboundary haze greatly influences Thailand's pollution levels.

"During 2010 to 2015 we can say that 80% of the pollution in Chiang Mai was from Myanmar, particularly in March and April," Dr Somporn said.

Although this study has not been updated, the ESRC uses daily reports of the number of hotspots provided by the Thai Geo-Informatics and Space Technology Development Agency. 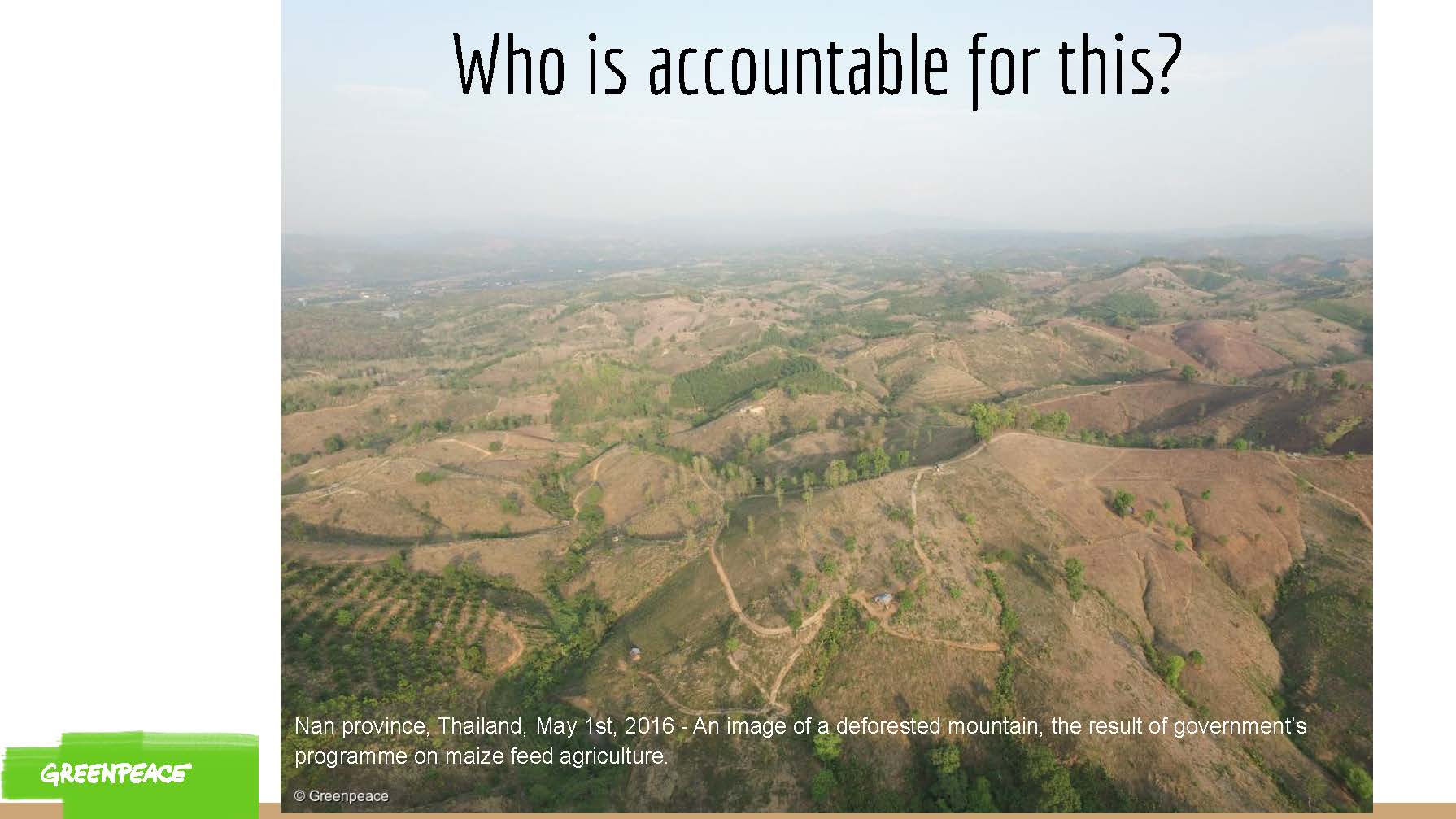 Image from Greenpeace presentation at Foreign Correspondents' Club of Thailand on Sept 21, 2020.

"Even though the hotspots occur in the maize production area mostly in Shan State, the concentration of PM2.5 in Shan State is less than northern Thailand and northern Laos."

While Asean trade agreements have enabled the Thai corn industry to expand across borders, the union has so far failed to tackle the pollution. There is, however, one legislative model that could be implemented in this region, Mr Tara said.

"Singapore came up with the Transboundary Haze Pollution Act in relation to the companies based in Singapore that are causing forest fires and haze pollution across the border," he said. "They can identify who owns this piece of concession and identify hotspots of burning in those concession areas.

"We want to replicate this in the Greater Mekong subregion, so we can identify a hotspot in Shan State [and see] who owns that land or look at the supply chain -- who actually supplies the maize production to that area -- and come up with a mechanism for them to be more accountable."

For those involved, the solution comes down to one factor -- political will. "The government needs to protect the basic right of clean air, that's for sure," said Dr Rungsrit.