From Chiang Mai air pollution to global climate change, animal agriculture is the elephant in the room -- and biochar one way to tame it.

As Earth Day dawns, Chiang Mai is breathing more easily. It's been one of the worst-ever smoke seasons in the Rose of the North, with the city winning the accolade of "most polluted city on the planet" on multiple days, but the dust has settled for now.

Meanwhile, US President Joe Biden is hosting a virtual Leaders Summit on Climate. The goal of capping the average global temperature increase to 1.5 degrees looks virtually unobtainable. As usual, most of the debate among global leaders has focused on fossil fuels, with Mr Biden seeking cuts in China's coal consumption.

The connection between Chiang Mai's smoke season and the global climate crisis might not be immediately apparent. But the elephant in the room, in both cases, is animal agriculture. Scientists say that if we stopped burning coal and driving petrol-fuelled cars tomorrow, we would still miss the climate change targets if the world's food production continues on its current course.

Between 25% and 30% of global greenhouse gas emissions come from global food systems, says Dr Hannah Ritchie of the Oxford University-affiliated project Our World in Data. Half of the world's habitable land is used for agriculture, and 77% of that is for raising livestock. Half of the world's harvest is fed to animals. But despite using more than three quarters of agricultural land, livestock provide only 18% of global calories.

The statistics are hard to swallow: aside from the dismal feed-to-food ratio, studies say that on average it uses 11 times more fossil fuels, 13 times more water and 15 times more land to get protein from animals than directly from the crops we feed them. "We're gonna have 10 billion people to feed by 2050," said Bruce Friedrich, founder and executive director of The Good Food Institute on The Plant Proof Podcast. "The inefficiencies of cycling crops through animals make no sense at all."

As global incomes rise, demand for meat is soaring. "People are getting richer," said Michael Shafer, an American university professor who now runs the Warm Heart Foundation in Chiang Mai's Phrao district. "People want to eat meat. People want to drink milk. People want to eat ice cream. There is a huge demand for low-cost feed for animals people want to eat. What we've seen over the past couple of decades is a massive expansion of global production of staple crops, most importantly corn."

In Chiang Mai, and nearby areas of Myanmar and Laos, huge tracts of forestland have been cleared to grow maize for livestock, particularly chicken and pigs. Since Thailand -- and the rest of the world -- is not about to suddenly stop eating meat, Mr Shafer's solution to the Chiang Mai smoke problem is to give farmers a viable alternative to burning the waste from the crops they grow for animal feed -- especially maize, the cereal known as corn in the US. 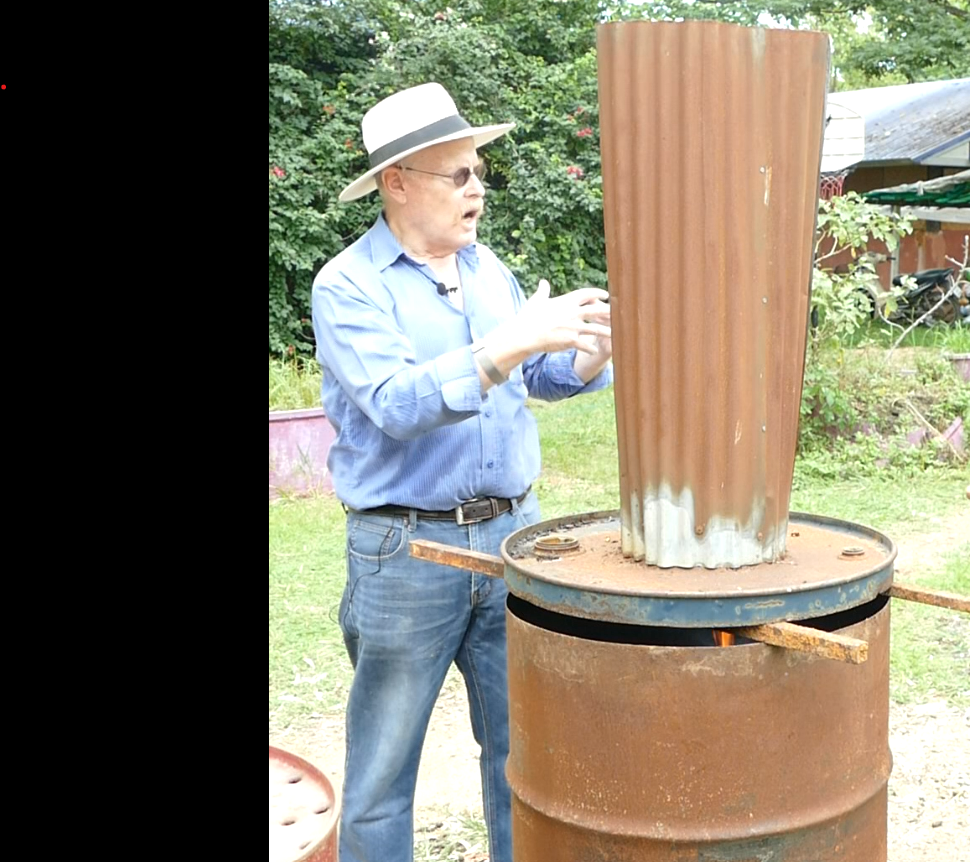 Michael Shafer demonstrates a biochar incinerator made out of an old oil drum in Phrao district of Chiang Mai.  (Photos by Dave Kendall)

"Corn is an inherently dirty crop," said the feisty, loquacious founder of a charity that tackles both environmental and poverty issues. "Three quarters of the plant itself ends up as waste. Only 22% is actually corn kernel that people can eat. You get stalk, you get cob, you get husk…you have to get rid of it, to clear it for next year's crop. If your field is on a mountain slope, you're not gonna pick it up by hand, you can't run a tractor over it, so out comes [lighter] Mr Bic and vroom -- your field is clear again."

Mr Shafer's solution? Turn the waste into biochar, an environmentally friendly version of charcoal. It can be used as fertiliser and a soil decontaminant added to animal feed, and made into smokeless briquettes for cooking. It's a low-tech solution that uses old oil drums and cattle troughs as smoke-free incinerators, and can provide a "second crop" to farmers. "If you make biochar with that plant waste, you can capture the carbon. If you put that into the soil it will stay there forever. The oldest biochar deposits we know of are at least 4,000 years old. And that's carbon that's been removed from the atmosphere."

Ultimately, scientists say, the most effective way to remove carbon from the atmosphere is "rewilding" -- letting nature do the work. Dr Ritchie says that based on peer-reviewed studies and data from the UN Food and Agriculture Organization, three-quarters of the land the world uses for agriculture -- three billion hectares, an area roughly the size of North America plus Brazil -- could be returned to forests and natural grasslands if the world adopted an exclusively plant-based diet.

Such a radical shift would stop climate change in its tracks. Since the world is not about to turn 100% vegan, however, the most practical strategy could well lie in a combination of approaches: a shift toward plant-based food, and then being smarter with the smaller amount of land used for growing crops. With lower demand for animal feed, Chiang Mai could be partially reforested, and the crop waste from the more fertile fields that remain could become a carbon sink instead of a carbon firehose.

"If we could take the millions of tonnes of corn waste in northern Thailand and turn it into biochar, said Mr Shafer, "we would be removing literally hundreds and hundreds of thousands of tonnes of CO2 from the atmosphere."