Soldiers stand guard blocking potential anti-coup protesters at Democracy Monument after the coup on May 22, 2014. (Photo by Patipat Janthong)

Questions remain whether Thailand has made any progress or stepped backwards in the past seven years since the National Council for Peace and Order (NCPO) staged a coup in 2014.

Saturday marked seven years since the coup. The Bangkok Post asked academics, politicians and government representatives to share their views on the matter. Academics and opposition politicians say many problems remain unsolved but those from the government insist the Prayut Chan-o-cha administration has made progress in reforms.

They felt that those who have moved forward are the coup-makers themselves who have tightened their firm hold on power, while conservative groups which previously supported the regime are increasingly disillusioned and demanding Gen Prayut step down.

"Gen Prayut does not need the backing of these people any more because he has already attained power,'' Mr Wanwichit said.

"Gen Prayut is confident in his ability to save his associates who have tarnished reputations, and disappointed people who expected him to promote transparency in politics,'' he said.

Government efforts to foster national unity have also failed, he said, adding that young people have held street demonstrations which mounted a challenge to the government's authority.

Mr Wanwichit said Gen Prayut may be pinning his hope on the National Security Council to design a strategy to steer the country through the Covid-19 pandemic.

As Covid-19 vaccines start to arrive in large quantities over the next two months, the people may feel warmer towards the regime while those with close ties to Gen Prayut are preparing for the Bangkok governor election expected later this year, Mr Wanwichit said.

Deputy Minister of Agriculture and Cooperatives Thamanat Prompow has also established a political support base to prepare for the next general election, which will help Gen Prayut to stay in power, Mr Wanwichit said. 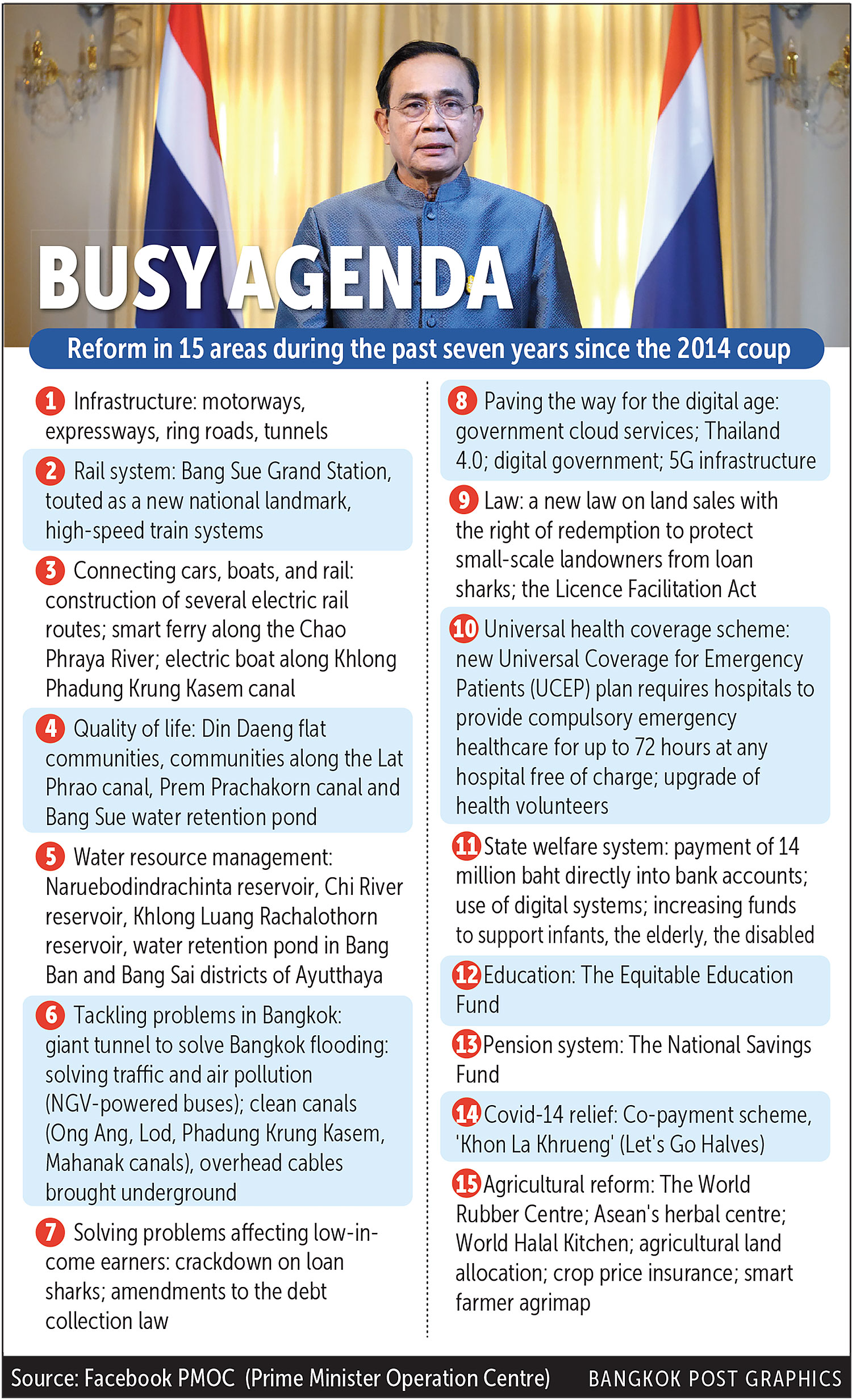 No real results of reform

Yutthaporn Isarachai, a political scientist from Sukhothai Thammathirat Open University, said that reform plans initiated by the government have failed to deliver any tangible results while democracy is restricted under the constitution with the 250 senators dominating politics.

During the past seven years, the country has been bogged down in political conflict while social injustice besets the country, he said.

"The street demonstrations that took place late last year and early this year represented the first public movement in seven years since the coup. This reflects a change in Thailand's political landscape,'' Mr Yutthaporn said.

He said the change was also the result of the constitution which contains controversial provisions regarding the new voting system which paved the way for new parties to be set up.

"Under the NCPO's five-year rule, we got the constitution, national reform plans and the 20-year national strategy, and the senate.

"But we got only the quantity, we did not see any quality,'' he said.

The reform process also lacks public participation as people do not feel they are part of the process, Mr Yutthaporn said, adding the government did not mention a national strategy to deal with Covid-19 and a public health reform plan.

The government cannot use the Covid-19 crisis as an excuse to delay the reform process. In fact, the crisis has exposed failures in reform as seen in illegal gambling, human trafficking, illegal migrants and entertainment venues blamed for wave after wave of the pandemic, he said.

In particular, police reform appears to have gone nowhere despite the issue having been raised for a long time with several committees set up to address the matter, Mr Yutthaporn said.

Failing on all fronts

Chief opposition whip and Pheu Thai deputy leader Sutin Klungsang said that since then army chief Prayut staged his coup ousting the Pheu Thai Party-led government, the coup-makers have not achieved the goal of ending the political conflict.

Social divisions that were swept under the rug for a while have now resurfaced with people becoming more polarised. The highest institution has also been dragged into the conflict, Mr Sutin said.

When it comes to reform plans, there are only reform laws and reform committees, but no substantive results have been achieved, he said, adding the constitution itself is riddled with problems as it was designed to help the coupmakers prolong their hold on power.

As for the economy, there are no fundamental changes to the economic structure with injustices remaining unsolved, while the justice system has not been reformed in a way that will gain acceptance, Mr Sutin said.

After seven years, a bill on education reform was recently tabled in parliament. It was met with opposition from many in the industry, while the civil service system has not undergone any reform, Mr Sutin said.

"In terms of reform, it has failed on all fronts. No conflict has been solved, breeding new problems in the process,'' he said.

On the other hand...

Mr Anucha also maintained reforms initiated by the government have made substantial progress with laws being amended to accommodate changes. When the bills are enacted, the reforms will be more visible.

Responding to criticism about national unity, he said the government has pushed for constitutional amendments as proposed by several groups.

However, charter amendments have to go through parliamentary procedures and it is impossible to change things immediately, he said.

"The prime minister has tried to bring the conflict into the formal problem-solving process. A reconciliation committee was set up to look into the matter. A referendum law was passed to prepare for charter amendments," Mr Anucha said.

The government has set up 12 committees to oversee reform in various areas as stipulated by the constitution.

Several reform efforts, particularly economic reforms, have delivered tangible results, such as amending the laws to promote high-value agriculture and help small-and-medium-sized entrepreneurs, he said. Several bills have been prepared to push for political reform and tackle graft, though it is up to parliament to prioritise matters, he said.