Narisarawan Kaewnopparat prepares to complain to the Crime Suppression Division in the November 2016 file photo, over the death of her uncle, Army Private Wichian Pueksom.

Getting a draft law fighting torture and enforced disappearances to parliament was an uphill battle but fleshing it out may be a lot harder to do, according to experts.

Thailand has been a signatory of the Convention against Torture and Other Cruel, Inhuman and Degrading Treatment or Punishment (CAT) since 2007. The country must issue a law to carry out the legal mandate and functions of the convention.

However, doing so is easier said than done. The lack of political will was among early hindrances holding back the legislation.

After 14 frustrating years of pushing for the law, a breakthrough finally came last month when parliament adopted a bill on protection and suppression of torture and enforced disappearances at its first reading.

Further progress was marked on Oct 5 when the House committee on law, justice and human rights met to appoint a chair of a panel to delegate further work on the bill to members.

Too many drafts spoil broth

Assigning responsibilities was the easy part. Drafting a law which will draw on features of four different bills tackling the topic, proposed by various agencies and parties, will prove to be a tough task.

Crucial details differ, ranging from the statute of limitations on enforced disappearance cases, punishments against offenders, the scope of investigators' powers, to the definition of a "victim".

Distilling ideas looks certain to be time-consuming. In other words, making the bill acceptable to all sides is no piece of cake.

For Angkhana Neelapaijit, the bill is painfully close to her heart. Speaking both as a rights defender and a woman whose lawyer husband, Somchai, has been declared missing since 2004, Ms Angkhana said the law to stamp out enforced disappearances and torture was long overdue.

Herself a member of the bill drafting panel, she insisted the law was designed to prevent state authorities from committing brutality against people and getting away with it.

"If they go scot-free, the tortures and enforced disappearances will never end," she said. 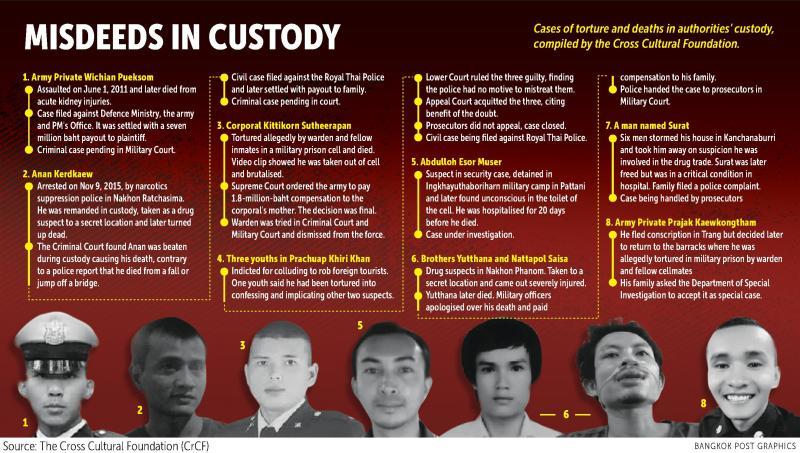 Somchai was abducted on May 12, 2004, from his car on Ramkhamhaeng Road in Bangkok, not far from Hua Mak police station. He has not been seen since and is presumed dead.

He served as chairman of the Muslim Lawyers Group, which helped suspects, mainly those in the far South, accused by security authorities of involvement in the insurgency.

His case was the first forced disappearance case that moved through the courts of justice until it reached the Supreme Court, which acquitted all suspects.

In 2015 the court acquitted all five police charged in the case with robbery and coercion, citing lack of evidence. The officers were seen by witnesses dragging Somchai from his car on the day he disappeared.

The court also said his family could not act as a co-plaintiff, because there was no actual evidence that he was dead or even seriously injured.

The Department of Special Investigation (DSI) later reopened the case, only to declare it closed in 2016.

Another outstanding case concerns the disappearance and death of Karen activist Porlajee "Billy" Rakchongcharoen in 2014.

He was last seen in the custody of Chaiwat Limlikit-aksorn, then chief of the Kaeng Krachan National Park, on April 17, 2014, at a time when he was pursuing the Karen rights issue in court.

In 2011 Chaiwat led an eviction of the Karen from their upper Bang Kloi village to a namesake relocation site.

Park officials torched the village. The fight for those rights arguably cost Billy his life.

It was the DSI that charged Mr Chaiwat with murder, using DNA and forensic evidence, but the Office of the Attorney-General decided against lodging indictments, citing "insufficient evidence" as a reason.

Ms Angkhana said it torments her to see that in both her husband's and Porlajee's cases, despite solid evidence proving they were victims, they were unjustly portrayed as the "bad eggs" who deserved to be made to disappear.

"It is not right for society to feel this way," said Ms Angkhana, a former national human rights commissioner.

She said core principles of the bill must be kept intact, including that the statute of limitation in crimes of torture and enforced disappearances must be infinite.

Also, damaged parties must be redefined. In Porlajee's case, his common-law wife, Meenor, was denied the right to file a police complaint on her husband's disappearance on the grounds they were not legally married. The new law must straighten out such discrepancies. She added that no single agency should have absolute authority to investigate a case.

Seats on the law drafting panel should be offered to legal experts, representatives of the courts, prosecutors and families of the victims of torture and enforced disappearances, she said.

Nareeluck Paechaiyaphum, director of the international human rights division at the Department of Rights and Liberties Protection, said it will take some time before the draft law is finalised and put to a vote in the House and the Senate.

One of the four bills was initiated by the Justice Ministry, under which the department comes. The ministry is adamant about retaining in its draft Sections 11 and 12.

Section 11 outlaws acts of torture and enforced disappearances regardless of national emergencies, war or security situations.

Section 12, on the other hand, bars a state agency from extraditing any individual at risk of being tortured or a victim of enforced disappearance in a foreign country.

She said it would be interesting to see whether the two sections will be amended or dropped during the scrutiny stage.

The fate of the bill is also tied to the government's tenure, the director said.

If the government's term is cut short or the House is dissolved beforehand, the draft will be suspended and go back to square one when it re-enters parliament after the next poll.

"Let us pray that work on the draft will be finished during the current administration," Ms Nareeluck said.

Of the torture complaints, 188 were dropped because they did not fit the criteria set by the CAT. One disappearance complaint also did not see the light of day for the same reason.

Ms Nareeluck said torture and disappearance complaints are still being lodged although their numbers have risen and fallen over specific periods.

Meanwhile, Amnesty International and the International Commission of Jurists (ICJ) have expressed concerns over the slow drafting of the law which they said was a crucial conduit for bringing perpetrators to justice and ensuring that justice is served.

While urging parliament to enact the bill without delay, the organisations pointed to certain legislative content possibly earmarked for incorporation into the bill which would contradict the CAT.

They said that despite extensive debates and opinions expressed about the bill, some potential matters have not been revised.

These include what criminally constitutes torture and enforced disappearances; the lack of stipulation of actions deemed as cruel, inhuman and degrading treatment or punishment.

Also of concern is the absence of a clear indication of what state agencies are in charge of seeking prosecution against perpetrators; and the lack of a mention of penalties against parties neglecting to collect evidence for prosecuting the perpetrators.