Race to the finish line

The Bangkok governor election is set for May 22.

The May 22 Bangkok governor election promises to be a star-studded contest that serves as a barometer of the main parties' popularity and will be highly indicative of how the next general elections will play out, according to experts.

With governor candidacy registration around the corner, seven high-profile individuals have thrown their names in the hat, leaving city voters spoiled for choice. 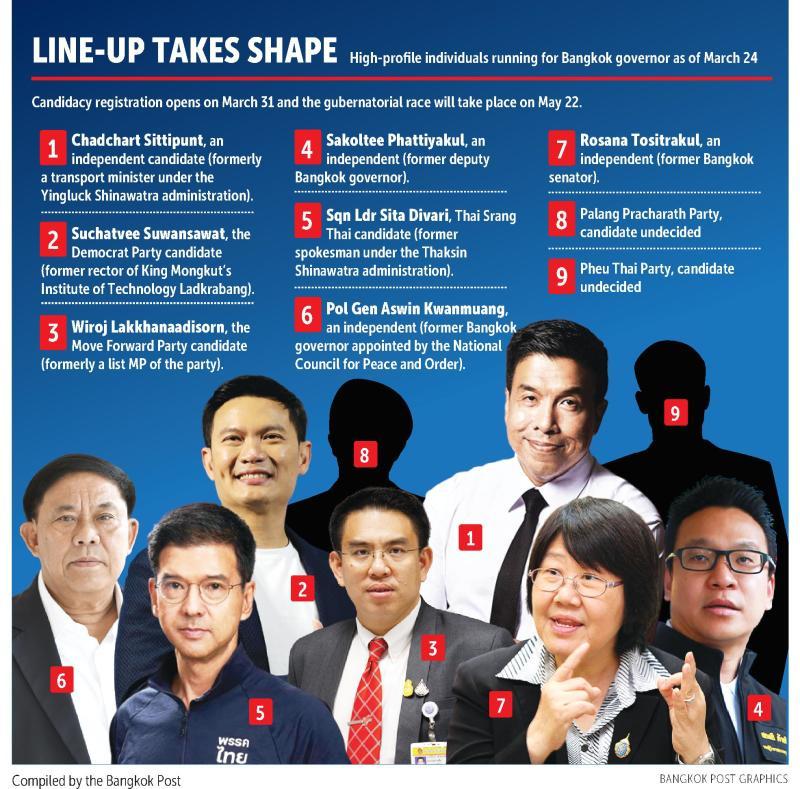 The former has kept a tight lid on whether it will field any candidate while Pheu Thai vowed not to stand in the governor poll unless it can find someone as suitable a candidate as Mr Chadchart, a former transport minister under the previous Yingluck Shinawatra administration.

Time is running out as candidacy registration takes place from March 31-April 4.

A taste of what's to come

Political scientists agreed the individuals who have announced their bid for the governorship have captured the interest of voters. However, the governor poll also looks certain to point towards the likely fate of parties competing in the next general elections, in the event they are fielding or backing candidates in the May 22 competition.

It will also spell far-reaching implications for political elements or parties backing the independent candidates.

Wanwichit Boonprong, a political science lecturer at Rangsit University, said the Bangkok governor poll is much anticipated after almost 10 years in which they were not held. The last poll was in 2013, a year before the coup, engineered by the National Council for Peace and Order (NCPO), ousted the Pheu Thai-led government with now-fugitive former premier Yingluck Shinawatra at the helm.

The NCPO later installed Pol Gen Aswin as governor. He stepped down last week to prepare himself to compete in the governor poll.

Mr Wanwichit said city residents want changes and the fact that many candidates have floated numerous campaign policies that centre on combating urban problems can be a gauge of voters' desire to see pressing issues they experience dealt with rather than embracing new development projects.

He expects a heavy voter turnout. "The stakes are high both in terms of individual candidates and parties behind them," he said.

The contest could give some candidates the exposure they need to land a role in a major party even if they are defeated in the governor poll.

They would find themselves bumped up high or higher on the party list in the next general elections expected later this year or by March next year when the government's four-year term expires.

The governor poll will also be a litmus test of party popularity ahead of the next general elections, he said.

"Look at Khun Sita for example. His candidacy will test the water for Khunying Sudarat Keyurapan's group [which formed the TST] to see if they still command a large following after breaking away from Pheu Thai," Mr Wanwichit said.

The question is: Can the TST woo new voters away from Pheu Thai?

Also, Mr Wiroj may not have to bet on winning the poll. He might be more interested in checking whether the MFP's base among young and new voters remains intact or if he can undercut Mr Chadchart.

At the same time, Mr Sakoltee, who quit as deputy Bangkok governor recently, may be driven by a personal quest to chart his own future after five years under Pol Gen Aswin's wing at City Hall and drop his image as a core member of the People's Democratic Reform Committee movement which rallied against the Yingluck administration.

The May 22 poll will be fiercely fought and more colourful than the 2013 contest that pitted Pheu Thai's Pongsapat Pongcharoen against the Democrat's MR Sukhumbhand Paribatra.

Mr Wanwichit said the candidates for the governor election can be put in pairs: Mr Suchatvee and Mr Chadchart, Pol Gen Aswin and Mr Sakoltee, Mr Sita and Mr Wiroj. Contestants in each pair have comparable experience in their professional fields or political acumen.

But the race may boil down to Mr Suchatvee and Mr Chadchart.

He added leaking fake news on social media to discredit candidates was not working as there are teams to counter it.

Yutthaporn Issarachai, a political scientist at Sukhothai Thammathirat Open University, said not every candidate was intent on winning as they are using the contest as a stepping stone for bigger roles in national politics.

He agreed candidates on the same side of the political divide will undercut each other -- Mr Suchatvee with Mr Sakoltee, Pol Gen Aswin and even Ms Rosana. On the other side, he said, support will be split between Mr Chadchart, Sqn Ldr Sita and Mr Wiroj.

Chances are the margin of victory for the winner will not be so far ahead of the first runner-up.

"Even though Mr Chadchart is a clear favourite in several surveys, his lead might close in the last lap of the poll," Mr Yutthaporn said.

National politics could decide the governor's outcome as figures show most winners of the governor election tend to be from the government's opposing side, the lecturer added.

In his view, many voters go for the political appeal of individual candidates, followed by their poll vision or campaign manifesto and their affiliation to a political party.

Chadchart to the finish line

Stithorn Thananithichot, director of the Office of Innovation for Democracy at King Prajadhipok's Institute, said that before the 2013 governor poll voters prioritised individual candidates over their connections with parties.

This was consistent with the now-defunct Thai Rak Thai Party having managed almost a clean sweep in Bangkok during general elections. However, in a governor poll, it lost.

But in the 2013 governor poll, voter sentiment shifted with the Democrats employing a campaign strategy against Pheu Thai that saw many voters rallying behind MR Sukhumbhand and eventually securing his victory.

Mr Stithorn predicted there would be no repeat of the previous governor poll where the two highest-scoring candidates walked away with a million votes each.

This time, he said, Mr Chadchart is likely to reap a large share of votes while the other large portion of votes will be distributed among the MFP and Democrat Party as well as Pol Gen Aswin, Mr Sakoltee and Ms Rosana.

He added some candidates might receive votes from across the political divide. Voters might feel more relaxed about voting for someone outside of their political preference. It might not be impossible to see Mr Chadchart gaining votes from the pro-government camp.

The academic said Mr Suchatvee's campaign policies are offered in a package which might strike a chord in terms of presentation to babyboomer and generation-X voters. However, younger voters might focus on specific issues and ask where the candidate stands on them.

He explained it is not enough to advertise a candidate's personal profile. His or her ability to deliver campaign promises might be inhibited by the political party the candidate answers to.

What matters more between campaign policies or an individual candidates' profile has to do with who make up the biggest segments of voters who go to the poll. Those aged between 35-55 form the lion's share of voters. If enough of them go to the poll, they might prefer the traditional way of campaigning.

Despite being in the lead, Mr Chadchart's popularity could ebb if the MFP comes up with an election policy that attracts young voters supporting Pheu Thai.

Also, 3-4 candidates share the same pool of voters and votes for them are likely to spread out. However, if one of them can pull a surprise and put up a spectacular policy to draw votes away from other candidates, Mr Chadchart might be in trouble.

"But at this point in time, I don't see what could possibly hand Mr Chadchart a defeat.

"His opponents have no one to unite the votes. There's no magnet among them," he said.

Meanwhile, Phichai Ratnatilaka Na Bhuket, a political science lecturer at the National Institute of Development Administration, said various parties were committed to contesting the poll and are fully prepared.

The support bases for Mr Chadchart and Mr Wiroj overlap although the former commands broader voter segments as he can lure Pheu Thai Party voters.

He can also cash in on young voters who may not be a fan of Pheu Thai but bear no grudges against Mr Chadchart, whose modern persona they can identify with.

Not all MFP supporters will vote for Mr Wiroj as they might be swayed by Mr Chadchart while Mr Suchatvee's personal popularity exceeds that of the Democrat. However, his rating has come down somewhat from 10% to 8-9% after he came under attack on social media.

Mr Phichai said the candidates were trying to position themselves; Mr Chadchart as an executive and academic with a can-do attitude, Mr Wiroj as a problem-solver and Mr Suchatvee as a new-era, technology-oriented management guy.

For political strongholds, the MFP and PPRP have almost equal portions of support in Bangkok although the PPRP's popularity is tied to that of Prime Minister Prayut Chan-o-cha. A slump in the premier's ratings and the fact the PPRP may not field a candidate, means the party's support will be split among Mr Suchatvee, Pol Gen Aswin and Mr Sakoltee.

"By the looks of it, the support base for Mr Chadchart and Mr Wiroj is more dense than that for the other group," he said.

As far as campaign policies are concerned, they must address longstanding, general issues including road traffic, pollution and economic welfare as well as responding to specific population groups such as the elderly and young people.