Rainbow of hope loses its lustre

Protesters hold up a placard as activist Phromsorn "Fah" Weerathamjaree and his partner Pete Titat Kuantrakul (not in the picture) attempt to register an application to wed despite Thailand not recognising same-sex marriages during a mass marriage registration event on Valentine's Day in Bangkok on Feb 14, 2022. (AFP photo)

Despite recommendations by the UN Human Rights Council's Universal Periodic Review (UPR) of the need to promote gender equality in Thailand, authorities are still yet to afford LGBTQ citizens the right to marry and start a family.

In contrast to the country's reputation as an LGBTQ paradise where gender diversity is publicly accepted, advocacy groups say efforts to promote LGBTQ rights and marriage equality in Thailand face resistance from conservative elements within the government and religious organisations.

For Permsap "Dao" Sae-Ung and Puangphet ''Phet" Hengkham, this year's Songkran festival was not just a holiday for celebrating the traditional Thai New Year -- it was also a special anniversary marking 14 years since they started their relationship as a nonbinary couple.

Even though they were both born female, they live like any normal heterosexual married couple. Dao said they are blessed to be surrounded by supportive friends and family, who understand and accept their same-sex union.

They live a relatively peaceful life in the northern resort town of Pai in Mae Hong Son, where they run a small coffee shop.

However, no matter how natural their spousal relationship might seem, their union is not recognised by the authorities, as same-sex couples cannot be legally married under Thai law.

According to the Civil and Commercial Code, marriage can only be contracted between a man and a woman.

Same-sex couples, moreover, are excluded from the legal rights and benefits that accrue to legally married couples, which means they cannot perform joint legal and financial actions as a couple such as borrowing money from a bank to buy a house.

"Without marital status, we are just two unrelated people in the eyes of law," Dao said.

"This is very clear injustice and discrimination against LGBTQ people since we are deprived of our rights to form a family. We can't even make a critical medical decision on our spouse's behalf in case of emergency." 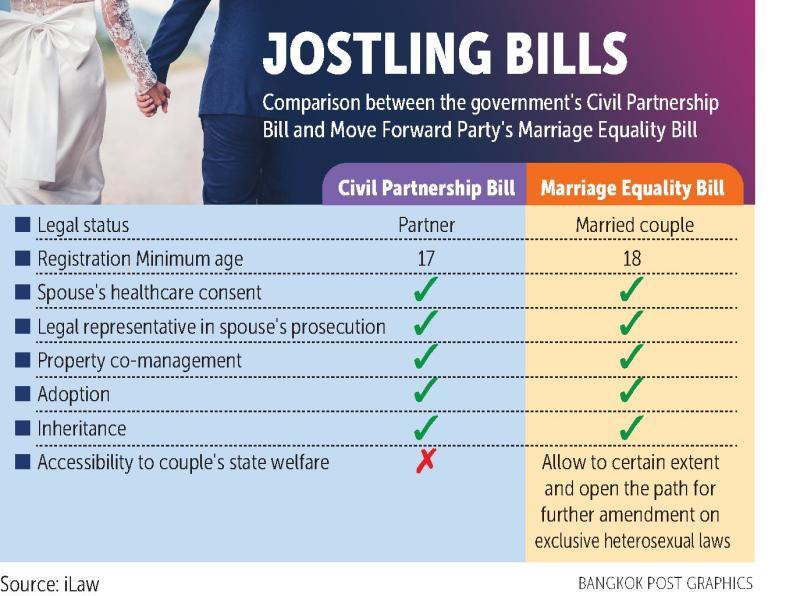 Such an emergency situation was exactly what the couple faced seven years ago, when Phet was injured in an accident and required urgent surgery.

Despite Dao being there at the hospital and wanting doctors to go ahead with surgery, she had no rights as a next-of-kin to sanction the operation.

"I was angry being unable to do anything to save my partner. I had to travel across the province to pick up Phet's elderly mother from her home in Chiang Mai just to authorise the surgery," Dao said.

"This is when I became set in my determination to campaign for equal marriage rights for LGBTQ people in Thailand."

Dao and Petch later led an effort to file a petition with the Constitutional Court in November 2019 asking it to rule on whether the law that restricts LGBTQ+ groups from registering their marriage violates the constitution.

They were, however, to be disappointed. Two years later the court decreed that the restriction under the Civil and Commercial Code that bars same-sex couples from being married was not a violation of their rights to be treated equally before the law and protected from unjust discrimination on the grounds of gender.

These are the Civil Partnership Bill, drafted by the Rights and Liberties Protection Department, and the Marriage Equality Bill, proposed by the Move Forward Party. Both bills have and continue to face many obstructions and delays.

For the Civil Partnership Bill, the measure was sent back to a focus group discussion process last year, after government whips raised concerns over religious sensitivity.

Meanwhile, the Marriage Equality Bill was rejected by the cabinet last month on grounds that it shared many similarities with the Civil Partnership Bill.

Nada Chaiyajit, a member of the Thai Sang Thai party's working group on LGBTQ rights, said Thailand promotes itself to the world as LGBTQ-friendly, but the logjam on the bills shows the government does not actually intend to promote rights and equality for LGBTQ people.

"LGBTQ rights groups have been pushing for marriage rights for over a decade, but none of these campaigns ever make much progress, let alone accomplish their goal," Ms Nada said.

She said this is mainly because of opposition from the powerful conservative establishment in state agencies, the government and religious organisations.

"Some religious groups started gathering names to oppose this bill as it goes against religious principles and this is the biggest challenge for those trying to get it passed because they are influential in society," she said.

"The public space for campaigning for rights and equality is also diminishing, as the government is using many means, including a weaponised Disease Control Act, to suppress political activism and any campaign for human rights and democracy."

Considering the recent dismissal of a petition signed by over 700,000 people calling for a lawsuit to be filed against the prime minister for Covid-19 mismanagement, she said the government is unlikely to comply with calls to reform discriminatory laws despite the Rainbow Coalition for Marriage Equality having already gathered more than 302,000 signatures in support of the Marriage Equality Bill.

Chompoonute Nakornthap, who assisted in the drafting of the Civil Partnership Bill, however, said authorities have a genuine intention to legalise same-sex marriage, although complications regarding religion, tradition and the country's finances may hinder the effort.

Ms Chompoonute admitted that the bill will not grant same-sex couples the same rights as their heterosexual counterparts.

However, this can be an advantage, as it may help the bill to obtain approval more easily considering the country's financial situation.

"This bill is more likely to be passed than the other bill because it does not involve state finances so much, so it would be better if we accepted this bill as it is since we can revise it later on," she said.

Domestic advocacy groups aren't the only ones pushing the government for action. The international community has also urged the government to listen to the Universal Periodic Review (UPR) on marriage equality in Thailand, Ms Nada said.

"In the third cycle of UPR for Thailand last November, LGBTQ rights and marriage equality were among the human rights issues brought up for discussion," she said.

"France, Iceland, Luxembourg and the Netherlands suggested Thailand amend the Civil and Commercial Code, which would grant same-sex couples the same rights as heterosexual couples."

The UPR is a political platform where reports on human rights around the world are presented to the Human Rights Council (HRC).

The HRC acts as a global community witness to human rights situations. and state members join hands to provide recommendations on what needs to be done among them to improve human rights.

A state whose human rights situation has been reviewed can comment on the recommendation, choosing to "accept" or "note" them. Thailand has "noted" all recommendations regarding marriage equality.

"Choosing 'accept' implies the country is ready to take action. On the other hand, choosing 'note' does not mean rejection, it shows the country's unreadiness or unwillingness to deal with the issues," she said.

"There is no way to guarantee the government will enact the marriage equality law, but the government should keep in mind that the international community is keeping its eye on the gender equality situation in our country," she added.