What about the UN? Coming down off that high
Thailand
Special Report

What about the UN? Coming down off that high

Kob, a university student, has grown cannabis plants in his room to make pressed dried cannabis for sale over the past two years.

He was eagerly awaiting last Thursday's regulation change decriminalising the plant, as he wants to expand his distribution channel from among his dorm peers to more customers on social media.

"My hobby can turn to be a legal job. I will further improve my product quality and will educate my customers on how to use cannabis properly,'' he said.

Thailand is the first country in Southeast Asia to delist the cannabis plant from the government's Category 5 narcotics list, following the publication of a Ministry of Public Health announcement in the Royal Gazette.

Only cannabis oil extracts containing more than 0.2% of tetrahydrocannabinol (THC) -- the psychoactive ingredient responsible for feelings of euphoria -- are still considered a Category 5 substance, regulated by narcotics control and suppression laws.

"Decriminalising cannabis marks a new chapter in Thailand's history,'' said Public Health Minister Anutin Charnvirakul, leader of Bhumjaithai Party who pushed to legalise home-grown cannabis and hemp to promote the plants as cash crops and the wider use of cannabis plants for medicine, food, wellness and tourism.

People are now allowed to grow cannabis plants at home. Since Thursday, more than 564,000 people have signed up with the Food and Drungs Administration to grow the plant.

Soon the Department of Agriculture will start the process of handing out 1 million cannabis plants to 500,000 interested families to promote quality cannabis plants among users.

"Cannabis has a high value in terms of health benefits and prices. It is like [green] gold that should be promoted,'' he said. 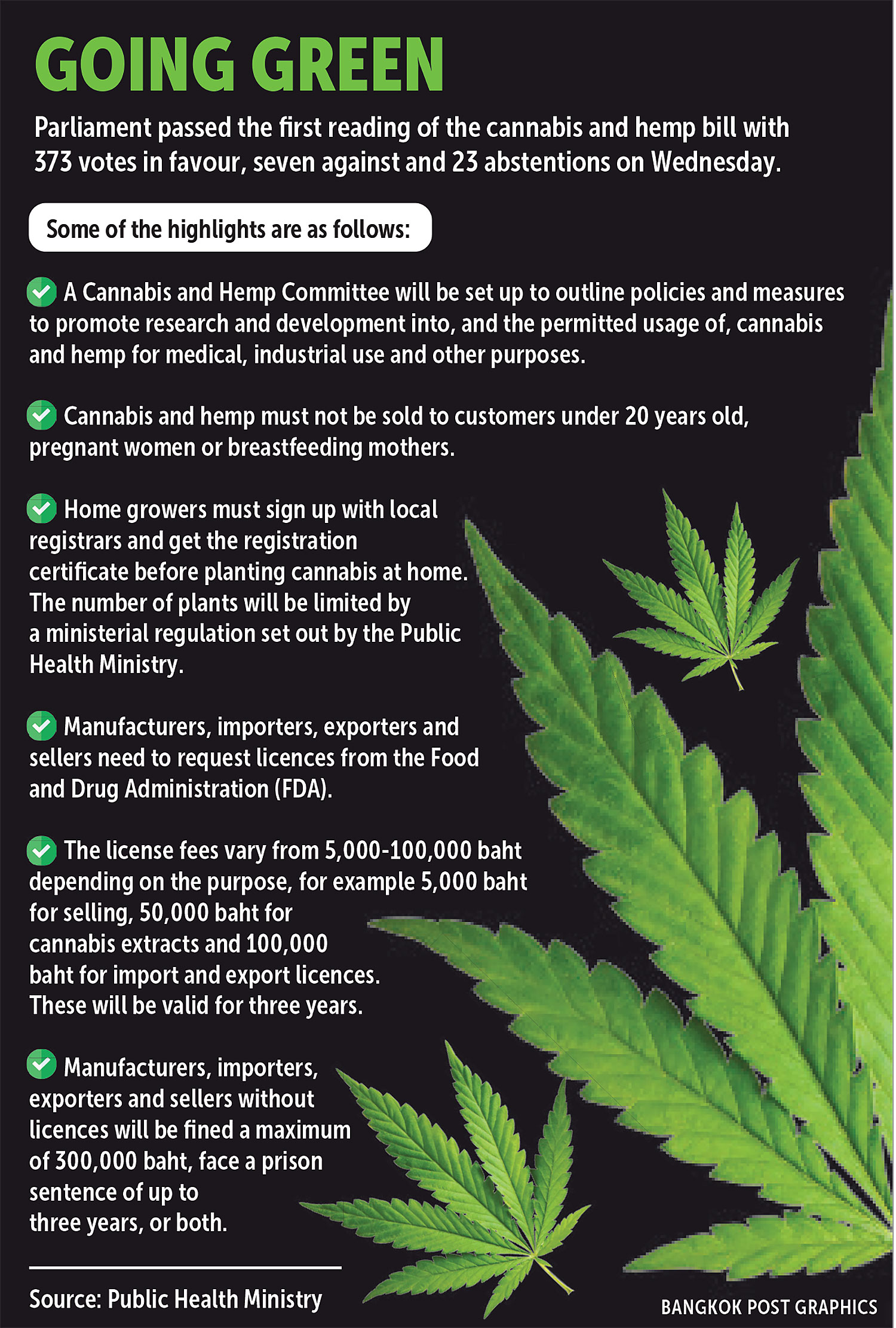 Boost for the economy

She said the local cannabis industry is in its infancy with a market value estimated to be a few billion baht, while the global market value has reached 800 billion baht following the legalisation of cannabis in several countries for research and medical purposes.

However, the industry will grow further after the delisting, with the market value of the food and beverage sector likely to reach ten billion baht and the cosmetic industry, around several billion baht, she said. Cannabis can play a role in both.

According to Ms Unarin, 16 listed companies have entered the cannabis space and they are expected to capitalise from the move. It is thought that some of these companies will export cannabis-based products.

She said delisting hemp and cannabis from the Category 5 narcotics list is also welcome news for business operators as they can now bring the plants to public events to educate the public about proper use.

Even though cannabis extracts are legally allowed and used in medical treatment, cosmetics products and food, some people seem focussed on its use for recreational purposes, she said.

As for consumers, they will have a variety of products to choose from and these products are examined by the Food and Drug Administration, she said. Home growers seeking to use cannabis as medicine need not to worry about being arrested any more, she said.

Ms Unarin said an oversupply of hemp and cannabis is unlikely as cultivating them is not easy and pests can be a big problem for cannabis farmers. Cannabiz Way grows about 75,000 hemp and cannabis plants on a 9,000 square metre plot of land in Saraburi.

Wilai Khampimul, a member of Ban Nonmalai community enterprise and a grower of cannabis, said there are still legal procedures required to run a cannabis business.

Local villagers also will face various limitations when it comes to commercial growing, he said. Mr Wilai grows only six plants which are supplied to hospitals under a health project.

"I don't think commercial growing is for me because I don't know anything about marketing. And it's hard to compete with those who have tens of thousands or millions to invest. They have their suppliers," he said.

Mr Wilai said he is not sure about current cannabis prices but they are known to have dropped significantly from over 10,000 baht per plant to just below 1,000 baht per plant. He said he is not excited about the delisting, which simply means that growing the plant is no longer illegal. The change is likely to benefit investors rather than farmers. 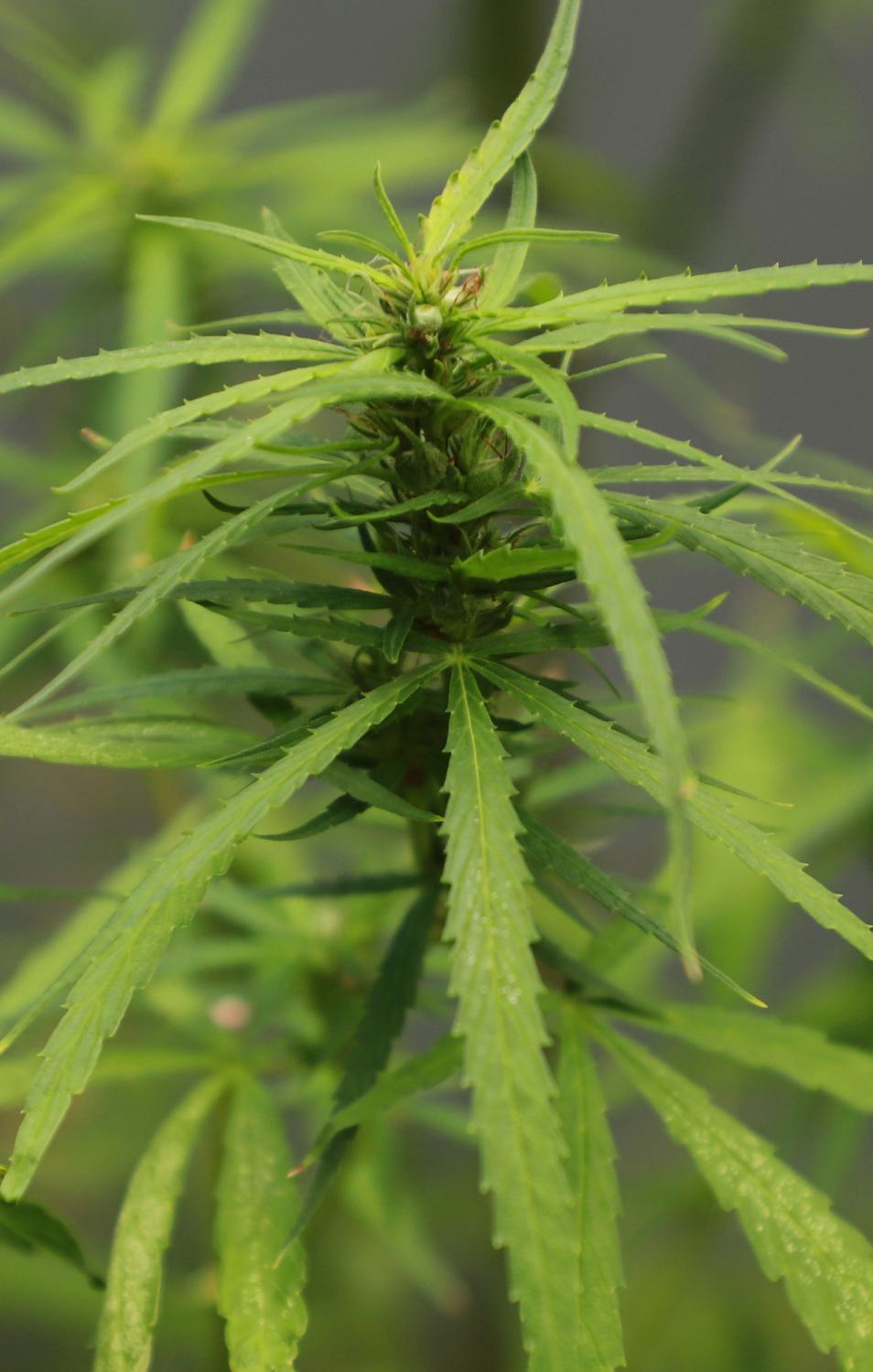 Spice of life: Fresh and dry cannabis can be used to enhance flavours.

Viroj Sumyai, adviser to the International Narcotics Control Board (INCB), said Thailand will be asked to answer to the United Nations after delisting cannabis.

The UN will also examine the country's draft law on cannabis and hemp and if it decides the bill violates the 1961 Convention on narcotic drugs, Thailand will be required to take corrective steps and report back, he said.

"If those steps aren't implemented, the INCB will ask for a resolution from the general assembly. If it is found the country's (growing) areas will lead to illicit drug trade, it will make an announcement before the Economic and Social Council. And the rest of the world will learn from an annual report that we violate the treaty," he said.

If this happens, other countries will downgrade relations to pressure Thailand, as is the the case with some Latin American countries where coca production areas expanded hugely, he said. Coca is the raw material used to make cocaine.

The next step will involve enforcement of regulations on medicines that are covered by the drug treaty, particularly those with codeine as an ingredient. As a result, the country must apply to use these medicines and provide estimates of anticipated consumption.

"I believe several international bodies including the United Nations Office on Drugs and Crime are keeping a close watch on our cannabis policy," said Mr Viroj.

The Narcotics Control Board (NCB) admitted there are concerns about impacts from the delisting because Thailand is a signatory of the 1961 treaty on narcotic drugs, which classifies cannabis as a narcotic but permits its use under supervised medical conditions.

Even though the legalisation is for medical and research purposes, an associated bill on hemp and cannabis has yet to be passed into law. Flowers and buds have high THC (tetrahydrocannabinol) and must be classified as narcotic drugs.

"Under the bill, flowers and buds will be regulated. But because the bill is not passed into law yet, the Foreign Ministry has some concerns when it has to explain the issue to INCB and Asean countries. There is also a question about how to prevent an influx of cannabis from neighbouring countries and the possible impacts of our cannabis policy on our neighbours," said the NCB.

As the country waits for the bill's passage, the Ministry of Public Health has asked state agencies to enforce the Plant Quarantine Act and Plant Varieties Act to regulate imports of cannabis flowers and buds and seeds. "There is no clarity concerning sales and possession. As for consumption, even though the cannabis policy doesn't allow recreational use, the bill seems to allow it.

"Currently we don't have a law on cannabis use either, so we rely on public health rules. Under the new law, sales of cannabis to young people will be prohibited, so what can be done for the time being is to warn and educate people about proper use," said the NCB. The legalisation of cannabis may also affect other countries' confidence in Thai drug suppression and prevention policy especially when the country is on the Commission on Narcotic Drugs.

A network of academics and civil groups against drugs has expressed concerns about what they call policy vacuum -- a lack of legal tools to regulate misuse of cannabis, especially among youngsters. In countries where cannabis is allowed for recreational use, strict controls such as limiting the number of plants -- six in Uruguay and four in Canada -- are in place.

Cannabis products must follow strict packaging regulations with a warning and are sold at authorised venues where children are not allowed. All promotion is banned and cannabis tax measures are also in place. In Canada and the US, there are reports about a rise in consumption of cannabis among youth and adults and a hike in hospitalisations due to consumption.

Vichai Chaimongkol, secretary-general of the ONCB, said use, cultivation and possession of cannabis are no longer illegal and the agency has no authority over the matter following the delisting.

But users of cannabis may be subject to public health control regulations if the smell or smoke from their use bothers other people, he said. "As for concerns involving the international treaty, the agency has informed the Foreign Ministry about the bill on hemp and cannabis which will be the legal tool to prevent misuse.

"As it is no longer a narcotic drug, the ONCB has no authority to take legal action. Possession isn't illegal either because the Public Health Ministry says it's not a narcotic drug. People are free to smoke or do anything," he said.