Queen Elizabeth II and her husband, Prince Philip, arrive in Thailand for a five-day visit.

The Bangkok Post is deeply saddened by the death of Her Majesty Queen Elizabeth II. To commemorate the longest serving British monarch, we revisit a story about the British monarch and Prince Philip, the Duke of Edinburgh, her consort, during their five-day state visit (Oct 28-Nov 1, 1996) to Thailand.

Her Majesty Queen Elizabeth II renewed her acquaintance with Thailand for the first time in 24 years yesterday.

The British monarch and the Duke of Edinburgh, her consort, who are on a five-day state visit, were greeted at Don Mueang airport by Their Majesties the King and Queen.

Hundreds of people, Thais and foreigners, watched the greeting before the King and Queen accompanied their royal guests to motorcade.

From the airport, they went to Maha Jesadabodin Pavilion, where city officials were in attendance. Thousands of people lined Ratchadamnoen Avenue waving the tri-coloured Union Jack and Thai flags.

Silence descended moments before the motorcade arrived at 3.40 pm. Queen Elizabeth, in an emerald green dress and hat, stepped out of the car, drawing expressions of delight and excitement from the crowd. 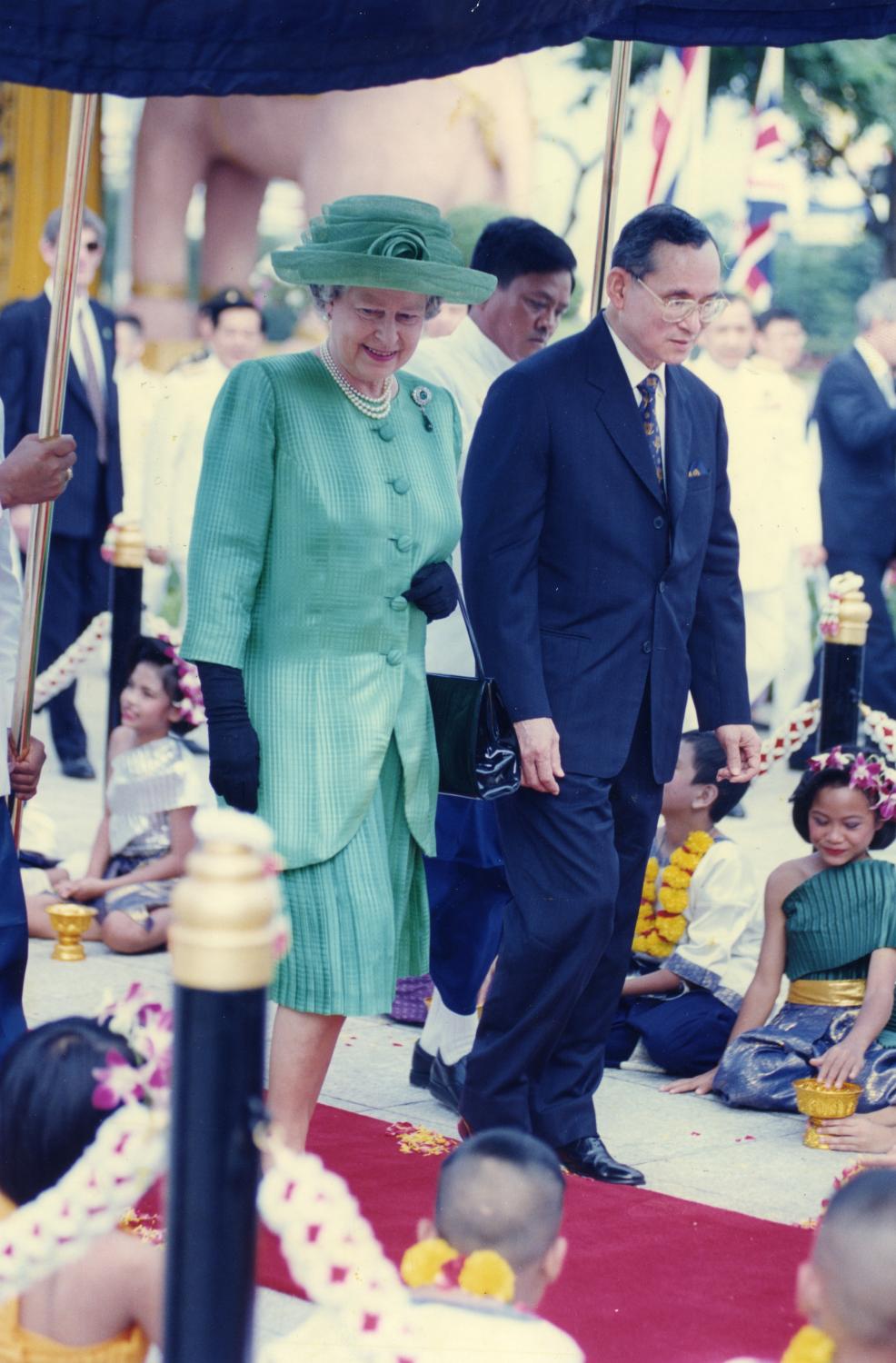 Her Majesty Queen Elizabeth II accompanied by His Majesty the King at Don Mueang airport after her arrival in Bangkok on Oct 28, 1996.

On behalf of Bangkok, Governor Bhichit welcomed the monarch and presented her with a key to the city.

The key is gold-plated, eight inches in length engraved with the emblem of the city showing Indra, keeper of Amarawadi heaven, atop Erawan, the white elephant.

In response, Queen Elizabeth thanked the people of Bangkok and expressed pleasure at a welcome that was as friendly as in 1972.

She said she arrived in Bangkok then by river, but this time she entered the city from the newly-expanded airport. From the short drive, the UK Queen said Bangkok had changed almost beyond recognition.

She said she was glad the city, despite modernisation, had retained its rich cultural heritage which would be enjoyed not only by Thais but by an increasing number of overseas visitors, including Britons.

"I am sure the citizens of Bangkok, in facing up to the demands of modern living, have lost none of their warmth and humour,'' she said.

The Queen told Mr Bhichit he had been elected governor of one of the great cities of Asia and had accepted a responsibility both exciting and rewarding.

She also wished the governor and the people success in continuing to make Bangkok a thriving and happy place in which to live in years ahead. After the ceremony, the King and the Queen accompanied Queen Elizabeth and Prince Philip to Boromabhiman Mansion, where they will stay. 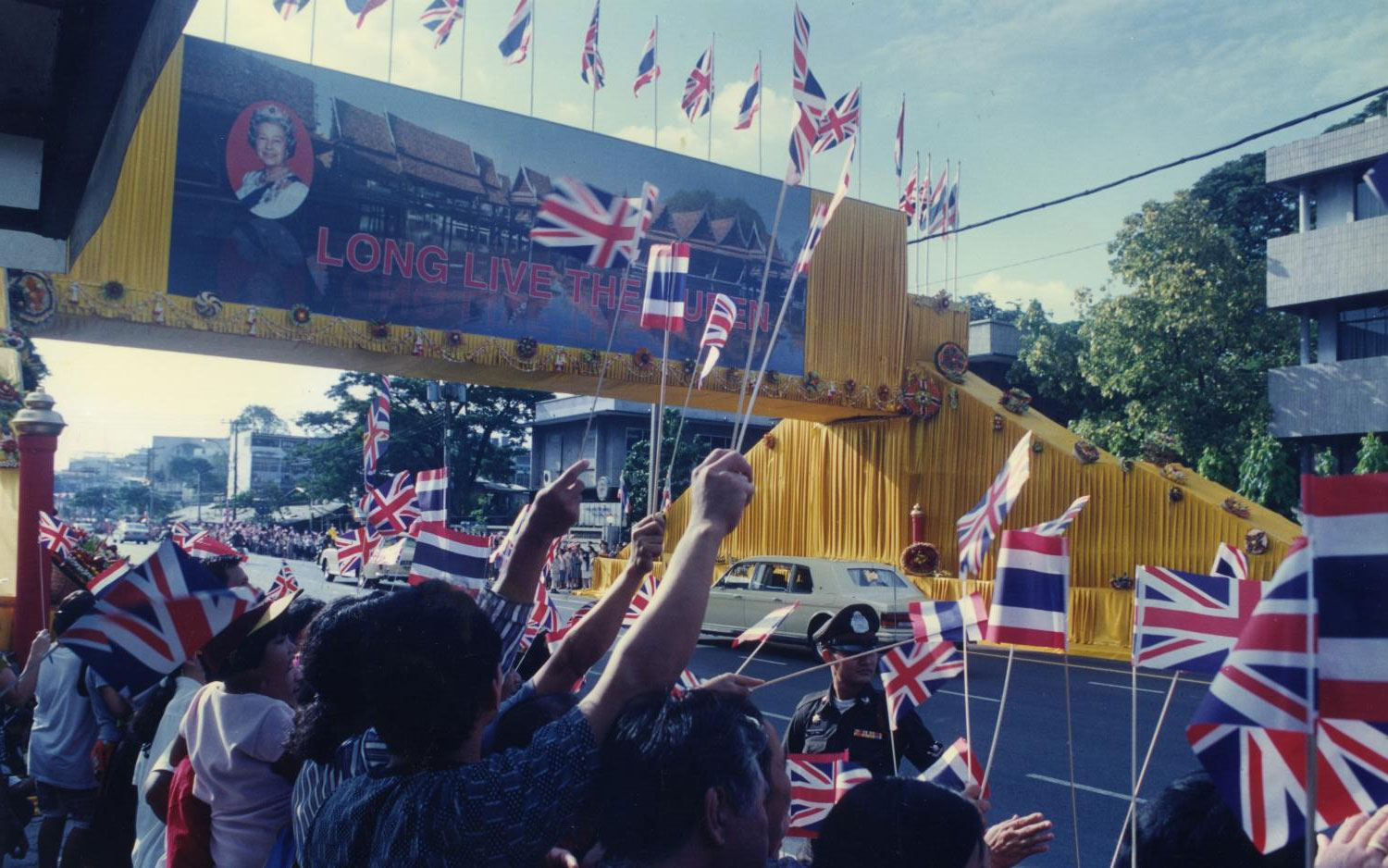 Most people in the crowd expressed delight for a chance to welcome the royal visitors even though many of them did not have a clear view. Porntip Pimcharoen, 57, and her daughter, from Min Buri, had arrived at Rajdamnern at 5am but missed seeing the Queen because she left her spot for a few moments just as the motorcade arrived.

She said, however, she was glad to be there. "As a Bangkok citizen, I'm glad she has come here. It will be a long, long time before she comes here again. I keep reading about her in the newspapers every day.''

Having missed her chance, Mrs Porntip said she would try again. At Boromabhiman Mansion, Queen Elizabeth and Prince Philip gave an audience to Thai and foreign journalists. As the gathering was a social event, press coverage was not allowed at the request of Buckingham Palace.

The royal visitors have a busy itinerary.

Today's engagements include a visit to Ayutthaya where they will view ancient temples, floating lanterns on the Chao Phraya, a light and sound display at the old capital and a private dinner with the King and Queen. 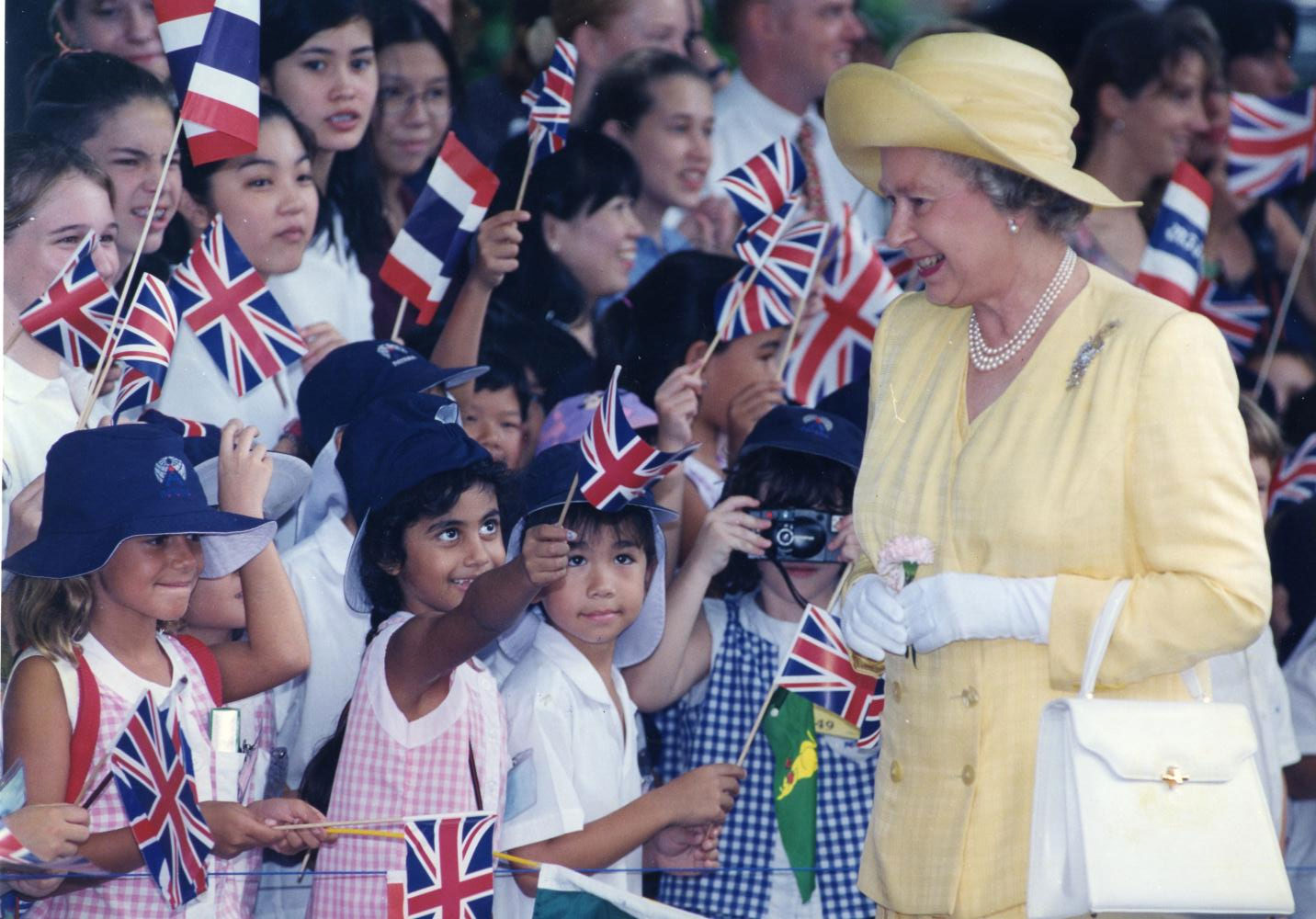 Her Majesty Queen Elizabeth II visits the British Embassy. She is greeted by students from the Bangkok Patana international school, bearing UK, Thai and even their own countries' flags.