Plan in works to save Songkhla Lake's last pod

The cabinet's recent decision to approve the construction of a 4.48-billion-baht bridge across the Songkhla Lake is causing alarm among environmental activists and authorities alike, with many questioning if the project will ultimately spell the demise of the last pod of 14 Irrawaddy dolphins who call the lake home.

In a move meant to address concerns about the bridge's impact on the endangered dolphins' survival, the Department of Rural Roads and the Department of Marine and Coastal Resources will launch a scheme to protect the rare cetaceans as plans for the bridge move forward.

The move was announced by Natural Resources and Environment Minister Varawut Silpa-archa on his Facebook page. In a post on Friday, he said he had talked to the deputy dean of Kasetsart University's Faculty of Fisheries, Thon Thamrongnawasawat, along with other members of the university's Department of Marine Science to discuss a grant for dolphin conservation studies that will be funded by some of the budget for the bridge.

"I assigned the Marine and Coastal Resources Department to study a sustainable solution to protect the habitat of [Songkhla Lake's] last pod of 14 dolphins," he wrote.

Mr Varawut added he will propose his conservation plan to the permanent secretary of the Ministry of Natural Resources and Environment (MNRE) and work with other stakeholders to conduct further research on the issue.

Irrawaddy dolphins are listed in Appendix I of the Convention on International Trade in Endangered Species of Fauna and Flora (Cites), which forbids commercial trade in species that are threatened with extinction.

The bridge will link tambon Koh Yai in Songkhla's Krasae Sin district to tambon Jong Thanon in Phatthalung's Khao Chaison district. Sources from the Department of Rural Roads (RRD) said they have discussed measures to protect the dolphins when the underwater part of the construction is underway with the Marine and Coastal Resources Department.

The MNRE also will join hands with the Transport Ministry to monitor the construction and prevent accidents that might affect animal habitats in Songkhla Lake.

The MNRE will also be responsible for developing a clear goal to conserve Irrawaddy dolphins and ensure a healthy environment for animals living in Songkhla Lake.

Reports say the RRD chief had met the chief of Marine and Coastal Resources Department (MCRD) to assist the ministry's conservation plan.

The directors-general of the departments are working to establish an environment protection and conservation centre in Songkhla Lake to tackle the threats facing the endangered Irrawaddy dolphins.

During the construction phase, the RRD will install steel casing pipes and silt shields around the foundation to prevent construction material from contaminating the lake.

Also, there will be buoys which prevent the dolphins from approaching construction sites.

The department also plans to increase food sources for the dolphins in other areas to encourage them to settle in a different area.

Mr Thon, the marine biologist whose advice the MNRE minister sought, previously aired his concerns that the bridge's construction might affect the endangered Irrawaddy dolphins in Songkhla Lake.

"The freshwater Irrawaddy dolphins can only be found in five places around the world. The 14 dolphins that live in Songkhla Lake are the smallest pod," he wrote.

"Even though the bridge is not built over the dolphins' habitat, there might be some other consequences from food, machine noise and changes to the underwater environment," he added.

He emphasised that tailoring a solution to conserve wildlife species takes interdisciplinary collaboration and time.

The cabinet endorsed the 4.84-billion-baht bridge across the Songkhla Lake on Oct 18.

At the meeting, the cabinet also approved the construction of a bridge in Krabi's Koh Lanta worth 1.85 billion baht.

The bridge connecting Songkhla and Phatthalung will be seven kilometres long.

The bridges are expected to improve logistics between cities on the Andaman coast and the Gulf of Thailand side via Trang, Phatthalung and Songkhla.

Construction of both bridges are expected to start at the end of next year and finish in 2026. 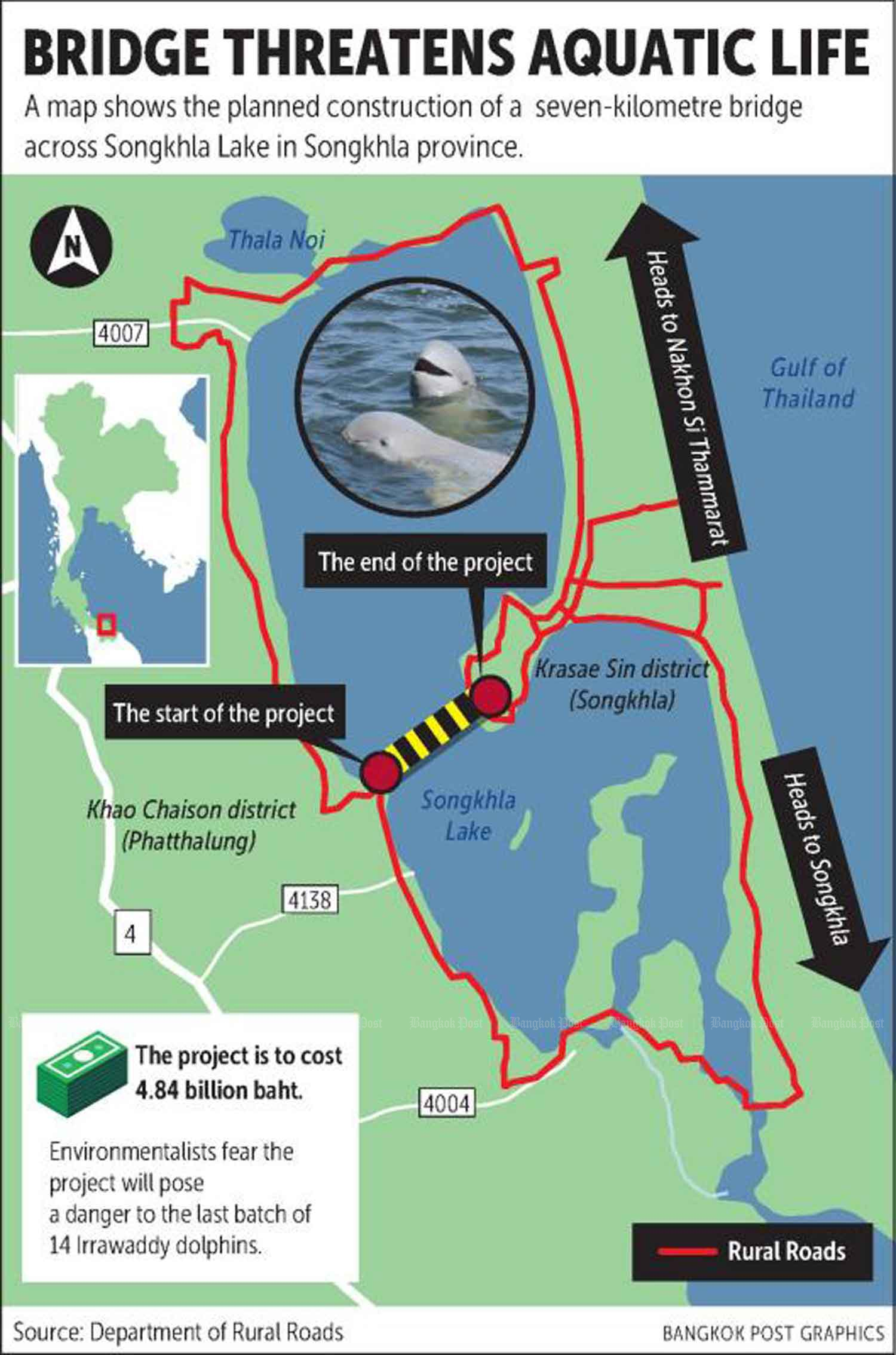