Fleeing back to the provinces
Thailand
Special Report

Fleeing back to the provinces

SPECIAL REPORT: Poor find it too pricey living in Bangkok

A street food vendor on Chakkraphet Road in Phra Nakhon district takes a lunch break as she waits for customers. She said the cost of living in Bangkok is rising, forcing everyone to tighten their belts. (Photo: Apichart Jinakul)

Workers in Bangkok who live from hand to mouth have decided to return to their hometowns as the cost of living in the capital becomes unaffordable.

They said expenses in Bangkok have doubled compared to before the Covid-19 pandemic. After deducting expenses, there is almost nothing left to save.

Capping the price of more essential commodities would help low-income workers, they said.

Nee (surname withheld), 49, a papaya salad shop owner on Prachasongkroh Road, told the Bangkok Post that prices of most fresh ingredients -- meat and vegetables -- are reaching 100 baht per kilogramme. "[The price rises] have gone too far," Ms Nee said.

Even though the cost of ingredients is rising, shopkeepers still have to keep prices down. Ms Nee said price rises would make her lose her customers.

"Each item costs about 20–30 baht except for chicken drums that are 40 baht each. People will not buy if the price is too high," she said. 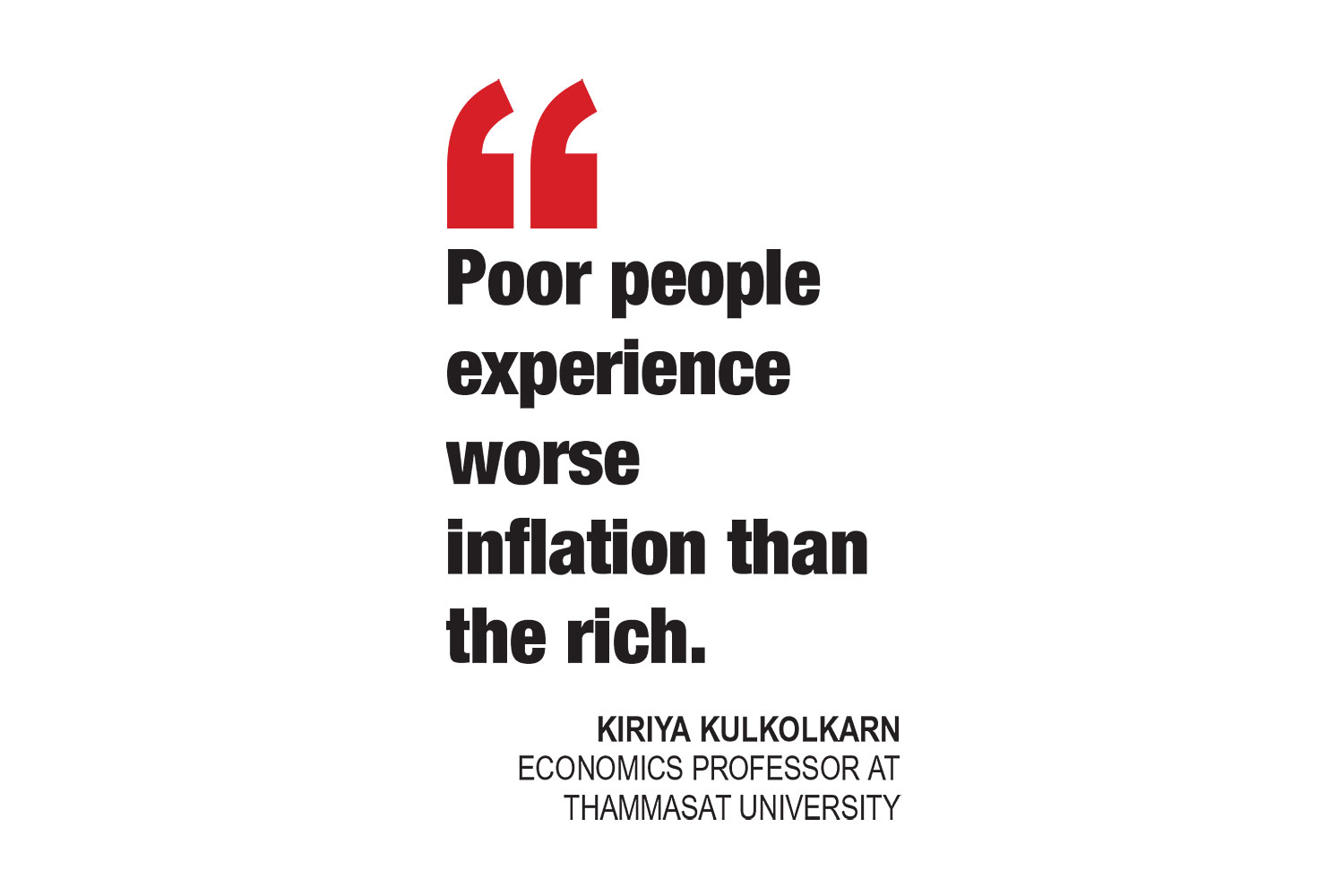 "Profits I make will go on ingredients, my personal expenses and my son's school fees. I try to remain economical and avoid unnecessary expenses," Ms Nee said.

She said her husband died two years ago during the Covid-19 outbreak.

Since becoming a single parent, Ms Nee has to wake up at midnight to prepare the food that she sells the next morning. Everything on the menu has to be made before 5.30am when her shop opens.

"The price of commodities is going up and it affects poor people like us. It would be better if there was a price cap so we can at least get through it," Ms Nee said.

Noi, 60, was a food retailer at a shopping mall on Ratchadaphisek Road of Bangkok who planned to return to her hometown after New Year after she retired.

Even though her employer asked if she wanted to carry on working, Ms Noi said she preferred to retire.

Her one-time retirement payout was worth 60,000–70,000 baht and Ms Noi said it was the largest amount of money she has ever had in her savings account.

Ms Noi said the cost of living in Bangkok forced her to leave the capital. Her rent is 5,000 baht monthly and travel from home to work costs 4,000 baht.

Her 12,000-baht salary was not enough to afford living in the city.

She said she would go back to Chon Buri province and live with her daughter. Together they can help the family's business and Ms Noi no longer has to pay the rent and bills.

Tuk, 48, a seamstress, said that when the recession began, many customers would show up and ask her to repair their clothes. Ms Tuk said that she understands people have to tighten their belts when the cost of living is rising.

Her daily wage goes mainly on food for herself, her husband and her child.

Ms Tuk said her expenses still outstrip her income, forcing her to turn to loan sharks.

Kiriya Kulkolkarn, an economics professor at Thammasat University, said raising the minimum wage might not improve the situation in the long run as poor people experience worse struggles during inflation than the rich.

She said the inflation rate of 7% might not be solved by a 5% raise in the minimum wage as issued by the wage committee of the Ministry of Labour.

"Some 45% of income if you are poor goes on food while rich people only spend 27% of their income on food. Poor people experience worse inflation than the rich," said Prof Kiriya.

The purchasing power of the poor will go up to 333 baht per day due to a recent rise in the minimum wage, an increase from 318 baht per day from the former rate which held for 10 years, she said.

"The 15-baht difference will give poor people another 3,960 baht extra per year which is 4.72% of their income. But if we take a look at 10-year GDP growth, it has gone up 20%. This proves that poor people's income grows more slowly than the economy does," Prof Kiriya said.

The increase in the minimum wage would not lead to inflation as many feared. However, raising the minimum wage is not the best solution to provide wealth to the poor across the country either.

Prof Kiriya suggested Thailand strive to implement a wage dependent on price mechanisms rather than a fixed rate.

"Entrepreneurs should level up their businesses and services by integrating technology to augment their products. At the same time, providing more skills to workers will also increase their wages," she said.

Another key factor in restructuring the economy and the labour market is unionisation. Prof Kiriya said unions empower workers to negotiate with their employers.

The government, for its part, should tackle monopolies and corruption in corporations, and ensure the poor get help through the state welfare card.