On Jan 11, five teenagers in Si Sa Ket province were arrested for shooting and killing an innocent woman. They later confessed to police that they were involved in a conflict with other teenagers in the village and one of them, in a rage, got hold of a gun and fired randomly into the woman's house, killing her.

PARTY’S OVER: Six teenage boys who escaped from a remand home in Nakhon Ratchasima province to take part in the Loy Krathong festival are returned to custody. PHOTO: PRASIT TANGPRASERT

In Nakhon Ratchasima province four teenagers aged 14 to 18 were arrested last year for the rape of a 14-year-old girl in her own home. Among last year's most shocking news reports was that of an 11-year-old boy drowning his four-year-old sister in a pond near their house in Bangkok, also out of anger.

Most incidents involved drugs, followed by property theft or damage. According to the department, the number of children arrested for drug offences accounted for 33.25% of all drug crimes last year, up from 21% in 2010.

Worryingly, the number of young people charged with possession or use of firearms and explosives has increased steadily, from 933 cases in 2001 to 2889 in 2010. 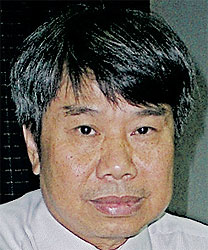 Assistant professor Chankhanit K Suriyamanee, a lecturer on criminology and criminal justice at the Mahidol University's social sciences and humanities faculty, said these statistics reflect only a small part of the problem.

''A large number of offences are never reported to the police. Therefore there are no records.

''Negotiation is often an alternative to going through the police and the court system, to save the reputation and image of a young person or a learning institute,'' said Mr Chankhanit.

In most countries, authorities set an age at which young people can be held criminally responsible for their actions and try to rehabilitate youthful offenders through a juvenile justice system to keep them from becoming habitual criminals as adults.

Thai law sets the age of criminal responsibility at 10, but breaks youthful offenders into several age groups. Those aged 10 to 15 appear before a juvenile court judge but are not normally subject to legal punishment. They may be reprimanded but are usually returned to the care of parents or legal guardians on the condition that they do everything to prevent the child from further misbehaving.

If the court feels it is inadvisable for the offender to remain at home, the youngster will be placed in the care of a court-appointed guardian or non-governmental organisation.

Offenders 15 to 18 years old face trial in juvenile court and if found guilty are handed over to remand homes and training centres where the focus is supposedly on rehabilitation. Courts determine the duration of their stay.

Those over 18 but not yet 20 will be tried in adult criminal court and if found guilty will normally serve time in prison, but be segregated from the rest of the population. Moreover, sentences may be significantly reduced or suspended at the judge's discretion. 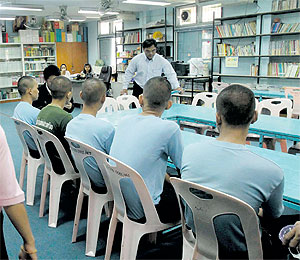 RED CARD: Reporters speak to youths at the Ban Metta juvenile detention centre who allegedly took part in the red shirt rallies and were arrested for violating the emergency law.

Thawatchai Thaikeo, director-general of the Juvenile Observation and Protection Department, said that his office will soon propose amendments to sections 73 and 74 of the Criminal Code to increase the age of criminal responsibility from 10 to 12 to bring Thailand in line with a recommendation by the UN Committee on the Rights of the Child adopted at the 18th session of the United Nations Human Rights Commission, held last September in Geneva. Thailand has already endorsed the resolution.

Mr Thawatchai said he would ask Justice Minister Pracha Promnok to consider raising the minimum age before the end of the month.

Mr Thawatchai told Spectrum that in 2008 the cabinet approved a ministry proposal to raise the age of criminal responsibility to 12, with the support of other government agencies and NGOs involved with children. But the National Legislative Assembly changed the age limit to 10, reasoning that younger children were committing more serious offences.

The move was a disappointment to Mr Thawatchai.

''Studies show that children younger than 12 do not clearly understand what is right or wrong. They lack maturity and they do not understand the consequences of their violent actions. They should be under a scheme to help them become better people,'' said Mr Thawatchai.

According to his department's statistics, only about 2% of youth offenders are under the age of 12.

The director-general said Thailand has improved its juvenile justice system in recent years, for example by enacting the 2010 law which established the Juvenile and Family Court. The law also clearly states the guidelines for justice proceedings for young offenders. Provisions include a requirement that young offenders be separated from adult offenders during interrogations and court proceedings. Moreover, those under 18 are not to be detained in prisons. However, said Mr Thawatchai,''if they cannot improve themselves and continue to act violently in the homes, they will be sent to the prisons'', adding that about 0.7% per year of those in homes and training centres are sent to prisons.

Mr Thawatchai said that for the juvenile justice system to work the court needs information about offenders' families, their home environments, their behaviour and their mental health. These factors should be used to determine how long the offenders stay in remand homes and training centres.

Some critics feel Thailand is too lenient with youthful offenders and are calling for harsher punishments, reasoning that this would cut down on repeat offenders and also deter their peers from crime. On the other side are those who feel that the emphasis should be on rehabilitation.

Mr Chankhanit said it is important that the juvenile justice system find the right balance between punishment and rehabilitation, and that Thailand focuses too much on the latter. 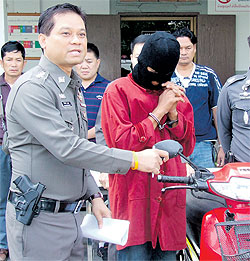 ''We focus only on rehabilitation, but some youthful offenders may feel no remorse for what they have done,'' he said.

Last year Mr Chankhanit conducted research on juvenile repeat offenders. He found that ''apart from a generally bad community environment and troubled families, repeat offenders almost always have a problem with self-control. The remand homes and the training centres need to set up an intensive programme to build self discipline to prevent recidivism.''

He cited cases in which young offenders have snuck out of remand homes to commit crimes before returning to the centres. Almost two years ago, six young offenders living in a remand home in Khon Kaen province left the home undetected and raped a teenage girl. They were caught before they were able to return to the home.

Some people in a community near that remand home in Khon Kaen say they were living in fear. Noorak Yanprasert, village head of Ban None Muang, said robberies are frequent. ''The police and villagers cannot catch them because they sneak back into the home. But they were caught this time [following the rape], so we believe that others from the home had also committed robberies and hurt people.''

''However,'' said Mr Noorak, ''from time to time some boys sneak out because they miss home or whatever. The home officials call us to help them locate the boys. People in the community may see them first, and we send them back.''

Mr Thawatchai said that rehabilitation and reintegration into society are given special emphasis out of a concern that the young people could become institutionalised in remand homes. ''In the remand homes, they are given food, clothes and other necessities. They may lose their ability to depend upon themselves if they stay too long,'' he said.

He added that those who commit offences while staying at remand homes or training centres will face stronger penalties, but those who are willing to improve their attitudes and behaviour should be granted the opportunity for early release so that they can have the chance to lead normal lives.

Mr Thawatchai said the ratio of young offenders from stable and broken families is fairly equal. Many affluent parents fail to keep their children in line, while many children from broken homes find affection and warmth elsewhere.

Mr Thawatchai said his department and other government agencies have launched an in-depth project to study the motives and behavioural patterns of young offenders, and are training officials to make use of the information. ''The new system is a tool to help us identify risk factors. We then can implement measures or programmes on a case by case basis. Then young offenders will be less likely to go out and commit new crimes,'' said Mr Thawatchai. 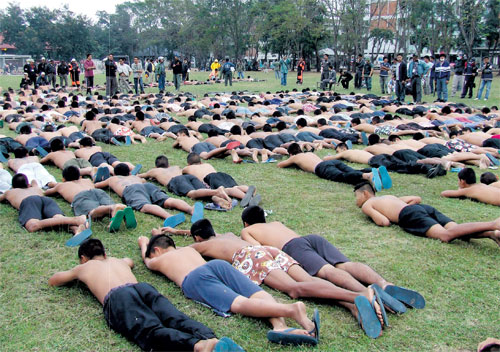 GROUND ZERO: Male teenagers are forced to lie face down at a Nakhon Ratchasima detention centre after their recapture following a mass escape in December, 2008. Inmates also set fire to three buildings at the facility.