Are zoos cashing in on tiger trade?
Thailand
Special Report

Are zoos cashing in on tiger trade?

Privately owned wildlife parks have long been implicated in the illegal sale of endangered animals and animal parts, but the lack of a DNA database and difficulty in collecting information means there is little clear evidence to confirm the suspicions

Trade and trafficking in tigers and tiger parts in Thailand drew international attention following the seizure of 400kg of tiger meat and carcasses in Bangkok's Khlong Sam Wa district earlier this month. It's remained a thorny issue in Thailand despite global efforts to save the animals from extinction. 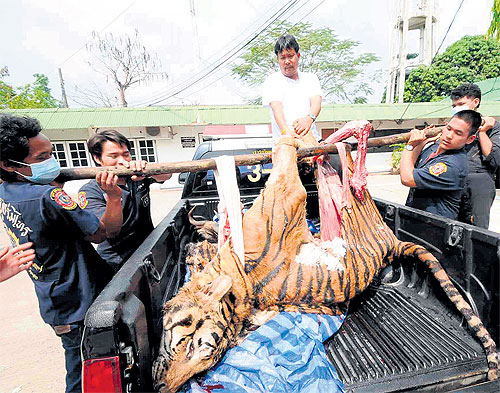 SENSELESS SLAUGHTER: This tiger was found after police inspected a slaughter house in northeast Bangkok on Feb 5.

All five remaining tiger subspecies are considered seriously endangered and three subspecies have vanished in the last 60 years. In addition to human encroachment into their habitats, this is also driven by a demand for tiger parts which are believed by some to bring health and vitality.

In Thailand, despite protective measures the poaching of wild tigers in national parks and wildlife sanctuaries continues, and more seizures of tigers and tiger parts _ believed to be mostly from tigers bred in captivity _ indicate that consumer demand is growing.

There has been no substantial evidence proving the involvement of private zoos and wildlife parks in Thailand in supplying tigers and tiger parts to the black market, but suspicions remain because of the large sums of money to be made in the trade and the high costs of running these operations. Private zoos are legal in Thailand under the 1992 Wildlife Conservation and Protection Act and are allowed to possess wildlife species listed as preserved and protected under the act. There are currently 15 preserved species and 1,302 protected species recognised under Thai law.

Operators of private zoos must first obtain a zoo licence (Sor Por 21) and also a temporary permit to possess wildlife species (Sor Por 2) from the National Parks, Wildlife and Plant Conservation Department. Of the 40 licensed private zoos in the country, 21 raise and breed tigers.

The 1992 act strictly outlaws trade in tigers or tiger parts, and moreover, tigers are protected by the UN Convention on International Trade in Endangered Species (CITES), which prohibits international trade in protected animals, animal parts and derivatives for commercial purposes.

This means that the private zoos cannot buy or sell tigers or other restricted animals to each other or to anyone else. Private zoo owners usually say their animals were in their possession before the restrictions were in place or are the offspring of such animals. Transfers of animals between licensed private zoos are also allowed with approval from the National Parks Department, but this is a complicated process.

As the number of private zoos has grown, the National Parks Department has tightened the regulations for issuing new licences for the zoos, and concerned government agencies have also stepped up suppression efforts against smugglers. CLAWS FOR RELIEF: Left, this female was rescued from a tiger trafficking gang in April last year and is now under the care of the Khao Prathap Chang Wildlife Sanctuary in Ratchaburi.

Last year, government officials rescued two leopard cubs (which are also protected) at a place that had been designated for a new private zoo in Chaiyaphum province. The owner had not yet obtained a licence from the National Parks Department. Earlier, two adult leopards were seized at the same location. The owner could not provide any documents to show where he obtained the animals. According to a National Parks Department official, the leopards were taken from the Huay Kha Khaeng Wildlife Sanctuary in Uthai Thani province. The department withdrew the owner's application for a licence to set up a zoo.

National Parks Department deputy director-general Theerapat Prayoonsit said that his department cannot prohibit anyone from applying for a licence to set up a private zoo. However, he added, the department closely monitors the population of tigers in each zoo to ensure that they are not sold to traders.

At present, 888 tigers from 21 private zoos are registered with the department, which is also responsible for recording the identity of each tiger. Si Racha Tiger Zoo in Chon Buri is the largest operation of this type in the country, holding about 400 tigers.

Noting that the law does not limit the number of animals a zoo may keep, Mr Theerapat said, ''What we can do is ask for cooperation from the zoos to limit their tiger populations and give them good care.''

However, he added, the zoo owners may ''fiddle with'' the number of tigers. ''For example, if four cubs are born, they report only two. So they can sell the other two cubs or raise them in another place,'' he said. ''If anything happens to these tigers we cannot trace them back to the zoo.''

Pol Col Kiatipong Khaosam-ang, deputy commander the Natural Resources and Environmental Crime Suppression Division (NED), agreed that this is a big problem. ''This is the easiest method used in promoting the illegal tiger trade,'' he said.

''When a tiger dies, the [private] zoo will not report to the authorities as required. It is sold in the black market, and a new tiger is brought to the zoo.''

Following the large seizure of tiger meat and carcasses in early February, National Parks Department officials and police inspected private zoos in Chon Buri, including the Million Years Stone Park, Pattaya Crocodile Farm and Si Racha Tiger Zoo. The latter had been accused before of involvement in the illegal trade in tigers and tiger parts. However, said Mr Theerapat, his department was able to account for all tigers there. 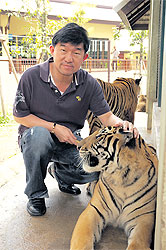 NICE KITTY: Right, Chuwit Pitakpornpallop, owner of the Trakarn Tiger Zoo in Ubon Ratchathani province, with one of his tigers.

Chuwit Pitakpornpallop, owner of the Trakarn Tiger Zoo in Ubon Ratchathani province, said that domestic licensed and regulated tiger zoos are always the first place authorities look to make arrests or seize live tigers whenever this type of case surfaces. But he said that licensed private zoos are always open for inspection from authorities, and added that National Parks Department regional officials regularly inspect his zoo every two or three months, along with police from the NED.

The inspection covers all kinds of preserved and protected wild animals in the zoo, he said. ''They will check the animals' microchips, take photos of each animal and check its documents, and look at records of births and deaths. They also take DNA samples,'' said Mr Chuwit.

However Kanita Ouitavon, a senior scientist at the department's Wildlife Forensic Science Unit, said the National Parks Department does not have DNA samples from private zoos.

There is a plan to start a DNA database in the near future, an initiative Ms Kanita fully supports. Such a database would make it much easier for the department to fulfil its mandate to keep track of all protected animals in the possession of private zoos. This issue was at the forefront of Interpol's ''Third Meeting of the Wildlife Crime Working Group'' in Bangkok from Feb 13-17. The group endorsed DNA testing as a way to stamp out trade in wild meat by tracing the origins of seized meat. At the meeting, assistant national police chief Chalermkiat Sirworakan said, ''We need the help of forensic medicine in the suppression of wildlife crimes,'' and added that DNA testing and establishing a relevant database was not a complicated procedure. He suggested that the Natural Resources and Environment Ministry fund the programme.

Meanwhile, Mr Chuwit said authorities should be looking elsewhere than at private zoos, and challenged them to inspect big livestock farms, especially those along the borders, where he says tigers are illegally bred and traded in the black market.

''For instance, a big cattle farm in Kanchanaburi province and an unlicensed tiger farm in Saraburi province breed and slaughter tigers for sale,'' he said.

Another significant source of trafficked tigers is farms in neighbouring countries such as Malaysia and Myanmar, said Mr Chuwit.

''Tigers are transported through Thailand, Laos and Vietnam to China. The tigers and tiger parts which are often seized in Phetchaburi and Prachuap Khiri Khan provinces are from farms along the borders inside neighbouring countries,'' he said.

Mr Theerapat agreed that many tigers seized in recent years have been smuggled from neighbouring countries.

During the past few years smuggled tigers and other wildlife have been found in trucks carrying fruits and other goods from the South. The drivers have told authorities that they were to deliver them at Talad Thai market in Rangsit, on the outskirts of Bangkok. Mr Theerapat said the market has huge cold storage warehouses.

Pol Colonel Kiatipong Khaosam-ang, NED deputy commander, said Thai authorities can and do seek cooperation from government agencies in neighbouring countries, but added that it is also necessary to strictly control the domestic facilities because some of them supply tigers for illegal breeding and slaughter.

Mr Chuwit admitted that in spite of regulations requiring private zoo operators to inform authorities of births and deaths, some domestic tiger zoos do not report the actual figures. He blamed it on the ''time-consuming process'' of obtaining legal transfer permits which allow private zoos to exchange animals. These are granted only in rare cases.

''In some cases, a private zoo urgently wants tiger cubs for show to attract customers. Under such circumstances, unregistered tiger cubs can be easily transferred to licensed zoos,'' he said. However, this doesn't happen very often because most zoos can easily breed their own cubs.

Mr Chuwit said that another situation that encourages illegal trading among private zoos is the exchange of adult tigers to avoid problems from captive inbreeding and keep the animals genetically healthy. Tigers grow very fast and can mate when they reach three years old, he said, and because getting legal approval is usually a long process, some zoo owners buy unregistered cubs and register them as newborns at their zoos.

But he said that selling or trading unregistered cubs is ''not worth the risk''. If caught, the zoo must pay a heavy fine and may be closed down.

''And forget about an exchange of tigers with zoos in foreign countries. After problems occurred in the transfer of 100 tigers from Si Racha Tiger Zoo to China many years ago, the National Parks Department won't allow any private zoos to import or export tigers,'' said Mr Chuwit.

At present his operation has possession of 48 tigers at Trakarn Tiger Zoo and 54 at Tiger Kingdom, an offshoot zoo in Chiang Mai's Mae Rim district. Each year an average of 10-15 tiger cubs are born in captivity at the two zoos. With the increasing number of tigers he plans to supply two more private zoos in the near future, one in Phuket and one near Suvarnabhumi airport on Bang Na-Trat Road. He looks on this as a good business move that also solves the expensive problem of caring for too many tigers. Mr Chuwit said that private zoos facing financial problems often separate males and females, but each has its own way of dealing with the matter. 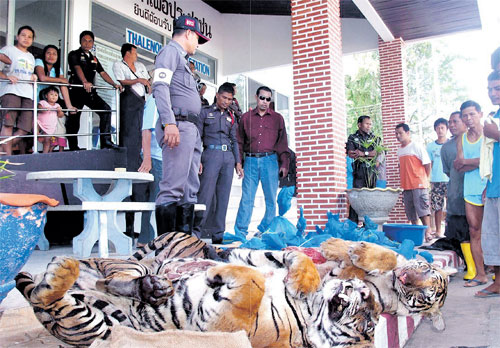