Temple troubles: Thailand and Cambodia at the ICJ

A lack of clarity in a 1962 ruling by the International Court of Justice has led to decades of dispute and wrangling over the ancient site. The question now is whether or not the court will agree to issue a reinterpretation of its 50-year-old decision

Lawyers for Thailand and Cambodia have completed their oral arguments as the International Court of Justice (ICJ) considers Cambodia's request to reinterpret its 1962 judgement on the dispute surrounding Preah Vihear. 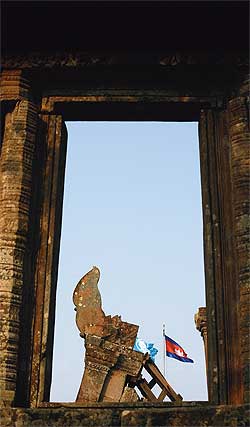 The dispute's re-emergence in 2007 is owed largely to nationalist political forces, particularly the yellow shirt movement in Thailand. Nevertheless, the feud is founded on a legitimate legal disagreement, which the parties are now litigating precisely where they should - before the ICJ. A closer look at the legal issues suggests a path to resolution of a largely unproductive conflict.

The current controversy focuses on the border in the area around the temple. The 1962 judgement awarded the temple complex to Cambodia and required Thailand to withdraw security forces at the temple or ''in its vicinity on Cambodian territory''.

The ICJ reasoned that Thailand had accepted as binding a 1907 map of the frontier prepared by French cartographers, which placed the temple on Cambodian soil. However, the ICJ did not define the vicinity of the temple or discuss the legal status of the 1907 map in its operative part, which sets forth the ICJ's conclusions.

Thai lawyers argued that the ICJ's 1962 conclusions pertained only to the temple and the immediate surrounding area. They contended that Thailand obeyed the judgement by pulling its security forces just outside the temple grounds and that Cambodia had accepted that state of affairs. Thus, they asserted, there is no debate to justify an ICJ reinterpretation.

Cambodian lawyers countered that a dispute does exist and that the judgement gave the 1907 map line binding effect, because the ICJ's 1962 conclusions were inseparable from its reasoning. Thus, they claimed, both the temple and the 4.6 square kilometre strip directly to its west belong to Cambodia.

As it considers the pleadings, the ICJ faces two basic legal questions. Does a dispute exist between Thailand and Cambodia that justifies a reinterpretation of the 1962 judgement? And if the court does reinterpret the judgement, should it find that all or part of the 1907 map is binding?

Cambodia should prevail on the first question. The court found in 2011 that a dispute appeared to exist between the parties, and nothing in the recent oral proceedings should lead the judges to decide otherwise.

Under relevant jurisprudence, there is no statute of limitations on an ICJ reinterpretation, and a dispute need not be made formal to exist. A dispute must simply pertain to the operative part of the judgement or reasons that are deemed to be ''inseparable from the judgement''. 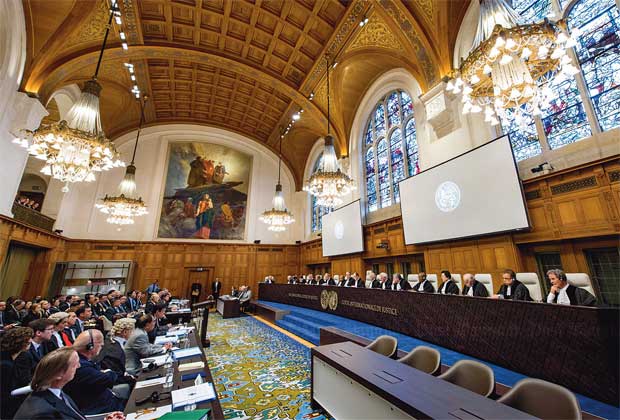 PASSING JUDGEMENT: The United Nations’ highest court on April 15 presides over the Preah Vihear temple dispute between Cambodia and Thailand.

The parties' submissions to the ICJ since 2011 demonstrate, at a minimum, that they interpret differently the operative clauses' references to ''Cambodian territory'' and the ''vicinity'' of the temple. Moreover, Cambodia's counsel presented numerous pieces of evidence to show that the interpretive dispute is hardly new; throughout the 1960s, Prince Norodom Sihanouk and others indicated their disapproval of Thailand's stationing of personnel and erection of a barbed-wire fence in the disputed 4.6 sq km strip. 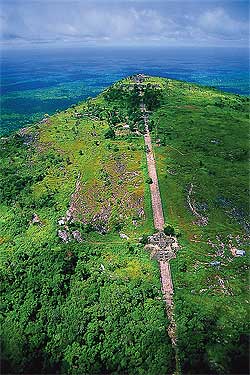 BORDER CONFLICT: Thailand and Cambodia both claim ownership of a strip of land around Preah Vihear. HOTO: BANGKOK POST ARCHIVE

The more difficult question is whether - or to what extent - the court's reasoning should be read into the binding conclusions of the 1962 judgement. As Thailand's lawyers have emphasised, the court expressly declined Cambodia's request for a ruling on the legal status of the 1907 map in the operative part of the judgement.

Thailand argues, not unreasonably, that this omission demonstrates that the court saw the status of the border and fate of the temple as separable legal questions and that Cambodia simply seeks a ruling the court denied it in 1962. This argument is nevertheless problematic.

As Cambodia's counsel argued in The Hague, one cannot give effect to references to Cambodian ''territory'' in the operative clause without knowing where that territory is. To decide sovereignty over the ''disputed area'' - which the court defined as ''the region of the temple of Preah Vihear'' - the court declared that the ''real'' and ''essential'' question in the case was ''whether the Parties did adopt the [1907] map, and the line indicated on it, as representing the outcome of the work of delimitation of the frontier in the region of Preah Vihear, thereby conferring on it a binding character''.

After a lengthy analysis, the court found ''in favour of the line as mapped [in the 1907 map] in the disputed area''. That placed the temple on Cambodian soil and, according to Cambodia's lawyers, makes this part of the court's reasoning inseparable from its conclusion. Cambodia's argument that the judgement renders the entire border line drawn on the 1907 map also encounters problems. Although the term ''Cambodian territory'' requires some reference to the court's reasoning with respect to the border, the court clearly did not purport to deal with the entire Thai-Cambodian frontier, but merely a particular disputed area.

This, taken alongside the court's refusal to issue a pronouncement on the status of the 1907 map in its operative clause, weakens the case for reading the entire map into the court's conclusions.

The real crux of the dispute is whether the 4.6 sq km area west of the temple can be considered part of ''its vicinity on Cambodian territory''. The Thai legal team has argued that Dean Acheson, counsel for Cambodia in the original case, characterised the area in dispute as ''very small''. However, Mr Acheson's Thai counterparts objected to references to the ''region'' or ''neighbourhood'' of the temple as potentially too expansive.

The 1962 judgement offers regrettably little guidance. Its lack of clarity has contributed to instability and makes its reinterpretation necessary and appropriate.

The court could have ordered only that Thailand withdraw troops ''at the temple''. Its addition of a reference to the temple's ''vicinity'' shows that its conclusions were intended to pertain to some area beyond the perimeter of the temple buildings.

Even if that area extended a few hundred metres to the west, as the Thai map suggests, the question would arise: Was that part of the temple's vicinity Thai, or was it Cambodian?

The Thai reading of the judgement suggests that the answer would depend on agreement of the parties. However, since agreement between the parties was lacking, the provision would have effectively no force in the western vicinity of the temple - an area where the court knew that some Thai personnel were located.

Although the court declined to pronounce on the border in the disputed area in its operative part, that part can only be understood through reference to the court's finding that the parties had accepted the 1907 map.

Under this reasoning, areas in the temple's ''vicinity'' on Cambodia's side of the 1907 map line fall into Cambodian ''territory''. The most sensible way to define the relevant vicinity would be to confine the scope of the judgement to the smallest contiguous territory under dispute to the immediate west of the temple - namely the 4.6 sq km strip. With that important limitation, the court should find for Cambodia.

The messiness of these legal questions reflects the ambiguity of the original judgement, which regrettably left enough room for continuing interpretive disagreement and discord between the two countries. Whichever side prevails in court, both governments would do well to respect the judgement.

For Cambodia, an international legal ruling clearly provides the fairest forum in which to resolve a conflict with its larger, more powerful neighbour.

For the government of Yingluck Shinawatra, a hard fought legal encounter provides insulation against domestic nationalist demands for action, even if the ruling is unfavourable. Indeed, both sides have been ably and zealously represented in court.

An ICJ decision on the issue offers both a useful watershed - a chance to shift away from contentious politics of the recent past, which help rally some constituents behind the flag but do little for the longer-term interests of their populations.

John Ciorciari is an assistant professor at the Gerald R Ford School, University of Michigan, and senior legal adviser to the Documentation Centre of Cambodia.