Elephant slaughter: The gangs get bold

In early March, Kaeng Krachan National Park chief Chaiwat Limlikhit-aksorn was outraged to learn of another elephant killing in the area he oversees. A female elephant about 15 years old was discovered close to Krarang 3 Reservoir shot in the head and brutally axed, milk still flowing from her breast. Investigators reasoned that the elephant had a baby with her at the time of the killing. 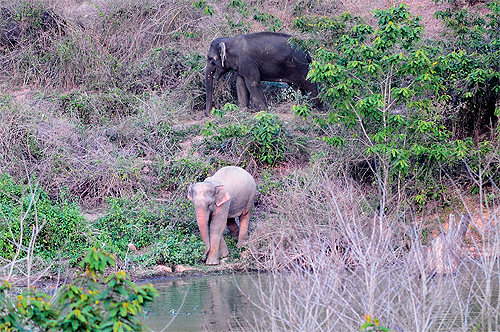 WHITE FLIGHT: Park officials suspect that this elephant, photographed on April 10, might be a rare white elephant. There is also speculation that it could be the calf of an elephant found butchered in Kaeng Krachan in early March. Park officials are concerned that a white elephant could become a prime target for poachers PHOTO: COURTESY OF APICHAT PUANGNOI, CHIEF EDITOR OF THE PETCHPOOM NEWSPAPER IN PHETCHABURI PROVINCE.

What happened to the calf remains subject to conjecture. Some suspect it was sold into the illegal wildlife trade. Other officials contend that the calf is the same elephant pictured in a widely circulated photograph taken on April 10 that many believe is a rare white elephant. If that were the case, the calf would be a hugely desirable target for poachers.

An extensive manhunt was conducted over rough terrain and two suspects were arrested.

On April 9 a similar, even grislier incident came to light when a female elephant was found in the park with gunshot wounds to her head, leg and womb. When park staff examined the carcass, they found that her breast and her vagina were cut out, and there was a dead, almost full-term calf in her womb. Parts of elephants' reproductive organs are believed to have supernatural value and are used in Buddhist amulets and images. 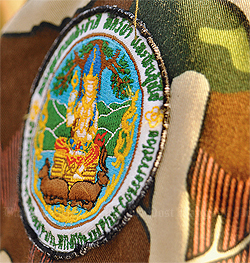 Mr Chaiwat said poaching has become much more organised in the park than when he first took office five years ago. ''Only in the past few years have we witnessed clear patterns indicating organised activity,'' said Mr Chaiwat.

It may be that previous elephant deaths attributed to natural causes were also the result of poaching. In any case, it's obvious the killings this year and in recent years were well planned.

Reports compiled by the Kaeng Krachan National Park office and the nonprofit Wildlife Conservation Society say there have been at least seven elephant killings since 2009. In that year an elephant was reportedly electrocuted in the southern part of the park in suspicious circumstances, and later a male was found shot dead.

In late 2010, another male elephant was shot dead. and in early 2012 two male elephants that had died of gunshot wounds were also discovered. in one of these cases, the elephant had its tusks, trunk and sexual organs cut off. the other case involved a younger elephant that allegedly had its tusks removed.

Following these discoveries, park officials accepted that organised poaching gangs were at large in the park and began investigations to root them out. Several clashes between park rangers and poaching gangs have resulted.

Mr Chaiwat and his rangers have made inroads in finding informants in forest villages, cooperation they consider crucial to putting a stop to poaching inside the park. 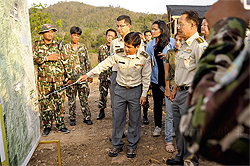 On the strength of their information, park officials think Kaeng Krachan's long western border with Myanmar is a major part of the problem.

Every year, said Mr Chaiwat, members of ethnic groups cross the border and take up residence inside the national park with relatives who may live there legally because they predate the park's declaration.

The park chief says that some of those coming from Myanmar are former prisoners who have just finished forced service hauling provisions for the army. Once they finish their sentences they are set free and walk over into Thai territory. They are then received by people associated with the poaching gangs and armed with weapons powerful enough to bring down elephants.

Some villagers inside the park act as liaisons between the poachers and wildlife buyers, as well as weapons suppliers, Mr Chaiwat said. He added that they are often community leaders and that helps explain why they seem to be aware of park officials' movements.

Mr Chaiwat said there are about 250 elephants in the park divided into two main populations, one in the Phetchaburi River watershed zone and the other in the southern part of the park in the area locally known as La-ou Forest.

Poaching networks operate in both areas, and they also have connections in nearby Ratchaburi province. 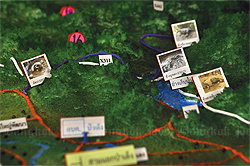 GRAPHIC DISPLAY: A model showing locations where elephants have been killed on display for visitors at Krarang Reservoir 3.

If the poachers are hunting elephants for their parts, they will will be killed ruthlessly and what's desired will be cut off. Likewise, mothers and even ''little sisters'' in the herd will be gunned down in order for the poachers to get to the babies.

Arrests and prosecutions have been very difficult due to a lack of direct evidence. However, defendants in the first case cited from last year involving the killing and butchering of an adult male elephant, five people, all locals, were found guilty in court. Two of them were convicted of killing the elephant, while the other three were found guilty of possessing elephant parts.

In the second case involving the killing of a young male elephant, a complaint was filed against a former deputy park chief for negligence in disposing of the animal's remains. The elephant's tusks were allegedly removed after it was discovered, although the deputy chief insisted they were burned along with the carcass. The official was disciplined.

''The problem is now too big for us to solve alone,'' said Mr Chaiwat, ''considering the size of the area and our limited human resources. It's time to mobilise resources from various government agencies to help tackle the problem.

''If you asked me how much damage has been done from this activity, I would say we cannot put an exact figure on it. One thing's certain though, we must safeguard the country's biodiversity.''

Some conservationists believe that the solution to eradicating elephant poaching lies in better park management and the cooperation of people living inside the park. The Wildlife Conservation Society has been working with Kaeng Krachan National Park for almost 10 years and helped park officials to develop ''smart patrols'' that yield better data collection from the field. This has identified threats to wildlife in the park.

Manoon Plio-sungnoen, a research scientist for the Wildlife Conservation Society who has been involved in the elephant programme at Kaeng Krachan for three years, said the park offers ideal conditions for poachers. 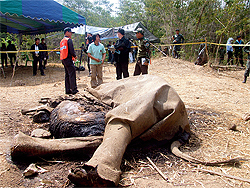 DOUBLE DISASTER: This mother elephant was killed on April 9; her dead calf was found in her womb. COURTESY PF KAENG KRACHAN NATIONAL PARK

Comprehensive patrols by rangers are made difficult by the sheer size of Kaeng Krachan, the country's largest national park with nearly 3,000 square kilometres, compounded by the narrow north-to-south layout dotted with settlements.

The long border with Myanmar is another complicating factor, he said.

Mr Manoon said all of these factors make it easy for people with bad intentions to escape the notice of rangers. A manpower shortage compounds this problem. At present there are about 100 rangers overseen by four top officials, including the park chief.

Mr Manoon said the rate of forest encroachment doesn't appear to be increasing, but clashes between elephants and humans are on the rise as the areas they live in overlap.

He said this is particularly evident in in La-ou Forest, where elephants often come out of the forest and damage villagers' crops.

Mr Manoon said this problem must be resolved before it escalates and fuels even more poaching. While defences against elephant trespassers are being developed around communities, it is also necessary to raise awareness among locals so they can interact more responsibly with the animals.

Surapon Duangkhae, former secretary-general of the Wildlife Fund Thailand and current vice-president of Elephant Friends of Thailand, said considering the park's limited resources cooperation from communities around and inside it is essential.

He said park officials need to change the way they interact with locals to ensure their cooperation when it comes to animal preservation.

Some key issues come into play here, he said.

Forced relocations of people living within the park, for instance, draw the rancour of locals. Adopting a ''softer'' approach to this problem would go a long way to fostering ties with people in and around the park.

A clear forest policy that opens the way for cooperation and participation by locals would also benefit those responsible for protecting the forests.

''I think elephant poaching [in Kaeng Krachan] is nothing new, although it has become harsher,'' said Mr Surapon, adding that ''finding the solution depends a lot on how we manage both our limited resources and relationships with the people living in the area.'' 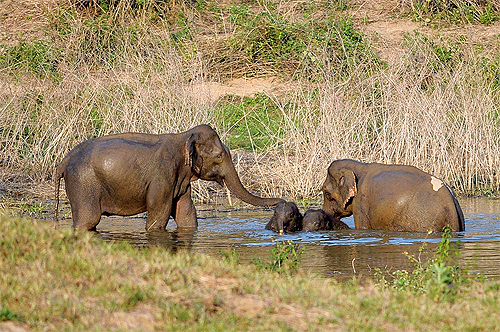 EXPOSED ELEPHANTS: Elephants like these at Krarang Reservior 3 are increasingly prone to attacks by poachers when they are out in the open. COURTESY OF APICHAT PUANGNOI 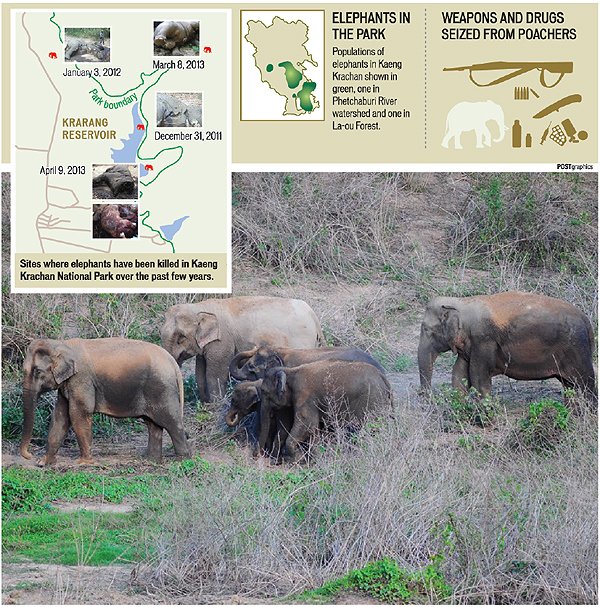 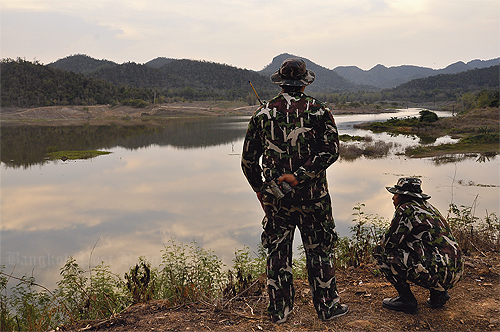 WHITE WATCH: A park ranger on the lookout at Krarang Reservoir 3 for a rare white elephant that was reportedly spotted in the area.