Those streaming across the border to Mae Sot for help illuminate how, despite reformist pledges, Myanmar's hospitals are ailing

Naw Mu Htoo is constantly leaking urine. A gentle 16-year-old, she's already had a stillbirth and moves by wheelchair _ if she moves at all. She can't stand, or her catheter pulls out.

PAINFUL JOURNEY: Top and above, Naw Mu Htoo is bed-ridden and incontinent after delivering a stillborn child in Kayin state, where she could not access adequate medical care. PHOTOS: JUSTIN HEIFETZ

"She's constantly wet, she's constantly incontinent and she has no way to control her urine. The catheter isn't sufficient so she has a sheet to help protect her and the bed," says Samantha Carter, programme analyst at the Mae Sot-based Burma Children Medical Fund (BCMF).

The bed Ms Carter refers to is a hard wooden table. It's covered with a simple woven mat for some comfort and translucent blue plastic, which Naw Mu Htoo is resting on. These beds fill basic inpatient facilities at Mae Tao clinic, the BCMF's partner _ where it was established seven years ago.

The BCMF is swamped with patients like Naw Mu Htoo. As it becomes easier for Myanmar nationals _ most from Kayin and Mon states _ to cross the border into Mae Sot, more seek medical treatment either unavailable to them in Myanmar or far out of their price range.

During the first quarter of this year, BCMF's caseload increased to 77 patients _ compared to 41 during the same time last year _ and Kanchana Thornton, the BCMF's programme director, says she expects the caseload to increase to about 250 by the end of the year.

"Our patients say, 'If things are better in Myanmar now, why would we be here?"' Ms Thornton tells Spectrum. "One day, healthcare reform in Myanmar will happen. But it will take a long time in a country that's been closed for so long."

Findings from the BCMF's July-September 2013 quarterly report demonstrate a fine line between corruption and a fundamentally under-resourced system, where government hospitals charge for free health care. "While it is true that health care is nominally free in Myanmar's government hospitals, a closer look reveals that in an under-resourced system plagued by corruption, underpaid medical staff and limited expertise, it is rare that any medical treatment truly is free of charge to patients and their families," the report reads.

As Ms Thornton and Ms Carter point out, out-of-pocket charges aren't necessarily extortion to make the wallets of medical staff fatter. In most cases, government hospitals are so under-resourced there is simply no other choice _ and nothing in Myanmar's healthcare system comes for free, findings from the report confirm.

Take something as simple as a scan: The BCMF found that there are only two CT scan machines between Mon and Kayin states. Neither belongs to a government hospital.

"A private hospital will have the machine, but can the average person actually afford it?" Ms Thornton asks.

Bit, a 10-year-old boy with Down's syndrome, had his life put at risk when doctors at Mandalay General Hospital used expired medicine during surgery to remove a gastrointenstinal obstruction. 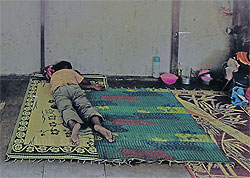 the patient house on the grounds of the Mae Tao clinic, where patients from both BCMF and Mae Tao are temporarily housed during treatment

"The doctor told me to get the medicine Bit needed for the surgery. But we couldn't find it. We tried and we went all around Mandalay city," says Bit's father, who is with him at Mae Sot while BCMF treats the boy for cardiac disease. His father recalls that one day at a restaurant, a pharmacist overheard him talking about the medicine _ but the vial in stock was nearly two months past its expiry date.

Bit's surgery echoes the BCMF's findings that in Myanmar, hospitals ask their inpatients to buy everything required for surgery _ from anaesthetics to simple cotton gauze. And in a country with woeful medical resources, even this can prove unpredictable for patients needing surgery.

"There's a perception in the West that everything's better in Myanmar now, with the recent political reforms and everyone moving forward _ they think all the problems there are being addressed," Ms Carter says.

Bit and his family now live in Myawaddy on the border as his parents look to alleviate their boy's constant suffering from persistent cardiac problems _ common in children born with Down's syndrome.

Like Bit, Than Zin and Khin Wai _ just small children _ have both come to the BCMF with congenital heart disease.

Than Zin's parents simply couldn't afford the price of surgery in Myanmar; Khin Wai was misdiagnosed with a common cold until her parents moved to Myawaddy and sought further treatment.

Myanmar's healthcare system is not only opaque, but grossly under-regulated, findings from the BCMF show. There are no standardised billing or payment policies and payment is left, unpredictably, to the discretion of medical staff.

And while government hospitals claim to be free of charge, the institutions ask patients to not only supply "donations", or tea money, to hospital staff, but for nearly every service available, the BCMF finds. These services can include anything from cleaning fees to the use of medical equipment.

Ms Carter says it's almost impossible to answer the question of what health care costs in Myanmar. "There's no regulated pricing structure in Myanmar. You'd have to do a side-by-side comparison of the various types of services in Myanmar and [for example] Thailand.

"We got quotes for our report on how much a CT scan should cost in Myanmar and then, well, we're promptly told by a patient that depending on where the clinic is and how the clinic manager feels that day they might get charged twice as much."

The system remains out of reach of Myanmar's poor. The Asian Development Bank estimates that 26% of Myanmar's population is living below the poverty line _ about 16 million people.

"Consider the cost of medical care relative to the patient's income. Whether surgery costs US$5,000 [161,000 baht] or $10,000, it doesn't matter to them, it's still completely out of reach for patients living at the poverty level," Ms Carter says.

"The cost of surgery is impossible for them, they're never going to earn that in a lifetime."

When Aung was attacked with acid while riding on the back of motorbike last year, he was unconscious for three days. He stayed at Hpa-an General Hospital for three more days on intravenous fluids.

"I was discharged and I was told I couldn't go for further treatment," he says. His wife said the bill came to $514 and that "we also had to buy all the medicines, the needles, bandages, cotton _ everything that was used at the hospital".

Aung's scar tissue from the burns developed into contractures _ areas that undergo excessive scarring after healing from deep burn injuries _ and built up around his joints, nearly immobilising him. He went for four follow-ups at the hospital and the doctors recommended inpatient care, but he simply couldn't afford to be re-admitted. Patients at the hospital had already donated to his medical bills, and his family exhausted their finances.

Aung is one of the country's 16 million who simply don't have the money for the cost-prohibitive healthcare system in Myanmar. After raising a meagre $200 from his community, he and his wife used the money on travel expenses to Mae Sot, seeking the help of Mae Tao clinic.

Because Mae Tao clinic is a small community health facility that has limited equipment, expertise and finances to treat complex medical cases, the BCMF admitted him under one of its two auxiliary adult programmes.

Meanwhile, Naw Mu Htoo, the incontinent girl, complains of leg pain. She hasn't moved from the bed enough. Her catheter hurts too, she says; it presses too hard into her side.

Like Aung, Naw Mu Htoo had to pay for everything when she was first admitted to hospital for an obstetric fistula, a hole between her vagina and bladder. It developed after she delivered a stillborn child in her rural Karen village. The doctor there allowed a vaginal delivery despite the baby's breech position, and an emergency C-section was too late.

"At the hospital in Hlaingbwe, the doctors were good carers. But we had to buy all of the medicines ourselves, the doctors just prescribe it," her husband says calmly, smiling and disassociated.

The doctors at Hlaingbwe then referred Naw Mu Htoo to Hpa-an General Hospital after finding her fistula, which they were not equipped to treat. After surgery and nearly two and a half months of inpatient treatment, costing her a total of $2,775, the doctors concluded she would not improve.

They referred her to Yangon General Hospital, but her family knew treatment there would be too expensive. Her husband took her to the doctor in Mae La camp, where he was looking for work, and she was referred to the BCMF.

Naw Mu Htoo recalls, "We took the back route from Hpa-an, which is worse. It's rocky. The journey was painful."

Treatment in Yangon, even with its hefty price tag, does not spell salvation for suffering rural patients. The BCMF came across one cancer patient who was referred from the city's premier Asia Royal hospital. He was told by the doctor there that the radiation equipment therapy at Asia Royal was too old for effective treatment, and to instead seek medical help at Mae Tao clinic. Another patient now at the BCMF made the journey to Yangon for heart surgery _ but when he got to Yangon General Hospital, he was told its cardiac surgeon was out of the country at the time.

"They go to Yangon General Hospital _ all for the cardiologist to say, 'Go to Mae Sot, you have a better chance of getting treatment for your child there,"' Ms Thornton says.

"I've seen more new cases and more complex cases, more desperate patients coming over. I try to get their reactions after they've been to the flash Yangon and Asia Royal hospitals.

"Then coming here, walking through the gate of Mae Tao clinic to our basic facilities _ what do they think?"

Ms Thornton adds that during the BCMF trip to Myanmar, she was told Nay Pyi Taw was considering a plan to provide children under five with free health care _ but hasn't heard anything more since.

And now, in spite of an incredible influx of donor money to an opening Myanmar, NGOs and non-profits still focus on primary health care _ which mostly includes malaria and tuberculosis immunisations.

Ms Thornton says that there have been stories in the media of health training for advanced medical problems, secondary and tertiary care. She also says that medical missions _ one-time entries into the country with a focus on primary health care _ are still going strong.

"It seems everyone is into primary health care in Myanmar," Ms Thornton says. "But a kid born with glaucoma needs more than one treatment _ a mission can't fix that with one surgery. So what will happen after that?" 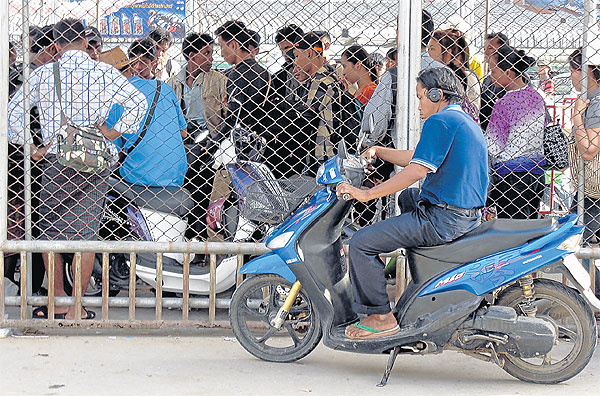 HEALTH CHECKPOINT: patients seeking help are among those crossing the border into Mae Sot on a daily basis.