Yes, we have no submarines
Thailand
Special Report

Yes, we have no submarines

How real is the risk posed to Thailand's trade by the South China Sea dispute, and what is the rationale behind opening a base with no subs?

As tensions rose last week between China and Japan over control of the South China Sea, the prospects of its impact on Thai waters and the preparedness of the country's navy to deal with it has been brought into question. 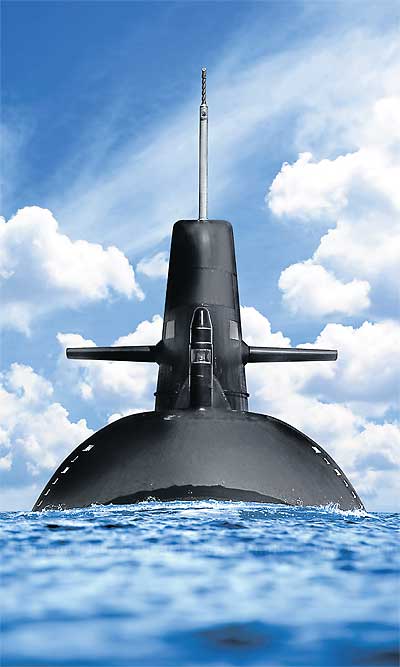 At the centre of the debate is the navy's first submarine base at Sattahip, which is due to open next month but with no submarines to home.

In his argument to shore up the need for the base, the submarine squadron chief has claimed that if territorial disputes in the South China Sea escalate, sea transport in the Gulf of Thailand could be shut down, with severe economic ramifications. But analysts see the correlation between Thailand and the disputed sea territory as a shaky argument at best.

"With the South China Sea, I don't think it's relevant," said Timothy Huxley, executive director of the International Institute for Strategic Studies (IISS) in Singapore. "Thailand is not a claimant to the South China Sea. Of course it has an indirect stake in terms of trade and keeping open sea lanes. But I'm not sure exactly how submarines would help in that context given that Thailand isn't a party."

Now a senior research fellow for the Maritime Security Programme at the S Rajaratnam School of International Studies, also in Singapore, Cdre Bateman said any association with operations in the South China Sea would be loose.

The purpose of the submarines was closely related to reconnaissance for "potential bilateral tensions in the region". These disputes occasionally occur between Thailand and Malaysia and Thailand and Cambodia, he explained - none of which are party to the territorial dispute in the South China Sea.

However, despite the arguments for and against the need for Thailand to have submarine defences, the military recognises it must modernise to remain a regional player.

The government pledged to recognise its military capability with a new 10-year procurement plan for defence beginning this year - but while the air force is already an established regional force, the navy lags behind in its effort to modernise outdated materiel. 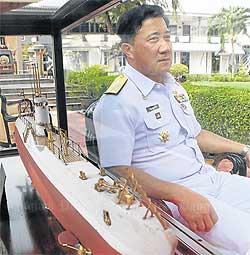 The move to acquire the navy's first submarine came as a surprise to many - the squadron base in Chon Buri province is yet to be completed. And while the country's neighbours already boast fleets of French Scorpenes and Soviet Kilos, the Royal Thai Navy is hoping to get a second-hand submarine by 2024 for a base slated for completion some time next month.

"Thailand has had plans to acquire submarines for a long time. There might be some economic benefits out of constructing the base," Cdre Bateman said.

Thailand originally had the capability to acquire submarines in the 1940s and '50s, but the plans lapsed. The country is starting from scratch in its effort to mobilise a submerged force, and the navy has come under fire for being too late to the game.

The Royal Thai Navy plans to complete the construction of the submarine squadron headquarters and training centre next month, despite not having any submarines in its fleet. Construction at Chon Buri's Sattahip Naval Base began in October.

Submarine squadron chief Panu Punyavirocha said the new headquarters would cost 540 million baht. About 200 million baht of that is being spent on the Submarine Command Team Trainer, which will include a crew training stimulator. Officers are already receiving submarine training in Germany and some have returned from a course in South Korea.

Mr Huxley said that the options for submarine procurement included Germany, Sweden and South Korea. He added that Thailand had not yet taken a decision on the precise procurement.

The Royal Thai Air Force has at the same time announced a plan to acquire new materiel. Royal Thai Armed Forces Supreme Commander Gen Tanasak Patimapragorn has drawn up a wishlist for materiel that includes one diesel-electric submarine for the navy and six Saab JAS 39C/D Gripen combat aircraft for the air force, an analyst at IHS-Jane's confirmed.

While the navy announced that they hope to acquire at least three submarines within the 10-year procurement plan, the Jane's analyst said that there is a possibility the acquisition may not be budgeted for - and the submarine base might lay barren with no submarines.

The analyst added that one multipurpose frigate has been budgeted for  under a contract with South Korea's Daewoo Shipbuilding & Marine Engineering  and the navy may consider one more.

S Rajaratnam's Cdre Bateman said Thailand was most likely to procure a second-hand submarine from Germany.

"Three is a minimum-size fleet," he said. "I'm a bit surprised - Germans might be offering attractive second-hand submarines and that might be a good starting point, but China has always been lurking in the background as a supplier of the Thai navy."

Cdre Bateman said that the general strategic consideration was that Thailand saw itself as a major power in Southeast Asia. With its neighbours acquiring submarines, it was predictable - despite the lack of a fleet - for the country to think about naval development and recognising its geographical limitations.

"Militaries hope for the best and prepare for the worst. I can only say that Thailand is johnny-come-lately when it comes to submarines. Malaysia has French Scorpenes and Singapore has Swedish subs; Indonesia and Vietnam are buying Soviet Kilos," said William Choong, senior fellow for Asia-Pacific security at IISS-Singapore.

IISS-Singapore's Mr Huxley added: "It [submarines] is clearly a current priority for Thailand. Over the last few years they looked at options for future development they did consider the option of continuing with an aircraft or helicopter carrier - but ultimately they decided that submarines were the most important capability that the navy needed to develop."

Rear Adm Panu also said that the acquisition of submarines would act as a deterrent to hostile parties seeking to encroach into Thailand's maritime territory. "This is a matter of sovereignty and territorial integrity," the squadron chief said.

But for Cdre Bateman "the word 'encroachment' is good political rhetoric".

"When Thailand ratified its sea convention [three] years ago, they made a statement about other countries not being able to conduct activity in the special economic zone without permission," he said. "This suggests a sensitivity to encroachment."

Meanwhile, Mr Choong said that the navy's talk of encroachment was politically outdated.

"No one talks about legitimate threats in polite political discourse nowadays," he said. "One thing that naval officers don't talk about is strategic dialogue and political accommodation.

"That's why countries like Malaysia and Singapore have engaged China actively, both bilaterally and through multilateral dialogue.

"The operative principle is to pursue dialogue but keep the gunpowder dry."

Mr Huxley added that Thailand didn't have any specific enemies or potential adversaries - the country has managed to maintain a flexible foreign policy avoiding major conflict for decades, and that the submarines are necessary for posturing.

"It [the submarine base] is ensuring they have an adequate military capability that includes a naval dimension," he said. "I don't think this is aimed at potential adversaries, it's more a question of keeping up at what is seen as an important dimension of naval power."

BLOWN OUT OF THE WATER

A representative for a major American think-tank specialising in US foreign policy and international affairs has slammed the procurement plan for navy materiel.

Josh Kurlantzick, senior fellow for Southeast Asia at the US-based Council on Foreign Relations, said that while it was "probably not legitimate" for the navy to build a submarine base with no submarines, it had "never stopped the Thai military before".

Mr Kurlantzick added that the navy's justification to build up a presence should territorial disputes in the South China Sea escalate was also illegitimate.

"What was the last war the Thai military fought? Who are their external threats? What is their gravest security problem? An insurgency in southern Thailand. How would any of these things help address the insurgency? They wouldn't," Mr Kurlantzick said.

"But what do we know about the Thai military? It's essentially an armed bureaucracy, and new purchases are a way for the Yingluck government to keep the peace with the armed forces."

Whether the navy's plan is valid, Thailand has been successful at maintaining its position as a significant military player in Southeast Asia. The Royal Thai Air Force is well respected, with regular training conducted with the Republic of Singapore Air Force, which is not a formal ally, and the US, which is. The annual Thai-US Cobra Gold military exercise will start on Tuesday, with the involvement of Chinese soldiers for the first time.

While Gen Tanasak's wishlist for navy materiel may seem feeble, the concomitant acquisition of new aircraft "is par for the course", said Mr Choong. The air force has recently brought into service Gripen air defence and multi-roll hydro aircraft, and according to Mr Huxley, are looking to expand. "Thailand has got an ongoing, continuous process of military modernisation. In the air force's case, they are modernising the fleet and will eventually replace the older Thai F-5 fighters with F-16s," Mr Huxley said.

"The plan is to build up the fleet of Gripen fighters, which Thailand started procuring from Sweden."

An initial evaluation of the hydrography of the waters off the coast of Chon Buri show that they are not conducive to submarine operations. Simply put, the waters are too shallow for the submarines at Sattahip to remain hidden from sight.

But this is not a deal-breaker for the navy - in fact, gulf waters may prove a boon to submarine operations.

"The hydrography is not quite as bad as it might seem. Further down to the Gulf of Thailand, operating conditions do get better. The gulf is not very clear and it's very muddy - that of course helps submarines operate even if it's in shallow water," Cdre Bateman explained.

However, even as the military undergoes a process of modernisation and looks to upgrade its materiel, the navy must cope with developing technologies from military superpowers - namely the US and China.

For submarines, being able to hide from plain sight is quickly becoming an outdated tactic for surveillence and intelligence operations. "The trends in submarine warfare are trending in some way against submarines and that's particularly the case in shallow waters," Cdre Bateman said.

"There's all sorts of fancy technology for detecting submarines now.

"Computer technology is allowing countries to see what's happening under the water. A major sophisticated advanced power would have the ability to detect a Thai submarine coming out of Sattahip using these types of technology."

According to Cdre Bateman, this technology will be readily available in 10 to 20 years - which could easily eclipse the military's 10-year procurement plan. "Thailand is looking at the short-term benefits of submarines," he said. 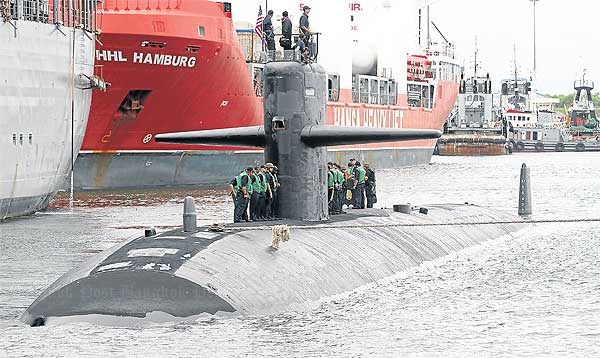 ALL AT SEA: The USS Buffalo (SSN-715) submarine is moored at Laem Chabang port in Chon Buri province. The submarine is participating in an anti-submarine exercise with Thai warships. photo: Pattanapong Hirunard