US ‘enthusiastically participated’ in genocide

In the late ’50s and early ’60s, the US advised and funded the army’s deployment ‘like an octopus with tentacles reaching into each village’, according to a documentary

Encouraged by the international success of his documentary film, The Act of Killing, Joshua Oppenheimer is now pushing Washington to publicly expose how “the US enthusiastically participated in the genocide” in Indonesia during the 1960s. 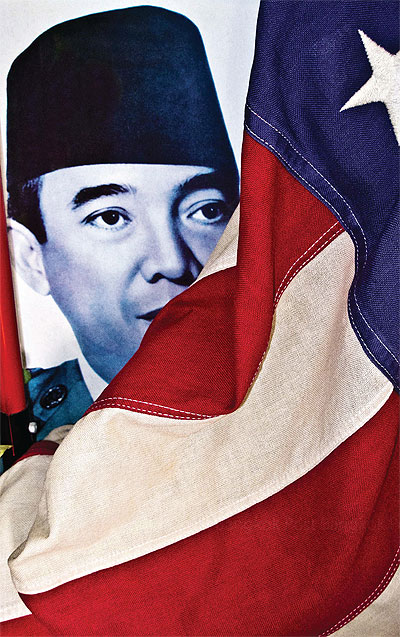 cloak of history : Indonesia’s first president Sukharno lost power in 1966 when US-backed Suharto and the military orchestrated massacres of opponents.

“We are currently working with [US] Senator Tom Udall’s office, and the East Timor and Indonesia Action Network, and Amnesty International in the US,” Oppenheimer said in an interview after appearing in Bangkok where he showed his film at the Foreign Correspondents’ Club of Thailand last month.

“Senator Udall is drafting a ‘Sense of the Senate’ resolution to argue that the US must be totally transparent about its role in the genocide,” he said.

New Mexico Senator Udall is on the Senate Foreign Relations Committee and showed the film to Washington audiences.

They agreed to re-enact how and why they tortured and murdered people nearly 50 years ago while helping Indonesia’s military kill as many suspected communists as possible.

Oppenheimer now wants Washington to open its secret files because “in the late ’50s and early ’60s, the US advised and funded the Indonesian army’s deployment like an octopus with tentacles reaching into each village".

“This was done so that the army would be effective in exterminating the communists when the opportunity arose,” he said. 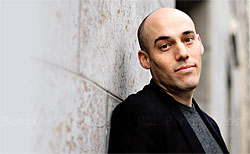 OUT OF THE SHADOWS: Joshua Oppenheimer says that the attention the film has received is forcing Indonesia to address a dark episode in its history.

But the lists of doomed individuals — described as Indonesian Communist Party members or suspected sympathisers — were less damning than the US State Department official’s symbolic act of naming names.

“Martens seemed to feel like he had provided crucial intelligence,” Oppenheimer, 39, said.

“Because, in fact, all the names he provided were public figures at the national or regional level, they would have been available to the army, which was deployed already in every village.

“The kill list was less crucial intelligence than an unmistakable signal from the US that the army should kill all potential opponents of the new regime,” the film-maker said.

“I, and I alone, decided to pass those ‘lists’ to the non-communist forces,” Mr Martens wrote in a letter to The Washington Post (published on June 2, 1990), attempting to limit public blame after his retirement in Maryland.

“They were killed because they were potential enemies of the emerging Suharto dictatorship. The US, by providing the lists, made it very clear that we wanted these people killed.

“Were they communists? Some of them, but many would have been journalists, intellectuals, artists, trade unionists, leaders of the ethnic Chinese community, land reform advocates, loyalists to President Sukarno,” who was ousted when Suharto gained power.

“They were mostly public figures, which is why Martens was no James Bond in compiling these lists. Just a diligent reader of the national and regional newspapers,” he said.

“The US wanted the army to go after any potential enemy of the regime.”

Oppenheimer expects Washington’s secret documents to shed some light on how “the US enthusiastically participated in the genocide”.

Overall during 1965-66, Indonesia’s army and its civilian death squads killed, with permanent impunity, more than 500,000 people.

“I think we would up that estimate to perhaps close to 500,000 people,” Marshall Green, the US ambassador in Jakarta during those years, told a secret Senate foreign relations committee session.

“Of course, nobody knows. We merely judge it by whole villages that have been depopulated,” Mr Green told the committee, according to Tim Weiner’s book, Legacy of Ashes: The History of the CIA. 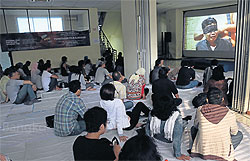 HIDDEN HISTORY: People in Jakarta watch the Oscar-nominated ‘The Act of Killing’, which includes scenes of mass killers re-enacting their crimes on screen.

The CIA had failed in its 1957 coup attempt against Sukarno, who was perceived by Washington as soft on communism.

But in 1965, a new, bloodier strategy enabled US-backed Suharto to gain power from Sukarno in 1966, orchestrate more massacres and rule as a dictator until he was finally toppled in 1998 after an economic crisis and student-led rebellion.

In 2004, when Oppenheimer interviewed Mr Martens, the film-maker also interviewed Joseph Lazarsky who was the CIA’s deputy chief of station in Jakarta in 1965.

“Notes from my phone call with Lazarsky on 15 April, 2004, shows he confirmed ticking the names off the list of those who were confirmed by TNI — the Indonesian army — as killed,” he said.

“The [Indonesian] army returned the lists with the names of the dead checked off,” Oppenheimer said.

The Act of Killing, horrific to watch, was gruesome to film.

Civilian Indonesian death squads “were boastful and open, and would tell the most horrible details of the killings”, Oppenheimer told an audience at the screening of his film in Bangkok.

“When I started hearing the perpetrators speak this way, I felt that the big story, certainly the overwhelming story, was the one right now in front of me — impunity today.

"It was this feeling of wandering into Germany 40 years after the Holocaust, only to find the Nazis still in power.”

He coaxed some of the executioners to appear in The Act of Killing by saying: “Show me what you’ve done in whatever way you wish, and I will film your re-enactments.

“But I will also film you and your fellow death squad veterans discussing what you want to show and, as importantly, what you want to leave out, and in that way, document how you want to be seen, and maybe how you really see yourself.”

The film-maker knew, “If I could show that, the whole moral lie that the genocide was heroic, the whole facade that it was heroic, should come crashing down.”

Bizarrely, the documentary became a film within a film, with self-confessed killers performing as actors portraying not only themselves murdering victims, but sometimes also playing their own victims.

“The release of my new film, The Look of Silence, is the second film in a diptych with The Act of Killing,” Oppenheimer said. It shows a family that survived the genocide confront the killers.

“The Look of Silence will hopefully premiere in 2014, and come out in cinemas around the world, over the following 12 months.”

Oppenheimer has dual US and British citizenship, and grew up in Washington DC and Santa Fe, New Mexico. He was based in London from 1997-2011, and now lives in Copenhagen, Denmark. n

Richard S Ehrlich is a Bangkok-based journalist from San Francisco, California, reporting news from Asia since 1978. 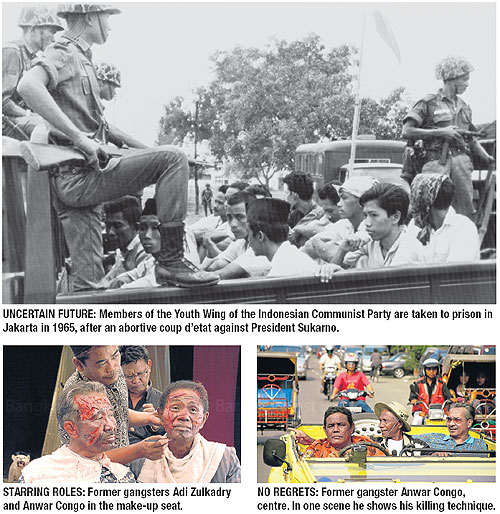