Doctor sick of all the 'trash'
Thailand
Special Report

Doctor sick of all the 'trash'

The Rubbish Collection Organisation’s war on lese majeste has failed to yield results, but the group’s founder is fighting on

The founder of a group of vigilante lese majeste hunters stirred controversy earlier this year when he suggested offenders were "trash" worthy of being discarded. Now, more than two months after the military toppled the Pheu Thai-led government, Rienthong Nanna and his Rubbish Collection Organisation (RCO) are struggling to maintain relevancy. 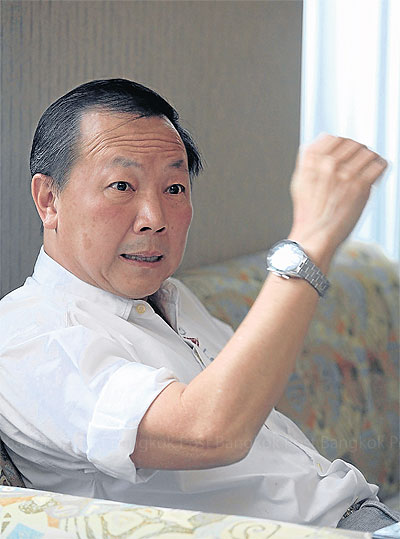 The self-styled "Van Helsing", a former operations director of the Army Medical Department and current director of Mongkutwattana Hospital, which his family owns, formed the RCO in April in response to what he said were personal frustrations over a surge in anti-monarchy sentiment.

"Committing lese majeste is a crime," he said. Noting that His Majesty the King has never done anything to halt criticism of the monarchy, Dr Rienthong said he took it on himself to defend the crown. “Since there is no one out there to protect him, I will be the one who volunteers to do that.”

While the launch of the RCO drew wide media attention, and fuelled debate between monarchists and critics who feared the human rights implications of the group's methods, since then it has drifted into relative obscurity as its work failed to secure a single lese majeste conviction.

Despite boasting more than 200,000 followers and what Dr Rienthong claims is a "top secret" surveillance command centre, in nearly four months of operation the RCO has managed to identify only 11 suspects — all of whom reside outside the country, making prosecution almost impossible.

“I see myself as the person who sweeps the dusty floor," Dr Rienthong said when Spectrum visited him last week. "When I first sweep it, the dust will be blown all over the place. But once I get the dust in the same pile, the floor will look cleaner.

“I have been following lese majeste action through all kinds of media for quite a while, and it seems like it has gotten worse this year.”

He said he was encountering many people who openly declared themselves as enemies of the King, and he reached the point where he could not stand it any longer. His biggest fear is that this group of people will try to overthrow the monarchy and change Thailand's political structure.

Dr Rienthong, who refers to himself as Van Helsing — after Bram Stoker's fictional doctor-cum-vampire slayer — on RCO's Facebook page, said he felt compelled to establish a group to monitor all lese majeste activities.

"Criticising the King or his family members is not right. It’s a crime. It has nothing to do with human rights issues at all. No one is allowed to do that," Dr Rienthong said.

The RCO, which Dr Rienthong founded on April 15, is aimed at documenting all forms of less majeste published and broadcast through various forms of media. The group names and shames the suspects it identifies, and hands over evidence to police. 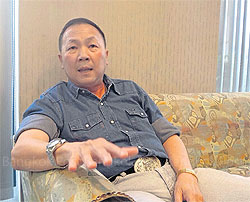 Dr Rienthong stressed that he had no intention of comparing human beings to rubbish, but the term khaya, or trash, for him is meant to label lese majeste offenders as ungrateful and treacherous. He insisted the word was used in the name of his organisation not to look down on people, but to send a strong message that lese majeste offences should not be tolerated by society.

Many critics have criticised the RCO’s practice of publicly naming lese majeste suspects and labelled the group “witch hunters”, but Dr Rienthong insists the term is not accurate. He said the RCO “doesn’t hunt down people who commit lese majeste, but aims to raise the awareness among people not to insult the royal family”.

The covert nature of the organisation, however, appears to lend itself more towards tracking suspects than raising public awareness. When Spectrum visited Dr Rienthong last week, he pointed out a door which he said led to a surveillance command centre manned by IT experts. He refused to allow a tour of the room, agreeing only to pose for a photograph outside the door.

The RCO is essentially set up as a network of volunteers who monitor media outlets for activities that might be considered as undermining the monarchy. It then keeps records of the alleged lese majeste offences and files reports to police and government officials.

The organisation also campaigns to promote what it believes is the correct understanding of the royal institution.

Dr Rienthong insisted his organisation has no political affiliations. He said he has his own political views, but that has nothing to do with what the RCO is doing.

“Thailand needs the royal institution to be able to survive. Otherwise people would kill each other for power. The monarchy is the centre of hope, and we need that in order to move on.”

Tight media restrictions imposed by the military in the wake of the coup have reduced the number of targets available to the RCO. The organisation initially focused on monitoring both online media and community radio programmes. Since the military seized control of the country in May, however, radio stations have been mostly barred from the airwaves, forcing the RCO to turn its attention almost exclusively to online posts.

Dr Rienthong told Spectrum that he has no exact number of people who are helping him trace lese majeste posts on Facebook, since he has received help from “many thousands of people”.

But he noted that he has close to 200,000 followers on the RCO’s Facebook page, many of whom were taking part in tracking lese majeste posts.

The organisation has no proper office for its members to do their work. “All you need to have is a device that can view Facebook. If you can find anyone who posts lese majeste messages, you can just capture the screen that shows the username of that person and the message they posted. Then submit it to us, and we will take care of the rest,” Dr Rienthong explained.

But the monitors have to be careful, because many online users create false identities or use pseudonyms to post provocative comments. Dr Rienthong recalled a recent case where a person had stolen another person’s Facebook identity to post lese majeste messages. Because the RCO also names suspects publicly, it must be careful about ensuring it has the right person.

He explained that besides the team that tracks down these lese majeste posts, he also has some IT experts and investigators to double-check cases before they are submitted to police.

So far, the organisation has successfully traced down what it believes are 11 cases of lese majeste and submitted them to police.

Arrest warrants have been issued, but prosecution is unlikely since all of the suspects live in other countries.

Spectrum spoke to Pol Col Niwate Arpawasin, superintendent of the Royal Thai Police Office’s High-Tech Crimes Unit, about the RCO’s work. He explained that his unit has never worked directly with the organisation.

The complaints for lese majeste are made at local police stations in the area where the incident occurred, he said. The High-Tech Crime Unit can only help investigate when the issue is transferred to the unit.

Besides tracking down lese majeste posts on Facebook, the RCO is also providing free training services in IT surveillance for its members.

Dr Rienthong said there have been three sets of people who have signed up for training during the last three months. The organisation has held training sessions once a month, with at least 80 people attending each time.

He refused to reveal the full details of how the RCO’s operation works. All he said was that the principle for investigating was to observe, be creative and to do a lot of research for each case. Sometimes it involved making friends with a suspect to find out more personal details about them.

He said untrained RCO members trawl the internet looking for evidence of lese majeste. If they find something, they pass over the information to those members with proper IT training to investigate.

Dr Rienthong revealed that there are now close to 400 posts under investigation.

Dr Rienthong said he has plans to collaborate with other units to make the RCO’s work in the future much smoother.

He is particularly seeking support from the Lawyers Council of Thailand and media clubs, which he believes are the most important groups to help with his work.

“The power of people will be diminished without collaboration from government and the private sector,” Dr Rienthong said. “I believe it will happen considering the number of followers and support I have received from the public.”

Dr Rienthong said that in the first six months to one year of operation, the RCO would focus on boosting public understanding of both the royal family and his organisation. He plans to use his network to go to all regions of Thailand and “make them understand how important it is to protect the royal institution”.

After that, Dr Rienthong will focus on changing the RCO’s legal status to a foundation. For now, the organisation receives funding primarily from Mongkutwattana Hospital, which his family owns. He has never accepted donations from the public, saying it is not his attention to raise money from anyone. But if the organisation is registered as a foundation, donations will be more transparent, he said.

While the RCO’s work has no clear definition of success, Dr Rienthong said that as long as people understand more about the importance of protecting the royal family, his group had done its job properly.

He compared what he is doing with drink-driving campaigns run by the police. He said once drivers are more aware of the law, they are more afraid to violate it. “I hope my organisation has the same effect, raising people’s awareness so they are afraid” to commit lese majeste, he said. 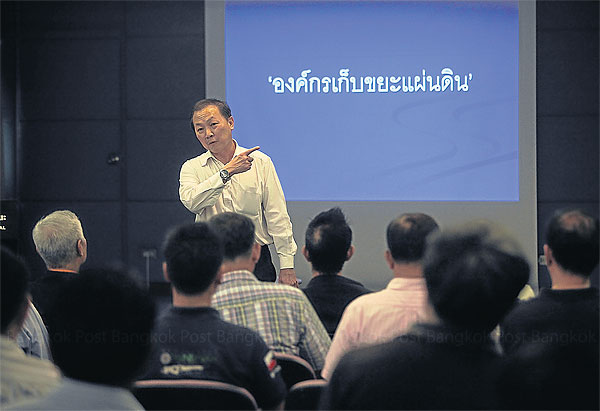 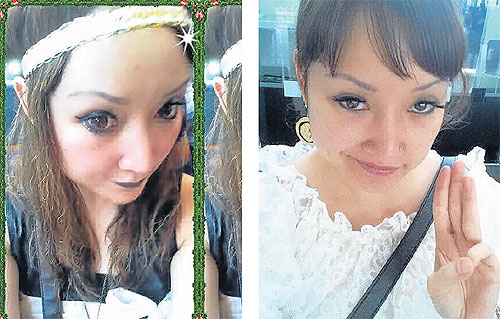 one who got away: Dr Rienthong filed a complaint with the Technology Crimes Suppression Division in April against British citizen Chatwadee Amornpat, aka London Rose, accusing her of lese majeste. Photos: Facebook 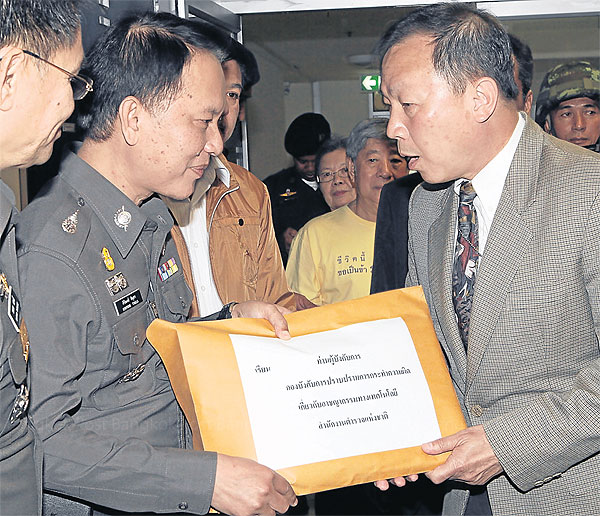