With demand tipped to exceed supply, now is the time to look at lease agreements By James Pitchon

Bangkok office rents rose by about 5% over the past 12 months despite the political turmoil and slow economy in the first half of this year. The vacancy rate is now less than 10%, the lowest level in more than 20 years; there is only about 400,000m² of new space under construction, according to CBRE Research. The total amount of occupied space continued to grow in the first half of this year despite the weak economic situation and we expect that tenants planning expansion will now proceed. 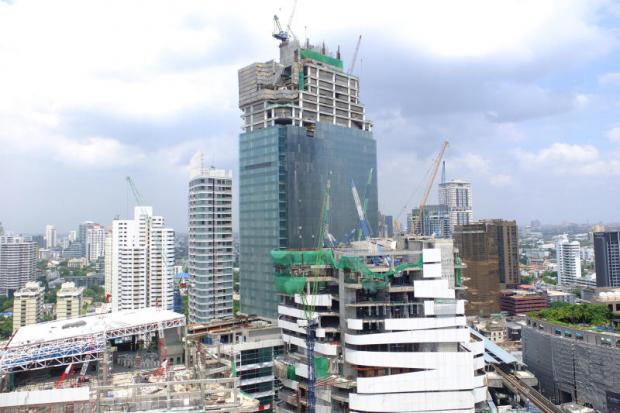 GOING UP: Bhiraj Tower at EmQuartier is one of only two Grade-A buildings due for completion in Bangkok this year, meaning a supply shortage is likely to force up rental prices.

One of the few new buildings, AIA Capital Center, a Grade-A Leed Gold development on Ratchadaphisek Road, has just been completed and its first tenant has already moved in. The other Grade-A building this year, Bhiraj Tower at EmQuartier, opposite Emporium shopping centre, is expected to be finished in the fourth quarter.

"We have seen strong tenant interest in both buildings," said Nithipat Tongpun, executive director of CBRE's office services team, who is the sole agent for both buildings. He also reported that the AIA Capital Center had already achieved commitments for 40% of the building while 25% of Bhiraj Tower at EmQuartier had already been pre-let prior to completion.

Only about 400,000m² of new office space is due to be completed over the next three years. The annual take-up rate is expected to exceed new supply, which means that tenants will have limited choices and rents will likely continue to rise. 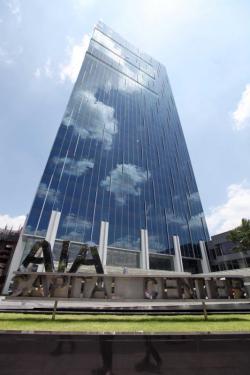 Bangkok rents are still low compared to the rest of the region; only Manila and Canberra have cheaper rents while those in Singapore, Shanghai, New Delhi, Beijing and Hong Kong are around three to six times more expensive than in Bangkok. Office rents in Jakarta are also double than those in Bangkok. In Yangon, while rents have fallen, the cost for a Grade-C building is the same as that of a Grade-A building in Singapore, Shanghai or Sydney.

Unlike many other cities, the spread in rents in Bangkok between a Grade-A development in the city centre and a Grade-B outside the centre is limited. On average, the spread is less than 300 baht per square metre per month.

The average capital cost of fitting out and decorating an office in Bangkok ranges between 15,000 and 20,000 baht per square metre. For tenants, this means that relocating to a lower-grade building in a less central location does not necessarily save money because the capital costs of a re-fit and the reinstatement of the old premises often outweigh any cost saving.

Low vacancy rates and limited new supply mean that tenants have to plan now. In the past 20 years, with vacancy rates of more than 10%, tenants did not need to think about their office requirements more than six months before their lease expires.

There is now very limited choice, especially in buildings next to mass transit stations. This means that tenants must start examining their options ahead of their current lease expiry date.

Fitting out a new office can take between six weeks to four months depending on size. In addition, finding and appointing designers, consultants and contractors and completing the design and specification of the new office for approval by the landlord before building can begin can take up to three months.

Furthermore, most landlords require that tenants reinstate their existing premises to the original handover condition before the lease expiry date, which can take up to one month. This timeline means that tenants need to have decided already which building they want four to eight months before they need to move in. Moreover, the search, negotiation and corporate approval process can also take from three to 12 months depending on the tenants' requirements and their internal corporate approval process.

CBRE advises that small tenants should start considering their options one year before their existing lease expires; for larger tenants, the scarcity of space means that they need to start looking at other buildings at least two years before lease expiry.

In order to benefit from a rising market, landlords need to make sure their buildings match tenants' requirements. This means that landlords must consider upgrading the common areas and building systems such as air-conditioning and lifts. n

James Pitchon is the executive director and head of CBRE Research and Consulting, Thailand. He can be reached by email at bangkok@cbre.co.th; Twitter: @CBREThailand; Facebook: www.facebook.com/CBRE.Thailand; website: www.cbre.co.th.