Ancient artefacts back where they belong
Thailand
Special Report

Ancient artefacts back where they belong

A group of the country's top archaeologists recently went about the painstaking task of examining more than 500 ancient antiquities returned to Thailand. Some of the pottery was placed on shelves, while small ornamental items were wrapped in transparent plastic with handwritten codes to identify the sources of the items. 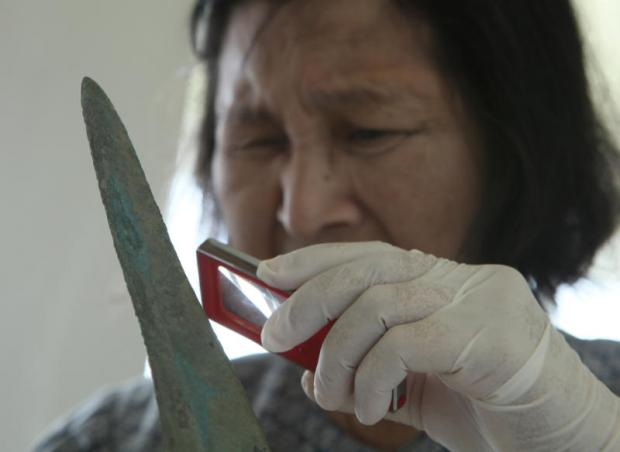 Expert: Amara Srisuchat, a senior expert in art and antiquities at the Department of Fine Arts.

Amara Srisuchat, a senior expert in art and antiquities at the Department of Fine Arts, became excited after studying one artefact through a microscope. "Do you see traces of rice shafts in this rusty axe? It shows the agricultural activity in those days," she said.

"This one is a reproduction," said Somchai Na Nakhonphanom, a senior adviser on archaeology and museology, while holding up a cotton bud tainted with brownish orange paint after he rubbed it on the surface of one of the earthen pots. He then rubbed the cotton bud on another. "See, this is genuine ancient pottery. The paint does not come off." 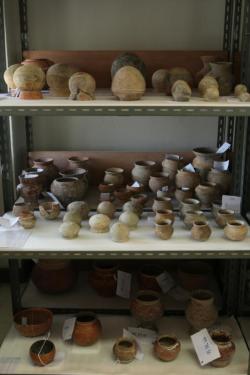 Recovered: Some of the antiquities from the Bowers Museum waiting for examination.

He said he believed the pottery may have been excavated from the Ban Chiang archaeological site in northeastern Thailand.

What the inspection team was doing represented a victory for Thai and US authorities , who have been trying to bring back historic items looted from the Kingdom, over US museums. It was the first time archaeologists from the Fine Arts Department had looked at a total of 554 antiquities which arrived in Thailand on Oct 3. Now kept at the National Museum Storage building in Pathum Thani for identification, the artefacts from the Ban Chiang site, whose civilisation dates back 5,000 years, were once part of the black market of stolen antiquities.

Earlier this year, the Bowers Museum in California agreed to ship eight containers of the antiquities to Thailand after US authorities ordered the museum to return them or face trial for illegally obtaining the items. US federal agents seized the items from Bowers Museum in 2008 after years of investigation into the connection between the looted antiquities from Southeast Asia and tax fraud in the US.

"The US authorities told us that this will be the exemplary case to suppress the black market of looted cultural property," said Patcharin Sukpramool, head of registration, museum storage and information at the Department of Fine Arts.

The handover of the biggest collection of looted antiquities to Thailand was a result of the US attorney-general's investigation into smuggled artefacts in more than 10 private institutions in California and Illinois.  Since the value of art donations can be used for tax deductions in the US, some donors inflated the value of their antiquities for tax deduction purposes, creating a demand for looted items. Bowers Museum and some other museums and institutions received the looted items from donors, who then claimed tax deductions.

Found: A bowl thought to be from Ban Chiang.

In 2008, the Office of the US Attorney-General raided Bowers Museum and seized hundreds of looted antiquities believed to come from Southeast Asia. The highlight was hundreds of artefacts from the Ban Chiang archeological site consisting of clay pottery, bronze utilities and ornaments.

According to a report by the Fine Arts Department, the handover was a result of the investigation by the attorney-general's office, which seized the smuggled antiquities from 13 institutions in California and Illinois.

After gathering adequate evidence, US authorities raided several museums and filed charges against people believed to be involved in the black market of stolen antiquities for tax purposes.

US authorities later asked the Thai consulate in Los Angeles to send Thai curators to identify the artefacts. A preliminary investigation from Sept 13-16, 2009, showed the artefacts belonged to Thailand.

Ms Patcharin, who was part of the Thai team on that trip, said: "Several hundred items were waiting for us for inspection in storage.

"We had to go through these items quickly — in three days — to find which items originated from Thailand."

There were also items believed to be smuggled from other countries in Southeast Asia. "Some are not difficult to identify. Some were wrapped in plastic bags with writing showing the year of receipt. Some arrived in the US as recently as 2004," she added.

According to a report in the Los Angeles Times on May 18, 2013, the raid was based on evidence gathered during years of undercover work. US Federal Agents raided four museums in Southern California, including Bowers, and seized more than 1,000 artefacts at the museums and at least six other locations in California and Illinois.

The Times quoted the search warrants as saying the objects had allegedly been illegally excavated from sites across Southeast Asia, smuggled into Los Angeles and donated to the Bowers Museum in Santa Ana, the Pacific Asia Museum in Pasadena, the Mingei Museum in San Diego and the Los Angeles County Museum of Art. 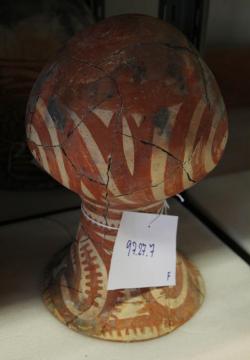 Some members of the smuggling network have been indicted. US federal agents exposed the network by going undercover, posing as donors. According to the Art Newspaper in June, at least three suspects died during the course of the lengthy investigation.

US prosecutors later agreed not to charge anyone at Bowers in exchange for returning the items to Thailand, the Art Newspaper quoted the museum's lawyer as saying.

Bowers agreed to ship the items to Thailand on Oct 2. The news was welcomed by Thai communities in the US, who praised the Office of the Attorney-General for "reclaiming the national treasure" on their website.

Anek Sihamat, a former director-general of Fine Arts Department who was involved in the handover but retired at the end of September, said: "If these items are proved to be authentic, they will to be valuable for the study of our prehistoric age."

Mr Anek said it is believed many of the artefacts were smuggled out of Thailand in the 1960s when the law against the illegal export of natural treasures was not strictly enforced. Some items were, however, looted in recent years.

"People in the Ban Chiang community are excited by the news," said Sirin Yuangyaidee, curator of the Ban Chiang National Museum in Udon Thani province.

"These items are from a World Heritage Site and that's why they should be returned to where they belong." 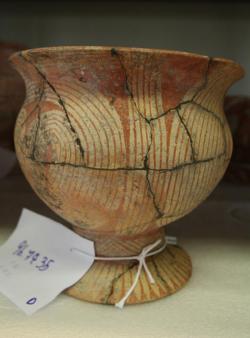 Restored: A ceramic bowl with the signature Ban Chiang pattern and style.

The Ban Chiang Archaeological Site, a World Heritage Site, dates back to as early as 1,500BC. Pottery painted in brownish orange in circular, stylised patterns is the most recognisable feature of the sophisticated civilisation of the earliest farmers in Southeast Asia.

Ms Amara of the Department of Fine Arts noted that from an archaeological perspective, the discoveries in Ban Chiang reveal the depths of civilisation in the region. "Painted clay pottery was synonymous with Ban Chiang because they were among the first items that were recovered from the early days of excavation. But later, after we excavated into deeper stratigraphic layers, we found bronze tools of the older civilisation that dated back some 5,000 years," she said.

The site, in Ban Chiang sub-district in Udon Thani, was first excavated in the mid-1960s. Later excavations were carried out in neighbouring provinces such as Sakon Nakhon, Nakhon Phanom, Nong Khai and Buri Ram, showing the extent of settlements. The artefacts were evidence of the existence of agricultural-dependent villages where people employed complex technology such as manufacturing ceramics and bronze tools.

The returned antiquities have been categorised into three groups. The first are prehistoric items believed to come from the archaeological site in Ban Chiang and the Northeast, consisting of utensils, tools and ornaments made of earthenware, bronze, stone, glass and animal bones.

The second group consists of earthenware, stones, shells and glass from the archaeological sites in the central provinces of Lop Buri and Nakhon Sawan. The third group consists of a small number of historical items from Sukhothai and Lanna sites and includes tobacco pipes and Buddha statues.

This diverse collection of artefacts has huge historical value. Corroded metal armbands with dirt and human bone inside were recovered from an ancient tomb. People used to intern a body with utensils for use in their next life. 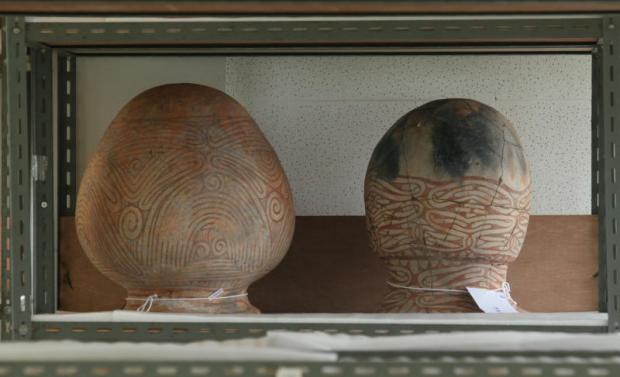 Some of prehistoric ceramic artifacts believed to be recovered from Ban Chiang Archelogical Site have been shipped to Thailand in October 2014.

When these items were found by US authorities, they were not on display at museums there because the curators thought they were of little interest to the audience.

The return of these items was, however, exciting news to Thai archaeologists. Ms Amara pointed to a corroded iron axe with traces of ancient fabrics on it.

"We have to find out what the fabric is made from," she said. Evidence of hemp and cotton fabrics has been found at the Ban Chiang site. "But we have not found any fabric made from silk so far. If we can find any, that will be quite a discovery because it will connect the civilisation in Ban Chiang to the Silk Road," she added.

"We did not have many prehistoric glass beads in our collection," she said.

The glass beads were believed to be worn by men in power to show their status. She also showed a couple of clay stamps used for stylising fabric patterns, which are among the hardest artefacts to find. 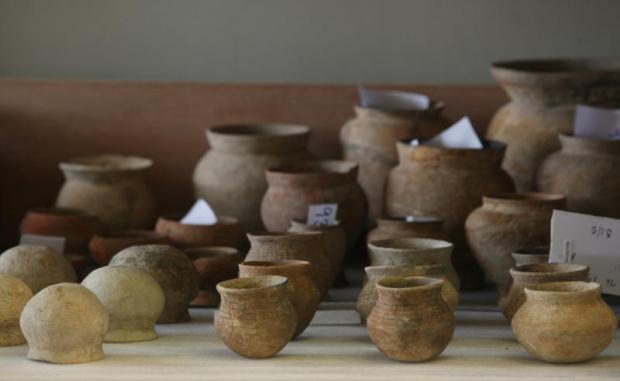 In limbo: Some of the Ban Chiang antiquities which Thai curators and experts are waiting to examine to determine which are real and which are fakes.

When it comes to items that have been looted, often the thieves had not recorded the source or where they were stolen from, making the researchers' jobs more difficult. "The knowledge about where they are from is an essential element for archaeological study," Ms Amara said. "Unpolished items freshly excavated from a site with rust and dirt can tell us more because they have the sources of the origins."

Yet every single item is of high historical value. "A small piece of broken tool, which some collectors may throw away, can reveal the interior of the material used in those days. Of course, we don't want to break a complete item just to find out what is inside," she added.

While the identification process of the recovered items has yet to be completed, Mr Somchai said he believed that at least 80% of the items are genuine. The reproduced items he has detected so far amount to only a small number of painted pottery pieces, while most of the bronze tools are likely to be genuine, he said.

But even the fake items are worth studying. "They can give us a good comparison to help us locate the genuine ones," Mr Somchai said.

Once the identification is completed, the Thai government, represented by the Foreign Ministry and the Fine Arts Department, and the US counterparts plan to organise a press conference to officially welcome these items home. n 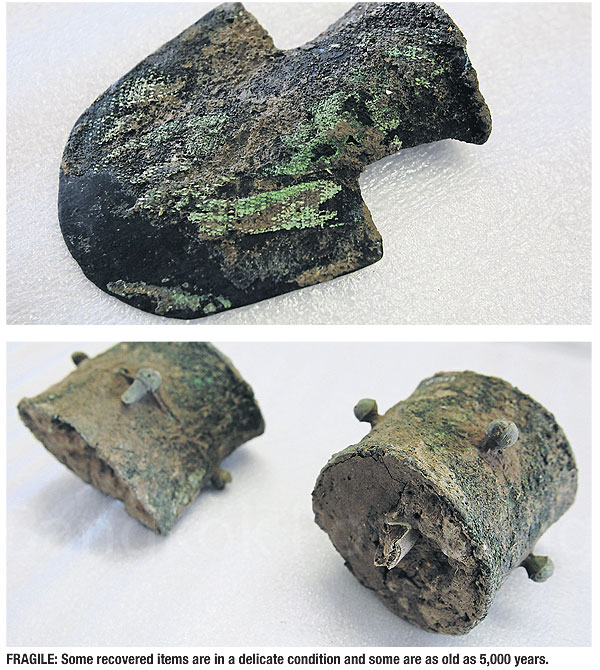