People's voices, including hers 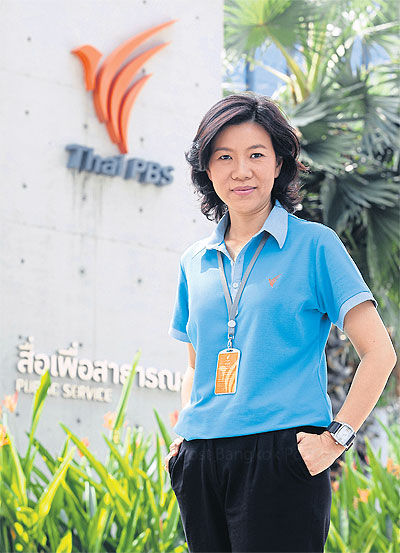 But in the past week Nattaya has found herself the subject of news headlines after she was removed from her role as host of a Thai PBS programme. The order to sideline her apparently came directly from high-ranking military officers, who were upset by her line of questioning.

In the past few weeks, audiences have not seen Nattaya in the host's seat of the People's Voices programme, although she has still appeared in footage from segments recorded in different provinces.

"I am still an editor of the programme. I just work behind the scenes now," Nattaya told the Bangkok Post Sunday.

She said there was pressure to remove her as host of the programme. "But I can still do my job as a media person under limitations, just like everyone else," she said.

The 43-year-old has earned a reputation as a no-nonsense, straight-shooting TV journalist, specialising in reporting on the plight of marginalised people upcountry.

The source of the controversy which saw her sidelined was an episode of People's Voices, jointly run by Thai PBS and 12 NGOs. The programme is designed to be a mobile public forum, travelling to different provinces to allow local people of various political persuasions to present their opinions on prime-time television.

"I am not surprised that our programme has faced this kind of reaction," Nattaya said. "Because we reflect the voices of the people. Now every group in society is targeted. If we reported this and nobody took notice, that would be strange."

In the past two months, Nattaya and her team have travelled around the country, organising a series of forums, including one in the southern province of Songkhla in the middle of October. 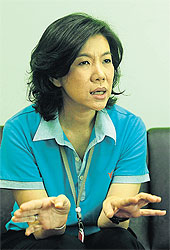 There, she upset some people by asking the participants: "Weren't [you] the southerners who blew whistles to ask the military to come out?"

The question was a reference to protests led by the People's Democratic Reform Committee — whose key support base lay in the South and Bangkok — which eventually led to the coup which overthrew the Yingluck government on May 22. It invited a backlash from critics on social media who were incensed that she had asked a "provocative" question.

The line of questioning also upset some senior military officers, who reportedly asked Thai PBS to remove Nattaya as host of the programme after visiting the broadcaster's Bangkok office to meet with management in October.

Thai PBS has since withdrawn as one of the organisers of the People's Voices programme, although the station continues to air the show, sending reporters to the public forums and actively reporting the events that the NGOs continue to organise.

Nattaya told the Bangkok Post Sunday her question was quoted out of context.

"They did not watch the prior conversation and the answers that came after," she said, adding that the episode had provided an opportunity to southerners to clear up misunderstandings about their political stance.

Supat Hasuwannakit, who was one of the forum participants, later posted a message online, saying: "For me, the question is very important and the southerners who were the main drivers of the political movement with the People's Democratic Reform Committee have to answer.

"I would like to answer Khun Nattaya's question: in short, we don't want the coup. We want reform and we dream of the reform of Thai society to give the public the power to determine the direction of the country.

"But our society is not mature enough to have the military standing behind the people. After the coup, the military asks people to wait. And that is the cause of our frustration," he said.

The removal of Nattaya has sparked an extensive debate on social media between those who disagree with what they see as flagrant media intimidation and those who disapprove of Nattaya's questioning style.

"I have been attacked by both sides. That may show that I am neutral," quipped the reporter, who has been in journalism for 20 years.

"The programme was designed to provide a safe public space where people can speak their minds," she said. "If we hide the conflicts and don't allow people to speak about their differences, it is a negative peace."

Nattaya said she had found from meeting people in various provinces that people are desperate not only to share their views on politics, but also on what's going on in their communities and local issues such as land distribution.

Sometimes during filming, the journalists and cameramen would step out of the room to allow people with different opinions to talk amongst themselves in a closed-door meeting.

"After the closed session, they came out and said they all wanted the same thing," Nattaya said. "They want a safe space to discuss their different opinions."

Nattaya has seen the ups and downs of the industry. She was among the first generation of news reporters to work with iTV before she, along with some 20 other reporters, was sacked after the station was taken over Shin Corporation.

"I spent four years in court," she said.

Asked to describe the media situation now and then, she said: "Currently, people who have the power think our job threatens them. Moreover, there is social bias. People think we belong to certain [political camps]," she said.

Thai PBS reporters have taken to social media in the wake of Nattaya's removal to campaign against media intimidation. Many posed with their hands covering their mouths, eyes and ears as a symbolic gesture to ask the government to stop intervening in the media.

"I am thankful for my peers and Thai PBS management," Nattaya said. "The campaign is not for me personally. It is for the press freedom."

PARIS - World number one Iga Swiatek was the only top 10 women's seed left standing at the French Open on Saturday as Casper Ruud and Holger Rune gave Roland Garros a rare Nordic twist with landmark performances.