From the time Patty was a little boy he hankered for the spotlight. He loved being noticed and showing off his talent. “When I grow up, I want to be a star, I want to be famous, I want to make a movie,” Patty recalled of the goal he set for himself all those years ago. 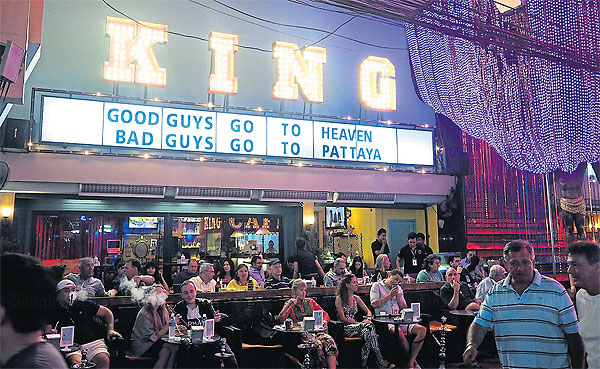 ON SET: Pattaya’s Walking Street has long been a destination for sex tourists, but is increasingly attracting pornographic film-makers, mostly from Europe and Japan.

But growing up, he didn’t feel comfortable in his own skin. He decided to come out to his parents and began his life as a katoey. Patty, who is from the south of Thailand where Islam is the main religion, didn’t care what the reaction would be from the community. Surprisingly everyone in his village, including his family, handled it well.

Patty left the village and went to pursue her dreams at a performing arts school in another province. By the age of 18, Patty had grown up into a good-looking katoey. She felt comfortable being a she instead of a he. She became one of the glamorous dancers in a famous Phuket show and felt she was finally where she had always wanted to be.

Patty was living her dream, but at 15,000 baht a month, she felt the pay wasn't commensurate with the hard work. She wanted to use her appearance and skills to earn a living while not working quite so hard. Her friend introduced her to the world of prostitution.

She wasn’t sure at first but decided to give it a go. “I was very young at that time and very curious to try something new. So I went with my friend to walk along the beach of Patong at night. After I got my first customer I felt like it was not so difficult to do," Patty said, adding that she had been a virgin until that point. "So I left my job and started working as a full-time sex worker.”

Tall and tanned, Patty is now 21 years old. She works at a ladyboy bar on Pattaya's infamous Walking Street. Patty identifies herself as a woman. She has breast implants but has kept her male sex organs.

With a nice figure and attractive face, Patty became the star of her bar. But her admirers were confined to bar patrons and her customers.

She started posting pictures of herself on a popular dating website and received hundreds of compliments from men around the world. One of her online fans was a Belgian film-maker who contacted her with an unexpected proposition. 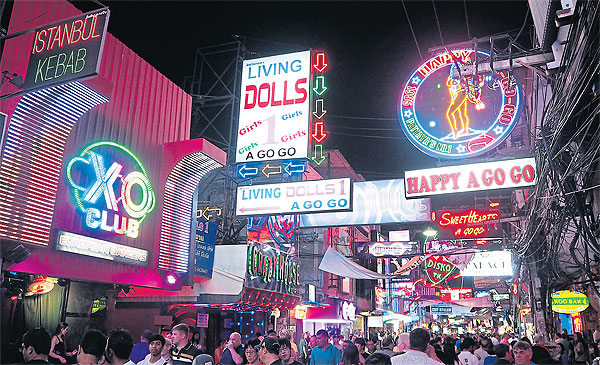 Patty is not the only ladyboy in Pattaya attracting international pornographic film-makers. While the offers can be financially rewarding, the trade-off is often a loss of dignity and anonymity.

“Ladyboys, or shemales, are quite popular among Westerners and Middle Easterners,” Mae Mam said. “Many people come to Pattaya just to have sex with ladyboys. All of the customers who come here to pick up the ladyboys are married men seeking new sexual experiences.”

Many bars in Pattaya only employ pre-op transgender sex workers. Those who have had sexual reassignment surgery are not as popular.

Mae Mam said the main reason most perform in films is the good pay.

Mae Mam has nothing to do with recruiting for the films, but is happy to offer advice and look out for those to get involved.

“It is their own choice,” she says. "I sometimes point out the pros and cons of being in a movie, to let them make their own decision. The only thing I tell them to do is to always practise safe sex. No matter how much the money is, we all have to love ourselves more than the money. I always tell all my girls to be smart." 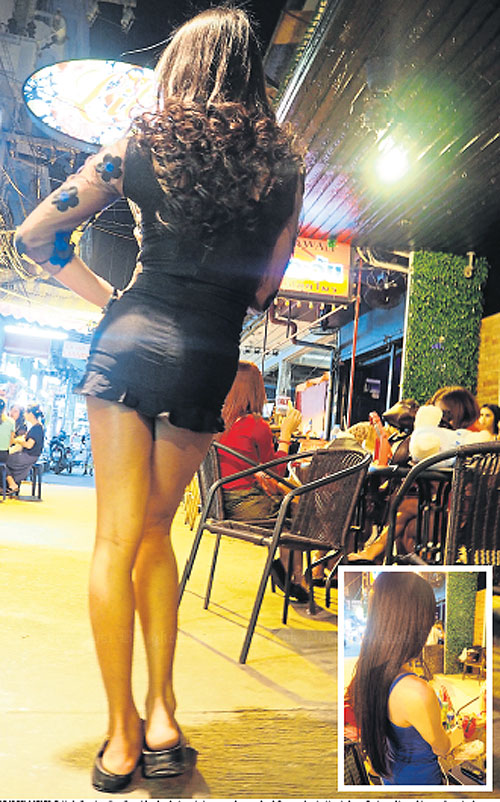 Sammy, 29, has been working at a ladyboy bar in Pattaya for two years. She told Spectrum she was approached by a Russian film-maker twice before she agreed to be in a movie. Sammy is not the “star” of her bar. She cannot rely on getting customers every night.

“I sometimes get three customers a week, which is not really enough for me,” she said. “When I heard from this Russian film-maker, I was quite hesitant because I didn’t want my family or friends to see it. But since I was struggling for money, I agreed to do it.”

Sammy got 7,000 baht offer for her first “audition” in Bangkok. The film-maker also offered to pay for her transport. During the audition, all she had to do was perform on her own.

After the audition, the film-maker asked her to return to perform with a male actor. This time he offered Sammy 15,000 baht. She agreed without hesitation.

“The minute I went in the room, I saw four men there,” she said. “They explained to me that there would only be one male actor in the movie. The rest of them were the camera and lighting team. So we shot the film. Filming lasted three hours and I went home with 15,000 baht cash in my pocket.”

Because of Patty's star quality and bubbly personality she was able to demand higher fees. She was paid 20,000 baht for her first performance for the Belgian director.

“The film-maker said the movie would be shot in Pattaya. On the day, they asked me to bring a sexy and naughty dress, put on make-up and do my hair. I did that and went to meet them at a private condominium.

“There were four cameras in the room. The lights had already been set up. After I talked to the team about the concept of the movie, the production crew left the room. We made the whole film with just myself and the actor in the room with the cameras locked in position.”

Patty has became more popular since filming the movie a few months ago. More customers come to the bar after seeing her on screen. Some want to have sex with her, while many simply want her to accompany them during their stay.

Pol Col Sukkatad Pumpanmuang, the new superintendent of Pattaya City Police Station, told Spectrum that no one has complained about adult movies being made in the area. Even if a report was made, it would be difficult to press charges.

The police can only arrest someone if they catch them at the scene in the midst of a performance. If they want to arrest someone for selling pornography, the suspect must have sold the material inside Thailand. There are no laws to stop film-makers making pornographic movies in Thailand and selling them in other countries.

“The best we can do is arrest the film-maker and fine everyone involved. Then we have to let them go without jail time,” Pol Col Sukkatad said.

In 2004, 1,044 Thai people were surveyed on their views about pornography by Suan Dusit Poll.

Asked which types of pornography cause the most problems in society, 23% cited material relating to incest, 22% gang rape, 20% hidden camera pornography, 19% child pornography, while 16% pointed to sex toy advertising.

Of all the respondents, 65% warned there is no way to solve the problem since the law fails to tackle the issue, and pornography is spread through numerous channels.

A separate research project by a Chulalongkorn University student collected data on how pornography affects children aged nine to 11, students in Prathom 4-6 and junior high-school. It found 18% of boys and 14% of girls had been exposed to pornography by the time they reached Prathom 6. Some children — 0.3% of boys and 0.5% girls — had even viewed pornography in kindergarten.

Half of the children in the study said they accessed pornography through friends who passed movies to one another. Boys said they found it easy to find pornography on the internet, video tapes and DVDs, while girls reported seeing pornographic magazines and comics.

“I feel embarrassed when people ask me if I am that person from the film. I always say no. It is not something I am proud of,” Patty said.

“I am working hard these days to save money and pursue my dreams. Besides sending cash home to take care of my family, I want to save up enough to open my own dancing school,” Patty said.

“When I was younger, I thought I wanted to have sex-change surgery when I had enough money. Now that I can afford it, I think it is kind of unnecessary and irrational. My life doesn’t feel incomplete today. So I will save up all the money and go back to the South to open my own school.”

Sammy has also had enough after making two movies and vows not to do it again, even if she gets a big offer. She is trying to save cash to open her own hair salon.

“I was a hairdresser before coming to work in Pattaya. I loved doing that but I wanted more money. That's why I come here to be a sex worker,” Sammy said.

She added that she is tired of being with one man after another and is thinking about moving back to her home town in western Thailand.

Prince, a 33-year-old ladyboy and retired sex worker, said the industry is an unsuitable career choice in the long run.

During her golden days 10 years ago, Prince made at least 20 pornographic movies with filmmakers from all over the world. She earned a lot, but felt it was time to bow out when she turned 30, since the industry is constantly being swamped with younger and more beautiful girls.

Prince is now one of the most well-known faces in Pattaya. She has no dreams of opening her own business. Her only wish is to pass her experience of being a sex worker on to other ladyboys, to stop them facing the difficulties she did.

“I educate people on how to protect themselves, because we never know who our customers will be. I am there if there is a problem with the police or anyone else. I thought I would quit completely after 30, but now I have a new purpose,” Prince explained.

“I get nothing back in return but the satisfaction of helping someone who is in the same situation I was decade ago.” n

Warrants for 3 brothers for acid murder