A woman offers prayers to a spirit house in a slum area in downtown Bangkok. Thailand's spiralling household debt is just one of a number of troubling malaises afflicting a struggling economy that shows little sign of improvement despite the government’s promises to revive the country's economic health. (AFP photo)

Sinking in heavy repayments to loan sharks, Non says payday is nothing more than a cruel reminder of his dire finances.

Household debt has surged to alarming levels in Thailand; just one of a welter of issues dragging on the economy despite a vow by the government to revive the kingdom's fortunes.

"I have more outgoings than income," Non, a 37-year-old tyre-factory worker tells AFP from his modest family home on the outskirts of Bangkok.

"Each month, 30% to 40% of my salary goes solely towards repaying the interest on my loans," he adds. 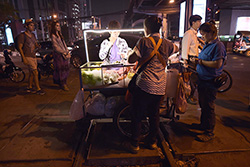 A resident of a slum area sells food to passers-by at the entry to a slum area along a main road in downtown Bangkok. (AFP photo)

Thai households are among the region's biggest borrowers, a credit binge stoked by populist policies and low bank interest rates - but also low wages that keep the poor perilously close to the breadline and make them ready bait for illegal loan sharks.

The debt levels are worrying the generals who seized power last May promising to end a near-decade of political turmoil and restore zip to Thailand's once-dynamic economy.

The country narrowly avoided recession during protests against the ousted administration of former prime minister Yingluck Shinawatra, which paralysed government spending and frightened off tourists and investors.

Nine months after the coup, signs of economic recovery are still few, with fourth-quarter GDP figures, to be released on Monday, expected to come in at around 0.8% for 2014.

There is some good news, with tourism arrivals bouncing back despite martial law, and exports - which account for around 60% of the economy - showing a slight improvement.

Yet two key Thai commodities — rice and rubber — are currently at record-low prices and the country is flirting with deflation. And with the political outlook still uncertain, consumer confidence remains depressed as Thais hold off from buying flats, cars and durables. Two young men sit on railway tracks as they watch television in a slum area in downtown Bangkok. (AFP photo)

At the heart of that malaise lies Thailand's eye-wateringly high household debt.

"Thailand has seen one of the sharpest surges in household debt in the region, with the debt-GDP ratio rising from 60% to 85% over the past five years," Krystal Tan, an analyst with Capital Economics, told AFP.

Low interest rates and widespread access to credit through banks and illegal loans have led to a deeply ingrained culture of borrowing over the past decade.

But policies by the previous government, including a huge tax rebate scheme for first-time car buyers, have also encouraged millions to take out loans that they are now struggling to repay.

The debt ratio is worrying the government, which has pushed back elections until the end of the year or early 2016, and pegged its legitimacy to steering an economic revival.

"Please refrain from racking up debts," Prime Minister Prayut Chan-o-cha told viewers in a recent edition of his weekly televised address, warning mounting bills "may slow down the country's progress."

Non's family is typical of those living beyond their means.

In 2011, the region was hit by huge floods that destroyed their refrigerator, television and furniture. Non borrowed to replace those items, partly from his bank, but mostly from illegal loan sharks who charge interest rates of between 10% and 20%.

He just about managed his debts until the factory cut his hours as the economy slumped. 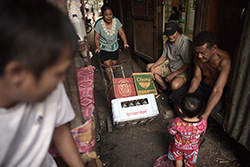 A woman delivers bottles of water and beer on a trolley along an alley in a slum area in downtown Bangkok. (AFP photo)

It is a story all too familiar to Suthila Leenkam from a local non-governmental organisation, the Arom Pongpangan Foundation.

"The debt situation is getting worse," she says. "It leads to more family problems and to more divorces because people are in debt," she said.

Analysts tip the government to spend its way out of trouble, despite a vow to tighten the purse strings after what it says were years of profligacy from elected civilian governments.

The military has promised to unleash billions of dollars on much-needed infrastructure projects. But the money is yet to kick into the economy.

As Barclays Capital put it in a note last month, "the main impediment to growth at present is the slow pace of fiscal spending, which is also delaying investment and consumption decisions."

Earlier this month, the finance minister said he had been told by Gen Prayut to aim for at least 4% GDP growth this year. But the World Bank says growth will only hit 3.5% in 2015 and 4% next year.

Already squeezed by months of bad economic news, those at the bottom of the ladder are hoping for an upturn in fortunes.

"Working class Thais, like vendors and workers, struggle to earn enough money and their incomes are no longer sufficient to cover their expenses," Narong Petprasert, economics professor at the University of Bangkok, told AFP.