The condominium market in Pattaya has been growing continuously since 2007, with a total of 181 projects and 63,000 units developed. While sales showed a slight upturn last year, the outlook has dimmed for this year because of the sharp drop in Russian visitors, who represent a major market for condo purchases in the resort city.

The Jomtien area remains the most popular choice for developers because of its relatively long beachfront and proximity to Pattaya city centre. Thus Jomtien is the priority for potential development after Pattaya itself, where beachfront sites are becoming more limited and expensive. However, Pattaya City continues to see its share of new condominiums, though more developments tend to be scattered around North Pattaya and South Pattaya.

Non-branded developers account for 79% of all the condominium units in Pattaya, compared with 21% for better-known names including those listed on the Stock Exchange of Thailand. Many of the non-branded condominiums were developed by locally based companies owned by both Thai entrepreneurs and foreigners. The Global Top Group, Matrix Group and Riviera Pattaya Group are among the well-known developers owned or co-owned by foreign entrepreneurs. It is noteworthy that all of condominiums developed by branded developers were high-rise buildings except The Trust Central Pattaya by Q House, which was a low-rise.

Different buyer profiles can be found depending on locations. The main buyers of condominium units in the area are Europeans and Russians looking for vacation homes or investment assets. Wong Amat and Pratumnak hill, unlike Jomtien and Pattaya City, offer more peaceful and private residential areas with many condominiums occupying beachfront sites with panoramic sea views of Pattaya harbour.

The main buyers on Pratumnak Hill area are Europeans, Britons and Americans, as well as Scandinavian travellers and retirees who usually buy to have a second home or a post-retirement permanent residence.

Wong Amat, where many prestigious projects have been located, is known as the most expensive residential area in Pattaya. It is popular among wealthy Thais, Europeans, as well as Russians who are looking for second homes. 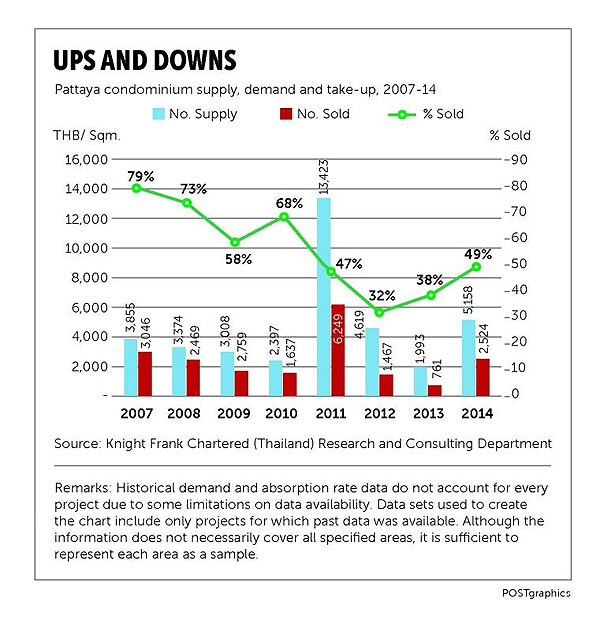 While tourism to Thailand has begun to recover after a rocky 2014, Russian visitor numbers have plunged because of the oil price crash and the depreciation of the ruble. Some industry executives have forecast a decline of up to 30% in Russian visitors to the country, which has huge implications from Pattaya since it is by far the favourite destination for Russians.

The absence of Russians will diminish the potential for condominium sales in Pattaya. As well, problems could arise with Russian buyers failing to take transfers of units already purchased because they could no longer afford them. n

Risinee Sarikaputra is the director of research and consultancy at Knight Frank Thailand. For more inquiries, email Risinee.sarikaputra@th.knightfrank.com.