Will chao din take a powder?

Lop Buri is one of the country's largest producers of din sor pong, but due to a lack of natural resources the industry could soon grind to halt

Payong Huangmitr makes a living selling din sor pong — the natural white powder Thai people put on their faces and mix with water during Songkran. During next week's festival, where revellers' faces everywhere in the country will be painted with the powder, she expects to rake it in.

"We usually earn about 15,000 baht a month. But the rising demand for din sor pong pushes up the family income and we receive more than 20,000 baht extra," said Payong, 58.

Pictures of Thais with the off-white powdery paste smeared on their faces has long been a symbol of the Thai New Year celebration. But the tradition of the Thai water festival has significantly changed in past years. The silver bowls people use to pour water over the elderly have been replaced by heavy-duty water pistols. Males use din sor pong paste as a way to take liberties with young ladies. Excessive use of din sor pong is also believed to cause sewer blockage.

For these reasons, certain water battlefields in Bangkok such as Silom Road and Khao San Road have banned din sor pong in past years. This year, authorities have yet to set a clear policy regarding its use. 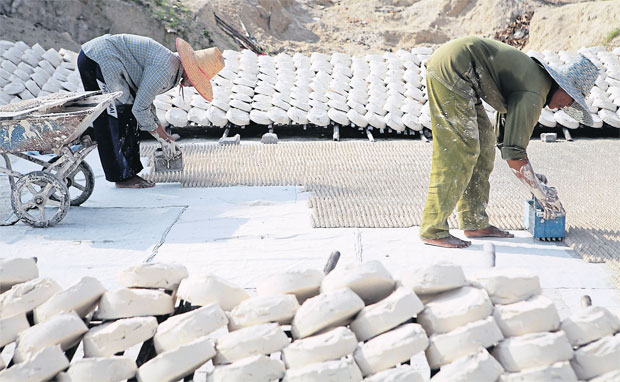 "If the government bans the use of din sor pong during Songkran, it will definitely affect our income," she said.

A native of Hin Song Kon village in Muang district of Lop Buri province, Payong is the third generation in her family to produce din sor pong powder. Lop Buri, according to her, is one of the country's largest producers of din sor pong. Her village is one of few places in Thailand where marly limestone — natural talc used for producing din sor pong — can be found underground.

In Lop Buri, there are three villages that make the powder. In Hin Song Kon alone, 60 families earn a living by making it, using local wisdom that has been passed on from one generation to the next. Locals learn the production through on-the-job training. 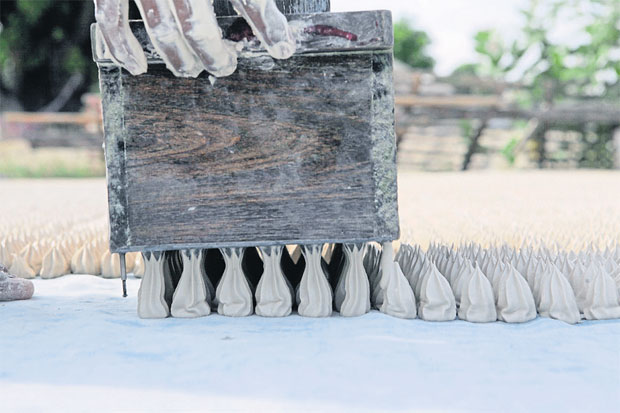 These din sor pong droplets must be sun-dried for two days before they are ready to be sold. 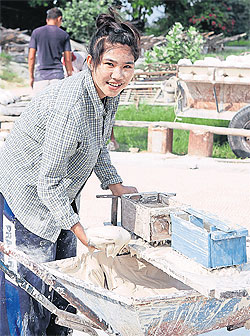 Payong's mother, Cha-aim Phuhong, has made din sor pong since she was seven years old. She follows the same routine every day, waking up as dawn breaks, beginning work and finishing before noon.

"First you sift the soil before mixing it with water," the 76-year-old explained, as she wiped the powder from her pants. "Then the mixture is left to sit there for a day or two until it becomes clay with a smooth texture. After that, the clay is ready to be shaped. The powder is all natural and fragrance-free.

"Making din sor pong is a tough job. We have to stay under the scorching sun because the clay mixture must be sun-dried. That's why we try to finish everything before midday, because otherwise it would be too hot," she added.

Locals make two types of din sor pong — circular blocks and droplets. The droplets are most popular during Songkran, but the large blocks will be ground and milled until they become similar to cement powder. din sor pong powder is used as an ingredient in making goods such as incense sticks, house paints, toothpaste, blackboard chalk and insecticide chalk. Sprinkling the powder in fruit orchards can also help prevent mould.

din sor pong is also heavily used in spa treatments, as it is claimed to contain antibacterial agents that are able to fight acne. It is also used in religious ceremonies.

Payong's neighbour, Rampueng Wichienchart, also produces din sor pong. The 45-year-old has earned extra income of approximately 60,000 baht sine January, due to increasing demand of the powder, especially for Songkran. Rampueng has observed local people, her ancestors included, making din sor pong for decades. Yet she can't help worrying if in the near future the local business will be forced to a halt due to a lack of natural resources.

"In the past, local people could just dig holes in front of their houses and make din sor pong powder from the white soil they dredged up," she recalled. "But these days we are not allowed to do that anymore, because it would cause damage to the ground. So now we have to buy white soil from elsewhere, mostly from nearby areas. In the next, say, 10 years, if there is no more white soil, I think the art of making din sor pong will probably die." 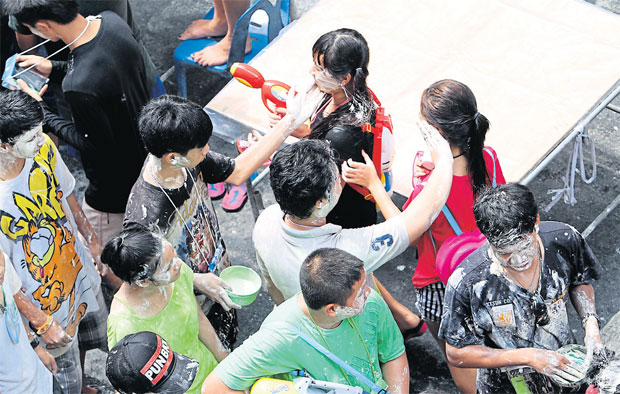 Last Songkran, the authorities banned the use of din sor pong on Silom Road, but the powder was smuggled into the area by vendors.

Payong said the image of din sor pong has been tainted in recent years, as people use the powder in inappropriate ways — especially in large cities. But as a chao din, she strongly hopes that people view din sor pong as part of a Thai tradition and try to preserve it.

"People in the old days saw lots of benefits from din sor pong," she said. "Farmers used the powder to cure skin irritations. Parents gave a mixture of din sor pong and water to their kids to treat stomach aches. Today people see and use it differently. So I urge the young generation of today to celebrate the water festival in a polite manner — splashing water and playing with din sor pong nicely. This is the best way we can keep our Thai tradition alive."