The day the nightmare started

As Cambodia marks the 40th anniversary of the Khmer Rouge takeover, one of the few photographers to document the calm before the carnage tells his story in words and images

House of horrors: The Khmer Rouge torture centre they called S-21 is now known as the Tuol Sleng Genocide Museum.

April 17, 1975, is a date that sends shivers down the spines of all Cambodians. It was the day the Khmer Rouge marched into Phnom Penh and took control of the country after years of bitter fighting in the countryside.

Three foreign photographers ventured onto the streets of Phnom Penh on April 17 and captured images of the victorious Khmer Rouge fighters entering the besieged city, taking enormous risks to photograph the mysterious communist guerrillas who had a well-deserved reputation for brutality and taking no prisoners.

The images captured by American photographer Al Rockoff, Frenchman Roland Neveu and Japanese photographer Naoki Mabuchi, who passed away in 2011, are some of the most stunning ever taken in a war zone.

“When the Khmer Rouge entered Phnom Penh, people lined up along the sides of the street waving, while loudspeakers announced ‘the war is over, do not resist,’ ” Rockoff recalled.

“People thought the worst was over ... little did they know it had just begun.”

Neveu said: “For anyone familiar with Cambodia’s horrific past, or indeed anyone who survived the years of darkness at the hands of the Khmer Rouge, the 17th of April 1975 was the day the nightmare started.

“It marked in people’s minds the date when the country began its decent into hell.”

To mark the 40th anniversary of the start of one of the world’s worst genocides, Neveu has released a new book, The Fall Of Phnom Penh, packed with images he took both before and after the fall of Cambodia’s capital city. Neveu also tells his own remarkable story of near death and survival while photographing one of the most murderous regimes the world has seen.

As Khmer Rouge fighters made their way into the city on the morning of April 17, none of the remaining foreign reporters and photographers who took refuge in the grounds of the French embassy knew what to expect. 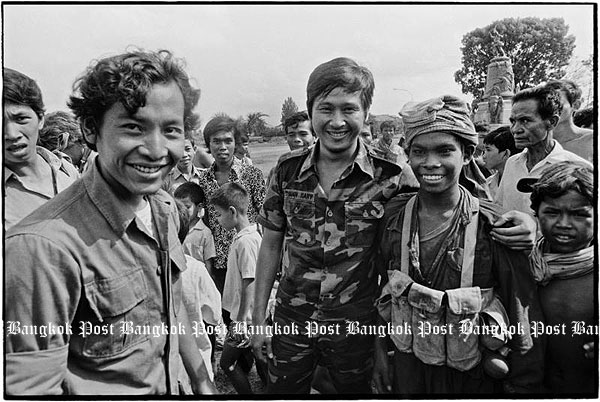 Doomed: Former government soldiers, left and centre, surrender to a Khmer Rouge cadre. Most of the soldiers who surrendered were taken to the Olympic Stadium and quickly killed.

“I had seen the badly decomposed or disfigured corpses of Khmer Rouge soldiers on several occasions on the front line, but this was the first time I’d seen one alive,” Neveu writes.

“At first nobody moved as we knew it was not a simple case of being brave or foolhardy. Then, just across the road, a few excited children holding hastily-made white flags above their heads walked out of a side street to meet the approaching guerrillas.

“The ice was broken. Walking cautiously across the road, we approached the group, keeping an eagle eye on the whole area, feeling not entirely safe. The Khmer Rouge soldiers were probably enjoying their first moments of relative safety in many days since the operation to seize the city had begun.”

The calm did not last long. By early afternoon the Khmer Rouge were ordering all residents to leave the city with a minimum of belongings, the start of what turned out to be a death march for thousands. The city remained mostly empty until the Vietnamese invasion almost five years later. “Some soldiers were shooting in the air in order to force the inhabitants to flee the city,” Neveu wrote.

It has been estimated that at least 20,000 people perished during the evacuation of the capital. It marked the start of what the Khmer Rouge leaders called the “Year Zero” campaign, emptying towns and cities and forcing city-dwellers to become slave labourers in the countryside. By some accounts, Phnom Penh’s population dropped from two million to 25,000 in only three days, and by the end of the Khmer Rouge rein in 1979, one in four Cambodians had died.

Foreigners were ordered to move to the large grounds of the French embassy, and Neveu, Mabuchi and Rockoff joined them after spending the day roaming the city, taking photos of various Khmer Rouge units and government soldiers surrendering and handing over their arms, which were being piled up on street corners, overseen by Khmer Rouge cadres. There were some close calls for the photographers before they made it to the safety of the embassy grounds. 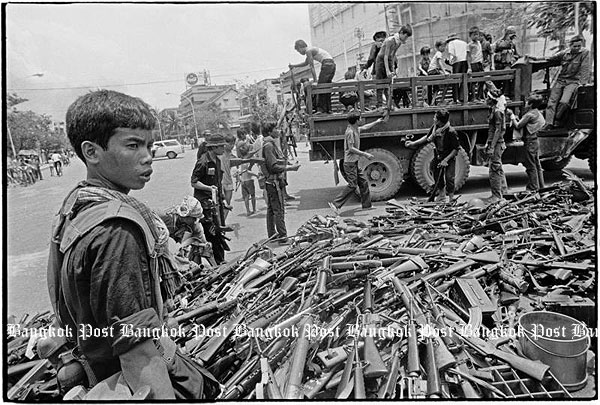 Two years ago Rockoff gave evidence at the international court in Phnom Penh investigating the crimes against humanity committed by the Khmer Rouge leadership and told of one close encounter.

“I photographed the collection of weapons; disarming of soldiers; a large group of soldiers travelling under guard being sent towards the Olympic Stadium,” he said.

“I was standing next to Roland Neveu, and one of the cadre came up to him and asked in French: ‘Where are the Americans?’ Roland Neveu said: ‘They departed.’ I was very glad he did not ask me because I do not speak French.”

The large grounds of the French embassy quickly filled with people seeking refuge, but out on the streets the exodus was in full swing, and no one was spared.

“From where I stood, I could see groups of people heading north up the boulevard, including men, women and children,” Neveu writes. “There was even a group of doctors or nurses pulling a cart with what appeared to be patients on it. I didn’t know yet that the nearby Calmette Hospital was also being forcibly emptied.”

Estimates of how many people perished during that period vary from 1.2 million to three million, but most agree that one in four Cambodians died from 1975-79. Neveu’s photos and his story of the events that unfolded on that tragic day for Cambodia should be compulsory reading for any student of Southeast Asian history. n 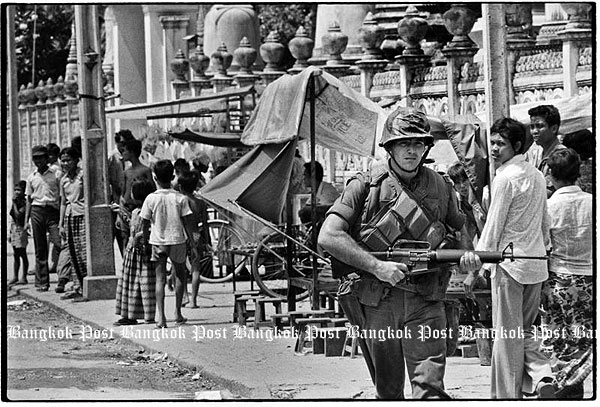 Fleeing: A US soldier oversees the evacuation of US embassy staff five days before the city fell.

‘The Fall Of Phnom Penh’ is published in Thailand by Asia Horizons Books and is available at Asia Books and Kinokuniya for 1,270 baht.

An exhibition of the photographs in this book by Roland Neveu will have an opening party on Friday and run until May 24 at the Soy Sauce Factory, Soi 24, Charoen Krung road, Bangkok. Another exhibition will be held on Tuesday at Meta House in Phnom Penh. His book will be available at the exhibitions at a discount price of 1,000 baht.