Bollywood actor Salman Khan sits in a car as he leaves a Mumbai court, where he secured interim bail after being sentenced to five years on jail for a drunk-driving offence that took place 12 years ago.

Last week, Bollywood star Salman Khan was convicted in India of culpable homicide, negligence and reckless driving for running over five homeless men and killing one of them after a night out drinking. The crime took place 12 years ago and Khan's five-year jail sentence has been suspended pending an appeal, but it was noteworthy that someone worth US$200 million faced justice at all.

In Thailand, it is rare for someone of Khan's wealth or stature to be convicted of anything. But where drunk driving is concerned, even the less well-connected often get off very lightly even when their actions cause death or injury.

The most high-profile illustration of the weakness of local law enforcement involves 27-year-old Vorayuth Yoovidhya, the heir to the Red Bull fortune in Thailand, who struck a police officer and sped away from the scene after dragging the man's dead body for blocks underneath his Ferrari in August 2012.

The young billionaire was later found to have a blood alcohol concentration (BAC) of 64.8 milligrammes per 100 millilitres of blood (exceeding the limit of 50mg per 100ml). He has yet to even appear for an "appointment" with prosecutors, let alone be arrested, his lawyer having secured seven postponements so far. The case could drag on for years.

More recently, the public is closely watching the case of a university student who was found to be drunk after her car ran down a group of cyclists and killed three of them earlier this month in Chiang Mai.

The two cases are just some of the tens of thousands involving alcohol-related road accidents, in which the law is applied unevenly if at all.

"Penalties for drunk driving in Thailand are quite moderate and reasonable, but the biggest issue that has caused so many alcohol-related accidents is weak law enforcement," said Tairjing Siripanich, the secretary of the Don't Drive Drunk Foundation. 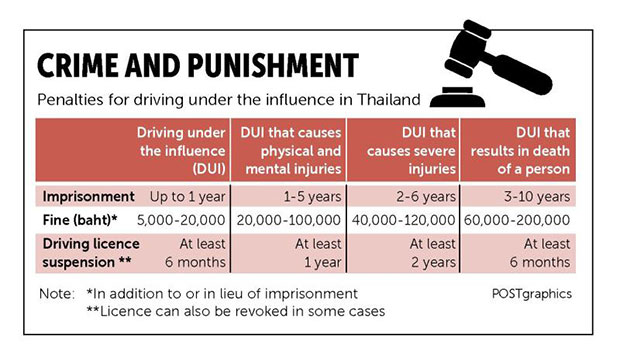 Under Thai law, drunk drivers can face fines of up to 200,000 baht and/or 10 years in jail plus suspension or revocation of their driving licences. But in many cases, the police and courts grant leniency.

For the well-connected, meanwhile, the magic words "Do you know who I am?" usually do the job if they are pulled over after a night of partying, added Prommin Kantiya, director of the Accident Prevention Network Thailand.

Even those without much wealth or power know that if they get caught, a few thousand baht in fines — or bribes — is the most it will cost them.

Although drunk driving is a highly irresponsible act and shows an utter disregard for others, Thai enforcers often accept guilty pleas for injury caused by negligence or recklessness — which carry lower penalties than drunk driving.

"In most cases when the drivers are young, judges would show mercy to them with lower penalties," Dr Tairjing said.

Citing the case of the Chiang Mai student whose actions killed three cyclists he said: "Did she even get her licence suspended or will she be punished according to the laws? I don't think that will be the case."

In many drunk-driving cases in Thailand, drivers will be given suspended sentences, so they can go on living their normal lives as long as they don't get caught again. This leads to the attitude that one is untouchable. Mr Prommin illustrates it with a quotation from a culprit he met recently at the Probation Department:

"I get arrested for drinking and driving regularly, but I was always able to talk it through with the police. This time I guess I was a little unfortunate and that's why I ended up here. It's such a waste of time."

It's time to send a different message to the public, adds Dr Tairjing.

"Thai judicial process has to be stricter and for drunk drivers, they should never allowed the suspension or probation period.  ... It's too convenient for cases like this," he said.

Thailand is ranked second in the world (behind Namibia and ahead of Iran) in terms of traffic fatalities, with 44 deaths per 100,000 people (5.1% of Thailand's overall deaths), according to statistics from the World Health Organization and the University of Michigan Transportation Research Institute in the United States.

The WHO report indicated that 26% of road deaths in Thailand involve alcohol. In Malaysia, the Road Safety Council estimates that 30% of road accidents are caused by drinking and driving. In Singapore, 12 people died as a result of drunk driving from January to October last year. In the same period, 2,588 arrests were made for drunk driving, according to the Parliamentary Secretary for Health and Transport. 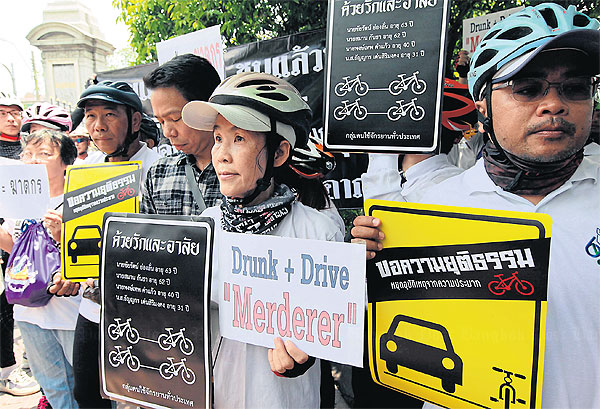 Bicyclists stage a protest following an incident in which a university student who had been drinking ran down a group of riders in Chiang Mai, killing three of them.

Mr Prommin said that if laws were tougher, and enforced more fairly and effectively, "I guarantee that the number of alcohol-related road accidents in Thailand will drop drastically within three to five years.

"If the police force cannot do their job properly, they can divert the responsibility to other parties or non-government organisations," he said. "The military government should unknot this decade-long problem and consider a structural reform of the Royal Thai Police."

For many police, he added, traffic duty is not seen as a priority, unlike criminal cases which will allow them to move up the ladder faster.

"The police have been saying for decades that they don't have enough devices or manpower to keep track of all drivers as less than 1% of the policemen are assigned to take care of traffic accidents," said Mr Prommin.

Pol Col Siriphon Kusonsinwut, chief of administration at the International Law Enforcement Academy (ILEA) in Bangkok, argues that fixing the police structure is less important than fixing social norms: People need to be made to think that being drunk in public is shameful and driving under the influence is a crime.

"We have sufficient traffic police to take care of road safety, but arresting all the wrongdoers is like dealing with a handful of children that are all ready to dodge the law. ... It's very difficult," he said.

"We need to implant a whole new social value in the mindset of Thai people so they will use better judgement when it comes to alcohol-related issues. They need to be convinced that being drunk in public is socially unacceptable behaviour."

Dr Tairjing said the government had done "quite a decent job" of raising awareness about drunk driving, but words must be backed with deeds.

"People have to be afraid of the laws," he said. "They should have the perception that drunk driving is never worth it at any cost. Awareness isn't enough, you need proper enforcement of laws and judicial processes.

The average punishment in Japan for drunk driving includes fines upward of $6,000, and the most notable part of the new law is that every passenger in the car is liable if the driver is drunk and they agreed to ride.

European countries including France, Italy, Belgium and Germany use the same BAC level as Thailand at 50mg per 100ml of blood. Sweden, Poland and Norway have limits of 20mg, while in Romania and the Czech Republic, any alcohol at all in the blood is grounds for arrest.

Though Japan has a BAC limit of 30mg, the police officer has the discretion to determine whether the driver appears to "present a risk of driving improperly because of alcohol" without testing for BAC, so the country is seen as supporting zero tolerance.

"Thai law should focus on the right areas instead of prohibiting stores from selling alcoholic beverages," added Pol Col Siriphon. "These range from penalties for all parties involved in a drunk-driving case such as the sellers at restaurants, the owner of that car or all passengers in the car."

He added that Thailand should start considering laws that prohibit a person from being under the influence of alcohol in public spaces, not just behind the wheel.