Thirsty for change, a new breed of artisans are challenging legal restrictions and industry giants with their DIY amber nectar

Dubbed Thailand’s “Silicon Valley” of brewers among the craft beer community, Nonthaburi province is where it all began. It was where Wichit Saiklao, an army colonel, started Chitbeer, after two attempts at brewing in his condominium failed. It was also where all eight members of the Sandport beer collective grew up, while a major malt importer has an office in Pak Kret district. The island of Koh Kret even hosts beer-tasting nights on Fridays.

“I think it’s a coincidence that Pak Kret came to be the ‘capital’ of Thai home brewers,” Col Wichit said. “But I think the coolest road is the one behind Major Hollywood Pak Kret. If we closed the streets, got a lot of brewers together and had a barbecue, how good would that be?”

Brewing your own wine and beer in Thailand is illegal. But with dozens of enthusiasts crossing the Chao Phraya river every week to take one-day courses with Col Wichit, the movement is raising a challenge to the legal restrictions that have prevented craft breweries from flourishing until now.

“Last year, I could count the number of brewers in Thailand on one hand,” Col Wichit said. “But now, I’ve run out of fingers and toes to keep track of them. It’s definitely a trend.”

As a college student in Atlanta, Georgia, Col Wichit’s friends would invite him over to their apartments to drink homemade beer. It was 1996, when craft beer was already popular in the US, and Col Wichit was intrigued.

He came back to Thailand in 2002. The desire to try his hand at home brewing stayed with him, but it wasn’t until November 2011 that he attempted two batches at his condominium, both of which failed.

Little did Col Wichit know that Chitbeer would later become one of the best known craft beers in the country. Some bottle: Home brewing is illegal, but that hasn’t stopped craft beer makers from flourishing.

Undeterred, Col Wichit tried making his own beer again when he bought a house on Koh Kret — an artificial island in the Chao Phraya river in Nonthaburi — in 2012. This time, he found success.

“A lot of people were wanting to make their own beer at the time, but they didn’t know how to start,” the 44-year-old said. “When word of mouth got out that I was brewing in Koh Kret, people visited and saw that it requires very few tools. If you can make coffee, then you can make beer. It’s not that hard.”

In the initial stages of the project, visitors would put money in Col Wichit’s donations box after tasting his beer. As more and more people came, he started charging them.

Chitbeer now produces four or more new flavours every week, with a production capacity of 100-120 litres. His house has been turned into a brewery, classroom and restaurant, where customers can purchase a glass of beer for 100 baht.

Since October last year, Col Wichit has hosted weekly classes in an attempt to create what he calls an “army of home brewers”.

So far, he has taught about 120 students, including several top brewers who took part in Thailand’s first home brew competition last month.

“People want a choice, but in some industries there isn’t much. So what do we do when we want some variety? We can’t just let the big breweries dominate,” he said. “How is it possible that there are only two or three main brands of beer for a population of more than 60 million?”

While beer in the US is manufactured by more than 3,000 breweries, Thailand’s beer market is dominated by two major companies: Thai Beverage, which produces Chang beer, and Boon Rawd Brewery, the maker of Singha and Leo.

Col Wichit estimates there are no more than 100 local brewers making a significant amount of beer, but only between 10 and 15 sell their products on a commercial scale.

These artisans focus on promoting their beer at events, while the brews are available at a select few restaurants, if customers know the “secret code” to obtain them. 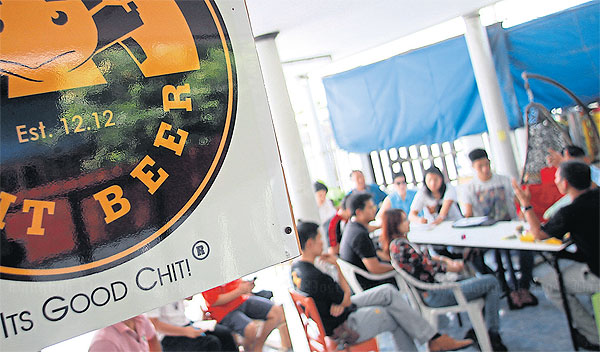 Home invasion: Wichit Saiklao’s house has been turned into a brewery, classroom and restaurant. His Chitbeer brand turns out at least four new flavours a week, with a production capacity of 100-120 litres.

Nontarat Phaicharoen was first introduced to home brewing when he saw chefs from the White House making their own beer on YouTube four years ago.

In November last year, he and his friends pooled 7,500 baht to attend a one-day brewing course with Col Wichit. All the ingredients and equipment were provided.

Two weeks later, Mr Nontarat and his friends were able to take home more than 50 bottles of their own beer.

The friends now regularly make their own batches of beer. The ingredients cost between 900 and 1,000 baht for every 20 litres. They, like most home brewers, prefer to make ale, which is brewed at a higher temperature than lager.

“One thing that people always question is why we are forced to drink three brands — Singha, Chang and Leo,” said Mr Nontarat. “It’s like we’ve been drinking lager for half of our lives. If we’re brewing it ourselves, we make ale that is similar to German and Belgian beer.”

Four local websites offer mail-order brewing supplies to customers. But groups such as Sandport, which originated in Nonthaburi’s Tha Sai district, adapted most of their equipment themselves.

The collective started brewing early last year on a budget of 3,000 baht. Instead of using a barley crusher, which sells for 4,500 baht on one local website, they started out with a simple mortar, and later moved on to using a pasta grinder.

Another website sells a beer kit for 4,300 baht, excluding the brew kettle, which can cost up to 10,000 baht. Sandport began by using a noodle boiler as an alternative.

As demand grew, the group upgraded their equipment and began to share the fruits of their labours with friends and party-goers at music festivals.

Supapong Pruenglampoo, Sandport’s co-founder and a bass player, said Thai brewers often use local ingredients to give their beers a unique taste, which impresses foreigners.

One of Sandport’s beers, for instance, is flavoured with kaffir lime — a fruit native to tropical Asia — instead of the orange peel used in Belgian beer. 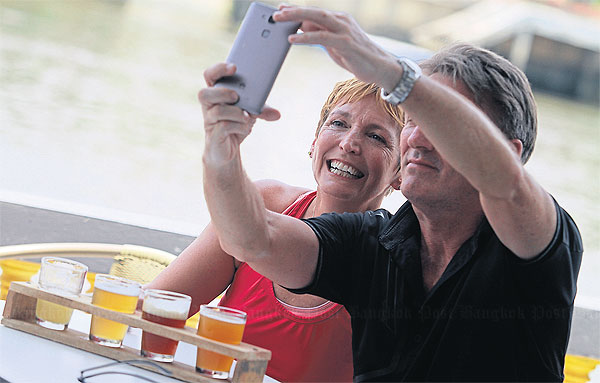 Say cheers: Visitors to Chitbeer can purchase a glass of the good stuff for 100 baht. The brews are flavoured with a range of local fruits and spices to give them a distinctively Thai flavour.

Brewing your own wine and beer and having the equipment to do so is illegal under the 1950 Liquor Act, with a maximum penalty of 200 baht for making it and 5,000 baht for selling it.

“If you think about it, that’s part of the fun, because you’re part of a resistance,” said Col Wichit.

“But we can’t carry on like this forever. One day it will start to feel uncomfortable.”

The law, however, allows registered companies to apply for a licence to produce and sell beer, provided they have registered and paid-up capital of at least 10 million baht.

Goldencoins is the largest craft brewer in Thailand, with a production capacity of 2,000 litres per month. The brewery was founded in 2014 by Pipattanaphon Pumpo, an architect who owns a restaurant in the Yaowarat area and had been home-brewing since 2012.

Goldencoins distributes bottles of beer priced at 100 baht each to around 20 bars and restaurants in Bangkok, Chiang Mai and Kao Yai. The customers then get the products at a marked up price.

“It’s more expensive than local brands you can find on the market, but it’s cheaper than foreign beer,” Mr Pipattanaphon said. The 35-year-old is also a founding member of the Facebook page “craft brewery is not a crime”, which was initially set up as a support group when the owners of My Beer Friend and Chitbeer were fined for selling their products in Chiang Mai.

The group’s name was inspired by the “skateboarding is not a crime” protest movement in cities that limit skateboarding in public spaces.

“We aren’t doing anything radical; it’s not like we’re making bootleg booze which can cause blindness,” Mr Pipattanaphon said.

“The limitations on beer production are caused by those who do not want the law to be changed.”

Today, the Facebook page acts as an informal association for Thai brewers. It contains reviews, news and events related to the local craft beer community.

After three years of brewing, Mr Pipattanaphon now intends to leave his full-time job as an architect and focus on his beer business.

He is keeping his cards close to his chest on how he might make his business legal one day, but it is unlikely the brewery will invest 10 million baht to increase production to 100,000 litres per year.

The fact the law prohibits smaller breweries from obtaining licences means they are prevented from having the opportunity to learn by trial and error within a legal framework, Col Wichit said.

“In our country, beer production is reserved for professionals; it has the essence of a monopoly,” he said.

Some brewers hope craft beer will eventually follow the path of community distilleries, which have mushroomed since they were legalised more than a decade ago.

However, many of these distilleries are low quality and were acquired by wealthy businessmen, according to a source from the Excise Department.

Hundreds of the country’s 3,900 community distilleries are actually larger than they should be under the law, and the Excise Department is in the process of checking which ones must be closed down, said the source. “I don’t think craft beer could follow the same path,” he said.

For brewers like Col Wichit, nothing can stand in the way of natural competition. He predicts that the age of beer monopolies is coming to an end.

“In the future, nothing will be monopolised,” he said. “It’s only a matter of time until the wall falls down.” n

Master of the grain: Chitbeer founder Wichit Saiklao, left, hosts weekly classes in an attempt to create an ‘army of home brewers’. So far, he has taught around 120 students, including several who took part in Thailand’s first home brew competition last month. Barrels of fun: Col Wichit believes home brewing is an easy hobby for anyone to take up. ‘If you can make coffee, then you can make beer,’ he says.

SIX OF THE BEST

3. Pheebok — secret location — ‘Holy bitter water’ said to be made by ghosts. Brewing is done on Buddhist holy days

6. Sandport — Nonthaburi — Uses Thai ingredients such as kaffir lime in its white ale

The board of the Social Security Office (SSO) has opposed extending its relief compensation scheme to subscribers made jobless as a result of the Covid-19 pandemic, according to a board member.

BRASILIA: Brazil President Jair Bolsonaro announced Wednesday that he still has the coronavirus, after undergoing a new test the day before.

LONDON: Arsenal ended Liverpool's bid to set a new Premier League points record with a 2-1 win over the champions, while Manchester City pushed Bournemouth closer to relegation with a 2-1 victory on Wednesday.