The truth is out there ... in Nakhon Sawan
Thailand
Special Report

The truth is out there ... in Nakhon Sawan

UFO believers at Khao Kala say they can talk to extraterrestrials through meditation, and they're not the only ones having strange close encounters

It was a Thursday morning and Nam was waking up after a good night’s sleep. Bleary eyed, she motivated herself to get up by counting down the weekdays on her hand.

“Two more days of school,” Nam said, reluctantly dragging herself out of bed. She headed to the back porch of her traditional Thai-style house in Khao Kala, Nakhon Sawan to brush her teeth.

Still sleepy, Nam looked up to the sky and blinked, allowing the first light of day into her eyes. The sky was orange as the sun slowly came up. Nam swept her gaze across the horizon, like she did every day, but something was different.

“It looked like an upside-down wok floating in the sky,” recalled Nam, who was 12 at the time.

“I started to yell for my grandmother to come and see,” she said. But by the time her grandmother came outside, the mysterious entity had moved behind a cloud and disappeared. It was unlike anything Nam had seen before. Paranormal activity: Somjit Raepeth, 56, runs the UFO Khao Kala group. Her father was the first one in their family to make contact with aliens, she says.

OUT OF THIS WORLD

As a medical professional and science lover, 56-year-old Somjit Raepeth doesn’t just believe in things that can’t be proved by fact.

Mrs Somjit was born and raised in Nakhon Sawan where she worked as a nurse at a local hospital.

After a long shift one day in late 1997, Mrs Somjit received a phone call from her father, Cherd Chuensamnuan, a retired army sergeant living in Uthai Thani province.

“Do aliens exist?” he asked her bluntly. Based on her own experience and a lack of any evidence to the contrary, she told him, “no”.

Sgt Cherd was a monk before he joined the army. He loved to meditate and did so every day.

Several weeks later he called his daughter again. He said he could hear an alien in his mind while he was meditating. It said there would be a big disaster that would kill half the world’s population. “They are real,” Sgt Cherd said.

“I won’t believe it until I see it with my own eyes,” she replied.

Mrs Somjit asked her father to send the alien over to her house in Nakhon Sawan, repeating that she’d believe him when she saw it first-hand.

Not long after, the nurse received a phone call from her father while she was working her night shift at the hospital. “They are on their way to see you now,” he said, before hanging up.

Less than five minutes later, Mrs Somjit got a worried phone call from her sister-in-law.

“He is spinning out, please come home,” her sister said, referring to Mrs Somjit’s husband, Charoen Raepeth. Mrs Somjit was confused, but she couldn’t leave her shift until the morning. 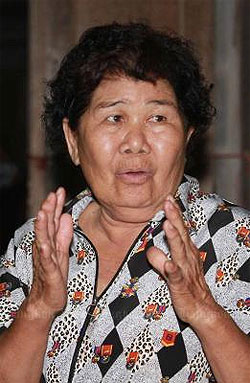 Bright lights: Villager Payung Chuensrinuan, 67, says she saw a flying saucer when she and her nephew were home alone one night.

When she finally arrived home, Mr Charoen explained everything. He said he had lost control of his body and began spinning like a top. He spun out to the front yard of the house and was shocked by what was in the sky.

“I saw a big, round flying object with a bright orange light in the centre and many other smaller lights spinning around it,” Mr Charoen told Spectrum.

Mrs Somjit called her father back and told him to inform the aliens that she was at home waiting for them. Around 8pm, when most houses in the neighbourhood had already turned out their lights, she got the call. “They are on their way again,” he said.

Mrs Somjit and her two other sisters went outside to stand in front of the house. There it was, up in the sky. The sisters looked each other in the face and said: “It is real.”

Having lived in Khao Kala for 47 years, not much surprises 67-year-old Payung Chuensrinuan. She lives at the foot of Hill 145, which is part of the Kala mountain range and named after its height above sea level. The place is a hot spot for sightings of unexplained lights in the sky.

Mrs Prayung had her first encounter with the paranormal long before Mrs Somjit. The incident took place one evening when everyone in her family was out at a local funeral. She was home with her nephew that night.

Sitting on her front porch at 9pm, a large object with a light “as bright as the moon” came flying out of nowhere and hovered down close to her. She didn’t know what it was, so called her nephew to come and see.

“It was quiet so it couldn’t have been a plane and it was covered by blinking lights,” she said. “Then it flew away very fast. I thought I was dreaming.” 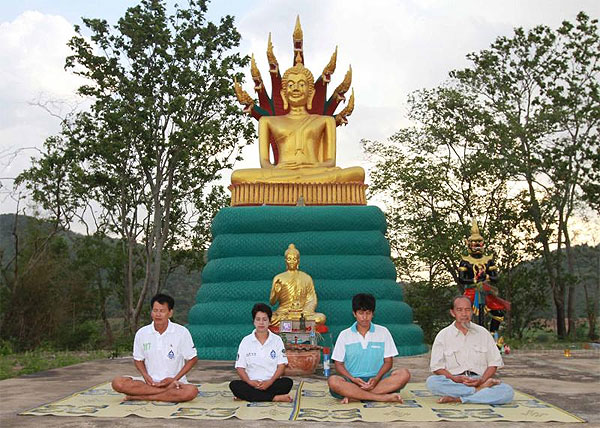 Spooky spot: The UFO group meditate on top of Hill 145. The hill also allegedly hides a wormhole, which they say aliens use as a gateway to travel through dimensions.

Scientist Sawat Tantiphanwadi worked as part of a team designing a spaceship to explore Mercury for Nasa’s Goddard Space Flight Center in 2001.

Mr Sawat is now the senior adviser for the National Science and Technology Development Agency. He believes that life does exist on other planets.

But his theory about what form this life might take is different to the residents of Nakhon Sawan.

He argues that life on other planets is most likely to be tiny bacteria, adding that all life on Earth is based on the element carbon.

“Are there such things as an aliens?” Mr Sawat said. “My first question would be what element are they are based upon? Is it an element that we know of on our periodic table?

“It’s very difficult to determine such answers since we don’t have any samples to test.”

His point is that humans are yet to discover many things in the universe.

“For me aliens could be life in another form, such as an amino acid or protein. Life from other planets could be methane or sulphur-based.”

While many Hollywood movies portray aliens as invaders who come to Earth to harm mankind, the UFO-believers in Khao Kala see things differently.

After Mrs Somjit had her first strange encounter, she began to believe her father. Sgt Cherd told her that meditation was the only means of communicating with the aliens. It took her a year before she was able to make contact.

She started meditating for two and a half hours every day until she could refine her concentration. After getting increasingly better at it, she resigned from her job as a nurse and started a group called UFO Khao Kala alongside her dad.

When her father passed away, Mrs Somjit took over the group and started to train other people to meditate with the purpose of acting as “radios” to receive and translate messages from aliens. Their aim is to warn the human race of impending danger.

Dusadee Prasonsuk, a 43-year-old man from Bangkok, was one of 60 members trained by Mrs Somjit to be part of the group’s first alien squad.

Unlike others in the group, Mr Dusadee had no previous interest in life outside Earth. He only joined because he wanted to see if it was real or just a joke.

Once he shared a paranormal experience with Mrs Somjit, Mr Dusadee became a strong believer. He resigned from his job as a sound engineer to be part of the group full-time.

“Each of us is assigned to do a different task by the aliens,” Mr Dusadee explained. “The main mission is to learn how to deal with the upcoming disaster that will wipe out half the humans in the world. We are getting ready for that day.”

Science, however, does not concur. Humans are currently limited to sending and receiving signals through radio waves, microwaves and light waves, Mr Sawat said.

Scientists have built receivers to try and listen to signals from outer space. If there was intelligent life somewhere else, the theory is that it would be capable of building technology to communicate through these channels, he added.

“For years, scientists have been looking for signs of intelligent life,” Mr Sawat said. “But no person in history has ever discovered that.”

He suggested that people are capable are putting themselves into a dream-like state of consciousness through meditation, where it is difficult to distinguish reality from imagination.

They can see anything they want if they concentrate enough, Mr Sawat said, but there is no way to scientifically prove their claims.

On the top of Hill 145, a large golden Buddha that sits beneath a statue of a seven-headed Naga snake. The group uses the space to practise meditation every so often.

Situated in the middle of the local community and a sugar cane plantation, the hill offers a panoramic view of the city below. The hill also allegedly hides a wormhole, which aliens use as a gateway to travel through dimensions.

Three contingents of group members have been trained in alien meditation, but not everyone can make contact. However, one member says they once recorded the vision of an alien on tape.

“The aliens we contacted are from Pluto and a planet outside of our solar system called Logu Kata Paka Tigong. They have high virtues and morals,” she explained. “The only way to make contact with them is to practise dhamma to the highest levels.”

The group’s claims are outlandish, but many people are drawn to the area to check out the mystery for themselves. Spectrum visited the village next to the hill and almost every house there reported encountering something unexplained.

“I don’t know if UFOs or aliens are real or not, but the group is harmless,” said one villager who declined to be named. "To me, they are just people who meditate together, which is a good thing."

UFO Khao Kala members may claim that disaster is looming, but their warnings have had little traction outside the group.

Smith Dharmasaroja, president of the Foundation of the National Disaster Warning Council, which predicted the 2004 tsunami in Southeast Asia, agreed that more natural disasters could be around the corner.

However, his statement is based on research and statistics.

“Everything the UFO Khao Kala group says is possible,” Mr Smith said. “World War III is also possible. It could cause a lot of harm since so many countries possess nuclear weapons. But no one can predict if or when it will happen.”

He argued that many major natural disasters, such as deadly typhoons, mega earthquakes and tsunamis, are triggered by humans destroying nature.

The earthquake that struck Nepal could be the first sign to be aware of — but not alarmed — about what might happen next in Thailand, Mr Smith said, adding that the fault line running through the country could potentially spark some kind of natural disaster here.

“What I am doing is warning people about disaster by using scientific methods,” Mr Smith said. “But I won’t say anything more for now. People always curse me for giving such warnings.” n