Thailand's tycoons have grown even wealthier despite the lengthy economic slowdown, with agribusiness boss Dhanin Chearavanont regaining the top spot this year, according to Forbes Asia's latest Thailand's 50 Richest List.

Forbes Asia describes them as Teflon Tycoons, as many of them have proved able to overcome the bearish economy that spread across the nation after the military coup on May 22 last year.

With his growing net worth, Mr Charoen ranks second on the 50 Richest List for 2015 at $13 billion, behind the $14.4 billion of Mr Dhanin, the chairman of Charoen Pokphand Group.

Mr Dhanin was outstripped by the Chirathivat family last year, but the growing stock price of insurer Ping An in China helped Mr Dhanin gross an additional $3 billion this year.

His latest development is to team up with a Japanese trading firm, Itochu, using 340 billion baht to acquire a 20% stake in China's Citic Ltd, which owns the biggest brokerage in China and one of the country's largest banking groups.

The Chirathivat family, which operates retail giant Central Group, came in third with its net worth down a bit at $12.3 billion.

Central Group remains upbeat about 2015, with plans calling for a 150-billion-baht investment to add five more branches of Central Department Store in the capital and big cities nationwide, plus 20 branches over the next decade as the Asean Economic Community takes shape.

Among the mere millionaires, Premchai Karnasuta and his sister Nijaporn Charanachitta, representing Ital- Thai Group, re-entered the list at $495 million, ranking 46th, while the Vilailuck family, owner of Samart Corporation, also returned to the fold with $430 million in asset value, good for 49th place. 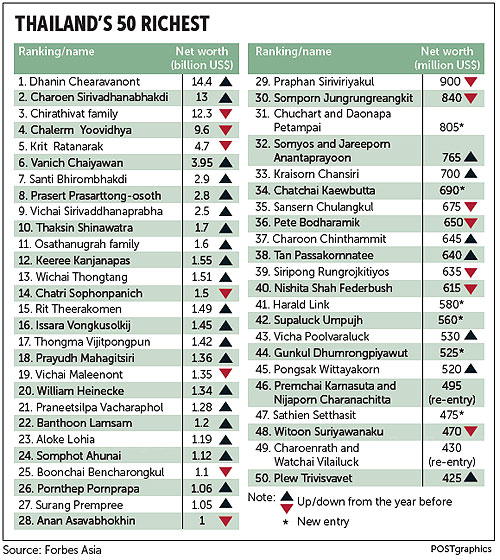