Flying with the rainmaker

As the water crisis intensifies, all hope turns to the sky

The view above the clouds is spectacular, but this is not a leisurely flight. As the drought continues and as the water levels in dams and canals continue to decrease, Wg Cdr Maneepan Robchanachai flies his plane into the clouds, bringing hope to the land below.

Nearly every morning, he pilots the Caravan, a single-engine turboprop, and performs rain-making operations with his team from the Department of Royal Rainmaking and Agricultural Aviation.

"This year the drought is severe. I can tell by just looking," says the pilot, 58. "If we look down while flying, we can see it's more brown than green. The rivers have really run dry."

Wg Cdr Maneepan first became interested in flying while studying at the Royal Thai Air Force Academy. Back in 1994, he was unsure as to whether he wanted to work for the Air Force or the Royal Rainmaking division, but decided to go for agricultural aviation because he knew he would have more opportunity to fly than staying with the army.

"Rainmaking is both art and science. The process on how each chemical reacts to the cloud is based on scientific theories, but it requires imagination and experience from pilots to know which coordinate and which direction to fly," says Wg Cdr Maneepan.

In 1973, under HM the King's initiative, Royal Rainmaking Research and Development Institute was established to study and experiment with the ways to increase rainfall and minimise the impact of drought. Over the years, pilots, scientists and researchers joined the operation as the need to bring rain to the land intensified with the pace of the country's progress. In 1992, the Bureau of the Royal Rainmaking and Agricultural Aviation was established and two years ago, it became a department under the Ministry of Agriculture.

This year, two special centres in Chiang Mai and Nakhon Sawan were opened on July 1 under the instruction of HM the King. Wg Cdr Maneepan is stationed at the latter. These special rain-making centres allow authorities to cut down on the bureaucratic processes in order to speed up rain-making operations to increase rainfall as much as possible.

Every morning Wg Cdr Maneepan, in his green overalls, attends a meeting with meteorological experts to discuss the weather condition and decide whether it is suitable to fly and make rain. Factors affecting the ability to make artificial precipitation include humidity, sunlight, and wind speed. Before setting off, each pilot learns of the location and altitude of the flight, as well as reviews the previous day's result. The officers then earmark which and how much chemical content - sodium chloride, calcium chloride, dry ice and urea - will be brought with the aircraft for the upcoming flights of the day.

"Sometimes people ask whether what we do is really effective. Can we really solve the drought?" says Wg Cdr Maneepan. "The result might not be obvious right away. If it's pouring, all water will be quickly absorbed. But once the soil is more saturated, the new rain will add up into the river."

According to statistics from all centres in the country, in June this year, it rained on 92% of the days that rainmakers flew out.

The Royal Rainmaking Centres operate from March until Oct 15, every day if weather conditions permit. For the rest of the year, for instance during the cool season, the level of humidity is too low to precipitate. During that period, pilots spend time practising, or the planes go for yearly check-ups.

"Even when the country is not hit by a drought, we cannot stop working. We must keep maintaining the water level just like how we always keep filling the water jar so we'll have enough when in need," says Wg Cdr Maneepan.

This morning, the weather clears and the pilots are getting ready, while the staff and volunteers — mostly farmers — help load materials into the aircraft. Wg Cdr Maneepan walks around his Caravan and does a final check-up to ensure that the aircraft is in perfect condition to fly.

On every flight, there is a scientist in the cockpit next to the pilot, an officer to distribute the chemicals and a technician in case of emergency. The cabin floor is modified, with a hole that connects to a tube outside the aircraft for dispersing the 700kg of chemical materials.

"Unlike regular pilots who must fly avoiding clouds, we need to run into it, or our mission is incomplete," Wg Cdr Maneepan explains while heading to cloudy areas. "Royal Rainmaking Pilots also need to know how to fly together with other aircraft as some steps require more than one plane at a time."

At one point, the scientist signals the officer at the back to disperse the chemicals while the pilot keeps flying into cloudy areas.

There are usually three flights per day and each performs different steps in the rain-making process. The first is "agitating", using sodium chloride to stimulate humidity and vapour. The second is "fattening", which uses calcium chloride to stimulate cloud density. The last step is "attacking", with dry ice and ground urea to make moisture condense into liquid. The first step can be skipped if the cloud condition is ready for the second step.

"The rain we make is natural, but what we do is modify the weather by speeding up the process or increase the amount and extent of rainfall," says Wg Cdr Maneepan.

Although there is no fixed schedule for flights, the scientists follow step-by-step instructions before issuing order to pilots.

"Some days we end up not flying, or flying only one flight before the weather changes and we cannot continue. However, we need to be on standby until there is an order confirming the cancellation. Pilots need to be very flexible," explains Wg Cdr Maneepan.

"During the flight, pilots need to be able to make quick decisions. Sometimes the clouds might not turn out as planned. The pilot and the scientist will have to consult on whether to switch the route or slightly change the plan."

Anyone who holds a commercial pilot license can apply to be a Royal Rainmaking Pilot, but having 1,000 hours of flying experience is recommended. Though the knowledge on rain-making is not a requirement when applying for the job, Wg Cdr Maneepan says it would certainly be an advantage.

"Just to be a regular pilot is not sufficient. Most aviation students go for commercial airliners as the pay is better," says Wg Cdr Maneepan. "But for me, I've worked here for 21 years and time has flown. I just love what I do. Every time I touch the control yoke I feel a sense of freedom. What's more is that the result of my mission directly benefits people.

"The best moment is when the rain starts falling when I'm still up in the sky during the mission. It really fulfills me."

For video of this story, visit http://www.bangkokpost.com/vdo 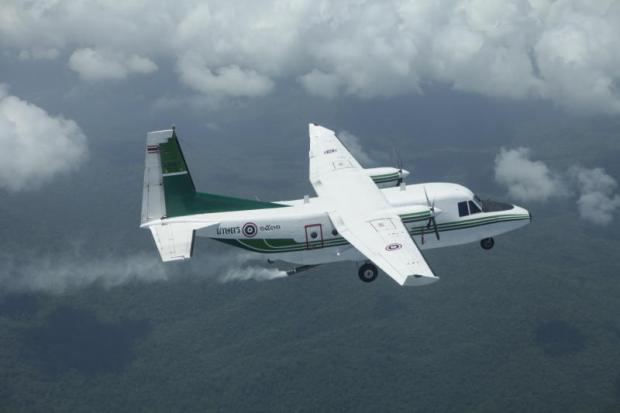 An aircraft from the Department of Royal Rainmaking and Agricultural Aviation during a recent flight in Nakhon Sawan. 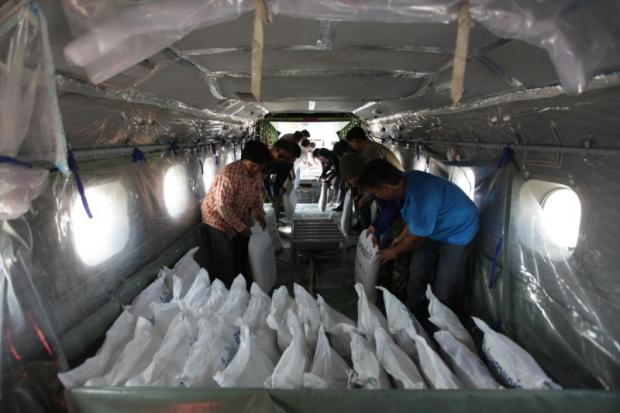