A childhood spent in the dragons’ den
Thailand
Special Report

A childhood spent in the dragons’ den

Sent to Beijing as a Cold War diplomatic offering by her father, Sirin Phathanothai spent more than a decade among the inner circle of China's communist elite

Fond memories: Sirin Phathanothai was sent to Beijing at age eight and spent the bulk of her childhood around key figures in post-revolutionary China. (Photo by Kanyakrit Vongkiatkajorn)

Thailand and China marked 40 years of diplomatic ties earlier this month with typical staid formality. In Bangkok, Prime Minister Prayut Chan-o-cha led a celebration with government officials from both sides at the Shangri-La hotel.

Yet for Sirin Phathanothai, the occasion was personal, conjuring memories of a turbulent and at times traumatic past.

The daughter of a prominent Thai politician, Ms Sirin spent the bulk of her childhood in post-revolutionary Beijing, having been sent there in secret in 1956 at the age of eight as a symbolic offering of trust between the two nations.

Thrust into an alien society crippled by poverty, class conflict and authoritarian rule, the young Ms Sirin became trapped behind the bamboo curtain, a victim of bitter Cold War politics. But over the next 13 years she would gain unprecedented entrance into the elusive world of communist China’s ruling elite.

She would even come to regard Mao Zedong as a “grandfather”.

“I watched Mao swimming and dancing on private occasions many times,” she said. “He would often carry bonbon sweets in his pocket to give to us, which was always good for me because I found the sweets in China were always pretty disgusting.”

The relationship between the young Thai and her carers was complex, imbued with genuine love but later fraught with danger and personal hardship. At the height of Mao’s Cultural Revolution, Ms Sirin was forced to publicly denounce her father and brother, and sever all ties to her family back in Bangkok.

“Even after all he had done — to me and to others — I still have fond memories of Mao.” 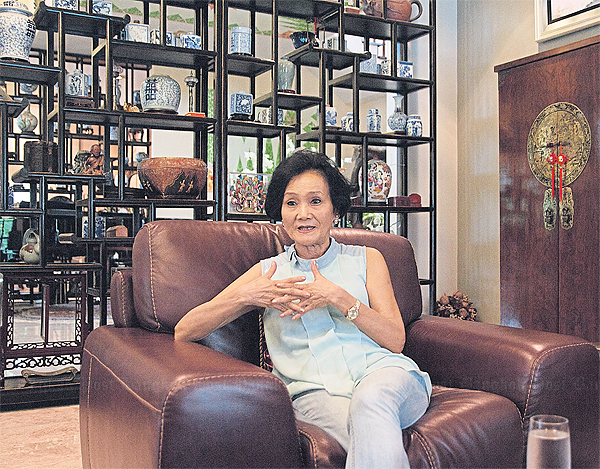 Ms Sirin was born into a very political family. Her father, Sang Phathanothai, was a close adviser to the prime minister in the 1950s, Field Marshal Plaek Phibulsonggram.

It was a period of growing US involvement with Thailand, and any association with communist China was hazardous. Sang, however, felt that a relationship with Beijing was crucial; the US was so many miles away, but China was a growing power on Thailand’s doorstep and the two countries had ancient ties.

Sang’s answer was to establish a secret relationship between the countries. To the eight-year-old Sirin and her 12-year-old brother, Warnwai, he announced: “In the old days, the children of the leaders of small nations were often sent as gifts to the emperor of a big nation to show their goodwill, while learning the habits and thinking of the emperor and the big nation. This is what you will do in China.”

Ms Sirin and her brother were sent to live with premier Zhou Enlai, at the time the second most powerful man in China after Mao. It was intended as an offering to show China that Thailand was committed to building a strong relationship despite its deep ties with the US.

But the relationship was complicated. From the 1950s until as late as the early 1980s, communist insurgencies in Thailand were receiving support from China and Vietnam. During the Cold War, Thais who went to China were likely to be punished. Ties between Bangkok and Beijing were cut in 1949 after the communist takeover.

Common images in the press of Thailand during those times would portray communists with huge, bovine teeth threatening to chew readers up. Ironically, these images were mostly the creations of Sang, whose job running his newspaper was to support Plaek’s pro-American orientation.

This dangerous geopolitical environment meant Ms Sirin and her brother were sent in secret; very few knew about where they had gone. 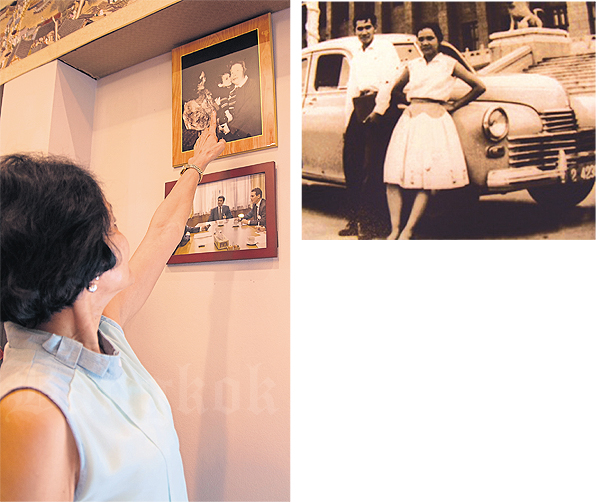 ‘I WAS LUCKY TO BE ALIVE’

Ms Sirin’s current home is an authentic Thai-style house located near Ekamai. On entering, visitors are struck by the number of Chinese historical and cultural artefacts — ceramics, antiques and furniture — that dominate her large sitting room. The walls are lined with historic photographs of her and her brother during their early years in China and a famous one of her with premier Zhou in 1972 before a meeting with then Thai commerce minister Prasit Karnchanawat that helped pave the way for formal diplomatic relations.

Ms Sirin is calm, but her eyes tell of a fascinating story and great knowledge. Her story is an account of the human face of Chinese history, different to anything learned in school.

Our conversation immediately turned to Chairman Mao, the controversial leader responsible for horrendous abuses during the Cultural Revolution, but also seen by some as the man who turned China into the world power it is today.

Ms Sirin, however, has an altogether different and more personal understanding of Mao and his place in China’s history.

“People often describe him as a tyrant, but I had some of the best moments of my life with Mao,” she said. “He really had no barrier when it came to children, and who he was in public was quite different to who he was in private.”

As the professed “daughter” of Zhou and Liao Chengzhi, a Chinese politician heavily involved in foreign affairs, Ms Sirin received more privileged treatment than most during her initial years in China. Although it was not comparable to the life she had been accustomed to in Thailand, the house Ms Sirin and her brother stayed in initially at least had central heating and sufficient food.

But this life of relative privilege would backfire a decade later, when China’s leaders started to turn on one another. Such luxuries were labelled “bourgeois”, “counter-revolutionary”, “reactionary” and against Maoism.

“My friends and I suffered greatly at the hands of Mao and his policies,” Ms Sirin recalled. “Despite our privilege, we were also very much victims of the Cultural Revolution. I was part of the hundreds of thousands that suffered. I was lucky to be alive.

“Despite all this though, I had no hatred for Mao — he still felt like my grandfather.” 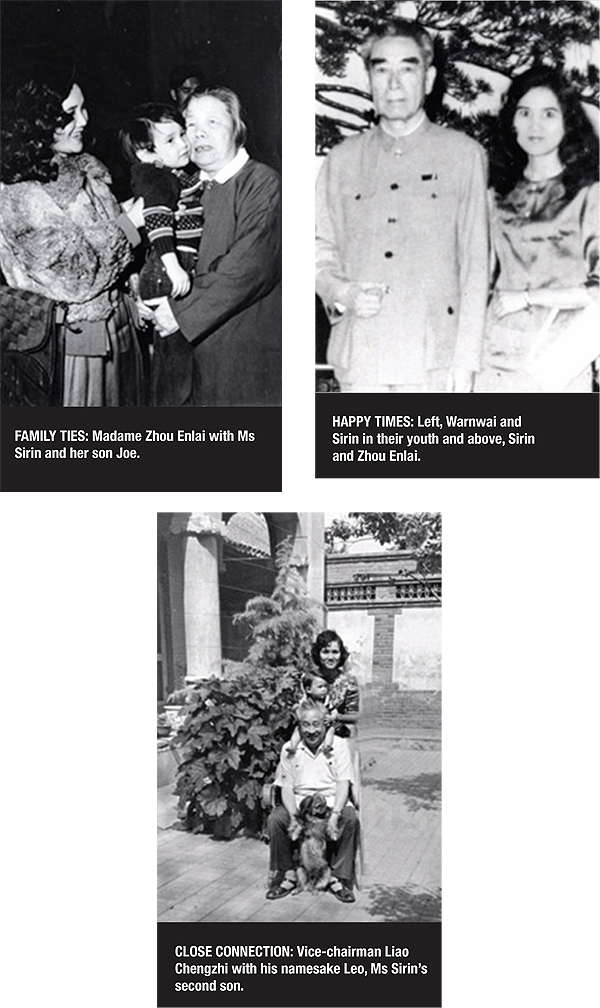 Less than three years after being sent to China, Ms Sirin’s father, Sang, was arrested by the regime of Field Marshal Sarit Thanarat for his pro-Beijing policies and newspaper stories. The news added to a growing sense of isolation that Ms Sirin felt as an outcast trapped in a foreign land.

“I lived in China as a foreigner. At first, I did not like it. I refused to learn the language for a short while, as learning meant staying and I didn’t want to stay, it was just so different,” she said. “But, I knew my father had made it my mission and when he was sent to prison in Thailand, I knew I had no choice. I compromised, I adapted.

“Looking back, it has been a real treasure in my life. Without the gift of this experience in China, I would not have this heritage to pass on to my sons and grandchildren.”

She has passed on that heritage in perhaps the most personal way: Ms Sirin’s first son Joe and second son Leo were named after Zhou and Liao; her grandson is named Jojo, again after Zhou Enlai.

The experience in China proved one of the hardest things she ever endured, but in Ms Sirin’s eyes it was this time that benefited her the most.

Still, she felt like something was missing growing up without parents. “It was hard. But that feeling of missing [my parents] was always replaced by the love I felt from the leaders, who did their best to take care of me, especially Zhou.

“In a way, I can imagine it was sympathy. They felt sorry for us. I was very well accepted into their inner circle. During classes, I would look up every day and see big portraits of the leaders who were so revered. Well, I saw them in the flesh. They accepted me and cared for me. This made me feel so very special, and the feeling of being special was what got me through.”

As the Cultural Revolution escalated and Ms Sirin found herself a target, her environment of safety quickly imploded. Even the premier, Zhou, found himself locked in a battle for political survival; his adopted daughter, artist Sun Weishi, died in 1968 after seven months of torture by Red Guards.

Ms Sirin’s only option was to leave the country with an English academic studying in Beijing who promised to help get her out. He would later become her husband.

“Zhou said to me, ‘Whether you love him or not, just leave. I can no longer guarantee your safety here.’ I never left China an enemy. Leaving took a lot more courage than staying on.”

She left China for London in July 1970. “London presented a completely different world. I had grown up thinking that England was an evil capitalist society,” Ms Sirin said. “Living in China, I had had no contact whatsoever with the outside world.”

When people in England asked about her family, Ms Sirin told them she was an orphan. She was proclaimed by her family to be missing for some time and her father, on hearing that she was alive and in England, came to look for her on many occasions.

“It was hard for me to make contact with them,” Ms Sirin said.

In her memoir, The Dragon’s Pearl, she says: “I couldn’t reconcile the shame of denouncing them with the pain of having once been sent away. A vengeful, angry feeling would well up only to be met with guilt.”

But those feelings dissipated when she finally made contact with her family again. “They made it so simple. They welcomed me into the family’s embrace warmly as if I had never left them,” she said, tears welling in her eyes.

“This was when I felt the strength of my family, a great politician’s family. No one criticised. Everyone accepted what had happened, what I did and what was done to me.”

Returning to Beijing in 1972, Ms Sirin played a critical role in talks between premier Zhou and Prasit, the Thai commerce minister, by serving as the meeting’s only interpreter. This was during the Asian table tennis tournament held in Beijing as part of Zhou’s “ping pong diplomacy” campaign.

As the first official meeting between the two countries since the People’s Republic of China was born, it was an important precursor to the diplomatic relationship that would be formally established several years later.

In her book, Ms Sirin said Zhou pointed to her and Mr Warnwai during the meeting. “They are part of the evidence for the existence of good relations between our two countries,” he said. “They are now a sturdy bridge linking us together.”

Forty years on, that relationship endures.

“Remember, we were friends with China when China had no friends. And now you see the relationship today,” Ms Sirin said.

Smiling, she added: “Father always wanted a good relationship with a big neighbour like China.

“He would be very happy with the relationship we have today.” n