Signs of support: A banner strung up at Ramkhamhaeng University by the San Sang Thong student party announces backing for the military in the wake of the coup.

At Ramkhamhaeng University, the path from student activism to national politics is a well- trodden one. But for some students now enrolled at the open university, there is no irony in supporting the military government and having the chance of one day participating in parliamentary politics themselves.

While seven students from Khon Kaen have become lightning rods for anti-junta sentiment, so too have their counterparts from Ramkhamhaeng come to be seen as apologists for Gen Prayut Chan-o-cha’s government.

“I remember I felt so relieved when Gen Prayut Chan-o-cha announced the coup,” 27-year-old law student Jaturon Chepapai said of watching normal TV transmissions stop and military men appear on his screen last year. “It was one of those moments when you felt like there really was a light at the end of the dark tunnel we were in for so long.”

Ramkhamhaeng is an open university with a history of robust student politics and a track record of producing leaders for both the red and yellow camps. It has more than 60 student clubs — some backed by the major political parties — where members are encouraged to debate and explore different political ideologies.

Being an open university, it has a high number of enrolments from the southern provinces where political sympathies lie with the Democrat Party and the establishment side of Thai politics.

The Network of Students and People for Reform of Thailand (NSPRT), which supported the street rallies to oust the government of former prime minister Yingluck Shinawatra, was born on Ramkhamhaeng University’s campus.

Students stood beside former Democrat party strongman Suthep Thaugsuban and his People’s Democratic Reform Committee in 2013 and 2014 as Bangkok was thrown into turmoil and the Yingluck administration was choked into submission.

A tipping point for many of the Ramkhamhaeng students was the confrontation with red-shirt supporters in November 2013 as they gathered for a political rally at the Rajamangala National Stadium. Now known as the “Rampage at Ramkhamhaeng”, the street fighting — which some analysts believe involved agent provocateurs — left five dead and at least 60 injured.

During the 17-hour ordeal, hundreds of students were left cowering inside the university compound after police refused to come to their aid. One student was shot dead at point-blank range in a soi behind the university. Of the five who died that weekend, three were identified as red shirts. 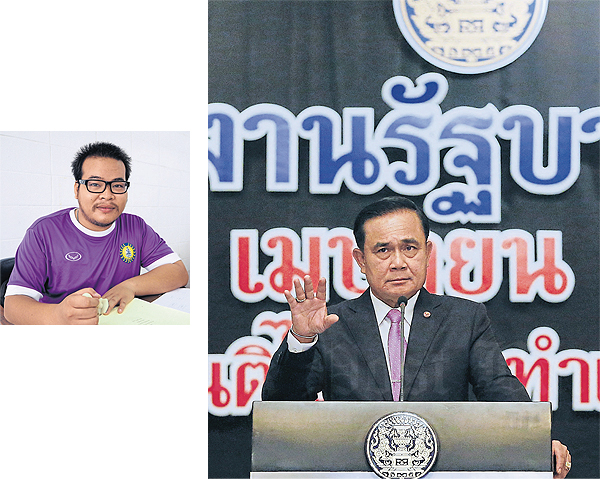 Ranking officer: Prime Minister Prayuth Chan-o-cha has the support of many students, although some are critical of what they say are his failures in several key policy areas.

‘So relieved’: Jaturon Chepapai saw last year’s coup as a ‘light at the end of a dark tunnel’.

Supattra Chaiponrit, 26, is a political science student at Ramkhamhaeng and comes from the southern province of Nakhon Si Thammarat. She said that in 2013 she was studying politics but had no interest in political activism and instead was aiming to secure a job in local government administration.

“I was really angry to see my innocent fellow Ramkhamhaeng students getting killed in this shameful conflict,” Ms Supattra said. “I wasn’t inside the campus when the shooting took place, but I was across the street feeling angry and scared.”

Ms Supattra and other students tried to contact police to get them to come and help the students trapped on the campus, but no help arrived. It was not until the military arrived the following morning that the campus was secured and the students were taken to safety.

Ms Supattra said from that moment she decided to get involved in political affairs at university in an effort to stop similar conflicts in the future. She became a member of the San Sang Thong party, one of the most popular and influential student political groups at Ramkhamhaeng University which has produced a number of prominent Democrat Party politicians.

Ms Supattra said she has never taken part in any protests led by the NSPRT and has a clean record.

Due to a tragic turn of events, she is now student president of the university. San Sang Thong won the party-list election for the presidency, but a 25-year-old law student who was first in line for the job died in a road accident in March, so the position was handed to Ms Supattra.

After seeing the military come to the rescue in November 2013, Ms Supattra felt Gen Prayut was the only one who could lead the country out of the mess it was in.

“No politicians, police, government officials or anyone helped us on that tragic night,” she said. “The only ones who came to rescue us and get us out of the political conflict was the military. I believe in them.”

Reservations: Prakobkit Inthong supports the junta, but fears for the economy.

Unlike Ms Supattra, law student Prakobkit Inthong, 34, is dedicated to securing a career in politics. He is studying for his second degree after graduating in political science. Like Ms Supattra, he is from Nakhon Si Thammarat. Mr Prakobkit joined the San Sang Thong party when he was a freshman and quickly became one of its most active members. Like the anti-coup Dao Din students from Khon Kaen, Mr Prakobkit believes he is fighting for the rights of grassroots people.

“I helped local people in Nakhon Si Thammarat when they suffered from the fall in the price of rubber,” he told Spectrum.

“I also help villagers get their basic right to education where there is no access to it,” he added proudly.

Mr Prakobkit said his biggest grievance against the Yingluck administration was its failure to strongly enforce lese majeste laws during the conflict against those who criticised the monarchy. “This was unacceptable to me,” he said.

In October 2013, Mr Prakobkit became an NSPRT leader during the anti-government rallies and remained in that role until the military coup in May last year.

Despite his support for the anti-Yingluck movement, Mr Prakobkit has received no favours from the military government. After the coup he said he was convicted of treason. He served no prison time, but has been banned from involvement in politics. He also has a criminal record, which he said precludes him from working as a government official.

As bad as the Dao Din group in Khon Kaen think Gen Prayut’s government is, Mr Prakobkit sees the general as the only way out of the political mayhem of recent years.

“When the situation during the protests started to get more violent and way out of control, I secretly wished the military would take over the situation,” Mr Prakobkit said.

“I studied history and I know the military was not that nice to students in the past. But I do believe they are the only ones who will help us get through this.” 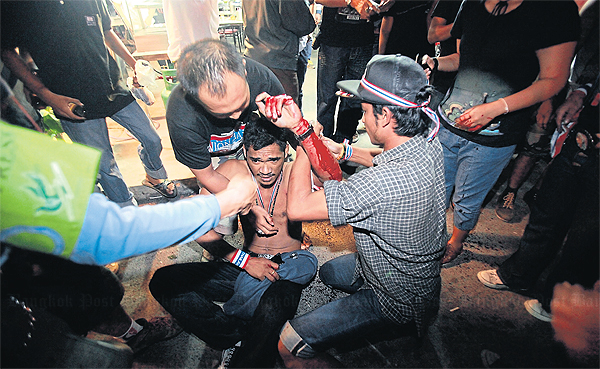 A history of violence: Clashes during an anti-government protest outside Rajamangala Stadium in late 2013 left five people, including one Ramkhamhaeng student, dead and more than 60 people injured.

As much as some Ramkhamhaeng students lionise the military and Gen Prayut’s administration, they also want to see a government eventually emerge from clean elections.

Ms Supattra said while the military government has been doing a great job in maintaining peace and order, they have failed when it comes to developing education.

“I live in a remote area of Nakhon Si Thammarat and I see many children in my area who have no proper education,” Ms Suppatra said.

“Many kids in my area drop out of school at a young age and become drug addicts or thieves. Education is the key to developing a child to be the future of our country.”

Mr Prakobkit said although he admires the military government, it has failed on the economic front.

“Our country seems a lot more peaceful,” he said. “People don’t fight as much as before. However, I think we are getting poorer and our economic situation is getting to a crisis point.

“With all respect to Gen Prayut, I think he should consider changing the economic team before our country goes bankrupt.”

Law student Mr Jaturon, who cheered on the coup-makers, said so far talk of political reform before elections has remained a pipe dream.

“I really do want reform before an election. After all, this is the whole reason that Gen Prayut took over from the previous government,” he said. “So far, I don’t see anyone taking this seriously. My biggest fear is that the situation will go back to what it was if there is no reform. Things will repeat themselves over and over again. What we fought for would be useless and a waste of time.”

Divers expected to search for more bodies after finding almost 300 bones earlier in a pond at the Bangkok home of a man charged with murdering a woman and concealing her corpse.