Down South, fishing communities build reefs to protect their traditional way of life

At the end of another day of hard work, the fisher folk of Yaring in Pattani gather their kohlae — those brightly-painted boats so symbolic of the deep southern border provinces — to play environmentalist. 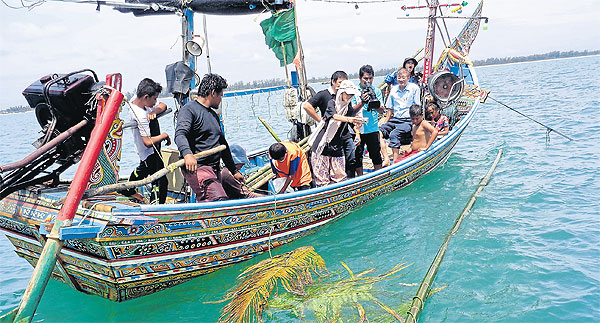 Local fisher folk and researchers watch as the sang is dropped into the sea off Talogapo village in Pattani. The artificial reef will then be put up right with a sandbag to weigh it down.

Acutely aware of the need to protect the surrounding ecological system, the fisher folk have arrived in Talogapo village to make sang, artificial coral reefs inspired by local wisdom that is passed down through the generations.

Motivated to preserve and rehabilitate the biodiversity of marine life in their local waters, the native fishermen of Pattani are creating man-made reefs that they dump into the sea to provide habitats for aquatic animals.

Muhama Sukree Masaning, chairman of the Pattani Small-Scale Fisher Network Association (PSSFA), said the artificial reef project was launched five months ago after a meeting between the PSSFA and regional fishermen on ways to protect and nurture the sea's ecology which has provided them with a living for many generations.

And so last month, the fishermen, housewives and young people gathered in Talogapo.

Children were keen to be part of the action. The man-made reefs are simple, using locally-available materials which are also biodegradable. Coconut leaves are strung to long bamboo poles which are weighed down by sandbags.

After the sangs are assembled, they are loaded on the kohlae boats and dumped in areas close to shore to provide underwater shelter for marine life. 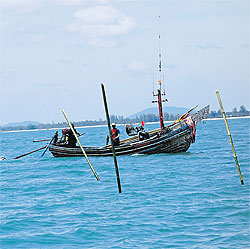 “The aromatic coconut leaves attract marine animals to the makeshift reefs," said Mr Muhama. "After dropping them into the sea for about five days, the leaves emit mucilage which feeds the plankton, food for the young aquatic animals. The larger sea creatures including shell fish are drawn to the reefs to eat the small fish and marine animals too.”

He said the man-made reefs are first thrown into the water about three kilometres from shore. Next, the fishermen manoeuvre the poles and plant them deep into the sea bed so that they stand upright in the water. After being secured by heavy sandbags, the thick, strong coconut leaves wave upright above and below the water, providing a tempting shelter for aquatic life.

"The villagers know exactly which areas in the local waters are suitable for installing the reefs, such as where aquatic animals are mostly likely to gather and where the reefs will hold securely to the sea bed so they are not swept away by strong undercurrents," Mr Muhama said.

He explained the bamboo structures and coconut leaves can last under water for between three to six months before starting to decay. Then, the residents in their fishing boats will head out to where the reefs were left and repair the sangs using branches of pine and the grey mangrove trees.

During the monsoon season when undercurrents are strong, the sandbags can be susceptible to tearing under constant battering and the sand will be washed out of them. But experience shows the empty bags mostly get caught up on the bamboo stakes so they do not drift away and end up as floating garbage.

Whole artificial reefs can be uprooted by the force of the tide and the remnants washed up on shore. In that case, the villagers recover usable pieces and set up stands for drying fish.

"These artificial reefs are common property. However, those who did not participate in making the reefs are not allowed to go fishing in areas where the reefs are set up," Mr Muhama said.

The sang not only provide a place to nurture marine life, they also help local fishing folk and villagers to develop bonds among the various communities, especially during the construction of the artificial reefs when many people who barely know each other can get together.

Piya Kitthavorn, deputy secretary-general of the Southern Border Provinces Administrative Centre (SBPAC) who has come on board the project to install the artificial reefs, said the concept was funded by the SBPAC and agencies in EU countries.

"Villagers are familiar with the local geography so they can pinpoint offshore areas most suitable for placing the reefs. The activity also helps to train young people to be mindful of marine conservation practices because everyone has a shared responsibility to protect the sea," he said.

Mr Piya suggested sang-making should be organised annually as it affects the livelihood of local people in the southern provinces, adding the Department of Fisheries and other public sector agencies should participate in the project as well.

This year, the SBPAC allocated funds of more than 100,000 baht to procure equipment and materials to make the artificial reefs in Talogapo and Tanyongpao villages in Nong Chik district. The money is enough to produce up to 1,000 tonnes of sangs.

The project is worthwhile as it is part of the people's way of life. The locals give back to the sea in return for the marine bounty they have been blessed with, Mr Piya said, adding the sangs can help guarantee them food security for generations to come.

from far left The sangs are assembled using bamboo poles and coconut leaves before they are loaded onto a fishing boat and installed in the sea as artificial reefs. The village youngsters are educated about making the sangs. photos by Supaporn Asadamongkoln 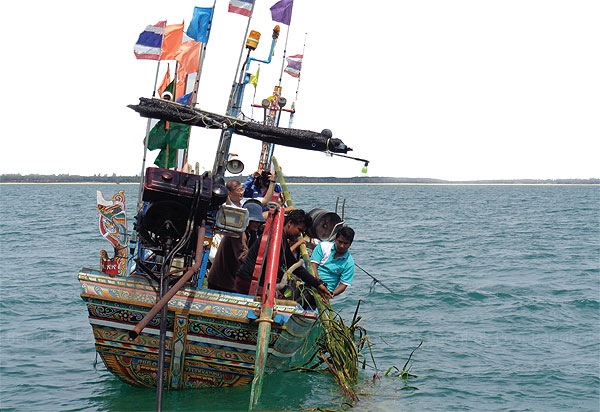 Making and installing the sangs require community efforts. Local residents are taught to cherish unity and forge harmony among them.