A general view of heavy traffic during a downpour in Quezon city, east of Manila, Philippines, on Aug. 20. Traffic in the metropolis usually moves at 10-15 kilometres per hour during non-peak hours and grinds to a halt during rush hours or when it rains hard. (AFP photo)

MANILA — The archbishop of Manila took to the airwaves to decry the state of traffic and public transport in the Philippine capital.

"Our traffic is a reflection of our behaviour," Cardinal Tagle said in an interview with the Catholic-run radio station Radio Veritas late Wednesday. "Are we hot-headed? Or are we competitive and trying to be ahead of the others?"

Either way, more government intervention was needed to "fix our public-transport system; the trains, the buses, because if these are working efficiently maybe private car owners would no longer bring their vehicles," he said.

The release of new vehicles should also be regulated, he said.

"Be realistic, if we know that a particular road could only accommodate 5,000 cars yet there would be 50,000 cars battling for limited space, then how will these vehicles move?" he said.

The German Press Agency reported that the metropolis usually moves at 10-15 kilometres per hour during non-peak hours and grinds to a halt during rush hours or when it rains hard.

The congestion is caused by the number of vehicles on the roads, widespread disregard for the highway code, and rampant roadworks, according to city authorities.

"We were trapped for over an hour and we were rushing to another engagement. I said to myself: 'we cannot take this anymore,'" the 83-year-old retired Manila cardinal told AFP on Tuesday. 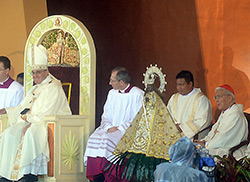 Retired Cardinal Gaudencio Rosales (right celebrates mass with Pope Francis (left) during the Pope's visit to the Philippines Jan 15. Cardinal Rosales took over a typhoon-lashed Philippine highway and single-handedly untangled a mammoth traffic jam the likes of which have become a daily misery for his countrymen, he told AFP on Aug 25. (AFP photo)

With no traffic policemen in sight amid the onslaught of Typhoon Goni, Cardinal Rosales said he zipped up his raincoat and walked nearly a kilometre to find out what was causing the 1.6-kilometre-long snarl.

"We're all in a hurry," he said to the erring motorists, after discovering six cars fighting over two lanes in Santo Tomas town on Manila's outskirts.

As his boots filled up with rainwater, the hooded old man used hand signals to force the vehicles to back up, freeing up the jam.

About 80% of the Philippines' 100 million strong population are Roman Catholic and considered among the world's most devout.

The rain later let up to reveal a giant crucifix peeking out of his jacket. The chastened motorists then got out of their vehicles to kiss his ring.

"They were very apologetic," Rosales said of the culprits.