US ‘Big Sugar’ fighting to protect a sweet deal from TPP

A sign warning drivers to watch for slow vehicles stands at a plantation near Ayr, Queensland, Australia, on Aug 9. Global sugar prices reached a six-year low in August as rising production levels and exports from countries like Brazil and India has put pressure on prices. (Bloomberg photo)

A sweet deal for American sugar farmers is compounding delays in a proposed trade agreement affecting 40% of the world’s economy.

The commodity has become a sticky subject in talks over the Trans-Pacific Partnership, potentially the biggest trade deal in history and a key goal of the Obama administration. TPP, as it's known, would link a dozen countries and, its proponents say, make it easier for US companies to sell goods around the world.

But the trade deal may also weaken protections for the sugar industry dating back to the Great Depression should negotiators heed the calls of Australia and other nations for the US to loosen a quota system that protects domestic suppliers while making the product more expensive for consumers. As they have for decades, sugar lobbyists are fighting to keep it that way by using their clout with lawmakers.

In Washington, that means one thing: money. Sugar accounts for a small fraction of US farm output, but the industry contributes more to congressional campaign coffers than any other commodity producer. Between 2007 and 2014, growers donated $18.5 million, according to the Center for Responsive Politics.

"The sugar lobby is one of the strongest in the country," said James Cassidy, global head of sugar derivatives at Societe Generale in New York.

Sugar isn't the only thing snarling the trade talks, which broke off in July and are expected to resume as early as September. Other issues include dairy products, cars and intellectual property rights.

But sugar occupies a special place in US politics. The commodity has been a source of controversy since before the American Revolution. Import protections have artificially inflated domestic costs for decades.

Nowhere is the industry's clout felt more than in Florida, base of the nation's most powerful sugar barons, the Fanjul brothers. Between them, the Fanjuls -- Alfonso, Jose, Alexander and Andres -- have long-standing ties to at least three US presidential candidates: Senator Marco Rubio, Republican of Florida; Florida governor Jeb Bush, another Republican; and Hillary Rodham Clinton, the Democratic frontrunner. 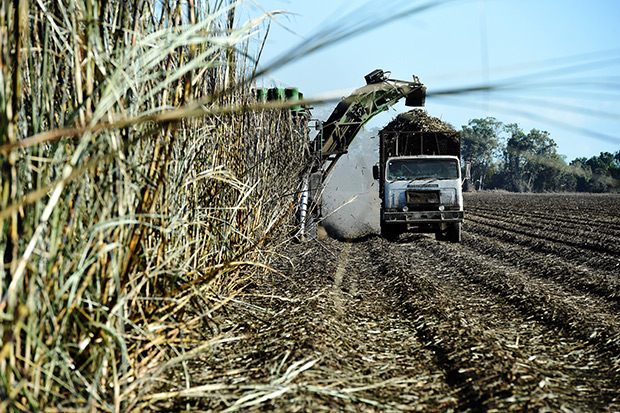 A harvester loads a truck with sugarcane at a plantation near Ayr, Queensland, Australia, on Aug 9. Australia is one of the countries pushing the US to drop its protectionist sugar programme as talks on the TPP trade deal proceed. (Bloomberg photo)

Mr Rubio recently defended the US sugar programme at an event organised by major Republican donors Charles and David Koch. Mr Bush wants to phase it out, according to a spokesman. The Clinton campaign didn't respond to requests for comment.

Major sugar-users like PepsiCo Inc and Hershey Co have complained about the sugar programme for years, saying it needlessly raises costs, both for them and for consumers. While a global production surplus has driven world sugar prices to their lowest levels since 2008, US prices are much higher than elsewhere. A US pound (0.45kg) of domestic sugar fetched 24.45 cents yesterday on Ice Futures US, compared with 10.94 cents for a global counterpart. This week, the gap between the two was the widest since November 2011.

"The issue of sugar is one that is sensitive," US trade representative Michael Froman told Bloomberg this week. "We made clear that we won't do anything that undermines our sugar programme, but just as we are asking every other country to put everything on the table, we are also talking about what other steps we can take on the sugar area as well."

Other sugar producers, led by Australia, say the US must roll back support for its sugar industry for a TPP deal to get done. Other countries, notably Indonesia and Japan, also regulate the sugar trade.

The National Foreign Trade Council, a pro-trade group that includes Coca-Cola Co and Wal-Mart Stores Inc, and the Sweetener Users Association, a collection of sugar-buyers, is holding a conference call with Australian sugar producers Monday to promote expanded US access for foreign suppliers.

The American Sugar Alliance, the industry's lobbying group, says other countries are making unreasonable demands, particularly given that the US has already made some concessions. The TPP talks haven't been held up by sugar, according to the group, which spent almost $2.2 million lobbying last year.

"Sugar clearly was not a sticking point," the group said in a statement.

Representative Collin Peterson of Minnesota, the top Democratic lawmaker on the House agriculture committee and the leading recipient of sugar donations in his party, said international complaints about US sugar are nothing new.

"Australia has wanted the US to open up its market forever," Mr Peterson said. "I don't think anything will make them happy."

Bangkok's twice-postponed annual auto show opened to the public on Wednesday in the country's first large-scale event since coronavirus restrictions eased, with nearly all attendees wearing masks and face shields.

More than 1.9 million people signed up for the “We travel together” tourism stimulus package on the first day of registration, a scheme devised to promote local travel as the industry has been battered by the pandemic.

The opposition has lambasted the government after foreign nationals were allowed to enter Thailand without enforced quarantine and claims there might have been other, unreported cases of arrivals slipping through the net.