Thai by blood, not by birth
Thailand
Special Report

Thai by blood, not by birth

A community of Siamese Malaysians has been thriving over the border for more than 100 years, and they refuse to let go of their roots.

Visit Wat Phikulthong in Malaysia’s Kelantan state on any given Friday, and you will see dozens of students in pink polo shirts and black sweatpants reciting the letters of the Thai alphabet.

On the day of Spectrum’s visit, a Grade 1 class of Malaysian-born pupils was studying a new letter. “Can anyone give me an example of a word using the letter wor waen?” asked Darin Nicaren Ap Phin, a 30-year-old volunteer teacher.

A boy went up to the front of class and wrote “chaow-na” on the white board. Ms Darin told the rest of the students to repeat the word, which translates to “farmer” in English.

Tuala Zinna is a Grade 3 student at SJKC Yuk Tze School, which she describes as a “Chinese school”. On weekends, she studies Buddhist teachings at the temple, where she is also a pupil in the primary level Thai class.

“My parents sent me to the temple,” Tuala explained in fluent Thai. Asked to write her name, she hesitated. “My Thai writing is not good,” she said apologetically.

Eight-year-old Nattha Sirirak studies at Sekolah Kebangsaan Berangan School on weekdays. “I study at an Indian school during the week and also learn Thai at the temple. It's more fun to study here. We are allowed to go out and play,” she said. 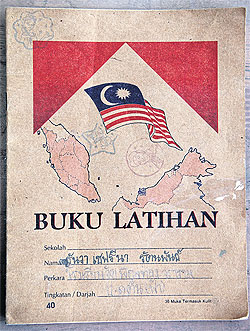 Legacy: Generations of Siamese Malaysians have been learning Thai since the 1900s.

The students at Wat Phikulthong are Siamese Malaysians, or Malaysians with Thai heritage. From Monday to Friday, they blend in perfectly with Malaysian society. But on weekends, they go to the temple to learn about the culture of their ancestors.

Like most Thais, these Malaysians observe the Theravada school of Buddhism.

Siri Neng Buah, a retired government official who volunteers at the temple, teaches the most advanced Thai class. “If we don’t preserve our culture and identity, then our minority will be swallowed by the mainstream,” he said.

CLOSE TO THEIR ROOTS

Make no mistake; these pupils and their families are Malaysian citizens through and through. “We are Malaysian nationals,” Ea Chuan, chairman of the Thai Language, Religion and Culture Centre at the Kelantan Siamese Temple, said in Thai.

But the community also feels closely connected to their Thai roots and the heritage that has been passed on from one generation to another.

“I have Thai blood. Every time I cross the border to Sungai Kolok, I get a ‘Thai’ feeling. It’s like when you see the Thai flag waving, or see monks walking in the morning; I feel like I am in my motherland," he said.

“I have a habit of greeting people with a wai, regardless of who they are. Now, I am proud to see my students wai to greet me.”

Asked when his ancestors became Malaysians, Mr Chuan said, “I cannot recall. As far as I can remember, my grandparents were born here.”

Historians can trace the origins of Siamese Malaysians to the early 1900s. Their ancestors were living in the Malaysian states that belonged to Siam until the Anglo-Siamese Treaty. The 1909 agreement transferred Siamese rights over the states of Kelantan, Trengganu, Kedah, Perlis and their adjacent islands to the British government. The agreement defined the Malaysian and Thai boundaries that we know today.

After Malaysian independence, Mr Chuan was told his ancestors were asked if they wanted to move to a new location in Thailand or remain in Kelantan.

“My ancestors did not want to move because they already had property here. But they still considered themselves Siamese and passed on the tradition of speaking Thai and observing Buddhism,” he said.

Kelantan is separated from the southern Thai province of Narathiwat by the Golok River. Despite living across the water from one another, residents on both sides share many aspects of culture and heritage.

People can easily cross the border in a small boat, costing 10 baht per trip at Tak Bai district, or they can pass through the larger immigration checkpoint in Sungai Kolok district.

HEART OF THE COMMUNITY

Buddhist temples in the town of Tumpat, Kelantan are not only the venue for religious gatherings, but also community centres where Siamese Malaysians get together to study and socialise.

Wat Phothivihan is one of the most revered Buddhist temples in Malaysia. On the day of Spectrum’s visit, a bus full of Siamese Malaysians from Kedah had come to pay respect to the 40-metre-long reclining Buddha statue at the temple. Sino-Thai influences are clear in the architecture of the building, which also houses large statues of well-known Chinese priests and Thai monks.

Wat Phothivihan has had a long line of Chinese-Malay abbots, but the monks there also speak Thai to communicate Buddhist teachings, which are in Pali or Sanskrit.

Soon Kok Wat, the Chinese-Malay abbot of Wat Phothivihan, said he learned Thai after he was ordained.

“It is easier to disseminate Buddhist teachings in Thai,” the 47-year-old monk said. 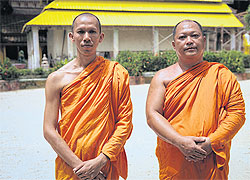 The temple also offers weekend Thai language class to students. Ong Hock Choon, a Siamese Malaysian monk, said the temple is a focal point for locals during festivals such as Songkran and Loy Kratong. “We celebrate with temple fairs, like in Thailand,” he said.

The Thai influence on Siamese Malaysians does not stop at language and religion. Mr Chuan likes watching Thai soap operas, which people in Kelantan get through satellite TV channels.

“Whenever there are competitions involving Thai athletes, such as football matches, I always root for the Thai team,” he said. “But it is difficult when Thailand and Malaysia compete against each other. My son once asked me which side I supported. I told him ‘Malaysia’, but my heart still wants Thailand to win.”

A calendar with a photo of His Majesty the King hangs in Mr Chuan’s living room. “I can feel a connection with His Majesty. He works hard for the people,” Mr Chuan said, adding that lots of Siamese Malaysians feel the same. “His image is in many houses around here. Some of the old houses also have an old image of King Rama VIII.”

Mr Chuan’s neighbourhood looks different from other villages in Kelantan because there are dogs ambling around the street. Where Muslims shun the animals, Siamese Malaysians like to keep dogs as pets and to guard against burglars.

“You cannot find dogs walking around anywhere except for in the Siamese communities,” he said. “We don’t have burglars in this area because of our pet dogs.”

According to a 2007 report by the Thailand Research Fund, there were 13,000 Siamese Malaysians in Kelantan at the time, with 6,500 living in Tumpat. The report said it was unclear exactly when they settled there, but most were from families living in the area before the annex of the northern Malaysian states in 1909.

The multicultural mix of Indian, Malay and Chinese makes it easy for those with Thai heritage to thrive in Malaysia. Siamese Malaysians are split into two groups — Buddhists and Muslims. 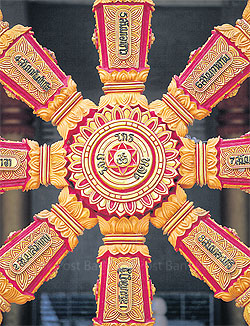 Muslims with Thai ancestry tend to blend in with the local Malays, but the cultural identity of the Buddhists is more noticeable in the Muslim-majority country, according to Madya Pim Chau Dam, president of the Malaysian Siamese Association in Kelantan.

Mr Pim said Siamese Malaysians have a peaceful history in Malaysia. “We are a small group of easy-going people. We have no conflicts with anyone,” said Mr Pim, who is a medical science professor at the Universiti Sains Malaysia.

Despite this, Mr Pim said Siamese Malaysians enjoy more privileges than other ethnic groups, such as Indians and Chinese, when it comes to government regulations and support.

He noted Siamese Malaysians are ethnically different from Thais who migrated to Malaysia later on.

“The Siamese here are considered part of the Bumiputra ethnic group, because we settled in Malaysia before British colonisation changed the border between Thailand and Malaysia.” The word Bumiputra is the Malaysian term for the Malay race. “We did not move but the border did,” Mr Pim said. “If you ask me whether I am a Thai or a Malaysian, I will say I am a Thai person living in Malaysia.”

Siamese Malaysians are active in politics in the north of Malaysia and beyond. Kelantan has been ruled by the Islamic Party of Malaysia (PAS) since 1990. But Siamese Malays usually vote for the ruling party in the national government — the United Malays National Organisation (UMNO). Tunku Abdul Rahman, the first Malaysian Prime Minister after independence in 1957, was Siamese Malaysian.

“We can observe Buddhism under the PAS state government, which is known to be very religious. But the Siamese generally favour the national government party,” said Mr Chuan. Despite PAS’ political dominance in Kelantan, UMNO politicians won high numbers of votes in Siamese Malaysian communities, he said.

Studying Thai language and heritage offers more than just social and cultural benefits to the students at temples in Tumpat. “More Siamese Malaysians are interested in studying Thai because of the Asean Economic Community," Mr Pim said. "Additional language skills provide them with better job opportunities."

Mr Pim’s son recently gained a good job at a multinational company in Kuala Lumpur. “My child beat the other candidate because he can speak Thai,” he said.

The Malaysian Siamese Association in Kelantan has been working with similar organisations in other states to preserve Thai heritage through joint activities, including more language lessons and cultural events at Buddhist temples.

The association has also received support from temples in Thailand. For example, the Thai language curriculum used in Kelantan was designed by the Prawichianmolee Foundation, which is run by Prawichianmolee, the abbot of Chai Mongkol Temple in Songkhla.

The association collects a small fee from parents who send their students to weekend classes at the temples. It only costs 200 baht each month, but is meant to create a sense of commitment among Siamese Malaysian families.

“I received this legacy myself, and now I have to keep Buddhism and the Thai language alive,” Mr Pim said. “If we lost those things, our Thai identity would disappear, and we’d be left with no more than our names.” 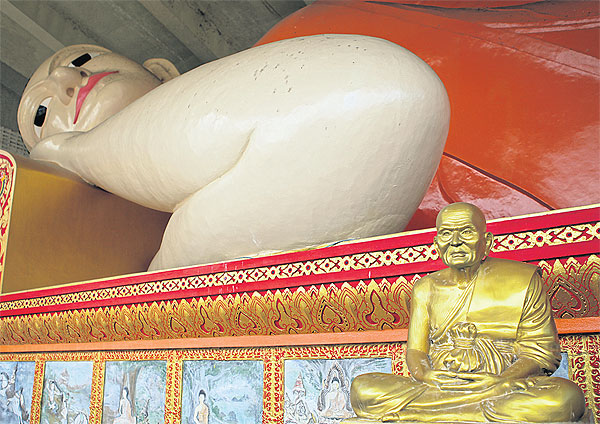 Worldly ties: Siamese Malaysians from around the country flock to visit the 40-metre reclining Buddha at Wat Phothivihan, where the monks speak Thai. 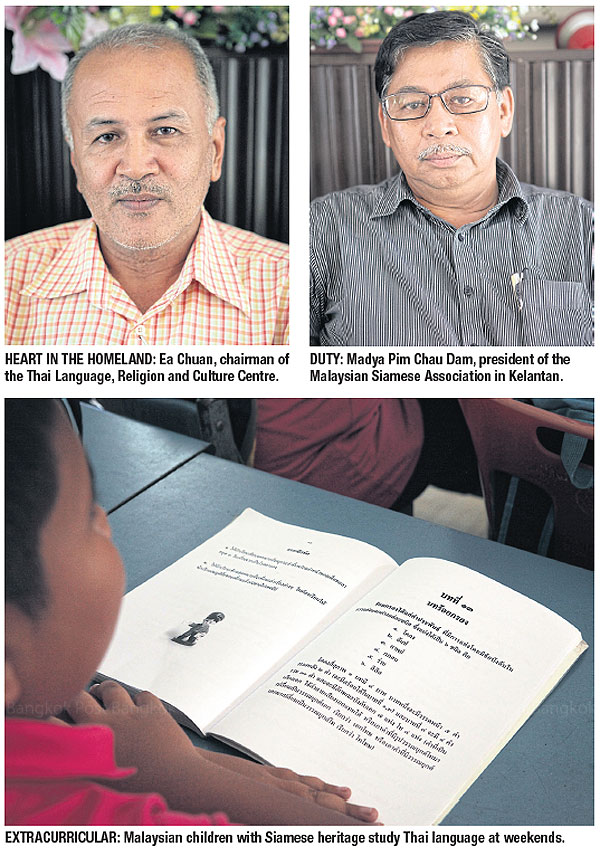 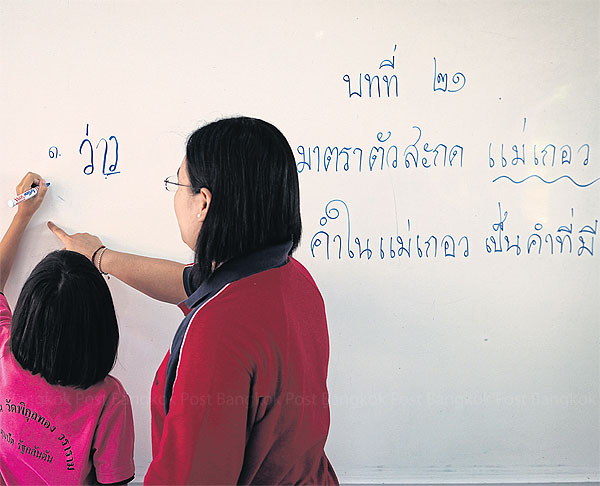 For a video report, visit www.bangkokpost.co.th.