Christians are a shrinking minority in the southern provinces, but they're staying true to their beliefs despite violent divisions in the region.

Every Sunday morning, a community of Christians in Yala province congregate at St Andrew’s Catholic Church to attend mass. 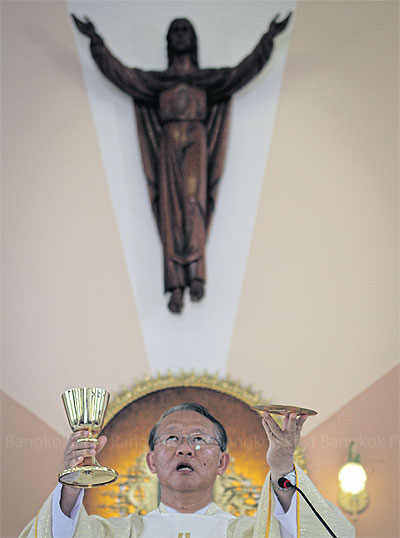 Trailblazer: Father Suksan became the first Thai priest in charge of Yala, Pattani and Narathiwat provinces when he took over the post in 2009.

Tall stained-glass windows depict the Holy Trinity and a large statue of Jesus hangs above the altar, but the church draws on classic Thai architectural style. A Catholic nun plays the organ while about 30 Christians sing Blessed Be God in unison.

Suksan Chaopaknam, the parish priest, steps up to the pulpit. Preaching about peace and hope, the 55-year-old explains how the Jews in ancient Egypt never gave up. “Peace comes at its own pace, at the right time, in line with God’s will,” he said.

After the sermon, the congregation lines up for holy communion. Dressed in white vestment robes, Father Suksan distributes bread from a chalice, quietly blessing recipients.

The atmosphere is modest and subdued, but the Christians exude strong faith. Some close their eyes as they kneel on the wooden pews. An old woman counts her rosary beads silently.

“God teaches us to love others as you love your own,” said Varaporn Suwanwong, a 53-year-old Catholic, who attends mass with her grown-up son and grandchildren every Sunday. “Christians are a minority here, but that’s alright.”

In a region deeply divided by violent insurgency, Christians in the deep South form a close-knit group, dwarfed by local Muslim and Buddhist communities.

“But we are strong,” said Father Suksan, parish priest for Yala, Pattani and Narathiwat.

Originally from Samut Prakan, Father Suksan became the first Thai priest in charge of the three southern provinces when he took over the post in 2009. He is the eighth priest to serve the area since the first in modern history arrived in 1963.

Catholics make up a tiny proportion of residents in the Muslim-majority region. An official in Pattani said 86% of people in the province are Muslims, while more than 13% are Buddhists. Christians and others account for just 0.05%. 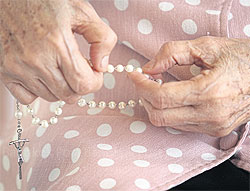 According to Father Suksan, a survey conducted several years ago estimated there were 7,000 Christians in the five southern provinces. But the number could have decreased since then, he said.

On the day of Spectrum’s visit, the priest presided over mass in Yala at 9am, before a 40-minute drive in his pickup to Pattani for an 11am service at Charoen Si Sueksa School. He was scheduled to return to Yala again for an evening mass at St Andrew’s, which is located next to Mana Suksa Catholic Primary School.

In addition to the two main churches in the centre of Yala and Pattani, Christian ceremonies are also performed at smaller village venues. During certain Christian festivals, Father Suksan will “criss-cross the region to preside over seven masses in one day”.

Chaicharn Triuppatham, who owns the biggest fabric shop in Yala, estimates there are about 200 Catholics in the province. Mr Charnchai inherited the faith from his ancestors, who were Chinese immigrants.

Catholic missionaries from Europe brought the religion to China in the 13th century, and were recorded in Thailand not long after, during the Ayutthaya period.

A crucifix stands on top of Mr Charnchai’s four-storey shophouse in the centre of Yala, and he attributes his business success to God’s blessings.

Asked if his display of religious belief has ever affected business, he said, “My customers come from every religion. They know I am Catholic. We have no problem with anyone.”

Christians in the area are less involved in community events than local Muslims and Buddhists, partly because their religious schedule is different. Christians cannot attend functions on Sundays, because the day is set aside for church, while Muslim schools have Friday and Saturdays off.

Mr Charnchai said Christians are content with that. “We live our lives under the love of God,” he said. “We just want to live peacefully and harmoniously.”

The main Catholic church in Pattani was built next to Charoen Si Sueksa Catholic School, which teaches pupils up to secondary level. One of the school’s buildings is named after King Baudouin of Belgium. It was built in 1994 under Father Roosens Gustav, a respected Belgian Catholic who was the parish priest there from 1990-2009. A statue of Mary and the baby Jesus welcomes visitors in front of the school yard. 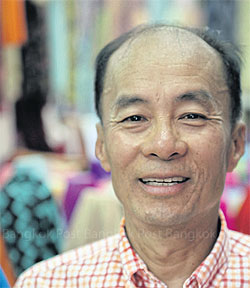 About 60 Catholics attended mass at Charoen Si Sueksa the day Spectrum visited. Most came with their family and mingled with others before the service, bringing snacks and drinks to share among themselves.

Sunan Chareon, a 65-year-old housewife, came with six members of her family, including her children and grandchildren. She said she converted to Catholicism more than 40 years ago, before moving to Pattani.

Ms Sunan’s family used to work in the fishing industry in Rayong. In the 1970s, the Thai government encouraged fishermen in Rayong and other provinces to move to Pattani as part of an attempt to promote diversity along the Thai-Malaysian border. Her family joined other Christian Thais in moving south to explore new business opportunities.

“The competition among fishermen in Rayong had become very intense at the time,” Ms Sunan said.

Before that, Catholics were already flourishing in the southern provinces, albeit in small numbers. The gold rush in 1923 prompted a number of Chinese Christians to move from Malaysia to Sukhirin district in Narathiwat. In 1935, Thailand’s central Catholic office sent two European priests to survey Christian communities living along the train route from Prachuap Khiri Khan to Narathiwat.

Yala then became the centre of a Catholic mission to the southern border provinces after a railway connected Hat Yai in Yala to Sungai Kolok in Narathiwat. In 1963, Father Hector Frigerio moved to Yala to become the first parish Catholic priest for the deep South.

More Chinese migrants moved to the area after the railways were constructed, while Thais continued to migrate to the South from other provinces. “Many of the bibles in those days were in Chinese,” Father Suksan said.

Catholic churches sprang up in numerous communities, taking over old schools and disseminating religion through education.

“Christians want their children to study in Catholic schools to preserve the religion. Our primary goal was to educate our Christian children first and foremost,” he said.

Later, churches were established in small communities. In Narathiwat, places of worship were set up in Sukhirin, Rueso and Tanyong Mat. 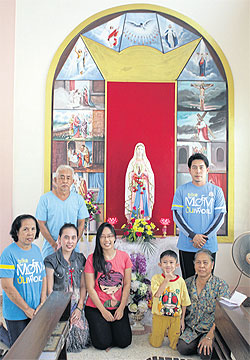 Family affair: Up to 60 Catholics attend mass at Charoen Si Sueksa Church in Pattani on Sundays.

But the rekindling of the southern insurgency in 2004, with thousands of Buddhists and Muslims killed in the years since, put a stop to the expansion of Christianity in the region.

“The number of Christians has decreased as the situation has worsened, with many parents taking their children to study elsewhere such as Hat Yai or Bangkok,” Father Suksan said.

“When these children graduate, they prefer to live in the city because they are more familiar with urban life.”

Some small churches are also located in risky areas, he said, though Christians have not been the direct target of any insurgency-related violence.

Many years ago, a small explosive device was found outside the church gates in Yala, but investigators suggested it was a random case and the perpetrators were not aiming to attack Christians.

“When I first arrived here, people would ask me about my schedule,” Father Suksan said. “I made sure I didn’t say too much because I was afraid we would become a target.”

In recent years, the central Catholic office in Thailand has had to scale down operations and shut some small churches in the deep South. For example, a church located in a shophouse in Tanyoung Mat was closed and is now rented out as a source of income for the parish.

Despite having a less visible presence, Father Suksan said the Catholic churches of the South are vital to the local community.

“We are small but we are strong,” he said. “Our school is the evidence. People have faith in our schools. We don’t just provide students with an education, but train them to be good people. Locals know this and spread the word that we are caring and our students are well-behaved.”

But that doesn’t mean there aren’t tensions in the community. Father Suksan said media reports can make it look like “people of different religions living together are just fine, but in reality, there are feelings of mistrust”.

“When we’re asked to participate in a local event, we do so within set limits. We don’t want to expose ourselves to any trouble,” he said.

To solve violence in the South, Father Suksan believes the government is “heading in the right direction by trying to restore peace through suppressing illegal drugs”.

“If the government can deal with contraband goods, crime syndicates and corruption, the situation will improve, but it’s complicated because there are so many issues.”

Father Suksan urged all sides of the conflict to truly understand the teachings of their religions.

“Some key figures here use religion as an excuse,” he said. “But the insurgents have been misled. They might say they are acting in the name of religion, but they have been deceived.”

He said Christians should study Christian scripture independently, rather than simply taking what other Christians say to be true, while Muslims should do the same.

“If they thoroughly study the Koran, they will be able to live happily with people of different religions,” he said. “Buddhism focuses on always taking the ‘middle path’, so Buddhists also have to study their own religion more. People use religion as an excuse to further their own interests. But we can all live together happily if we really understand our religions.”

For a video report, visit www.bangkokpost.co.th. 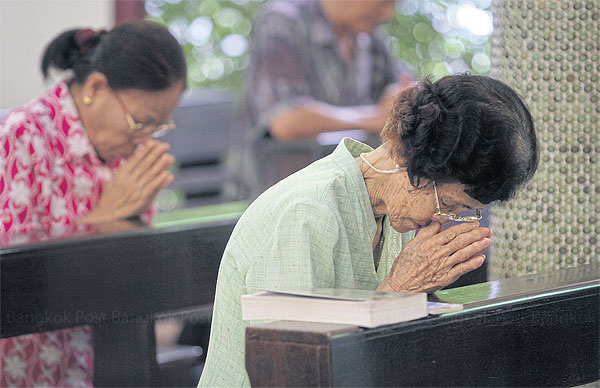 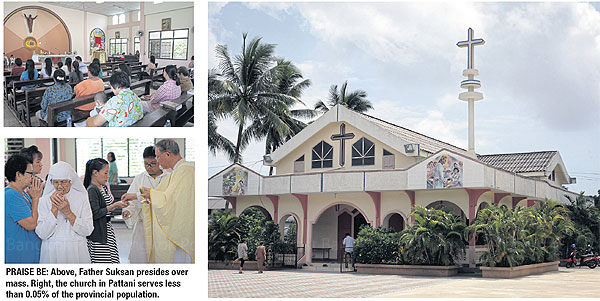