Lotto work to do

analysis: The regime's first steps to reform the state game seem to have paid off.

Although the government's efforts to address the decades-long problem of overpriced lottery tickets have borne fruit after the introduction of several measures, it remains questionable whether the cap on ticket prices has staying power.

The government has spent a year seeking a strategy to cap ticket prices at 80 baht a pair after decades of vendors selling the pairs for 100-120 baht.

The Government Lottery Office (GLO) thought the 20-40 baht excess was ending up in the pockets of ticket quota holders, retail vendors and possibly some politicians.

The belief is that if the GLO can cap the price at 80 baht, it will help 22 million ticket buyers to save 10-30 billion baht a year. 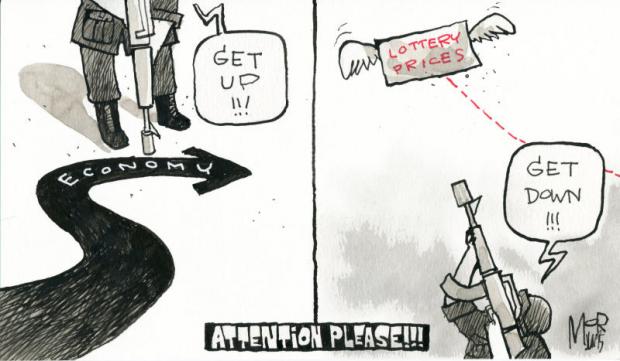 A special committee set up to tackle the issue held public hearings to test the idea of scrapping the quota system, which some observers see as the root of the overpricing problem and an invitation to corruption by "mafia in uniform".

Easier said than done. The quota system is still being used, and the GLO board just approved the allocation of an unlimited number of lottery tickets to retail vendors, issuing tickets based on demand.

On the other hand, the GLO began letting small vendors place ticket orders directly at Krungthai Bank branches on Sept 15. The office plans to start producing on-demand tickets for the first time at the Nov 1 draw.

Maj Gen Aphiratch Kongsompong, deputy chief of the First Army Region and the GLO's chairman, expects up to 8 million more pairs (16 million tickets) will be added.

There are now 74 million lottery tickets, all sold through a quota system in which they pass through several large vendors before reaching retail vendors.

The government previously imposed a series of corrective measures: offering discounts to small vendors, launching probes of backdated tax payments and applying anti-money-laundering laws to those who sell tickets for more than 80 baht a pair.

Maj Gen Aphiratch says the previous measures have been successful in capping the price at 80 baht. But once the next elected government is installed, will the policy withstand efforts to restore the status quo? 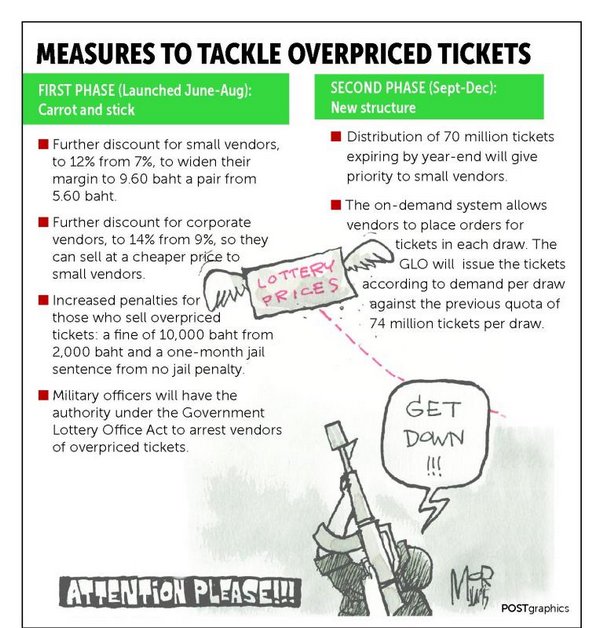 The case for price controls

The price controls are meant to close the gap between the government's lottery and underground lottery. The idea is to use the market to curb the expansion of the underground game, says Sungsidh Piriyarangsan, dean of the College of Social Innovation at Rangsit University and a member of the National Legislative Assembly.

Greater Bangkok receives 70-80% of the GLO's distributed tickets. The underground lottery allows punters to put a bet on any number at any price. The winnings would be far higher than those from the government lottery.

"If we allow the tickets to be pricier, it gives the underground system an edge over the state's lottery," Mr Sungsidh says.

The government, of course, incurs higher costs to run its legitimate system. And with the leverage that large ticket quota holders wield over smaller retailers, it's hard to strike a balance.

"I truly agree with the idea that we should create a new market to compete with the traditional lottery market, and that is an online lottery," says Mr Sungsidh. "The online lottery can ensure tickets are sold at 80 baht a pair, and allowing 50% of the 74 million tickets to be sold online will make the lottery more sustainable."

Before the National Council for Peace and Order (NCPO) managed to cap ticket prices at 80 baht a pair, three or four quota holders set terms for the market. Some politicians exploited the situation by demanding large amounts of money from the quota holders.

"The NCPO tried to solve the problem and must hold its stance," says Mr Sungsidh, a former vice-chairman of a subcommittee overseeing lottery quotas. "Without that strong will, the lottery will not be able to sell at 80 baht."

Loxley GTech Technology Co won a contract to supply online lottery vending machines 10 years ago, but the scheme went nowhere and was shelved.

Mr Sungsidh says the GLO should provide a quota of online lottery machines to the disabled and the poor, state-owned banks should take part by offering loans, and quota holders who are political operatives and not genuine lottery vendors should be reined in.

He also wants the government to reform the GLO and related laws to foster good governance.

For example, those who have conflicts of interest should be prohibited from sitting on the GLO board, while representatives of civil society should have seats.

Thanavath Phonvichai, an economist and GLO board member, says online lotteries are held the world over and have failed to materialise in Thailand for two reasons: public resistance and bureaucratic inertia.

"It's like asking farmers to stop farming and do something else -- you're going to shift our benefits from selling lottery tickets to others, perhaps those online ticket operators," he says.

"Why do we need to change? Instead, we've submitted a request to the prime minister to print more 10 million tickets for us [the group]. We believe demand is higher than supply."

Mr Thanavath says the lottery is a complex issue, one that is hard to resolve without side effects.

Through the current quota system, the government can secure steady revenue by fixing the number of tickets and the price for each draw, with more than 100,000 retail vendors -- including non-profit foundations, disabled groups and street vendors -- buying tickets from wholesalers.

Each layer of the market has costs, with small vendors the last link in the selling chain. The most recent on-demand measure is intended to bring the market mechanism to bear on prices.

At least 400,000 retail vendors are on the waiting list for on-demand tickets, which Mr Thanavath and the GLO board hope will indirectly solve the quota issue.

"Mr Sungsidh may be concerned about retail vendors not having leverage with large quota holders, but if the latest measure works, this concern should no longer be an issue," Mr Thanavath says. "Now that we've launched the on-demand system, we'll see if demand is high enough to counterbalance those big players. If our plan works, we may see retail vendors join hands to ask for loans from financial institutions."

The GLO plans to reduce the quotas of big players and distribute an increased share of tickets to retail vendors. The main concern is retail vendors have no network, and if they are unable to sell all of their tickets, they may leave an inconstant number in circulation, pushing people away and into the underground lottery.

Price increases are a non-starter, as costlier tickets would give players yet another excuse to go underground, Mr Thanavath says.

Thanakorn Komkrit, coordinator of the People's Network for Lottery Reform, says the 80-baht price cap addresses only overpricing, which is not the root cause of the lottery's woes.

In his view, the way forward is to overhaul the GLO and promote transparency, efficiency and graft-free operations -- for starters, by cutting the connection between senior GLO officials and influential wholesalers.

The monitoring system and separation of the operator and regulator must be absolute, Mr Thanakorn says.

An office worker who goes by Nitaya says she spends 500 baht a month on the government and underground lotteries.

Asked if lottery prices influence her purchases, she says they matter a good deal.

"Since the government began strictly controlling prices at 80 baht a pair, it feels more  enjoyable playing the lottery," Ms Nitaya says. "If it rises to more than 100 or 110 baht like before, I'll still buy, but I'll buy fewer."

She laughs at the question of whether 6,000 baht a year is better saved than spent on lottery tickets. "I'll buy them anyway, more or less," she says. "I always hope I'm lucky enough to win the big prize."