Called up in the military's charter draft
Thailand
Special Report

Called up in the military's charter draft

Meechai Ruchupan has a long history with coup leaders and constitutions, and has once again been turned to for his controversial legal views.

After Meechai Ruchupan helped write a new constitution following the 1991 coup, he was criticised for paving the way for a non-elected general to be appointed prime minister. 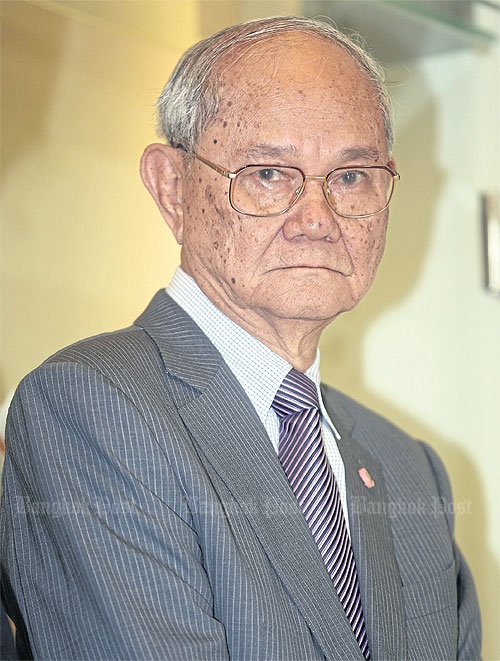 More than two decades later, the military is once again calling on the services of the 77-year-old legal expert to head the team drawing up a new permanent charter.

A former Senate speaker and government legal adviser, Mr Meechai is regarded as one of the leading constitution drafters in Thailand, along with Wissanu Krea-ngam and Borwornsak Uwanno.

After graduating from Thammasat University’s Faculty of Law, where he was in the same class as former prime minister Chuan Leekpai, Mr Meechai won a scholarship from the Civil Service Commission to further his studies in law at the Southern Methodist University in the United States.

It was this experience that enabled him to contribute to several constitutions.

Born in the central province of Ang Thong in 1938, Mr Meechai attended primary school at a local temple school. His childhood was characterised by poverty, and at one stage he worked on a fishing boat to earn extra income for his family.

Mr Meechai’s civil service career began in 1969 when he became secretary of the Office of the Juridical Council — now known as the Council of State — legislative committee, and rose to director of the office in 1974. He became a legal adviser to prime minister Sanya Dharmasak and later became deputy-secretary-general to the premier Kriangsak Chomanan.

Under the wing of former prime minister and privy councillor Gen Prem Tinsulanonda, Mr Meechai's political fortunes rose without him ever standing for election. He served as a legal adviser to the government of Gen Prem (1980-88), holding the post of PM’s Office minister as well as Senate speaker.

The first time his legal expertise was called upon by the military was in 1991, when the civilian government of Chatichai Choonhavan was overthrown in a coup. Chatichai's executive was ridiculed as the “buffet cabinet” by the generals for its tendency to grab all it could through corrupt means. It was also labelled a “parliamentary dictatorship”.

The military appointed Anand Panyarachun temporary prime minister. Mr Meechai was enlisted to write a controversial new constitution which would allow non-elected people to be appointed prime minister. An election was scheduled for March 1992.

Narong Wongwan’s Samakkhitham Party led a five-party coalition to victory. But amid US allegations he was involved in the drug trade, Mr Narong declined to serve as prime minister. The Justice Party was seen as a nominee party of the military, and Gen Suchinda Kraprayoon, who was not elected, assumed the prime minister’s role.

Opposition to the Suchinda government led to the violent public protests of May 1992, which left 52 people dead and 600 injured. Gen Suchinda’s time as prime minister lasted 48 days, from April 7 to May 24. He was later granted an amnesty.

Mr Meechai was outspoken in his role, and in 1994 he stirred controversy when he voiced opposition to provincial governors being elected, saying the move would be tantamount to changing the country’s administrative system.

A charter drafting committee was established which came up with the 1997 constitution, known as the “people’s charter”, although Mr Meechai was not involved. The new charter was praised for enshrining people’s rights and increasing the participation of the public in the election of a government.

However, Mr Meechai raised concerns about the election of senators under the charter’s provisions. As the Senate prepared for the election of its 200 members for the first time in early 2000, Mr Meechai expressed concerns about candidates' affiliations with political parties. The charter stipulated that the senators be “independent candidates” in order for the Senate to maintain its role as an overseer of the lower house.

Mr Meechai, a technocrat by training, feared that the Senate could be dominated by party-endorsed members. “There is a lot of speculation now that the elected Senate will turn out to be a second-class body following the lead of political parties,” he
said at the time.

Mr Meechai is known for his right-wing views, and his commentary has occasionally made headlines. In 2002, he accused those who were protesting against the deportation of two Far Eastern Economic Review reporters, who had written about the monarchy, of being “un-Thai”.

In 2006, he wrote that Thaksin Shinawatra could be accused of offending HM the King in a speech, in which the then prime minister made oblique references to someone “above the constitution”. In 2011, he lashed out at the US after Washington raised human rights concerns over lese majeste cases.

In 1997, with the economy continuing to weaken as the government was forced to adopt austerity measures due to its obligations with the International Monetary Fund, he urged the government to apply the self-sufficiency approach advocated by HM the King instead of promoting mass production. “The country gained little from foreign investment,” he said.

He was an outspoken critic of several bills related to economic reform, saying it would place the Thai economy under foreign control.

He was criticised by then prime minister Chuan for opposing bills which were part of the conditions of the IMF’s US$17.2 billion economic bailout package following the Asian economic crisis.

After his term as Senate speaker expired in 2000, Mr Meechai chaired a panel drafting amendments to the election law. Democracy groups accused the government of adding insult to injury by appointing him to head the committee, noting that he was a fierce opponent of constitutional reforms and had links to several former military regimes.

The committee agreed to seek five major changes including empowering the Election Commission to ban candidates suspected of cheating from running in re-elections, and to dissolve any political party whose leader or executive was found to have committed electoral fraud.

In 2001, Mr Meechai accepted Thaksin’s invitation to chair a legislative committee. His priority was to amend the 11 economic reform laws prescribed by the Chuan Leekpai administration, since they catered more to foreign creditors’ interests in the early stage of their implementation.

He led the revisions and drafting of a new law to accommodate bureaucratic reform as well as other amendments to financial laws.

Mr Meechai would deny ever having served as a legal hand for Thaksin. He was appointed to the National Legislative Assembly in 2006, after the Thai Rak Thai government was toppled.

“I only spent a short while working with his government. How could they call me a Thaksin supporter?” he asked.

On Sept 19, 2006, the armed forces tore up the 1997 constitution — widely hailed as the best the country ever had — after they ousted Thaksin in a coup.

Mr Meechai was approached by coup leader Gen Sonthi Boonyaratglin to head the drafting of an interim charter prior to the full-scale constitution drafting process. He was also seconded to help write announcements and orders.

It took him less than a month to draft the interim charter, which envisaged a national legislative assembly with 200 members, all to be appointed by the Council for Democratic Reform (CDRM).

Academics, however, urged the CDRM to allow the public to play a greater role in the charter drafting process, and began to come up with new versions of the interim charter to counter Mr Meechai’s. Chaiyan Chaiyaporn of Chulalongkorn University’s faculty of political science at the time expressed disapproval of the draft, saying it would fail to respond to the current political and social problems because Mr Meechai’s legal perspective was "outdated".

The constitution drafting committee which came up with the 2007 charter did not include Mr Meechai.

Mr Meechai’s 2006 chairmanship of the National Legislative Assembly, which assumed the duties of the House and Senate, was met with strong opposition, and he was criticised for having served as legal adviser to previous authoritarian governments.

Privy Council president Gen Prem, however, called Meechai an “ace legal expert” and honourable person who would be a “good president” of the NLA, which would pass over 200 bills into law over 18 months.

The NLA was dubbed the Khan-Tee Si Khiew (Eunuch in Green) in an annual nickname contest by parliamentary reporters. It was criticised for issuing legislation benefiting the coup-makers and increasing the power of the military, such as the controversial Internal Security Bill.

In 2007, Thailand’s 18th charter passed a referendum with a 57% approval rating nationwide.

It sought to reduce the prime minister’s authority and incorporated provisions to deal with political problems during the five years of the Thaksin government.

Mr Meechai was among the first two civilians to join the current junta body — also known as the National Council for Peace and Order — along with former finance minister Somkid Jatusripitak.

The NCPO appointed Mr Meechai as a member of a panel to follow up on the constitution drafting work and give recommendations to the NCPO, while Mr Bowornsak headed the Constitution Drafting Committee.

After the National Reform Council rejected the first draft on Sept 6, the NCPO last week unanimously approved the appointment of Mr Meechai as chairman of the new 21-member CDC.

The committee is expected to come up with a charter that meets the NCPO’s five-point framework, which includes mechanisms for reconciliation, people’s participation and compliance with international standards.

A first draft is expected in January, which would then be presented to the public for feedback. The deadline for the final draft is April 1.

Asked last week if he has been working with dictatorship governments all his life, Mr Meechai said “people misunderstand” his role.

“It is a misunderstanding from people who don’t like me,” he told Spring News.

He said he had worked under the parliamentary process throughout, with the only exception the government of Mr Anand.

“People tend to think that whenever there is a coup, I always get involved,” he said. “Honesty, every time I hear the news that there will be a coup I fly overseas because I don’t want to get involved.”

He said he considered being involved in the drafting of the constitution his duty. “People use you in critical moments because you have knowledge,” he said. “I have legal expertise, drafting legislation all my life. If I don’t do it, there may be more damage. I do it as a professional.” 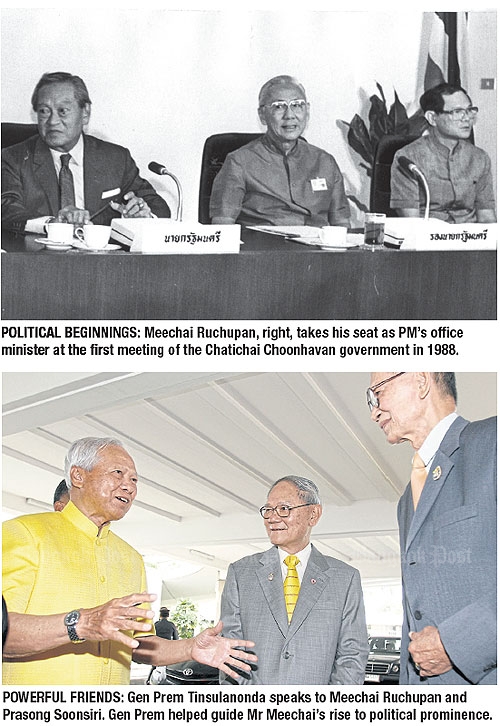 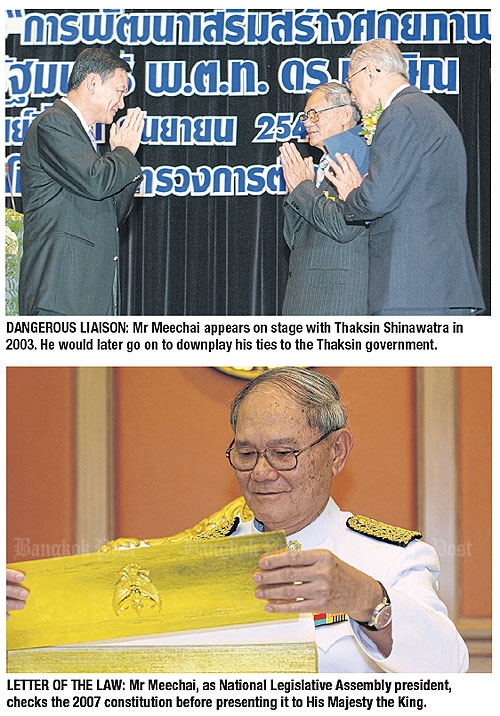 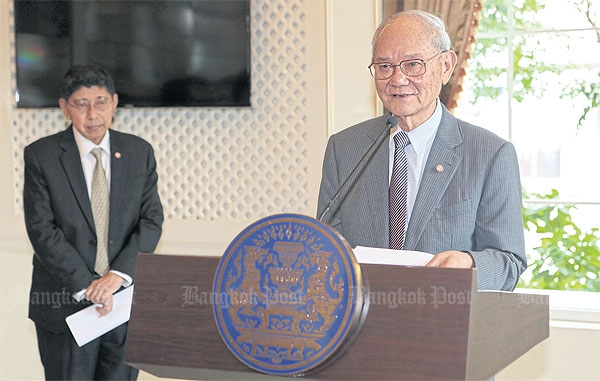 reporting for duty: Mr Meechai delivers an address at Army House last week after being appointed chairman of the new Constitution Drafting Committee.