The teachers at risk of detention
Thailand
Special Report

The teachers at risk of detention

A network of lecturers is determined to fight military intervention in academia despite facing jail terms for making a stand.

In the halls of higher learning, some academics believe the Thai military is waging a war against teachers who encourage their students to think critically. Attachak Sattayanurak, an economics and political history professor at Chiang Mai University, says the ruling junta is engaging in Orwellian “thought control” and trying to produce a generation of “stupid” students. 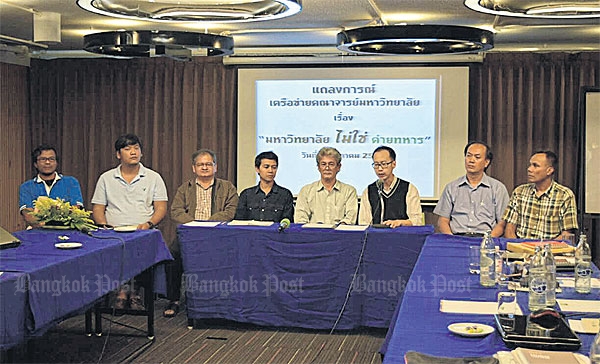 Under Watch: The University Teachers Network holds a press conference at the Ibis hotel in Chiang Mai to highlight their concerns over freedom of expression.

Mr Attachak has already felt the wrath of the Prayut Chan-o-cha administration. Notified twice by the junta since last year’s coup to come in for “attitude adjustment”, he refused to conform and told the military men if they wanted to talk they should see him in person.

But on Oct 29, two days before a joint research team lead by Mr Attachak was due to meet in Chiang Mai to discuss democracy in rural areas, Gen Prayut forced the academics to act.

The prime minister stated that university professors should change the way they teach their students.

“Why can’t they teach their students to be good people and not break the law? Teach them the way a good teacher should. Don’t agitate them.”

Two days later, Mr Attachak and his counterparts from universities in the North, Northeast and South hastily organised themselves as the University Teachers Network. They invited the media to a press conference in Chiang Mai’s Ibis hotel where they expressed concern over freedom of expression in their academic work.

They also drafted an open letter to Gen Prayut entitled “Universities are not military camps”.

“We all agreed that universities play an important role shaping the way people think and giving them better understanding,” Mr Attachak said. “We are not here to take anyone’s orders like in a military camp.”

But the military was not in a listening mood. Six of the academics were later charged with violating the National Council for Peace and Order’s ban on political gatherings of five or more people and face the prospect of six months’ jail if found guilty.

The NCPO issued the summons on Nov 10 and two weeks later the six accused and their supporters showed up at Chang Puek police station to report. They denied the charges. 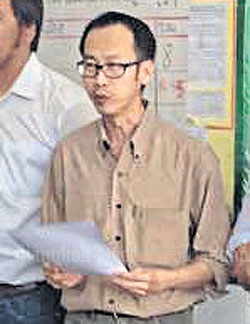 Among the supporters was Booncherd Nuim from Burapha University. Mr Booncherd, an assistant professor of sociology who teaches community development, had been at the Oct 31 press conference but was not charged.

Despite Mr Booncherd not being on the junta’s radar, he believes it’s important his students are encouraged to think critically about social problems. “If I don’t teach my students to criticise politics, then it will be difficult for them to understand what I am trying to teach,” Mr Booncherd said. “I can’t shut their eyes and ears. It’s normal to debate and interact in the classroom with rational reasoning.”

Mr Booncherd is part of Mr Attachak’s nationwide research team looking at democratic change in rural areas, heading up the eastern region of the project. Although he wasn’t summoned, his position is no different from the other academics.

“We have to be able to criticise anyone based on fact,” he said. “I am speaking for everyone, not for academics only. We have the right to criticise the government and we shouldn’t have to be scared of being controlled by anyone’s order.”

Since the coup last May, Somchai Preechasilpakul, an associate professor of constitutional law at Chiang Mai University, believes free speech and the ability to express opinions, especially those opposing the NCPO, has become narrower.

Mr Somchai, who has been lecturing since 1993, was one of the academics charged by the NCPO. 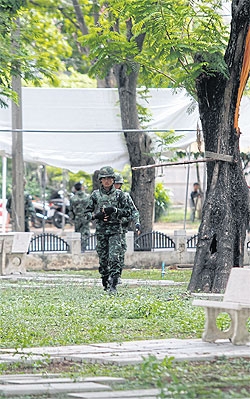 Cracking Down: Left and above, soldiers and police move in to Thammasat University after learning that students were preparing to defy a ban on political gatherings.

“One propaganda message that the government likes to say is that our country will get better and the situation will be better,” Mr Somchai said. “It has been more than a year but nothing has changed.”

Mr Somchai said far from the country moving forward, it was going backwards when it came to freedom of expression in academic areas.

He said the military had often sent him letters asking for his “cooperation” not to hold a seminar, regardless of what issue was up for discussion. He said as long as his name appeared on the list of speakers, the conference was either cancelled or heavily monitored by the military.

“One time I was invited to be the guest speaker on the issue of LGBT rights,” he told Spectrum. “As soon as the military saw my name on the list, they sent someone to monitor me and make sure that I didn’t say anything they didn’t want me to say.

“Do they even know what LGBT is? I don’t think so. They are just being paranoid.”

Mr Somchai said he had been monitored by authorities since the 2006 coup which ousted former prime minister Thaksin Shinawatra.

But the surveillance under the current junta was far more intense and compared to the time after the 2006 coup he felt there was no intention to quickly return power to the people.

He also believes the political turmoil of the past decade will only worsen after the military government steps down as the public will be emboldened to state their grievances and problems.

“As soon as we have no longer have guns pointing at us, there will be a lot more people come out to state their struggles and difficulties, especially farmers all over Thailand,” Mr Somchai said.

On Nov 24, the Scholars at Risk Network sent an open letter to Maj Gen Kosol Pratumchart, the commander of the 33rd Military Circle, and Pol Lt Gen Thanitsak Thirasawat, the Provincial Bureau 5 commissioner in Chiang Mai, asking them to drop the charges against the six academics.

Scholars at Risk is an international network of more than 400 universities and colleges in 39 countries dedicated to promoting academic freedom and its constituent freedoms of thought, opinion, expression, association and travel. 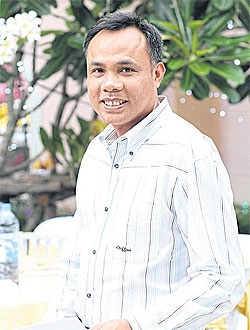 The group said the facts of the case indicated the academics had been charged as a result of non-violently exercising their rights to freedom of expression, freedom of association and academic freedom. It said these rights were protected under international human rights instruments including the Universal Declaration of Human Rights and the International Covenant on Civil and Political Rights, to which Thailand has acceded.

The charges not only raise serious doubts about the ability of intellectuals in Thailand to exercise their right to academic freedom, but could also impact the future quality of the country’s research and education sectors.

Under the umbrella of the Thai Academics for Civil Rights (TACR), a Change.org campaign has also been set up calling for the NCPO to stop violating academics’ human rights.

The group says that as the junta assumed power through illegitimate means which violated the constitution and Thailand was a party to the International Covenant of Civil and Political Rights, the intimidation and prosecution of those who do not share their views is “unconstitutional and illegitimate”.

“The military government and the NCPO must return power to the people and stop drafting a constitution with hidden agendas to create unjust conditions via an unacceptable constitutional drafting process in order to prolong its rule,” the TACR said in a statement.

“The military government must accept the fact that after a year, people have realised that it is not capable.”

Gen Prayut’s only response to the charges against the academics was to say “if they are not afraid of the law, it’s up to them”.

“If people follow these activities, they will be in trouble. Well, it’s up to them. Some might find guns or bombs to attack them. It’s up to them, but I won’t do that of course,” he said.

Mr Attachak said he never experienced the military interfering in the classroom or at any of his seminars. However, he said there were some attempts to control the content of what he can and can’t teach in the classroom.

The situation was not as bad as Thammasat University in Bangkok when the military stopped an academic seminar by cutting the power and water to the auditorium or cancelled academic meetings.

Mr Attachak said he sees no point in following military orders as he is not a cadet.

“It is such an uneasy and uncomfortable feeling to be forced to do what is deemed right for us,” Mr Attachak said. “It’s like we have no freedom to breathe all the way in.”

In the past, Mr Attachak has organised seminars with more controversial topics. Over the past 30 years he has criticised all governments when he believes they have erred, irrespective of their political persuasion.

Mr Somchai thinks every group in society should enjoy freedom of expression, and one of the reasons he became an academic was to get this message across to the public via his students.

“We are not going to tell our students to turn left or right or do what we want them to do,” he said.

“I want them to be able to think and analyse whether or not they want to do what we suggest. That is the most successful way for university students to learn.

"We are never ever going to tell our students to listen to the government and follow their instructions.” 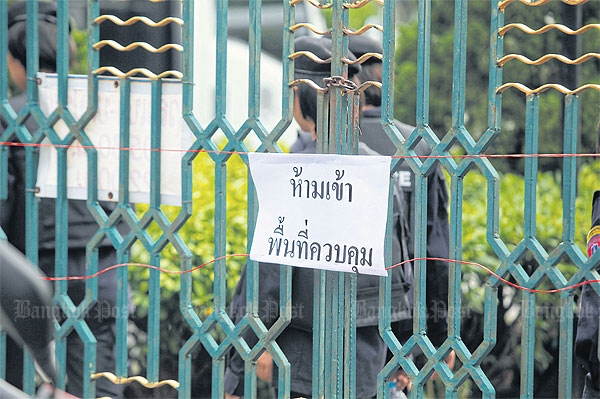 ‘No entry, Controlled area’: Soldiers and police control a part of Thammasat University to prevent anti-coup students from defying a ban on political gatherings. 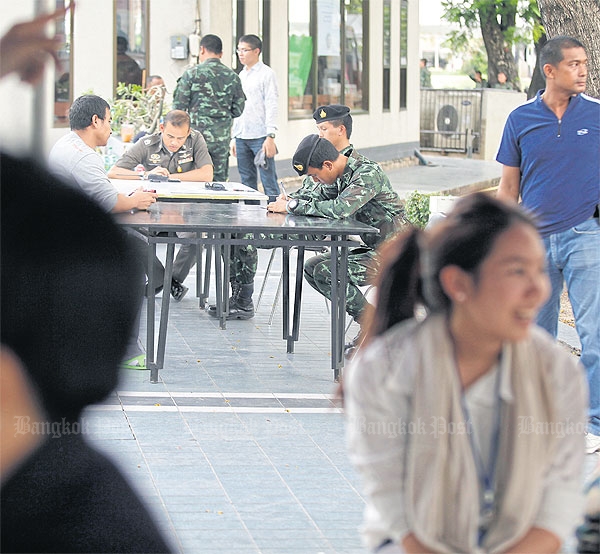 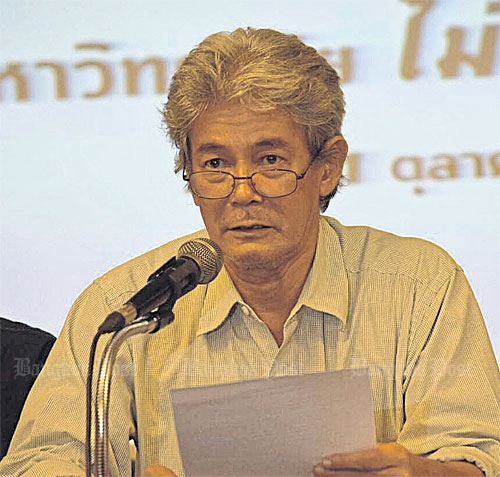