Built on the banks of the Chao Phraya River in the 19th century, the ailing owner of this stately residence wants to see it restored.

A teak “gingerbread house” sitting on the banks of the Chao Phraya in an old quarter of Thon Buri often catches the eye of passers-by because of its aged look and exquisite fretwork. 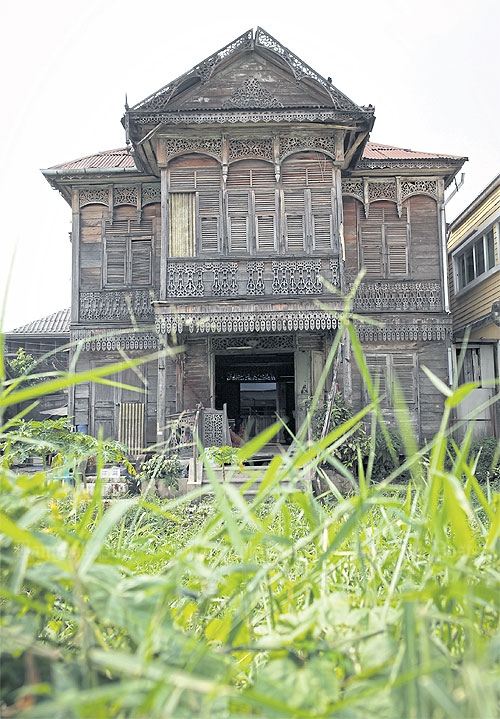 Nobody home: The crumbling ‘gingerbread house’ has been used as a storage facility.

Its dilapidated condition and uncut grass in the front yard, which has been deserted for 30 years, also pique curiosity. “Is it haunted?” some people ask.

Located in a small Catholic community in Kudeejeen, the building is known by locals as “the blue house”. This is despite the fact that the paint has completely worn off, revealing the natural colour of the hardwood underneath. There are splits and cracks in the walls, doors and window frames, adding to the weather-beaten appearance.

A couple of wooden shutters have been removed and replaced by zinc sheets that have rusted over the years.

The owner of the house is Somsook Jutayothin, an 85-year-old single woman. Ms Somsook admits that age and infirmity mean it’s been a while since she has seen the condition of the house. She is too old to walk now. “It’s too much to see how the house has continuously decayed,” she said.

Ms Somsook is no stranger in the neighbourhood. She owns Santa Cruz Kindergarten, which has served the community for 54 years.

Widely known as “Kru Add”, the frail old woman can no longer walk to her old house, which is only steps away from her home in the kindergarten. She cannot even see it, her view obscured by another building.

“But I have always wished to see this house renovated so that it will be passed on as a national treasure,” she told Spectrum.

“I am dying and I want to make sure the house will be restored before I die.”

The Kudeejeen community traces its history to 1767, when Catholic clergy and Portuguese settlers started building a community on the west bank of the Chao Phraya River.

Ms Somsook said the original name of the building was Windsor House, after the original owner Louis Windsor, a wealthy British merchant who owned Windsor Shop on Charoen Krung Road.

Windsor, the son of an English captain who came to settle in Thailand, married Sombun, the daughter of a wealthy rice miller from Klong Bang Luang. After they married, Windsor built the house during the reign of King Mongkut. Ms Somsook could not recall the exact year when the house was built.

The decorations of the house reflect the status of the family which owned the luxury Windsor Store, widely called the See Ta (Four Eyes) Store.

In its prime, the impressive house reflected the social status of the Windsor family. The two-storey house was built at the centre of the Kudeejeen community, faces the Chao Phraya and has spectacular views of Wat Arun, which is better known as The Temple of the Dawn. Windsor House features vintage window grilles, shutters and decorative gables.

Originally there were two houses on the Windsor property, a brick and cement house out the front and the wooden house.

The brick house, however, has since been demolished.

Ms Somsook is concerned that if the wooden house is not renovated soon it will be ruined beyond repair, like the brick house was.

“It collapsed and was washed away by the river 20 years ago. If we don’t pay attention, the remaining wooden house may end up suffering the same fate,” she said.

Ms Somsook inherited the property from her mother, who was adopted by Ms Sombun of the Windsor family. She has never lived in the house, but over the past nine decades has seen it go from being a lively family residence to a storage facility and to its current state of disrepair.

Her family leased it to expatriates during World War II.

A hole in one of the windows is said to have come from a bullet fired during the battle known as the 1951 Manhattan Coup, when naval officers attempted to overthrow the government of Field Marshal Plaek Phibulsonggram.

The house was later rented out as a storage facility. About 30 years ago, Ms Somsook took ownership of the estate and locked it up until recently, when she let a couple of homeless people live in the property.

For the past 10 years Ms Somsook has been trying to get help to restore the house. “The foundations are still solid, even though the house is crooked. It is still possible to restore it,” she said.

“It’s beyond my ability, though. I am a woman and living alone. I don’t have the architectural knowledge to fix it. But I know the house is worth preserving.”

A restoration will cost a lot of money, way beyond Ms Somsook’s income from the small kindergarten.

At its peak, the kindergarten had 60 students, who paid 2,000 baht each per semester. Now the kindergarten has only seven students left after the Santa Cruz Suksa Secondary School opened its own kindergarten a couple of years ago in the same area. Many parents prefer to send their children to the new kindergarten so they don’t have to change schools.

According to Associate Professor Suphawadee Ratanamart, a lecturer in architecture at King Mongkut’s Institute of Technology Ladkrabang, the gingerbread house was built in the American architectural style popular in the 19th century.

“The unique characteristic of the gingerbread house is its decorative fretwork, which imitates the cute sugar-coated gingerbread home described in the classic Hansel and Gretel fairy tale,” she said.

Ms Suphawadee added that gingerbread houses were popular in Thailand during the rule of Rama V. Wealthy people of high social standing built their houses in this style to showcase the craftsmanship required to make the intricate fretwork.

In later years gingerbread houses became less popular. As people cut their construction costs during a later economic slowdown, they cut out unnecessary details such as decorative fretwork, which takes money and skill.

“The fretwork is usually made of wood. It is easy to crack. Only an experienced artisan can accomplish the task,” she said.

There are still quite a few gingerbread-style homes in Thailand. Among the best preserved of the gingerbread homes is Diamond Hall, or Phra Tamnak Petr inside Wat Bowon Niwet, which was built in 1914. Another well-preserved gingerbread house is on Dinso Road.

Thais were inspired to build the gingerbread homes after seeing them in nearby countries such as Singapore and Myanmar.

Ms Suphawadee said many gingerbread houses were torn down because they were difficult to preserve. Only skilled artisans know how to preserve the old wood.

Ms Somsook is concerned that her house will also disappear unless it gets the proper care.

The house is under threat from floods and a lack of maintenance. Some parts of the houses, such as the decorative panels, have been stolen.

In the past decade when she was still able to commute around town by bus, Ms Somsook went to various agencies and asked them to help conserve the house. A couple of years ago the Fine Arts Department issued a protection order for the site under the Historical Sites Protection Act, requiring any changes to the building to be overseen by the department. But the department has not started renovating because “it said the renovation depends on budget and the department’s priorities”, Ms Somsook said.

The house is also recognised by the Association of Siamese Architects, which conducted a conservation study to conserve the cultural heritage along the Chao Phraya River six years ago. But a plan to renovate the house has yet to materialise. An ASA staff member who was involved in the plan was not available for comment.

Ms Somsook suspects the ownership of the house may be an issue holding up the renovation.

To show his appreciation for their support, King Taksin granted the Portuguese a plot of land near his new palace so they could build a church and renew their community.

Ms Somsook said according to the law, the Catholic Diocese owns the plot of land where the house stands as King Taksin gave the land to the Catholic community on the condition that the ownership cannot be transferred or sold.

Now Ms Somsook has trouble moving around and said she wishes for a miracle.

“I wish someone would come forward and help restore the building. My biggest hope is to see the house restored to its former glory for the next generation to see.”

Ms Suphawadee said the old property should be preserved for the next generation. “Architecture reflects our civilisation that evolves with time,” she said. 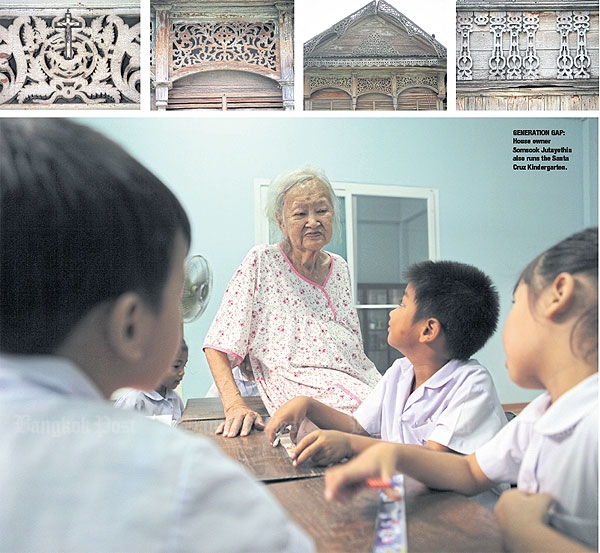 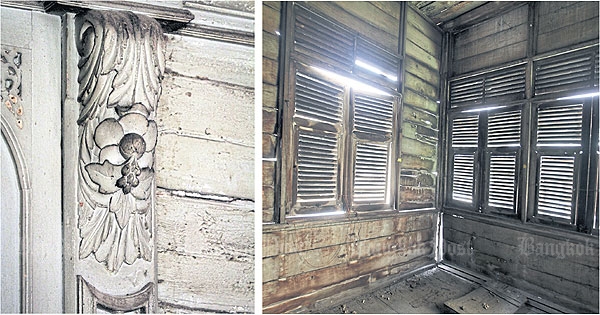 FADED GLORY: Left, intricate fretwork was used as a display of wealth. Right, the interior is now in disrepair. 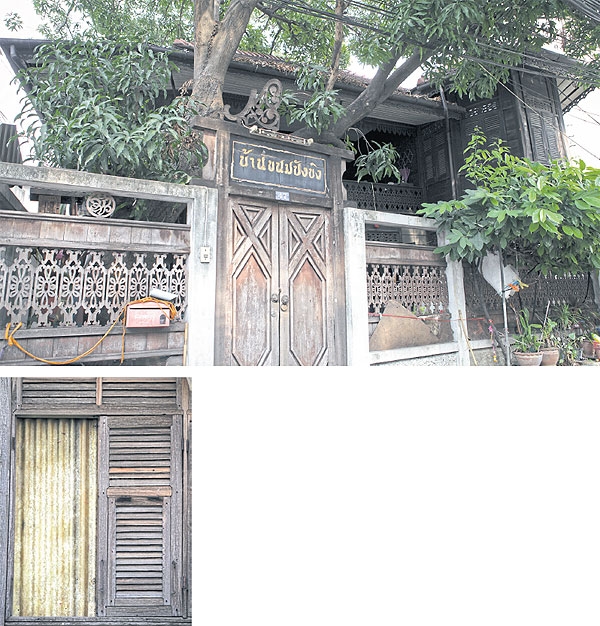