Most tourists enjoy Thailand, like this man joining in Monday's Chinese New Year festivities. But a 54% rise in deaths of visitors is a concern for the government. (M2F photo)

The Tourism and Sports Ministry is working to address the issue of tourist safety after a 54% jump in the number of foreign tourists who lost their lives in Thailand last year.

Of the 83 deaths, 34 were from road accidents, nine from swimming and boating accidents, six from congenital disease, four from suicides and 30 from other causes.

Putting the numbers in focus. In 2015, visitors to Thailand had about

Although Thailand's tourist industry has been growing, with the number of tourist arrivals reaching almost 30 million visitors last year, tourist safety is still a major concern.

For safety and security, Thailand came in 132nd place out of 141 countries and was the lowest in Asean with a score of 3.75. 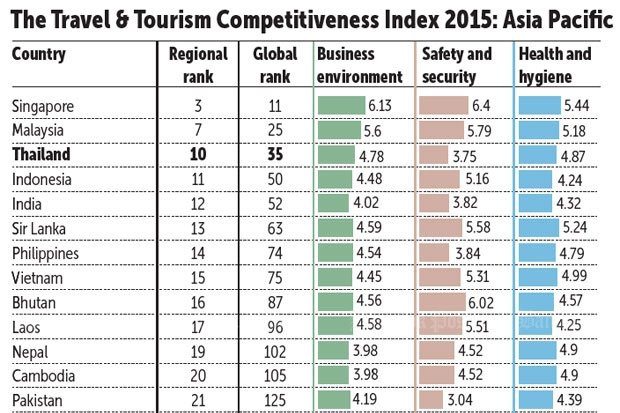 The issue came to the forefront last Friday when Prime Minister Prayut Chan-o-cha expressed his concern after Russian tourists were seriously injured in a speedboat accident near Koh Phi Phi. Gen Prayut's remarks prompted authorities overseeing tourist safety to seek out a solution.

Pongpanu Svetarundra, permanent secretary at the Sports and Tourism Ministry, accepted that Thailand needs to upgrade its safety and security standards for tourists as soon as possible.

"In the past, we did not deal with the root causes of the tourist safety problem. From now on, we will look at the issue and address it seriously," he said. He hoped to see the country's ranking in safety and security move up to the middle tier of Asean countries.

The study on water accidents will be done in Krabi while data on road accidents will be gathered in Chiang Mai. Governors of the two provinces will chair the research committee with the reports expected to be completed within three months.