A mother of three and former restaurant owner, Katai Kamminga has created a monument to the sensual in Chiang Mai.

‘Eroticism is in everyone’s thoughts, but not everyone is brave enough to express it,” Katai Kamminga says of the passion which has taken over her garden. In the past two years, she has transformed the two rai of land she owns in a tucked-away part of Chiang Mai’s Mae Rim district, filling it with suggestive art.

Ms Katai was born in the northeastern Ubon Ratchathani province, where she had a traditional upbringing and a family who taught her to appreciate the artistry of Thai silks and fabrics. Fascinated by their patterns and the way they felt on her skin, Ms Katai enjoyed wearing Thai fabrics when she was young.

In 1988 she moved to the capital to pursue a degree at Bangkok University, choosing to study in the faculty of business administration because she thought it would be easy to get
a job after graduation.

With average English-language skills, Ms Katai asked her parents for the chance to study in Sydney during the break after her freshman year. She arrived in Australia in 1990 and loved her life there, staying for a year before making her way back to Bangkok. When she returned, she was not concerned about continuing her education — instead, she had a business proposal for her parents.

Ms Katai told her family that she wanted to open a Thai restaurant in Australia, and her plan won the backing of the family. She applied for a visa and took off, and was soon running a restaurant called Thai Lotus in Canberra. Her business flourished, as she expected. While there, she met a man who won her heart and she married him.

She ran the restaurant for seven years, but when she fell pregnant with her second son she decided to sell her share to her business partner and concentrate on her family. Ms Katai now has three children with her husband. When her children grew up, she felt like she had too much time on her hands and began giving Thai cooking classes from her Canberra home.

She studied the Karma Sutra and collected many movies and paintings, but the thought of one day putting them on display was left in the back of her mind.

With limited land on her Canberra property, Ms Katai could do little other than daydream about what it would be like to have her own sexy garden.

In 2008, when Ms Katai visited her family in Thailand, her sister suggested she invest in land and pointed out there were good deals to be had among the properties seized by the Legal Execution Department.

A property in Mae Rim which cost one million baht caught her eye. She travelled to Mae Rim to inspect the place and fell in love with it immediately. She bought the farmhouse and two rai of land and worked on improving the property, turning the henhouse into a modest holiday home before setting to work on the main building.

Ms Katai returned to Thailand more often when her mother Niyomwan Tonprom became ill. Her mother died while Ms Katai was in the middle of renovations, which meant a lot of travel between Chiang Mai and Ubon Ratchathani.

SEX IN THE GARDEN

Ms Katai contacted local artists and landscapers to help turn her dream into reality. She asked Chiang Mai’s Nongnuch Park to help her with the design, telling them only that she wanted to have a lot of suggestive art in her garden. They transformed her fantasy into reality inch by inch: flat land was sculpted into curves resembling the shape of female hips and head-high hills were created as breasts.

They also suggested Ms Katai decorate the garden with tropical plants that symbolise sexuality such as spadix, hibiscus and orchids. To complete the sensual experience, the landscaper added flowers with arousing scents, such as rose, with colourful flowers enhancing the sexy and playful part of the garden’s character.

To complete the garden, Ms Katai went in search of any sculpture that would fit her theme. By chance, she met an award-winning student from Chiang Mai University’s fine arts department who agreed to make a sculpture for her garden.

She then engaged several students from Chiang Mai art schools to build different sculptures for her.

“I want to make my garden a home for young artists who want to show their work,” Ms Katai explained.

The first one visible when passing through the main entrance is a phallic sun dial. Three cement penises, mounted on the wall in front of the garden, serve as a water fountain. Walking further, the hills of hips and breasts reveal themselves, along with many sculptures of women in various poses on the lawn.

Although the garden is not very large, each erogenous zone has been carefully thought through.

“I haven’t named any of the sculptures or artworks here,” Ms Katai said. “I just want people to come in and have an open mind. Then they can appreciate what’s in front of them. Whatever they think or feel, that will serve as the name of the artwork.”

ONE OF THE LOCALS

“I was expecting to get negative feedback from local villagers here but it turned out that they can accept it better than I thought,” Ms Katai said. “The negative feedback has come from outside the area, such as from police officers.”

Ms Katai employs several people to help maintain the property and the garden. She hired members of a local hill tribe to work around the house and has helped provide for their schooling and higher education.

“Since they have been good to me, I will be good to them in return,” Ms Katai said.

The garden instantly attracted media attention, with one international news website calling it the "Garden of Hedon”. Eye-catching images of the garden and its art have drawn more visitors, and police officers have been among them.

A month after it opened, a group of 11 police officers paid an official visit to the garden and Ms Katai’s home. They asked her what kind of business she is running at the garden and tea house, as they had heard that foreign media had suggested she might be selling sex. Ms Katai opened the door and allowed the officers to come in to check. They told her to be prepared for a press conference the following day.

The officers returned the following day with a gaggle of local media trailing behind. They told the reporters that they would raid the "questionable park".

But after Ms Katai explained the garden’s purpose to the media and police, the raid morphed into a press trip filled with fun and joy. The garden received free publicity without even asking for it.

The police left the garden with no evidence that any other shady business was going on behind the bushes. The number of tourists dropping in to see the garden only continued to rise. Ms Katai said at least 10 people visit per day, and sometimes group tours arrive. Most of the visitors are European, Taiwanese and Singaporean.

Among the curious is Ian Gatenby, a 60-year-old biker from Sydney who explored the garden last week with his Thai girlfriend. He told Spectrum that he read about the garden in a magazine and wanted to see it for himself after flipping through the pages. “It is very well decorated. The garden is exotic and sexy,” Mr Gatenby said.

Ms Katai dresses in traditional Thai fabric every day to greet the customers, and provides all the guided tours herself. She said she gets to promote Thai silk, Lanna culture and artwork from the front door of her home.

“I want people to come in with imagination and their minds wide open,” she said. “Then have fun here. Sex is part of life and it creates life. There’s nothing to be ashamed of. I think about it all the time because it is a beautiful thing. How about you? What is your fantasy?” 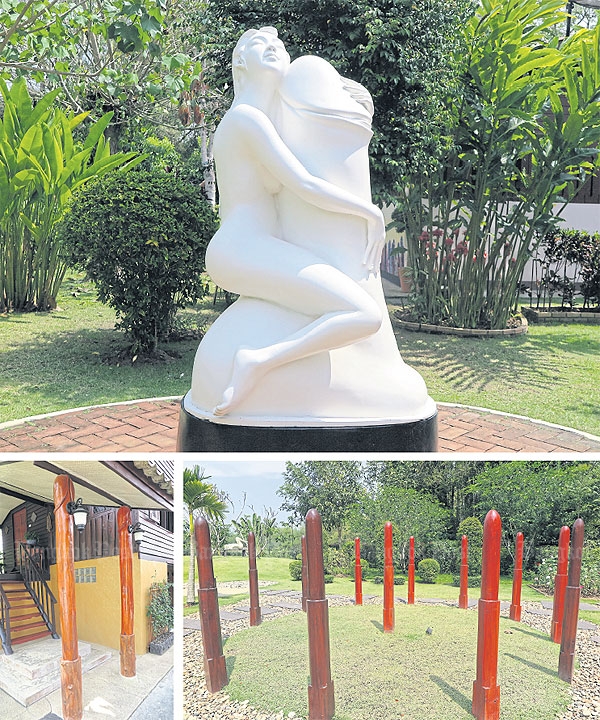 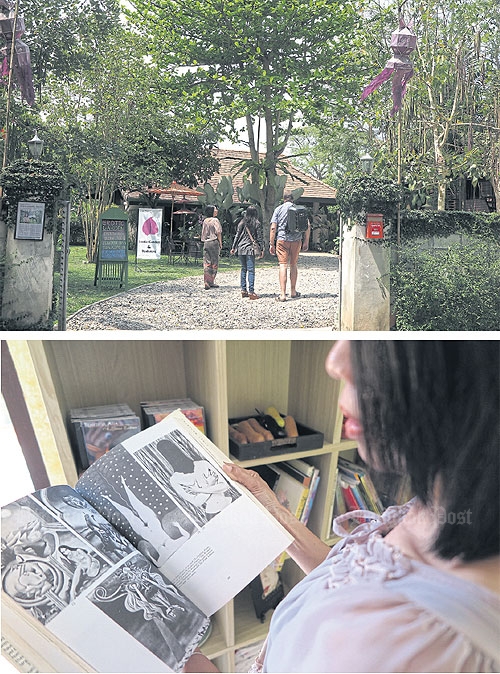 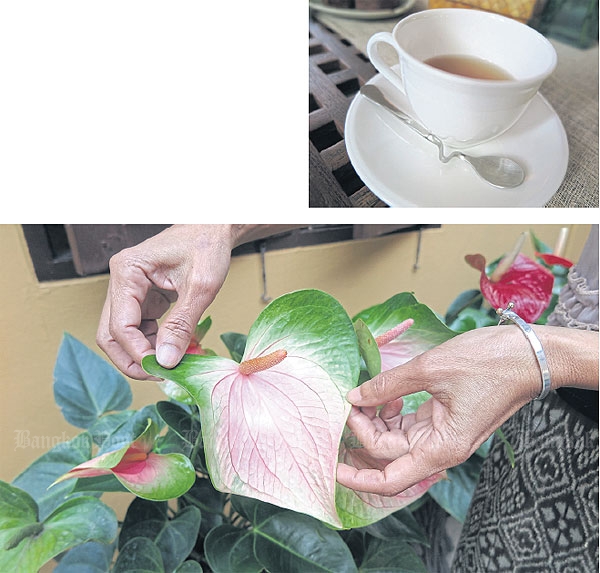 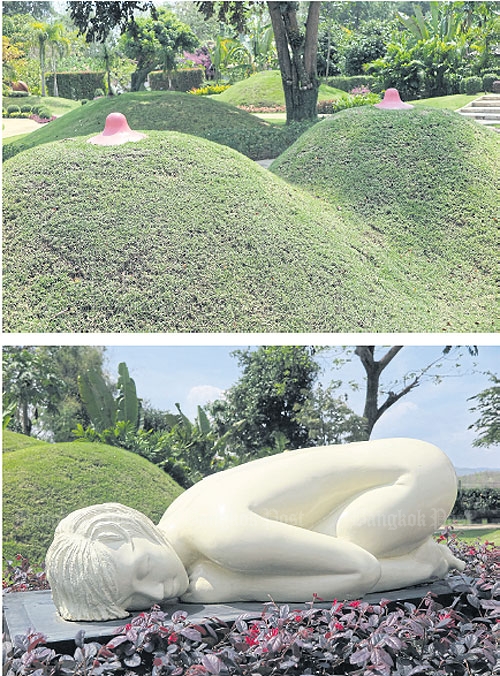 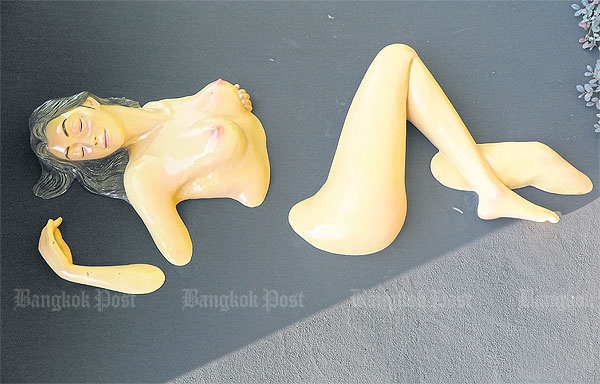 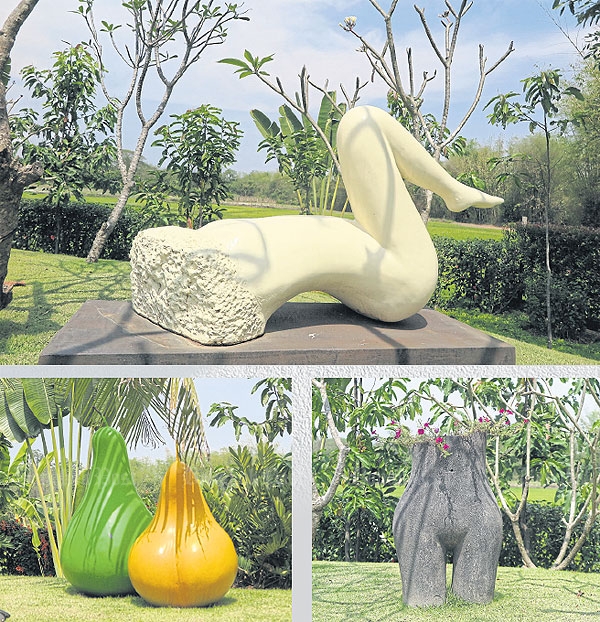