City Hall wants to preserve only the old Phra Nakhon Wall and Mahakan Fort and clear the community from the area to pave the way for a public park. (Photo by Apichart Jinakul)

The Mahakan Fort community made headlines again this week when the Bangkok Metropolitan Administration (BMA) remained adamant it will remove the century-old community to pave the way for a new public park.

Earlier this month, deputy Bangkok governor Asawin Kwanmuang urged locals in the community near the fort to vacate the land as it belongs to City Hall. He said the BMA will raze their homes if they refuse to budge.

Earlier this week, Bangkok governor Sukhumbhand Paribatra ordered a committee set up in 2015 to carry out the eviction to be changed, with him as chairman. The move is likely to delay the eviction slated for the end of this month for quite some time.

“The area should be developed as a tourist attraction, not a living community,” Pol Gen Asawin said, accusing the locals of occupying public space which is reserved as a national heritage site. "The space would be a source of income for the state."

He said documents showing ownership of the 21 plots (the land was originally granted to servants by the King) were transferred to the BMA in 1992, and that many occupants had already received compensation.

Now the dispute is focused on house ownership which is complicated because a single plot can be occupied by more than one house.

According to a recent BMA survey, there are 59 houses in the community, with 283 registered residents.

The survey showed 16 owners received 75% of the compensation but have not yet transferred house ownership to the BMA.

Three owners who received  compensation have returned to rebuild houses.

“The locals are supposed to leave the place so we can improve the landscape and turn it into a park,” he said.

The BMA launched an eviction plan in 1992 but the locals refused to leave and their wooden houses — with unique architecture traced back to the early Rattanakosin era — have been under threat of demolition several times.

Observers said the eviction was more likely to succeed this time. The BMA has taken advantage of a clean-up campaign that's backed by the junta to reclaim public space. The campaign has successfully cleared several markets including Klong Thom, Tha Chang and Saphan Lek which was infamous for its extortion racketeers.

Political issues were behind the lengthy eviction process, a source at the BMA said. Bangkok governor candidates failed to raise the eviction issue for fear it would ruin their image and diminish their vote base. Strong support from academics and civic groups was also a major hindrance to officials’ efforts to remove the community.

When officials issued an order asking the locals to relocate, NGO networks held exhibitions to raise awareness among people about community-based conservation, the source said. Seminars on the subject were held regularly. Authorities’ efforts were also hampered by political gatherings, the source said, adding supporters of former prime minister Yingluck Shinawatra and anti-government groups had rallied along Ratchadamnoen Nok Avenue where the Mahakan Fort community is located.

The history of Mahakan Fort dates back to 1793 when the King Rama I ordered its construction. The community sits strategically on the corner of the defensive Phra Nakhon Wall. It is close to Khlong Bang Lamphu on one side.

The fort was registered as a historical site in November 1949.

“If the community is authentic, the BMA will never relocate the people there," he said.

“But they cannot be classified as an old community with traditional livelihoods like that of the Ban Bat community that produces handcrafted alms bowls.”

He also cited another example, Ban Sai community, which had a reputation for making girdle cloth for monks.

Mr Sakchai said City Hall had a plan to buy a total of 21 plots inside the community and turn it into a park which would be then declared a national historical site.

In 1973, the BMA managed to buy 11 plots. But in 1992, the BMA issued a royal decree to appropriate the land and evict the community, forcing the owners of the 10 remaining plots to give up their title deeds.

Since then, the BMA has negotiated with the locals to tear down their houses or receive compensation and leave the community, he added.

“The situation is now confusing. Some residents moved out. Many homeowners lease out their houses. There's a group of residents with no right to take advantage of the situation by living in the community,” Mr Sakchai said.

The district office officials are working with schools under the BMA administration which now has 437 schools, asking them to admit children from the community into their schools following the forced eviction.

Design work for the public park is under way, Mr Sakchai said.

Walailak Songsiri, from the Lek-Prapai Viriyapant Foundation, said the Mahakan Fort community is one of the few old communities left in the city.

The city will lose all its old communities if City Hall keeps evicting people from old neighbourhoods, she said, accusing BMA officials of being ignorant and failing to fully understand the meaning of community life.

"A historic city has to be lively, not static," said Ms Wilailak. She said historic cities in Thailand fall under two types: lifeless and static like Sukhothai, or unmanageable like Chiang Mai and Ayutthaya.

The Mahakan Fort community was the home of the first likay troupe, she said. But the troupe and theatre left the community, as the neighbourhood became too small, for nearby markets after roads were built during the reign of King Rama V.

In Thailand, officials have attempted to expel residents from old communities by taking advantage of land expropriation regulations, she said.

In contrast, residents in some foreign countries are encouraged by their governments to live in old communities which are declared national historical or heritage sites.

Ms Walailak slammed the idea of replacing the community with a public park.

“How could can it be a community if there will be only structures — a fort, a wall and a park but no people who can tell the history of their neighbourhood. The place will look lifeless,” she said. 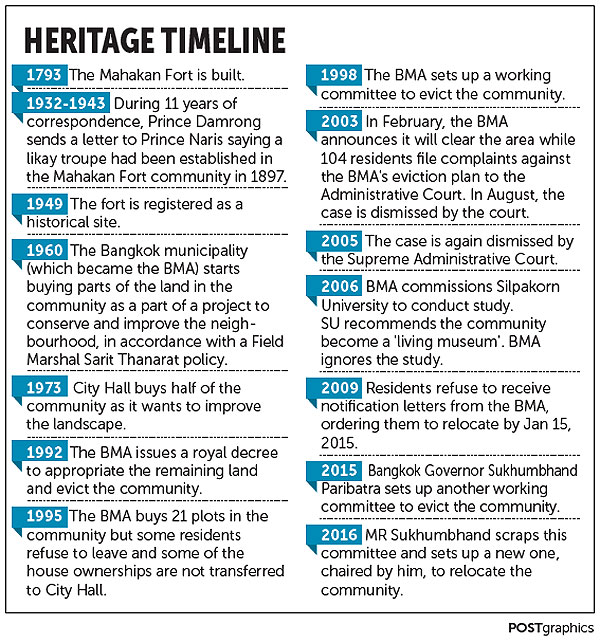 LOS LLANOS DE ARIDANE (SPAIN) - A vast river of molten lava from a Canary Islands volcano was edging towards the sea on Tuesday, destroying everything in its path and provoking fears it will generate clouds of toxic gases when it hits the water.