Farmers go back to the future to retain water

Drawing on His Majesty the King's inspiration, produce suppliers are using old methods with great results.

A small clay pot used in everyday cooking has provided the inspiration for an unusual method of ensuring not too much water, nor too little, reaches farmlands growing crops that need to be carefully monitored. 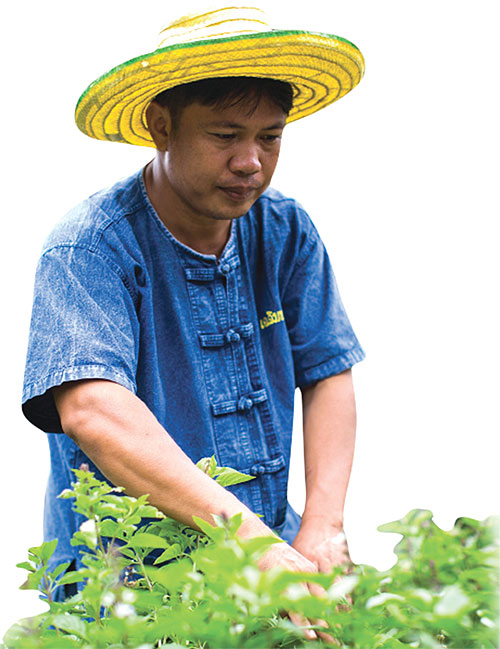 Boonlom Taokaew, left, switched from large-scale modern agriculture to a small sustainable farm with the aid of the ‘loom khanom krok’ water-retention concept. The Agri-Nature Foundation attracts farmers and others keen to build the pools to retain water in the dry season and to fight floods. Children also enjoy tree planting at the foundation. (Photos by Chevron Thailand

The familiar clay pan with loom (holes) for cooking khanom krok has lent its shape and form to water retention pools reserved for individual farms, providing valuable supplies during the drought, while acting as a buffer to flooding at other times.

The loom khanom krok, which resemble pools located close to one another, has been under experiment at the Agri-Nature Foundation (ANF) in Map Euang, Chon Buri where farmers are taught old-fashioned techniques.

The foundation says the loom khanom krok concept is an old one and is being revived. In older times, farmers would operate on small plots of land where they could easily manage their crops and control the expenses.

In one corner of the land they would construct a loom khanom krok that was filled with clear water — mainly from seasonal rain and water run-off during the rainy months — for use during the dry season. The crest of the retention pool is built high to help prevent the farm from being flooded.

However, the modern, large-scale commercial farming methods saw the end of the pool concept. Farmers expanded their farms to maximise yields and grew crops on every inch of available space. Suddenly, there was no room for the loom khanom krok.

The concept complements integrated farming methods that encourage farmers to grow a variety of crops in manageable parcels of land to avoid over-reliance on a single crop, something espoused by His Majesty the King.

Wiwat Salyakamthorn, the president of ANF and the Institute of Sufficiency Economy (ISE), said the pools are a wise water management system that farmers used for centuries, but which is now overlooked.

The pools store water to fight drought and to farm fish, which are sold to supplement the farmers' income.

He said the pools are connected to a web of small channels for watering plants in the farm.

Clay left over from digging the pools is used to erect dykes around the farm as flood diversion. Some of the clay can also be used to build an earthen house.

The trick is to make the dyke about one metre high, which helps increase water storage capacity and prevent fields from flooding, Mr Wiwat said.

This water-retention method, he said, comes in handy for farms in the Pasak River basin in the Central Plains region where water rushes out into the sea quickly, causing floods and leaving little for retention.

If the water in the basin is managed efficiently, downstream Bangkok could also be saved from floods, he said.

Campaigners have urged farmers living along the Pasak River to adopt the concept of loom khanom krok in their farms.

At the initial stage, the project was launched in response to the King’s emphasis in a speech on the value of water made on April 3, 2013, Mr Wiwat said.

His Majesty observed that it is difficult to manage water resources around the Pasak River. Water flowing through the river exceeds the storage capacity of the Pasak Jolasid dam, which holds water for farming provinces in the Central Plains.

The Pasak river basin encompasses about 10 million rai of land adjacent to a bigger basin served by the network of waterways connected to the Chao Phraya River. The Pasak River basin is characterised by steep slopes which makes the river flow quickly into the lower parts, causing flash floods that destroy farmland in the rainy season, he said.

Mr Wiwat said the basin, with its vast rice-growing areas, was mostly submerged in the disastrous flood of 2011.

“Loom kanom krok serve as a tiny dam in a farm to receive runoff in the rainy season. If we have many of them, they could hold a large quantity of water,” Mr Wiwat said, adding more than 100,000 farming families in the Pasak River basin are targeted in a campaign to adopt the system in the next nine years.

If 100,000 pools are built, about 2 billion cu/m of rain water could be retained, which is twice the capacity of the Pasak Jolasid dam, he said.

A programme was launched three years ago in which farming families mostly in the Central Plains have been taking part in training to create the pools.

Turning to integrated farming, Mr Wiwat explained the practice can help support sustainable agriculture. It is a matter of dividing up a farmer’s property into
areas to serve different purposes and reducing risks.

About 30% of farmland should be set aside for water retention, another 30% for rice growing and another 30% for growing others crops and livestock feed. The remaining 10% is designated as living area.

The land design should conform to geo-social principles to promote sustainable agriculture while also taking into account the sun and wind directions, as well as the farmer’s budget, said Phichet Somwitthayasakun, the leader of the design team for the loom khanom krok project.

“Anyone can do this if he or she knows the key design principles and adapts them to their farms. After all, farmers know best about the conditions of their farms,” he said.

Knowledge and information about loom khanom krok has been imparted at seminars and workshops sponsored by Chevron Thailand, a stakeholder in the project.

Hatairat Articharte, Chevron Thailand’s manager for policy, government and public affairs, said seminars and workshops have spread the word about the project design and raised awareness about the importance of natural water management.

Bigger is not always better, and this holds true for Boonlom Taokaew, a farmer who switched from large-scale modern agriculture to a small sustainable farm.

“Every year we used more and more chemical fertiliser and the price kept going up. We ran up huge debts,” he recalled.

The shift from conventional to traditional farming enables him to have a healthy and happy life.

“Small is beautiful. Simplicity is the best. We do not need to rely on others or the government’s handouts. That’s something to be proud of,” he said.

Mr Boonlom started rice cultivation about 10 years ago on a 20-rai plot of his ancestral land in Saraburi. He embraced chemical farming which he believed could produce quick and substantial yields to cater to the market.

To get more produce and earn more money to feed his family, he took out a loan to invest in more farmland. He rented 80-rai from his neighbors and hired workers to help him on the farm.

However, at harvest time, the financial returns fell short of his expectations. Not much profit was left after selling rice each year after the costs of pesticide and fertiliser were deducted.

“We poured everything we had into our business, but the output was not worth the effort,” he said.

Years passed and he came to realise the farming practices he had been following were not helping to improve his life.

The prolonged use of chemical fertilisers had worsened the soil quality, while the pesticides damaged the environment and human health, Mr Boonlom said, adding that he and the farmhands developed allergic reactions in their mouths and in their breathing.

The soil became “addicted” to chemical fertilisers over a long period, he said, and appeared unable to produce nutrients with them.

He said farmers live at the mercy of nature. If there had been enough rain, he would have earned enough to pay off the loan.

Mr Boonlom said he endured the hardship for a few years. But the turning point came after he attended the programme “The Power of Human Energy: A Journey Inspired by the King”, run by jointly by the ISE, the ANF and Chevron Thailand.

Mr Boonlom thought the session gave him a glimpse of light at the end of the tunnel.

It was at the ANF that he learned about loom khanom krok, which opened up a new perspective on farming.

This type of water management can beat drought and make the overall farming situation more tolerable, Mr Boonlom said, adding the water retention pools feed the many vegetables he grows, including kana (Chinese kale) and Chinese cabbage, on mounds he has created on his farm.

There is an ample supply of water stocked up from the previous rainy season.

Mr Boonlom explained that the loom kanom krok system may not reduce production costs or increase profits. However, it does help him cut household costs, which augment the family’s savings.

On top of that, he enjoys greater independence. He manages the 20 rai of farm he owns without having to hire workers.

“We stand on our own feet. We sell our produce at the market and with the money we get, we put food on the table and send our kids to school. We’re also debt-free,” he said.