A raunchy dance routine has enraged the country's cultural guardians, but 'pretties' bolster their careers by causing a stir.

THE LATEST MODEL: Marketers take advantage of the lenses being trained on the shapely pretties rather than the curves of the cars at the Bangkok International Motor Show, which ends today.

Ladapa Ratchataamonchot first tried breaking into the entertainment industry in university, travelling to Bangkok during her holidays in search of part-time work.

She started off slowly, securing jobs as a hired audience member on TV shows before graduating to a paid extra on several TV series.

But it was an offer to model for a men's magazine that would change her career trajectory.

The actress had grown a loyal following among Thai men, but last weekend her fame reached new heights.

Along with dance partner Abhisit Sae-eung, a bikini-clad Cherry performed a sexually charged routine at the Bangkok International Motor Show. Complete with a soundtrack of loud moaning, the show left little to the imagination and spread quickly online.

It all proved too hot for Prime Minister Prayut Chan-o-cha, who called for legal changes to allow stricter controls on scantily clad models and provocative performances at car shows. "This is a matter of individual conscience and one should never claim she has to do such an immorally wrong act for money," Gen Prayut said.

Cherry and Abhisit were fined 1,500 baht each, but the show ignited fresh debate about the sexualisation of motor show events.

DANCING UP A STORM

When Spectrum contacted Cherry last week, she was hesitant to talk about her controversial performance, saying she didn't want to be famous for negative reasons.

But she went on to defend the routine, saying she believed it was within the bounds of artistic expression.

“I’m not one of the pretties who promote a product. I was hired on that day specifically to perform one sexy dance routine as a guest star,” she said.

“When I rehearsed the dance routine it was a lot sexier, and I truly believe this is a form of art. I didn’t know that it would offend people like this.”

Cherry said she was pleased with her performance, which she thought "went well", and said she got along beautifully with dance partner Abhisit.

But she felt remorseful that so many people had found it inappropriate.

“I’m sorry that I have wasted everyone's time on this matter," Cherry said.

"I will be more careful next time before I accept a job like this.

"I have my own limits when people hire me to do this kind of event. I have done sexy car washes and bikini modelling, but I have never done any public nudity as I would be charged by the police.”

While Cherry has taken most of the flak in the wake of the dance, the routine was actually the brainchild of Pranaya “Pang” Pleankim, 29, a marketer who organised the show.

Ms Pranaya told Spectrum she looked at the product — Mirage car sound systems — and analysed it with a marketing team before coming up with the idea for the dance. 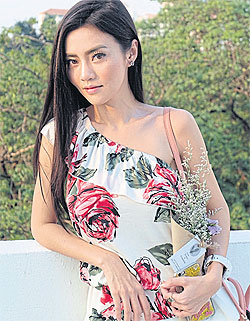 The team chose to play on the term "AV" from their client's product. Ms Pranaya noted that as well as standing for audiovisual, AV can mean adult video. Since men were their target audience, the team leaped on the AV idea. And when talking about Thai AV stars, there are none more famous than Cherry Samkhok.

Ms Pranaya said, like any marketer, she wanted to grab people's attention. But she never expected the show to go viral the way it did.

“I am in the marketing team myself. Trust me, no one wants to have bad publicity," she said.

"I respect Cherry as a professional performer, and she did absolutely nothing wrong.”

The Mirage speaker booth late last week had a lot more visitors than usual, most likely buoyed by the recent media attention. The "pretties" working there all wore revealing costumes, each of them surrounded by at least 20 men taking photos.

With more than a decade of experience managing successful events, including motor shows, Pornpasorn Chua, the managing director or the Bunjerd Co Ltd, said going viral is the hidden goal of any event organiser.

The most successful event — especially large-scale ones like a motor expo — is one that gives people something to talk about. Cherry’s video, she said, is a prime example of how social media can help determine the marketing and PR value of a product.

“The fact that people take a short video clip and share it online is more than good enough to promote the product," she said. "We all know that it can create traffic at the event. If it goes viral, that will be a big bonus.

“Pretties are trained to love the camera and the photographer. At the end of the day, these people will make the product better known and can create viral marketing. At this kind of event, especially car and gadget shows, around 70% of the foot traffic will be men coming in to look at the pretties.

"We have to find ways to make the event look interesting and fresh. Some might prefer 'user experience' activities, while some want nothing but pure entertainment.”

Nansinee “Tangmo” Chaowalit has been interested in the world of "pretties" ever since she was young. At age 14, she applied to work as an MC for a small event at a local convenience store in Nakhon Si Thammarat. Although her family was not struggling for money, Tangmo said she wanted to work simply for the joy of it.

These days Ms Nansinee, now 26, is a professional MC at many major events. She doesn't have the "complete package" like other pretties, she said, referring to her relatively small bust size. But she said other pretties who can’t do MC work will often need to have cosmetic surgery done, particularly to their breasts, if they want to earn more money.

Nansinee said she has never done anything extra to her body, since she prefers to present herself in an elegant way. This is one of the reasons that allows her to secure work with top-tier brands that generally shy away from using scantily clad models.

Still, she sees nothing wrong with other women who prefer to walk their own sexy path.

“Each person has their own way. There is no black or white for me," she said. "I have a certain look to maintain, while other people are doing the same thing."

Parepilai “Pare” Dutsdeesopaporn, a pretty for BMW who earned the title of "Miss Favourite" at this year's Bangkok International Motor Show, told Spectrum she has to maintain a professional look at all times.

Sexiness is part of the job, but Parepilai makes it clear that she won't wear anything revealing. Instead, she said, sexiness can come from knowledge and attitude.

In a large exhibition hall with hundreds of pretties gathered together, there are some fine lines that can separate them from each other. Those representing premium car companies are called “models” and must look neat and professional, always wearing high heels even when they go to the bathroom or have lunch.

Meanwhile, the pretties on the far side of the hall, representing mid- and low-tier brands, are called the “dairy farm” due to their enormous breast size and revealing dresses.

They are not paid equally. Motor show pretties can earn as little as 1,000 baht per day for the 15-day event, or up to 3,000 baht a day if they perform MC duties. But the premium car companies can offer their models at least 50,000 baht for the whole event.

Supathra “Pupae” Srisuwan, 23, one of the four Alpine girls whose dance at last year's motor show went viral, is back again this year.

“It’s only a matter of choice. I have my own limits of what I will and I won't do. I am sure Cherry does too," she said. "She is not a pretty, she is a sexy model. What she did is what she does for a living anyway. I really don’t see why people think it is too much.”

Naiyana Supapung, the coordinator of the Teeranat Kanjananusorn Foundation, which focuses on women's rights, said society needed to consider why women were being held to different standards as men.

In the video clip, she noted, Cherry was dancing with a shirtless Abhisit, but it was only Cherry who was drew public condemnation.

“Why don’t we ask the same question of men: whether or not it is appropriate to express their sexual needs in public? When males do it, it is considered a heroic act and that person earns respect. But when women do it, like in Cherry's case, we blame her even though they both did it at the same time,” Ms Naiyana said.

She said Thai society imposed culture control to force women to act a certain way. Women have to be shy, polite, quiet and are unable to express their sexual needs, she said.

Meanwhile, men are given ample space to express their sexual desires, and they are able to get away with being loud and impolite simply by virtue of being male.

"She is just a woman who is being used by marketers to serve their purpose.

“Why is Thai society scared to discuss sexuality while it is OK to portray sexy images in advertising? It is a kind of conflict, that we do not want to promote sex yet sex is always used as a tool to promote products or events.”

DRIVING THE DISTRACTION: With models and pretties bringing in about 70% of the foot traffic, car companies are competing for attention. 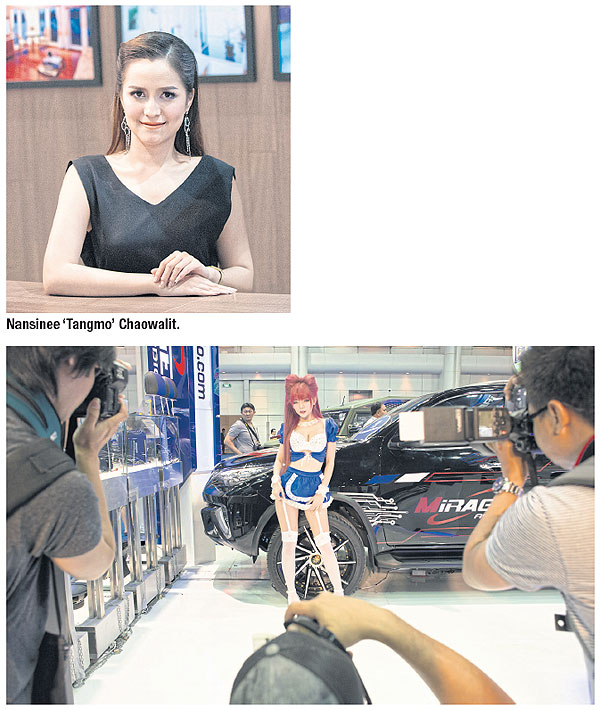 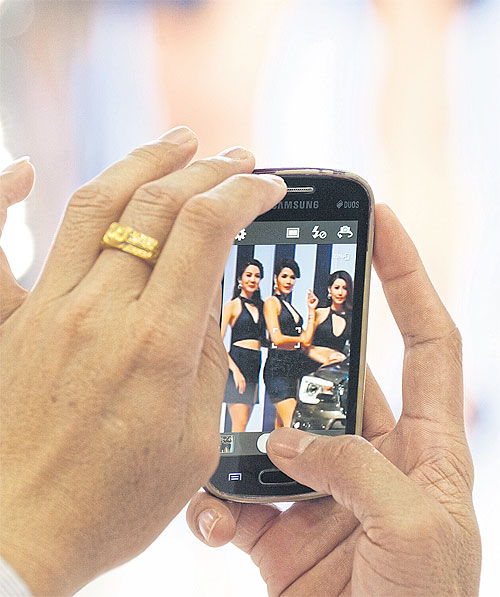 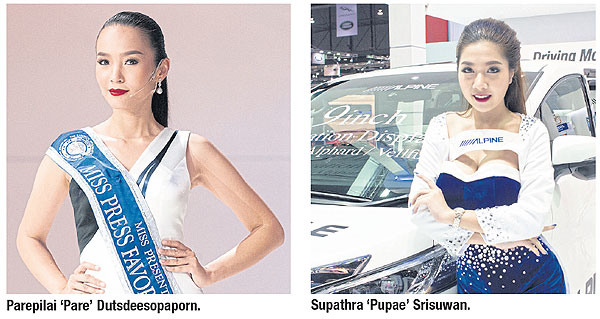 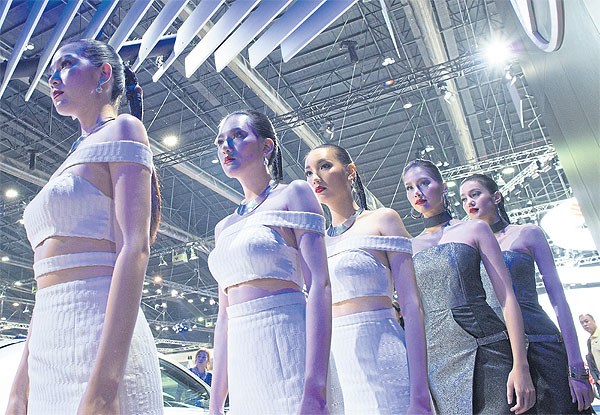 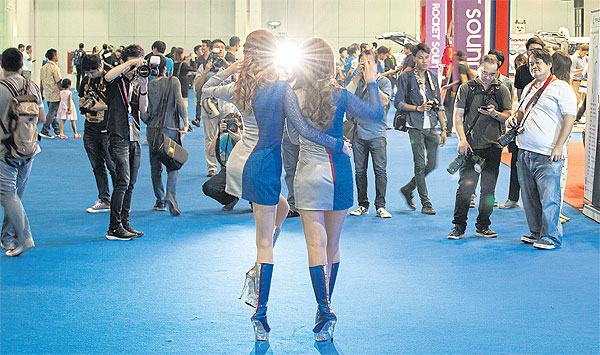 Covid curbs to be relaxed